Where To Stay in Doha: Sharq Village and Spa 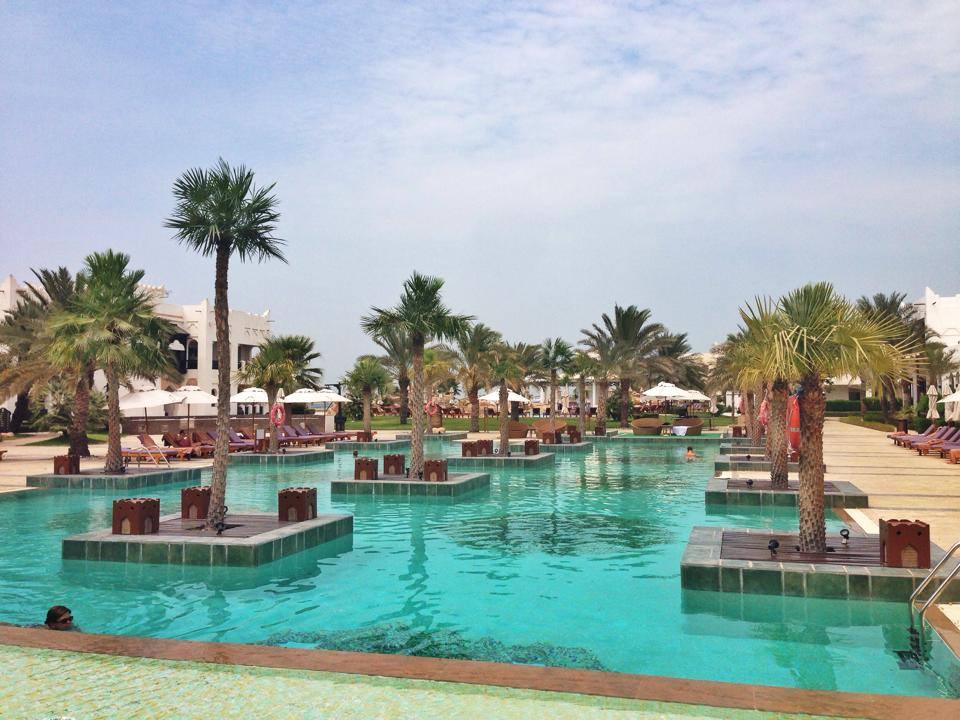 For the majority of people living in Dubai, the idea of having a weekend getaway in Doha is rather crazy. I belong to the majority as I do certainly believe that the rest of the GCC population come to Dubai and not the other way around during the long week holidays like what we have now, the Eid holiday period. That idea quickly changed when I got an invitation to stay at the Sharq Village and Spa in Doha which is operated by the Ritz Carlton Hotel Company. When I received the invitation, I visited their website and as soon as I saw the photos of the lavish hotel I can only utter: Oooohhhh la la!!!! It was amazing and the photos look very tempting. I confirmed my dates immediately and the whole booking process was done in a matter of 24 hours.

I boarded a rather empty flight from Dubai to Doha last Friday to spend a weekend at the Sharq Village and Spa. We were only 13 in the plane with a capacity of 307 passengers, that empty. It’s like the flight was proving a point that nobody goes to Doha for a holiday. LOL. We arrived at the very modern, very new and very empty Hamad International Airport at around 11am and the immigration procedure was a breeze. From the airport, Sharq Village and Spa was a mere 15 minutes away. The moment I stepped into their luxurious and spacious lobby, I knew I was in for a treat. 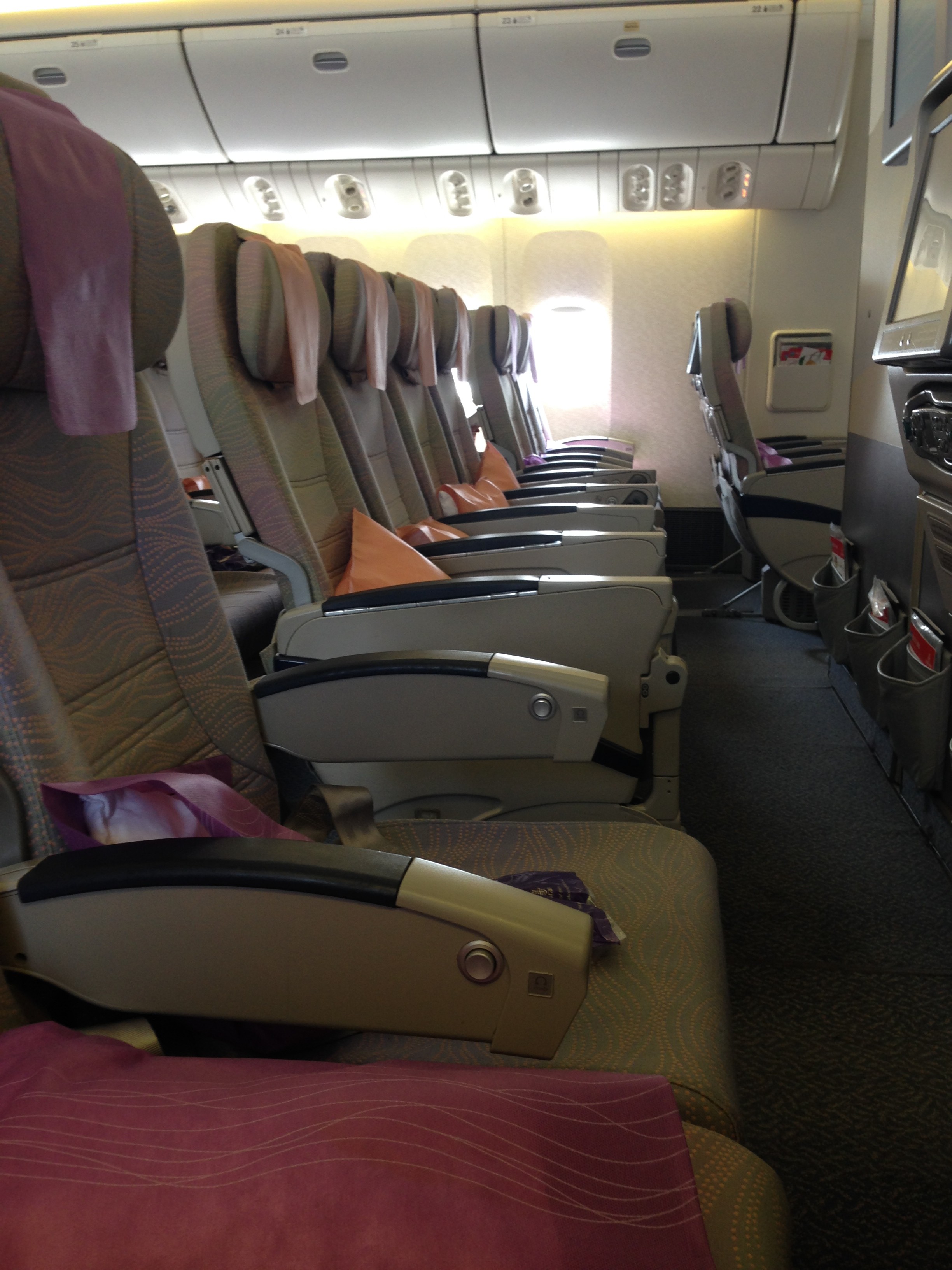 Don’t you wish you’ve got all these empty seats during a long-haul flight? :p

The check-in process took no more than 10 minutes and we were immediately led to our Deluxe room facing the pool. The rooms are located in individual villas each with a small courtyard in the middle, it mirrors the community-building dynamics of the Qataris. The villas are secured by heavy wooden doors, the authenticity of the Arabic design of the whole property just makes me giddy. The room was magnificent and looks exactly like the photos. In the middle of the room was a four-poster bed with the most comfortable mattress, pillows and comforters I have ever had the chance to lay on. I made a mental note to have only 400-thread count down comforter, duvets and linens such as the ones that they have in my house, if I can afford it. The full marble bathroom was just as elegant, I made a short happy dance in it as soon as the staff who showed me the room walked out. 🙂

Hallway of each individual villas 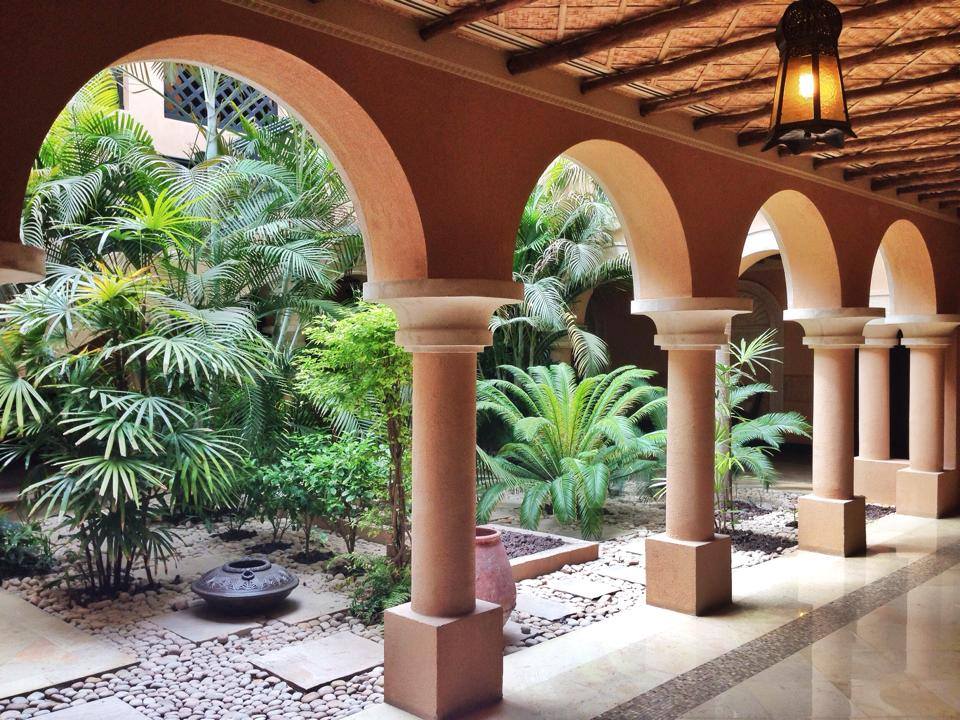 Courtyard in the middle of each villas. 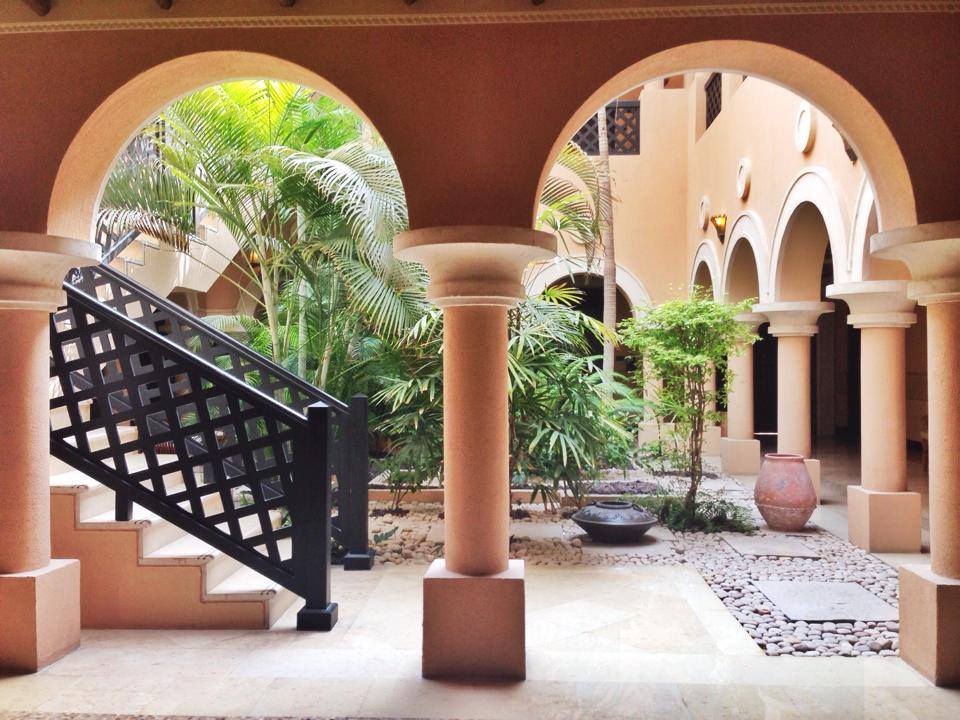 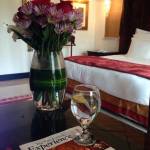 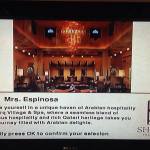 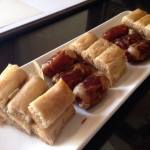 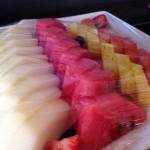 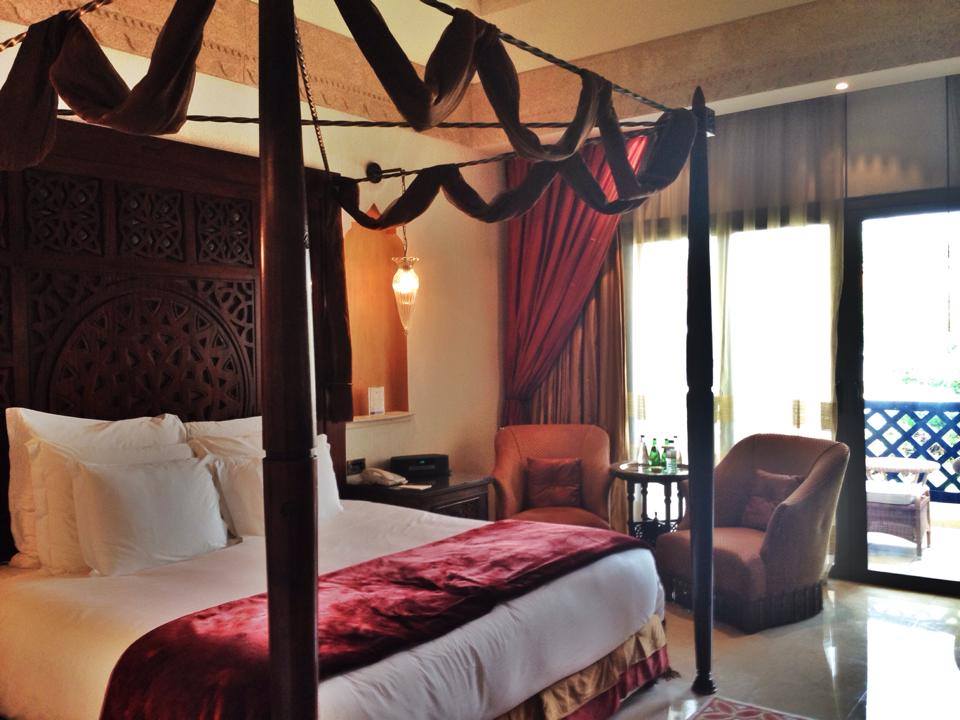 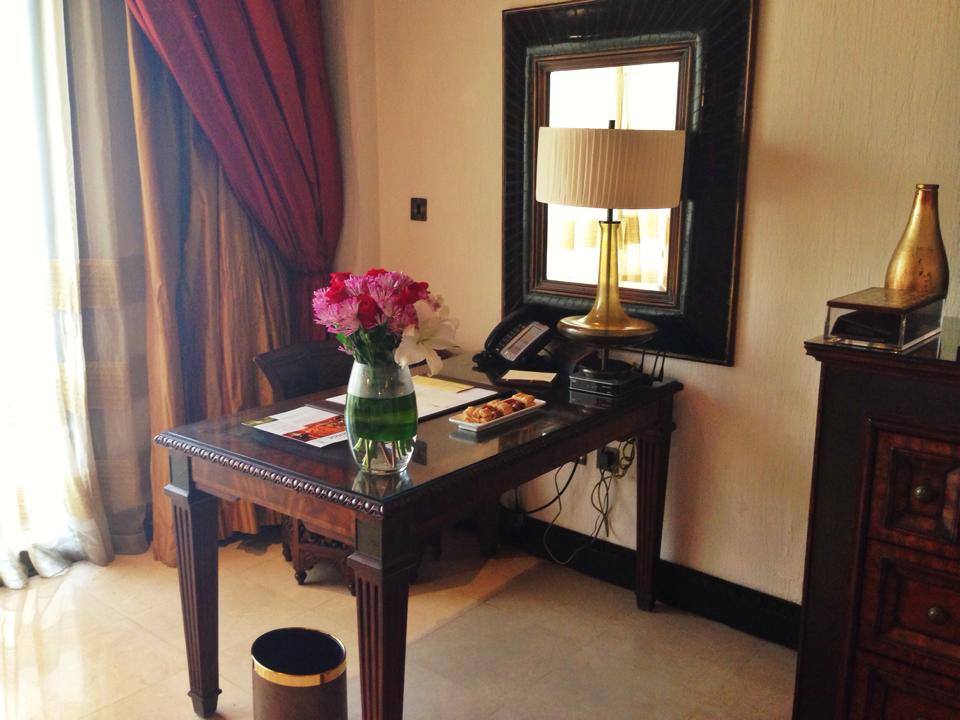 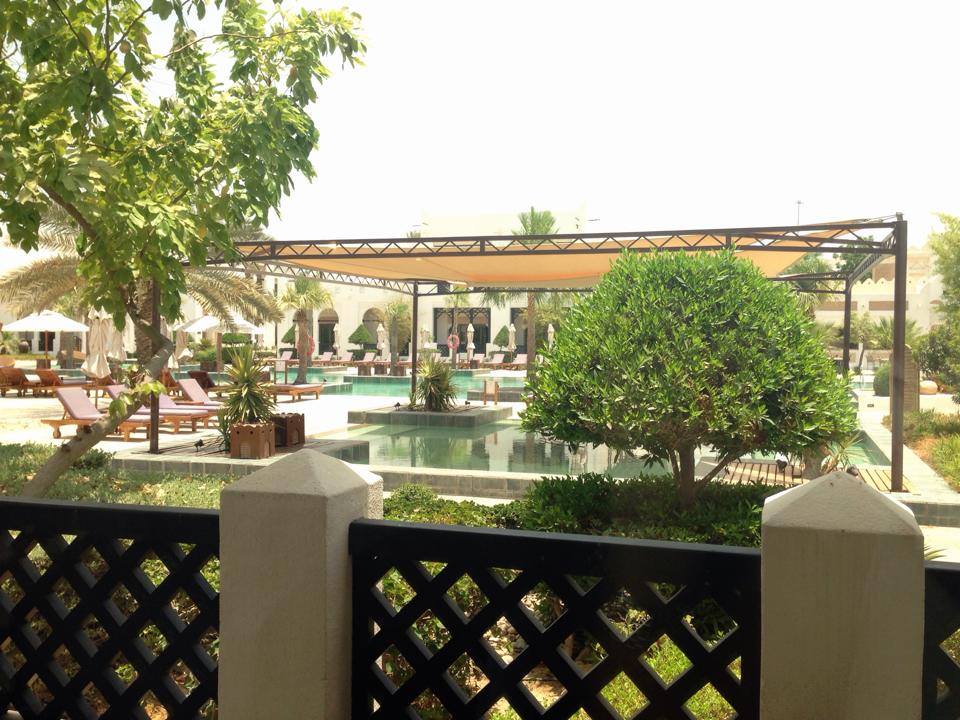 Pool view from our balcony 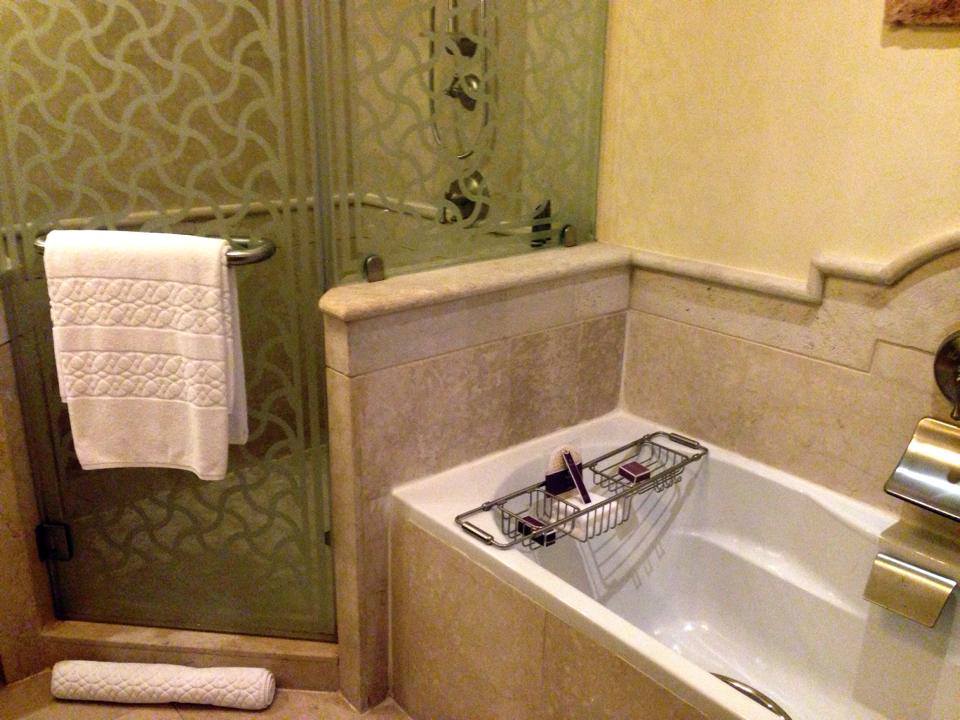 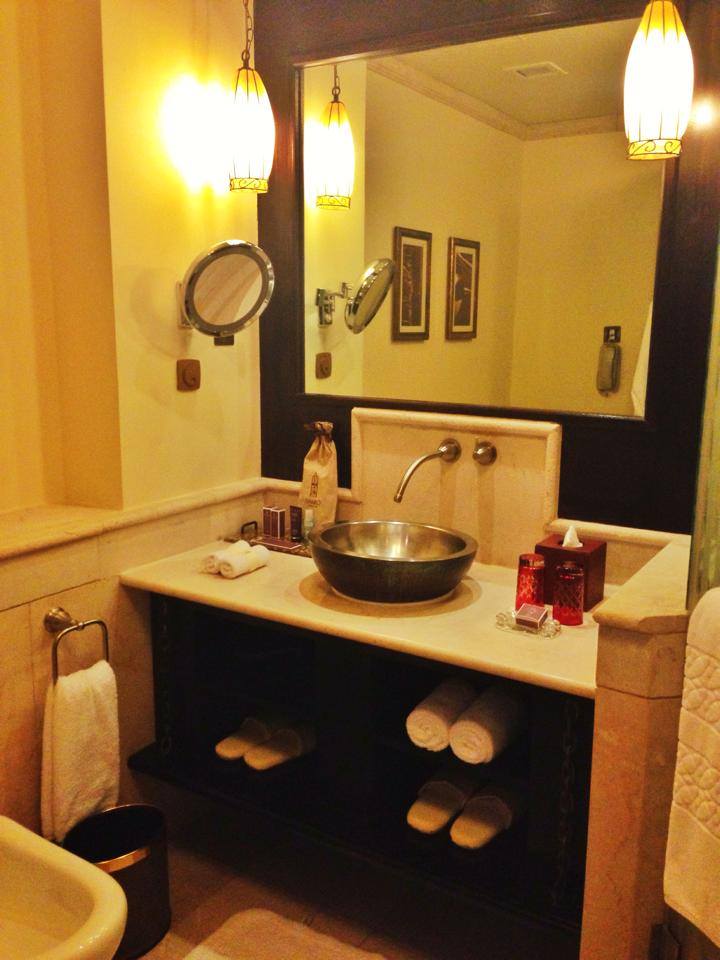 After much fussing about in the room, we went outside to explore the resort grounds itself. The Sharq Village and Spa was designed to look like a traditional Qatari village with a maze of alleyways. Small courtyards adorn the village in every turn that you’ll make – it’s charming and traditional in a very luxurious way. The pool which we had a view of from our room was majestic although smaller than what I have expected from the photos that I saw. I went to the beach and as I expected, it wasn’t up to my standards. This is coming from a girl who grew up in the Philippines which has about 7,107 islands with pristine white sand beaches, so you do get my point yes? Suffice to say, I skipped the beach altogether just as I normally do whenever I visit a resort in this region and spent most of my afternoon lounging by the majestic pool as I try to finish my book. Just to be clear, I’m not saying that the beach at Sharq Village and Spa is crappy, I’m just not generally impressed with the beaches in this region – being an Asian girl. 🙂 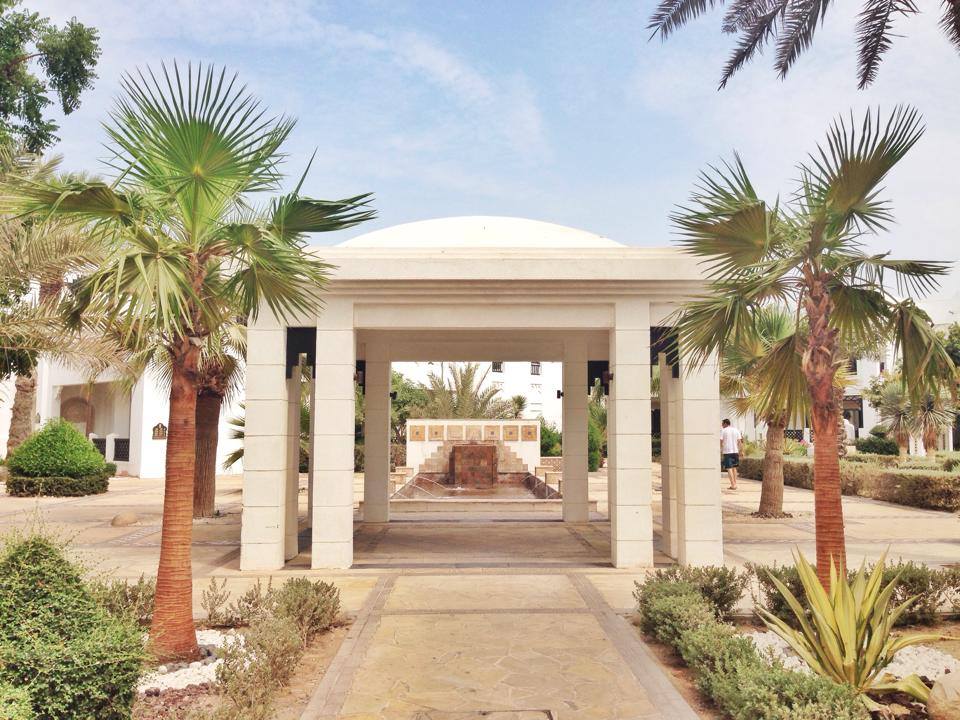 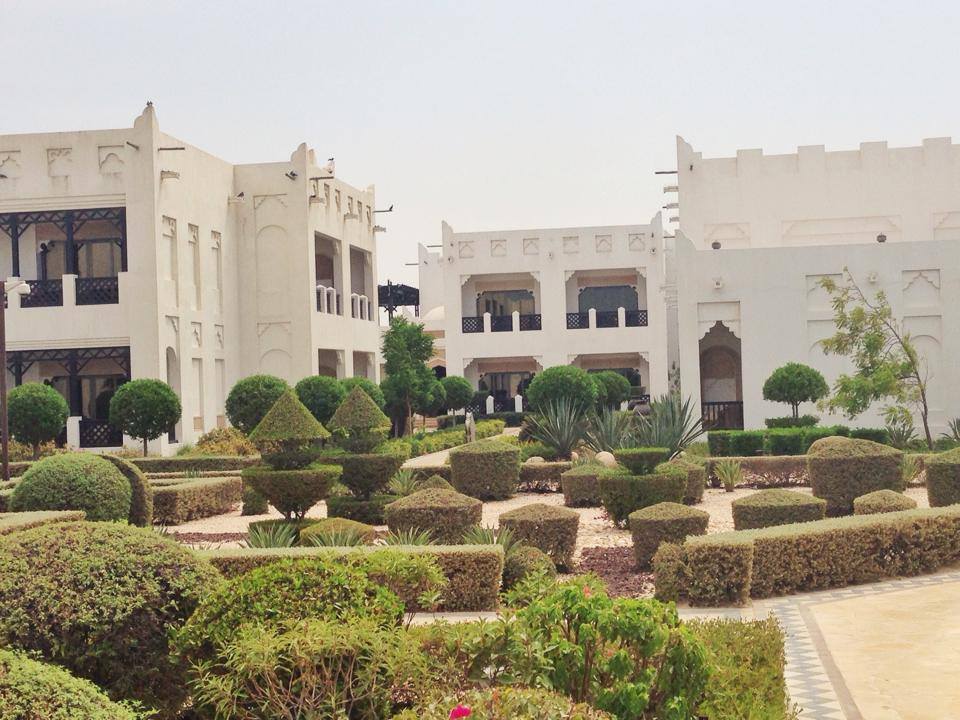 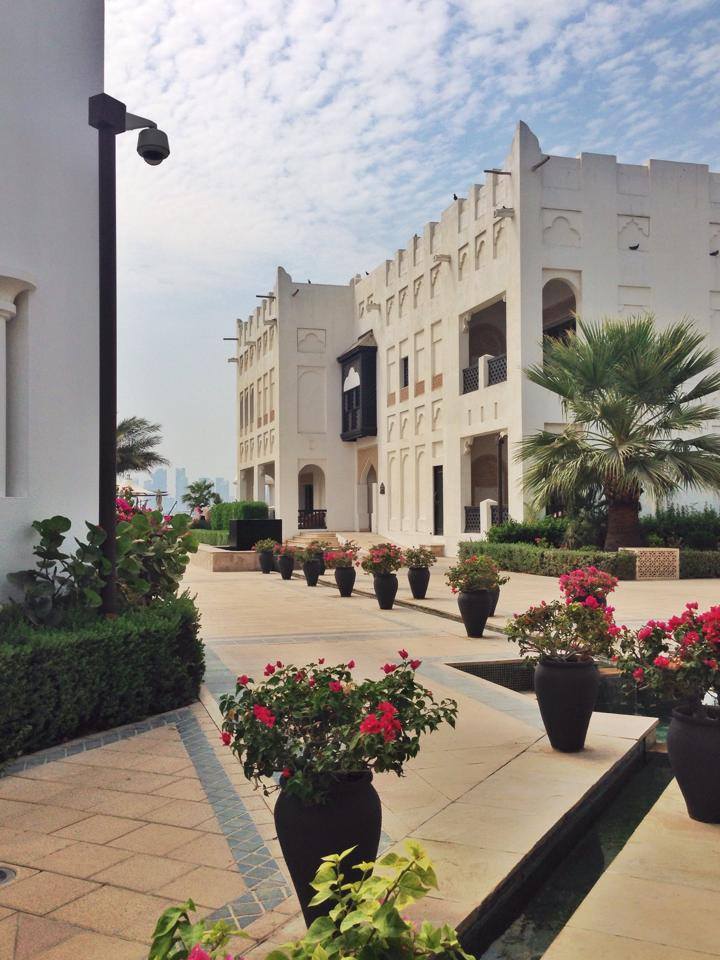 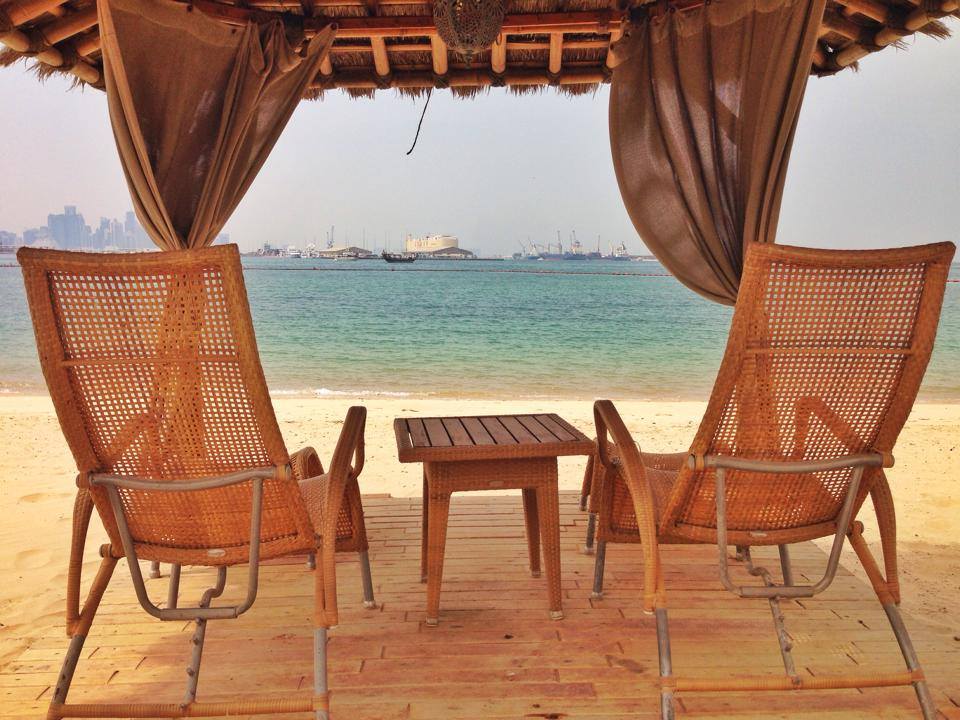 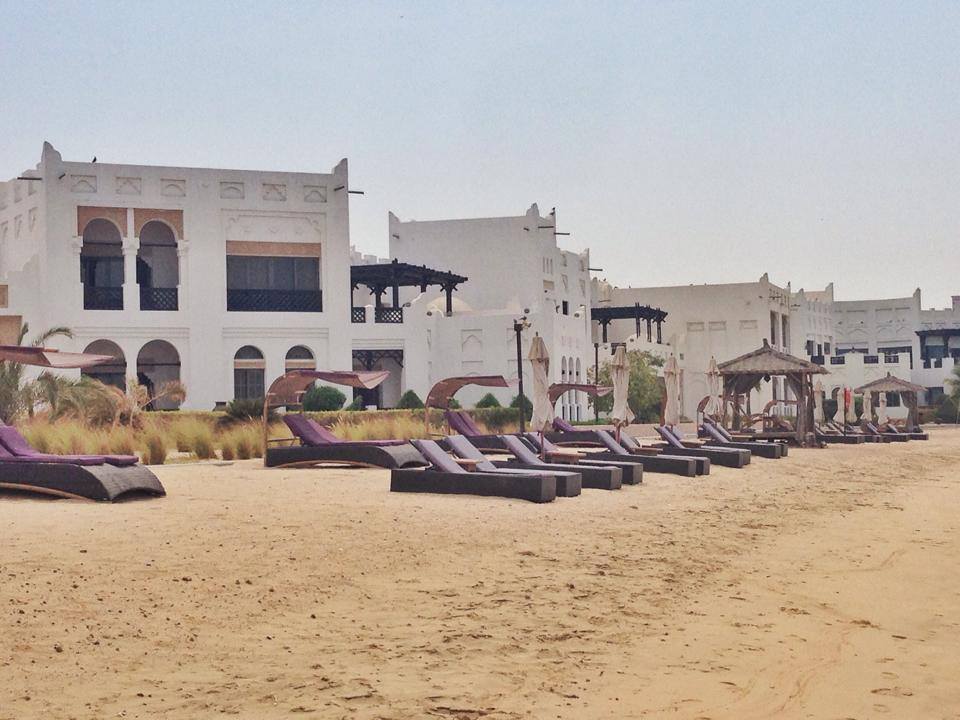 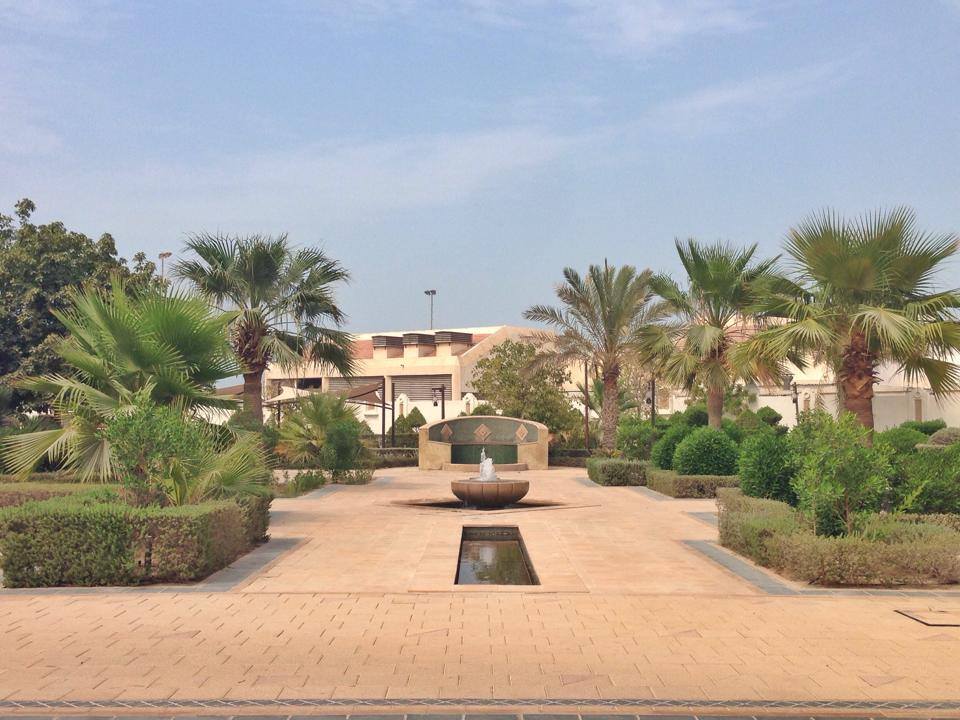 I was able to try out Sharq Village and Spa’s in-house Six Senses Spa on the first day and I must say that it’s probably the highlight of that luxurious weekend for me. It deserves to have a separate post though so you’ll just have to wait for that. 🙂 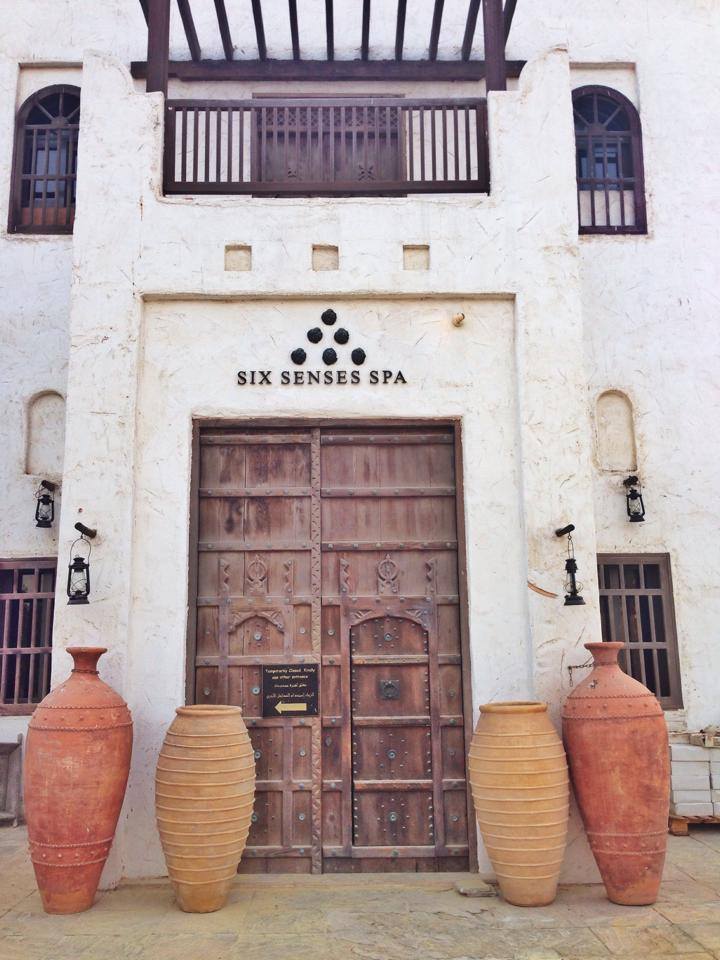 As it was still Ramadan when we were there, there were only two restaurants operating inside Sharq Village and Spa. Al Liwan is their main restaurant which serves breakfast, lunch and dinner. Parisa is their only specialty restaurant which was open apart from Al Liwan, it serves Iranian cuisine and I must say that I’ve had a taste of the best grilled meat in Parisa. Again, it deserves a totally separate post and if you’re a foodie or you just love to eat great food like myself, you’ve got to watch out for that post. 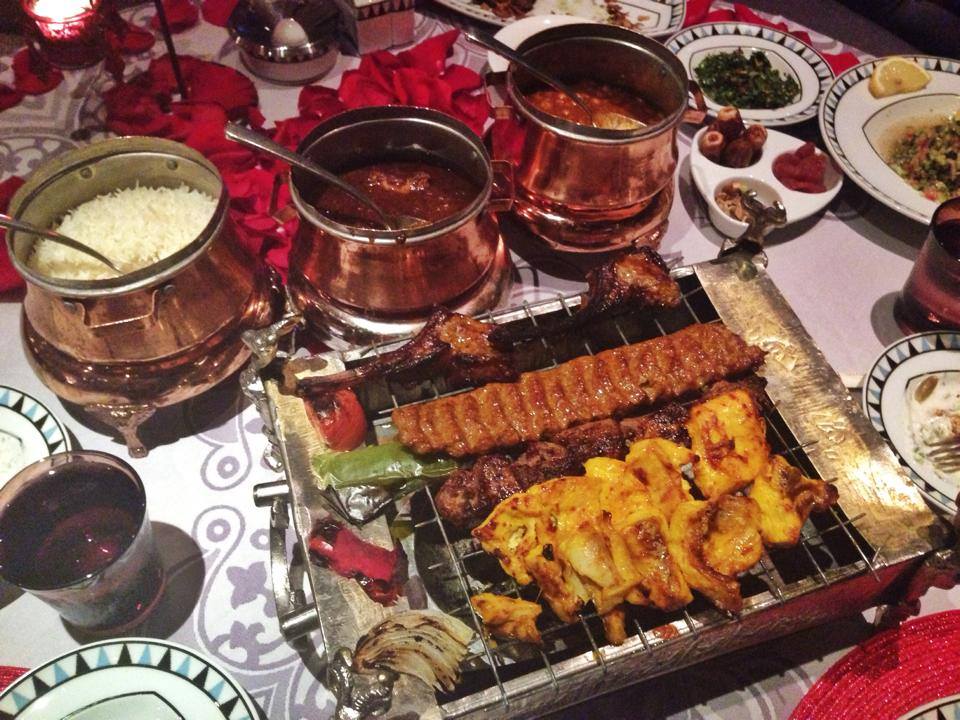 Our delightful feast at Parisa.

The breakfast they served at Al Liwan was a la carte as it was Ramadan. It’s not really something to complain about but I was hoping to experience their breakfast buffet. During our first breakfast, they served a rather cold ensemble of pastries, omelet, hashbrown and mushrooms. I have made a comment on it that same day and the result was a hand-delivered note with flowers and a fruit tray to my room. WOW! I wasn’t expecting that as it wasn’t really a complaint, I merely just made a comment as I have finished everything on my plate anyway. We had our lunch there twice and both times, the food they served was perfect! Their pasta in mushroom sauce is something I would really recommend. 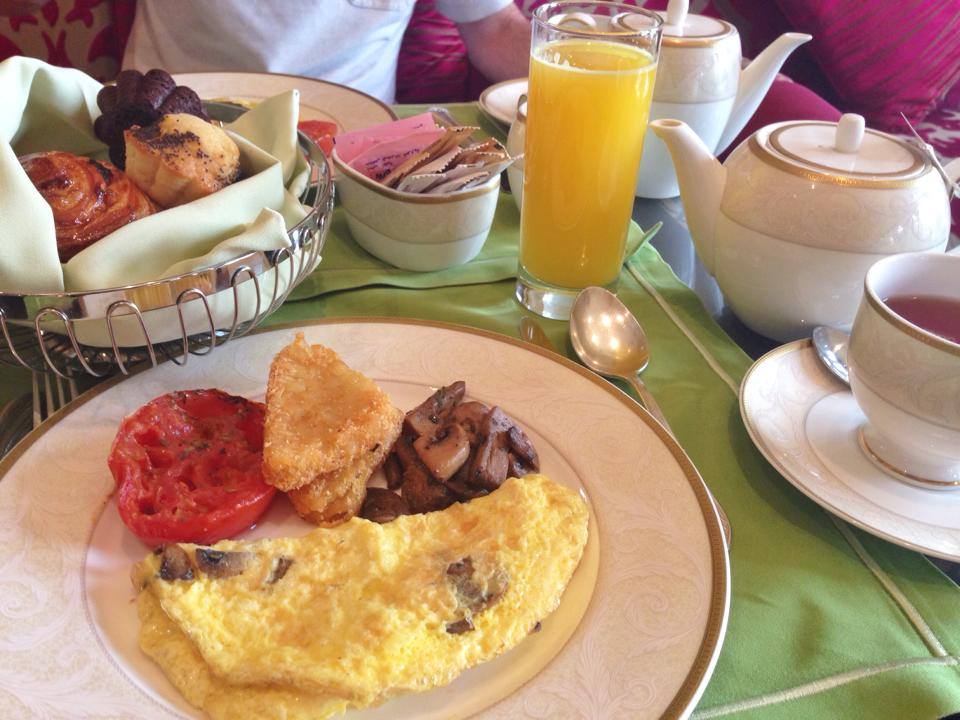 On our last night, we joined their iftar dinner at Al Liwan. The iftar buffet spread was amazing with a myriad of food choices ranging from Arabic salads and main courses, grilled seafood and meat and of course – the ouzi! The iftar made me even more disappointed that I won’t be able to experience their breakfast buffet spread. 🙁 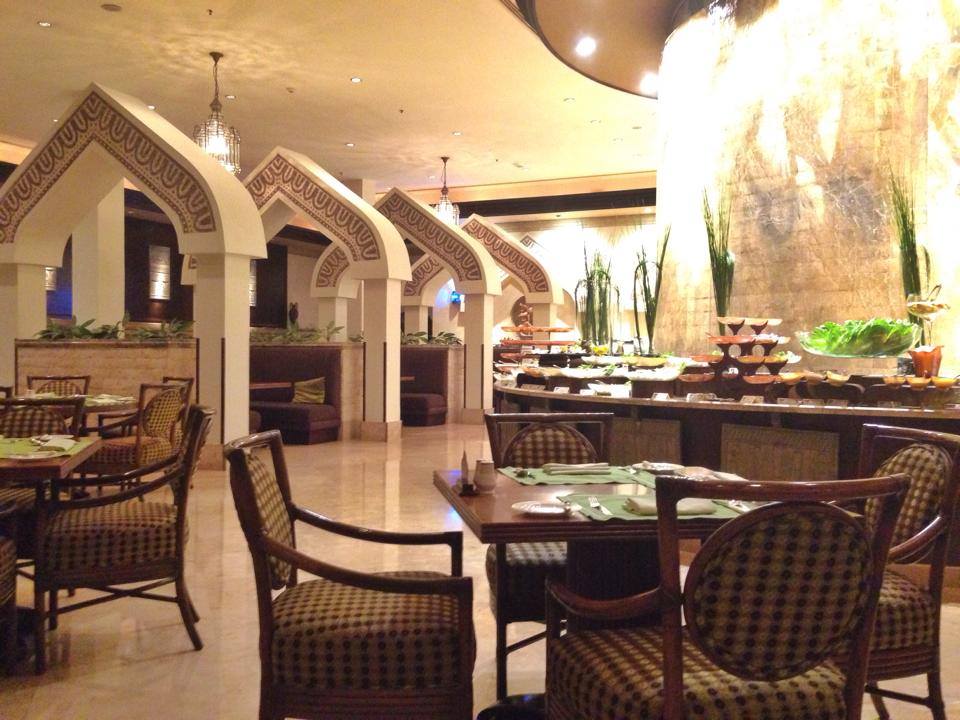 On my last day, I ordered an in-room breakfast to try it out. The food was delivered in minutes and was served piping hot. It was a sweet ending to an already perfect weekend. 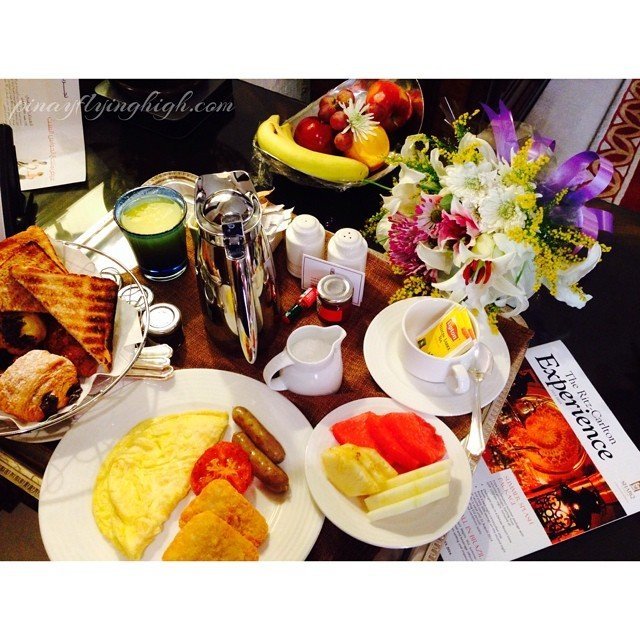 I was treated like a royalty the whole time I was there, it made me uncomfortable at first as I was under the impression that they were treating me differently from the other guests since they know that I’m a blogger staying there. I’m not used to that kind of attention specially since I don’t think I deserve it, LOL. I later realized though that they were treating all of the guests the same way as they were treating me. I must say that the hospitality and great service of the staff made my stay a lot whole nicer. A simple question becomes a request which was immediately solved in a matter of seconds, nothing is impossible for them to do if it will make your stay more enjoyable and more comfortable. I will have to commend Jenny, the pro-active telephone operator who always went out of her way and treated me like a royalty during my whole stay. They’re all remarkable, really. 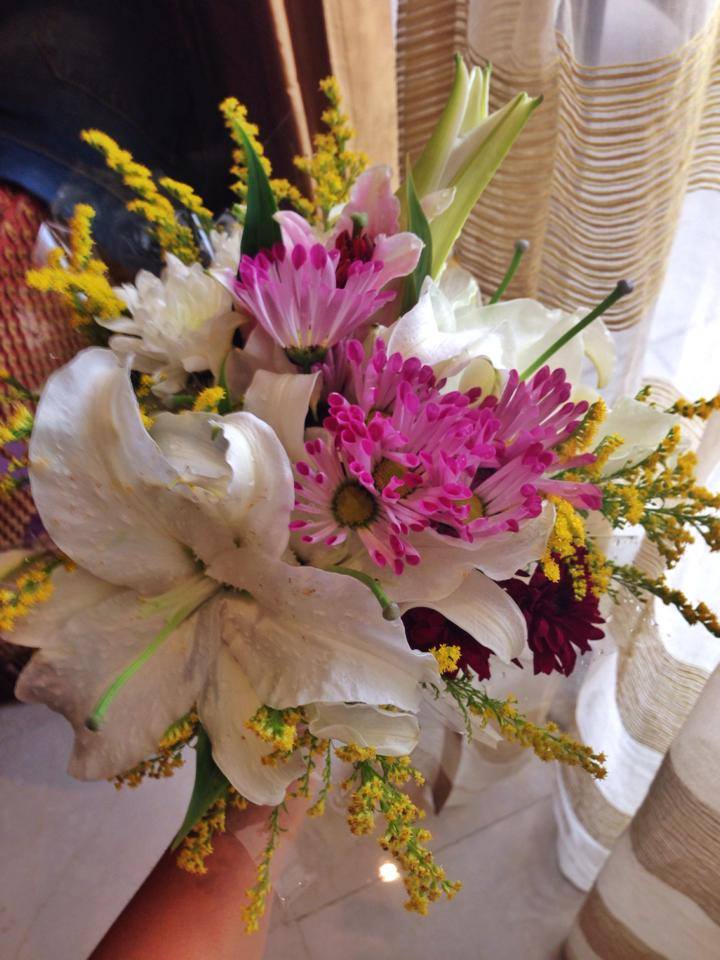 The hand-delivered flowers by one of the staff to apologize for the comment I made, I was so humbled by the gesture.

Doha is not a place you go to for a weekend, most definitely not specially if you live in Dubai. That is the case UNLESS you’re planning to stay at Sharq Village and Spa. That property is a destination on its own that you should definitely explore. I certainly had a change of heart about Doha after this weekend, here I thought only Dubai caters to the incredible luxury resort properties.

Note: I was a guest during my stay at Sharq Village and Spa however, opinion and photos above are my own – as always. All photos were taken by my iphone5.