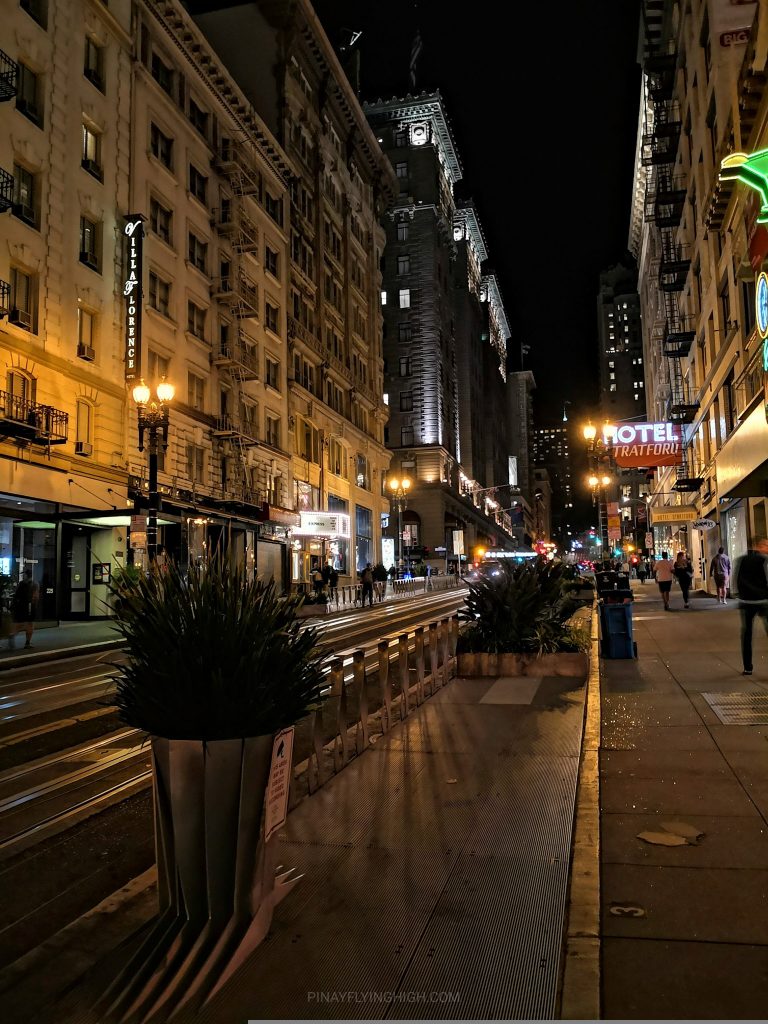 The San Francisco I remember from our first visit five years ago has done a 180-degree change for the worst. I was heartbroken. :(

Finally, we’re checking out of our dingy hotel room but will sadly be leaving Monterey. Before that though, we had breakfast at Lou Lou’s Griddle in the Middle – another one in my list of places to eat in Monterey. We were lucky enough to get a table right away but shortly after us, there was a long waitlist already.

I ordered the pancakes and the waiter asked if we’re going to share it. I said no because The Greek Mister wanted to have a wharf wrap. I should have taken that question from the waiter as a hint because the pancake was bigger than my face when it arrived. It doesn’t even fit in the plate that it was served on. Lol. We were sitting on a table outside and every person who passed by us and saw my pancake wished me luck. Lol. It was good though, I was glad we had our breakfast there.

Afterwards, we did the 17-mile drive – a scenic road through Pebble Beach and Pacific Grove. There’s a USD10.50 per car fee before you enter which includes a map with information about the stops. Not that you would need the map because there’s google anyway. There are a total of 17 viewpoints along the way but my favourite would be the Lone Cypress only because it’s a pretty spot to photograph.

From here, the drive to San Francisco would take around 3 hours and as soon as we entered the downtown area of San Francisco it felt like we’ve entered a different dimension. It wasn’t the San Francisco that I remember and loved from my visit 5 years ago. It has changed a lot, a complete change. Homeless people were everywhere and most of them, as sad as it is, were obviously on drugs. Both The Greek Mister and myself were taken aback by it, I personally didn’t feel safe as we cruised along the streets where tents were pitched and there’s clearly a camp/community of homeless people established.

We reached our hotel Parc 55 San Francisco and was advised that parking is USD75 per night. I had to stop myself from screaming expletives to the valet person because it’s not his fault that it costs that much -. The Greek Mister suggested that I stay in the hotel while he looks for a parking garage, I guess he felt safer driving around by himself – at least if anything happens, he’ll only have to lookout for himself.

It was still daylight when we arrived San Francisco and yet, we were already afraid to walk around. The hotel that we stayed at previously was only a couple of blocks away which was the reason why I chose this area. I don’t remember having had any difficulties when we stayed in the same area 5 years ago, we even walked home in the middle of the night after dinner then. And yet, the sun’s still up this time around and I didn’t feel comfortable going out the comforts of our hotel anymore.

When the Greek Mister came back after finally finding a parking garage, he told me that he passed by an alley where there was a gang of people in the middle of the road. He didn’t honk, he didn’t make eye contact or anything that would otherwise suggest that he’s asking them to move. Instead, he just sat there and waited for them to move. At that time, he told me that he was ready to give them everything (including his underwear) just to get out of there alive.

Don’t get me wrong, there’s also a homelessness problem in London but it’s not as huge as it is a problem in San Francisco. I did a bit of research, San Francisco’s total homeless population in 2019 is 9,784 and is the highest in Bay Area. There’s a 30% increase compared to 2017 which explains why the city looked so different to me now compared to when I visited it in 2014. It is disheartening to see, the city that I fell in love with the first time I saw it has done a 180-degree turn for the worst. What’s more bothersome is, as soon as you’re out of the downtown area, it all becomes very hip and happening again. The gap between the rich and the poor is so huge that you just can’t help but wonder – how did this happen and how is it even possible?

I genuinely feel sorry for them, while it’s kind of scary to walk through the streets where they have encamped – I also felt guilty for feeling so. I remember seeing in the news, a report about a homeless guy who graduated from Yale and was once a Wall Street Banker. Life turned out sour for him at some point and lead him to being homeless. If it can happen to him, it can happen to anyone. And the fact of the matter is, nobody deserves to be homeless.

Anyway, my brother-in-law met us up at the hotel and we all ventured out for dinner. Our destination for the night was Ryoko, a Japanese Restaurant just a couple of blocks from where we were. There was a line outside when we arrived but we’re all to lazy too fall in line so we just had our name listed down and went to a nearby bar for drinks as we wait for the text message that our table was ready.

The restaurant was buzzing when we were seated, we immediately ordered multiple plates of sushi to share which all came quite quick and all tasted so good! I can still remember how great the crispy salmon skin roll tasted which ultimately became the highlight of our meal for me.

After dinner, my brother-in-law wanted to take us out for drinks but at that point in time – I was already beat. I think I had too much to drink during dinner (lol) and add the tiredness from all the driving that we’ve been doing the couple of days with jetlag – I couldn’t possibly go out that night anymore. We went back to the hotel and I went straight to our room while they had their drinks at the hotel’s bar. It was the best sleep I’ve had during this trip, I guess the alcohol worked its wonders. Lol.