Ships Loaded With Tourists and The Best Dining Experience in Santorini. 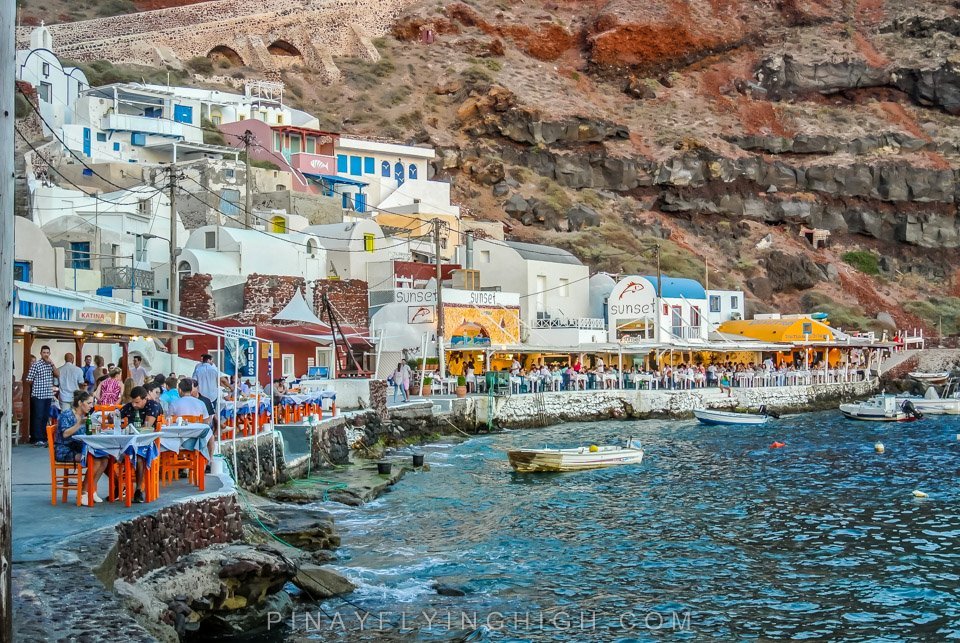 Our breakfast was delivered and set-up on our balcony. It was our second day in Santorini and the lady at Kiklaminos Studios and Apartments was taking good care of us since the day we arrived. Croissants, hard-boiled eggs, marble cake and some fruits were offered with orange juice and coffee (which none of my co-travelers liked because it wasn’t strong enough to wake them up). 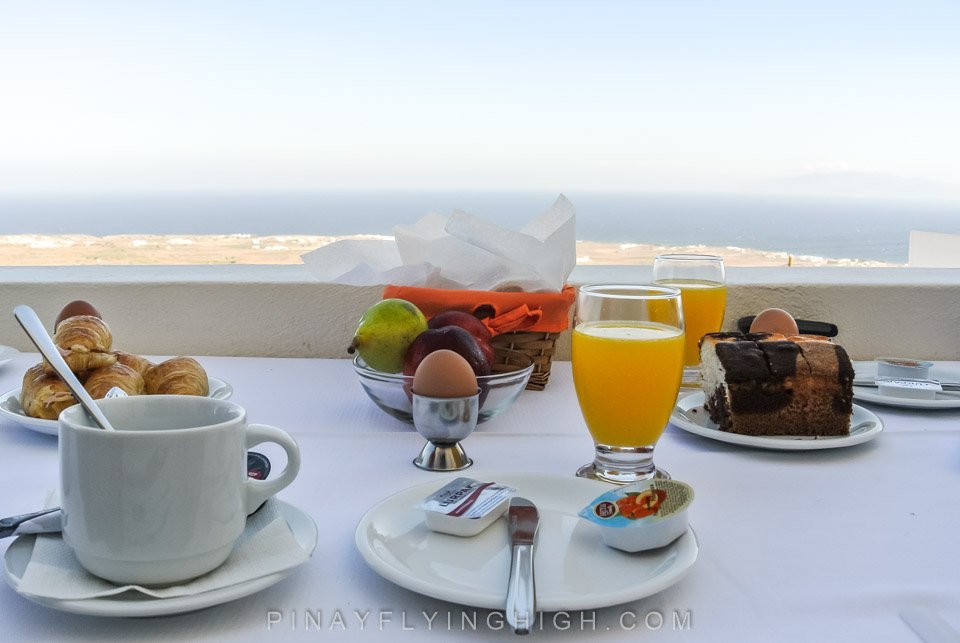 After breakfast, we went for a drive towards Fira. Fira is the capital of Santorini and is one of the major tourist attractions of the island. From Finikia, the drive took us about 30 minutes to reach Fira and as we arrived in the capital of the island, so did the passengers of 3 huge cruise ships. It was packed! 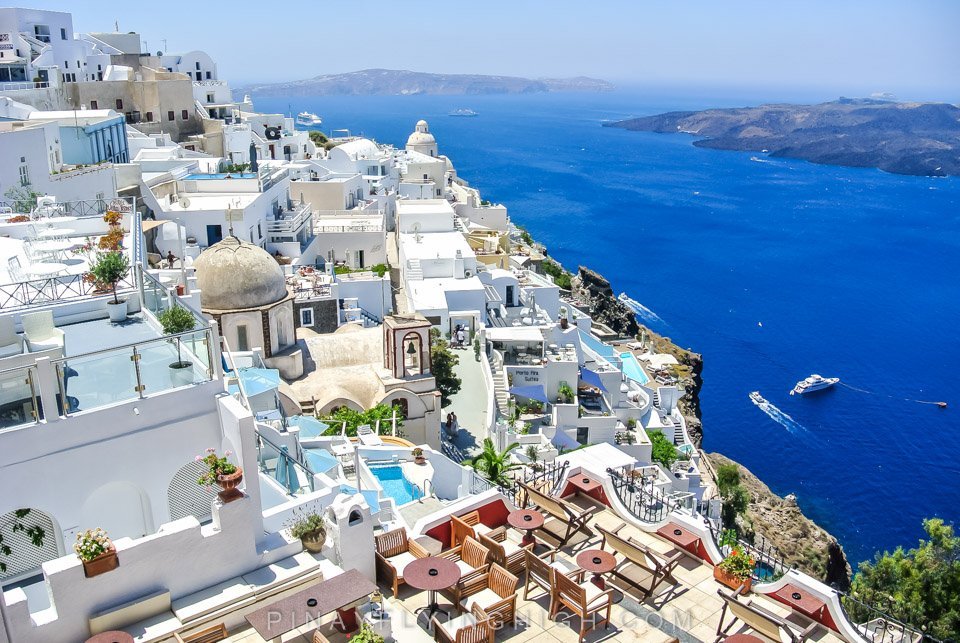 I hated Fira when I first went there 5 years ago and I hated it even more now. Going to Santorini on a peak season, I have already psyched myself up for such a maddening crowd but I guess it wasn’t enough. I hate crowds specially in places like the narrow alleyways of Santorini. I don’t have much patience to deal with it to be honest so I let my Aunts shop around while I joined the Greek Mister and my mother-in-law for coffee and some drinks in a beautiful cafe called Iriana. 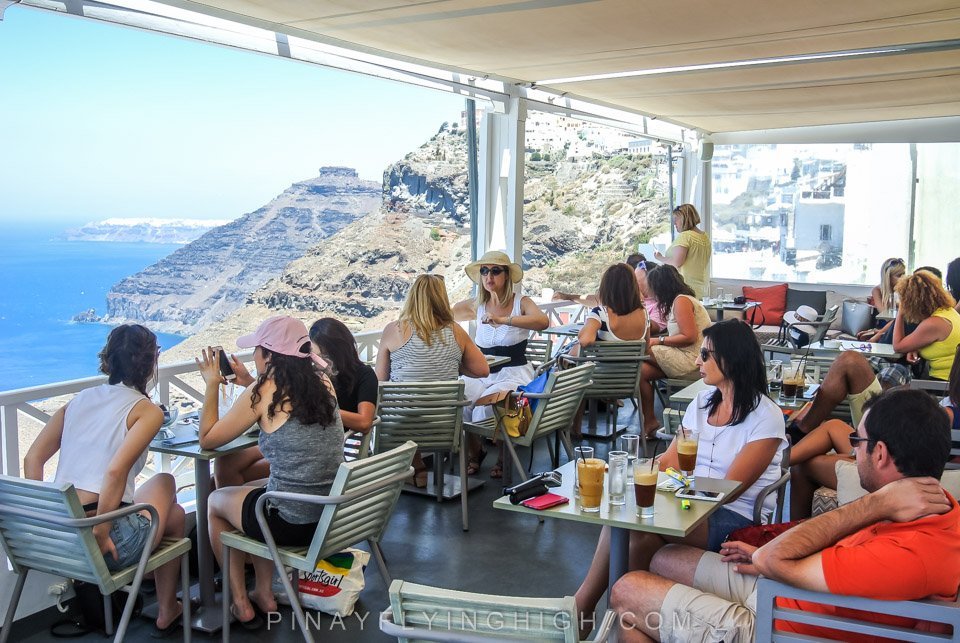 The view from Iriana was breathtaking – with the caldera right in front of us and the cliff with its white houses on our sides. I didn’t mind sitting there for hours as we waited for my Aunts to come back from their shopping spree. Also, they have wifi so that helped a lot. :p 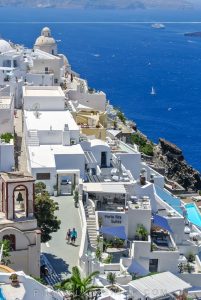 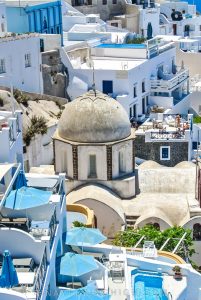 When my Aunts came back, we drove back to our hotel for a siesta and to freshen up. It’s been quite hot for the past few days so we were practically taking a shower at least twice a day during this holiday in Greece. We also bought some sandwiches and pita gyros for lunch as we weren’t planning to go out again until dinner. 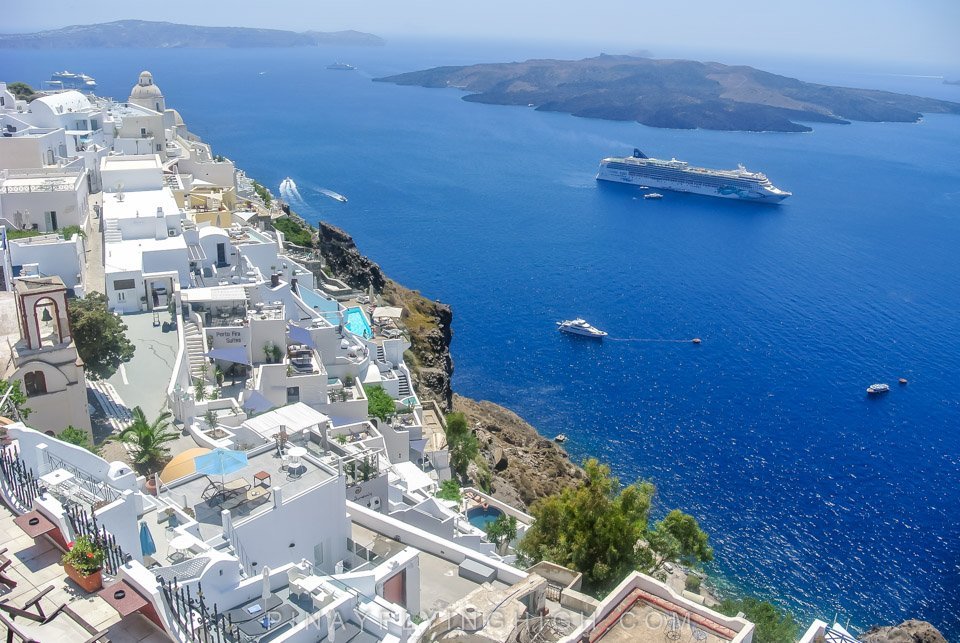 At 7pm, we started our drive towards Ammoudi Bay which took us about 10 minutes from our hotel. I remember going there the first time we were in Santorini but we were discouraged to stay as it was packed. It was also packed this time but the dramatic scenery which welcomed us took us by surprise. We all didn’t want to leave. The Greek Mister had to park the car far away from the bay which would require us to climb a steep road afterwards. We didn’t mind, the scenic beauty of this place was totally worth it. 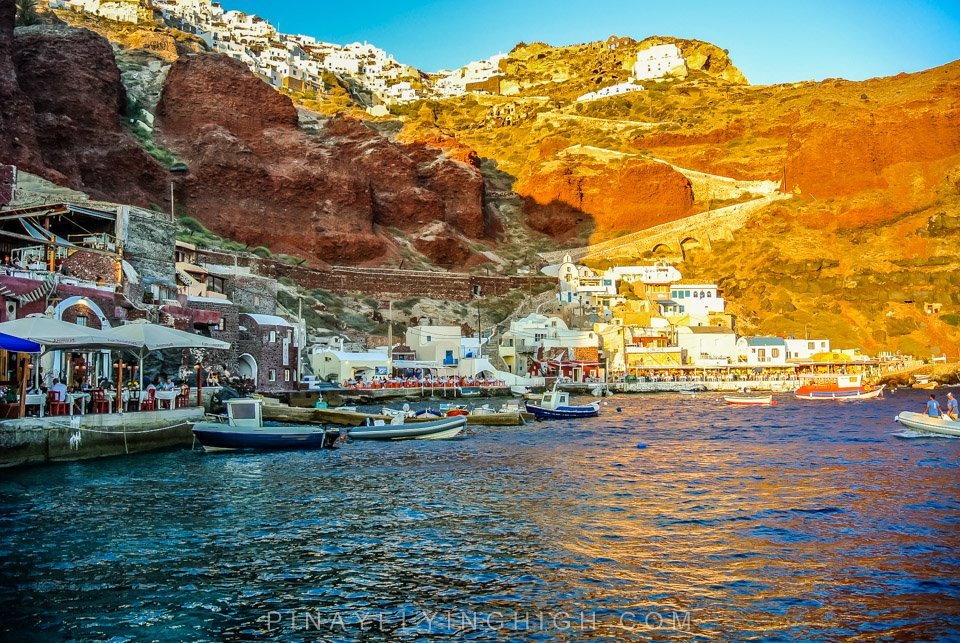 There were a lot of boats in the middle of the sea, they were all guided tours to view the sunset from this side of the island. Tavernas were lined up along the sea and almost everything was packed. We didn’t really anticipate how famous this place is during the time that we chose to be there, dinner time. Lol. We also didn’t realize that if you want a table with an unobstructed view of the sunset, you would need to make a reservations for it. 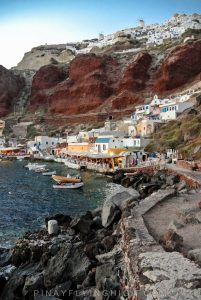 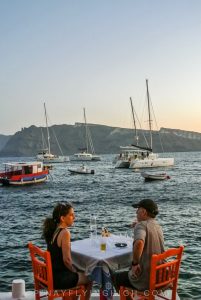 We were running out of options until we came across a few tables which were just vacated at a taverna called Katina and I think that we were in the right place at the right time. We had the most fabulous meal here and paid a non-touristic price for it. If we passed by it a bit later or earlier then we would’ve missed having the best dining experience we’ve had in Santorini. This needs a separate blog post as I really do want to promote this restaurant for serving the freshest seafood dishes I’ve ever eaten at a very affordable, non-Santorini prices. Taverna Katina in Ammoudi Bay, take a good note of that if you’re headed to Santorini. 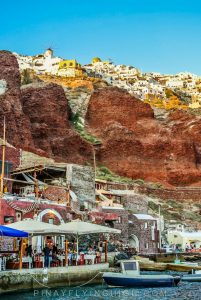 After the seafood feast, we went back to Oia to buy a bottle of Vinsanto wine. We had our first taste of this wine on our previous visit in Santorini and we’ve been searching for it everywhere! Vinsanto translates to Holy Wine as it’s the same wine used by priests during an Orthodox church mass. Lucky priests! 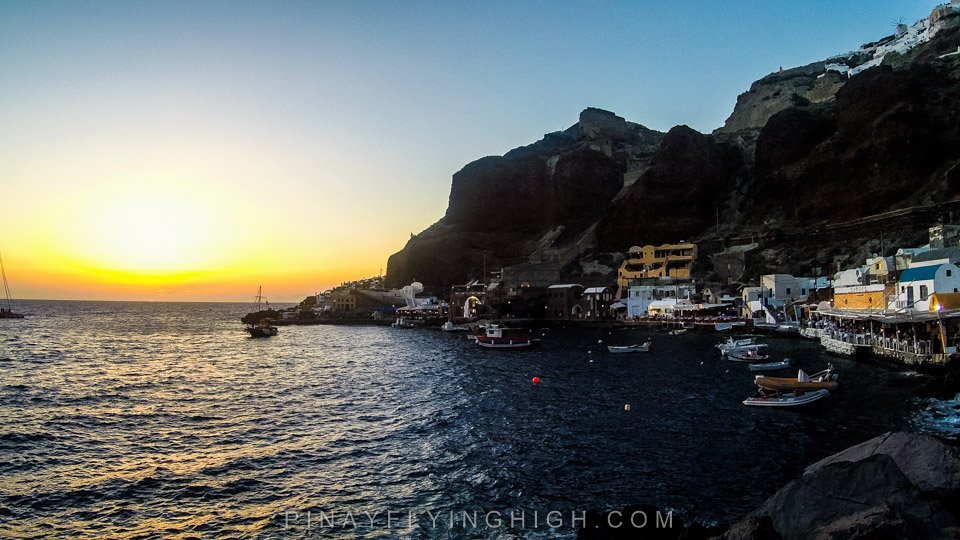 We took the wine back to our hotel to celebrate our last night in Santorini. We only had 2 nights to spend in Santorini this time around, a rather shortened version of our 6-night stay the previous time we were here. Two nights are definitely not enough as we haven’t even scratched the surface of this island but as they say, some good things never last. I’m sure I’m returning to Santorini though, I’m very sure of it. 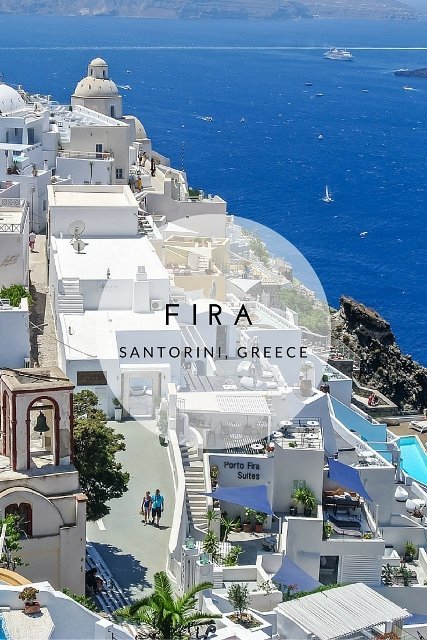 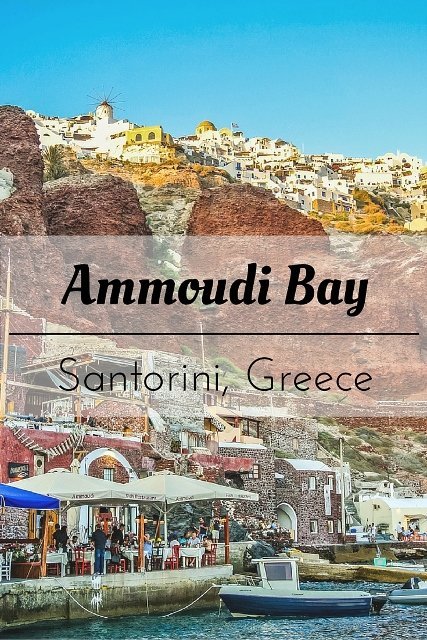 PrevPreviousSantorini, You’re Still As Breathtaking As You Were Five Years Ago.
NextWhere To Stay in Santorini.Next