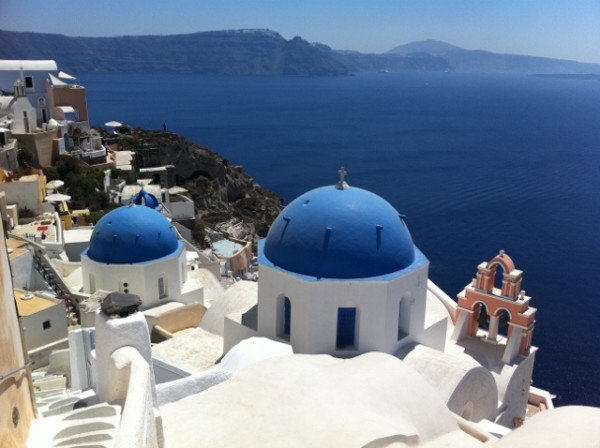 So I just came back from my recent holiday to Greece and yes, I do have a lot of things to write about that really awesome vacation. For now though, to keep the blog running as it has been dead for the past few days since I left I’ll give you a few reasons why you should do what I did – visit Greece.

I am no expert of Greece. I have been there only twice but luckily I was able to explore this beautiful country in depth thanks to the Greek boyfriend who was gracious enough and agreed to be my personal tour guide/driver. Having him with me during both travels made it really easy to fall in love with the country but I think even if I was to explore the country myself it would’ve still left me in awe.

The first time I went there was in 2011 at the height of the economic crisis and at the time, the riots in Athens. However, when we arrived in August of 2011 I have not seen nor felt the crisis. Tourists flocked the Acropolis and we can’t even find ourselves a table in Thisseo for dinner. It was THAT packed and I was glad that I didn’t let the media affect my decision of traveling to Greece during that time or else I would’ve missed the opportunity of crossing it out from my bucket list.

Here are my top 10 reasons to visit Greece

Because they’ve got a very rich history, culture and loads of UNESCO World Heritage Sites.
I believe that history and culture always go together. A culture roots down from the history of a particular place and with Greece’s history dating as far back as 3000 years ago, I think anyone will agree with me that they’ve got a very rich one. At the moment, they have 17 UNESCO World Heritage Sites as well – 3 of them I’ve seen and visited. I’m not so sure about you but I have this fascination of seeing UNESCO sites and I’m planning to see as much as I possibly can. 🙂 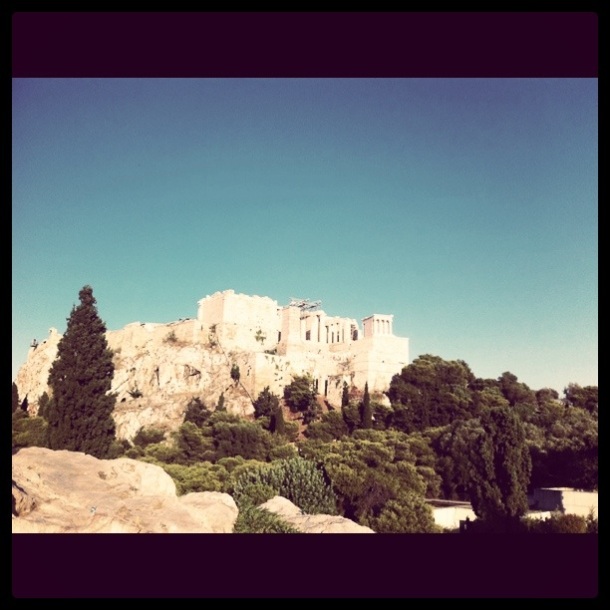 Because they’ve got a fantastic weather.
Coming from the Philippines, I have only experienced 2 kinds of weather – rainy or sunny. While some of the Westerners may love the sunny side of the Philippines, I really do hate it! It’s very humid and the sun bakes me to a charcoal-black whenever I go sunbathing. Not tan but black. :p In Greece on the other hand, even if the sun is shining at its peak – the humidity is bearable, well at least for me. After having spent almost two weeks in Greek beaches, I am now sporting a red-ish, gold-ish tan which I really do love. The country receives a lot of sunshine which is basically what they are famous for. The best time to go is between May to September which is almost half of the year. 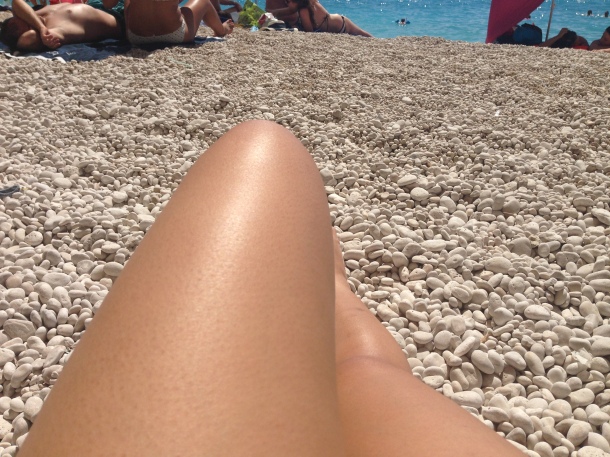 Because their cuisine is one of the best!
I always make it a point to eat a Greek local dish in every meal, apart from the seafood. If you follow this blog, you probably already know that I’m a big sucker for seafood. It’s not so hard for me to give up the seafood though as the Greek cuisine has a lot to offer to my taste buds. Pastitsio and gemista are two of my favorites. Followed closely by Pastitsiada of Corfu. For seafood, I love them all but if I am to choose a favorite it’ll be htapodi xythato (octopus marinated in vinegar), gavros marinatos (anchovies marinated in vinegar) and garides saganaki (shrimp with tomatoes and feta cheese). I must mention too that I have tasted the best grilled pork steak in Meteora. Yum!!! Obviously, a trip to Greece will cost you to gain a few pounds but who cares??? You’re on holiday! 🙂

And will I ever forget the famous Greek souvlaki?

Because it’s a colorful country.
Does the combination of blue and white reminds you of Greece? It does for me but after this recent trip, I realized that there are some other colors splashed to this amazing country that will probably make all the painters, artists and photographers go crazy about.

Photo taken from an alley way in Parga. It’s not filtered and was taken only by my dependable iphone5. 🙂

Because the Greek hospitality is not only a cliche made popular by Hollywood.
During this recent trip, I have had a great opportunity to meet the boyfriend’s family (now my husband) and it was awesome. Probably the highlight of the trip for me. The warmth, love and genuine hospitality can be felt as soon as I walked in their house. It was a really amazing experience which I will explain more on a different post. Yes, a whole blog post is needed for me to explain that.

Because it is accessible.
They’ve got it all covered for you to be able to explore the country in depth – by land, air and sea. We’ve taken a cruise from Lefkada to visit some other nearby Ionian islands for a day. The only regret I have was that the itinerary for the cruise doesn’t include a longer stay in each of the islands.

The cruise made me seasick though. :p

Because most of the Greeks speak English.
I have never had a hard time buying my souvenirs or ordering frappe, the Greeks are very accommodating to tourists and will have a good command of the English language. It wouldn’t hurt though to greet them in their own language just to show your respect towards them as well.

Because it’s safe.
Of course I have the boyfriend with me whenever I walk through the streets of Greece late at night but even then, I have never felt threatened. According to the boyfriend though who knows better, it won’t be the same in bigger cities like Athens and Thessaloniki.

Because it has a very diverse nature.
On our drive from Lefkada to Igoumenitsa, I have seen a lot of different sceneries – rolling hills, mountains, rocky walls, lakes and the sea. It has all kinds of things to offer for just about anyone. This applies to the beaches that they have too. There are rocky beaches, sandy beaches, pebbled beaches, beaches hidden inside a cave or beaches which can only be accessed by the 300 steep steps. It’s amazing!

Eggremni Beach in Lefkada which can only be accessed by boat or the 300 steps which is quite a hike.

Because it’s in your bucket list.
Admit it, who doesn’t want to go to Greece? At some point, everyone might have probably dreamed of seeing the Acropolis or the whites and blues of Santorini and Mykonos. Well this I tell you, whatever your reason is for traveling – I’m sure Greece has it for you. 🙂

Note: I have deliberately posted most of the unedited, raw pictures that I have of Greece. The photos don’t do much justice on the beauty of this country. You may visit my Facebook page if you wish to see more: Pinay Flying High 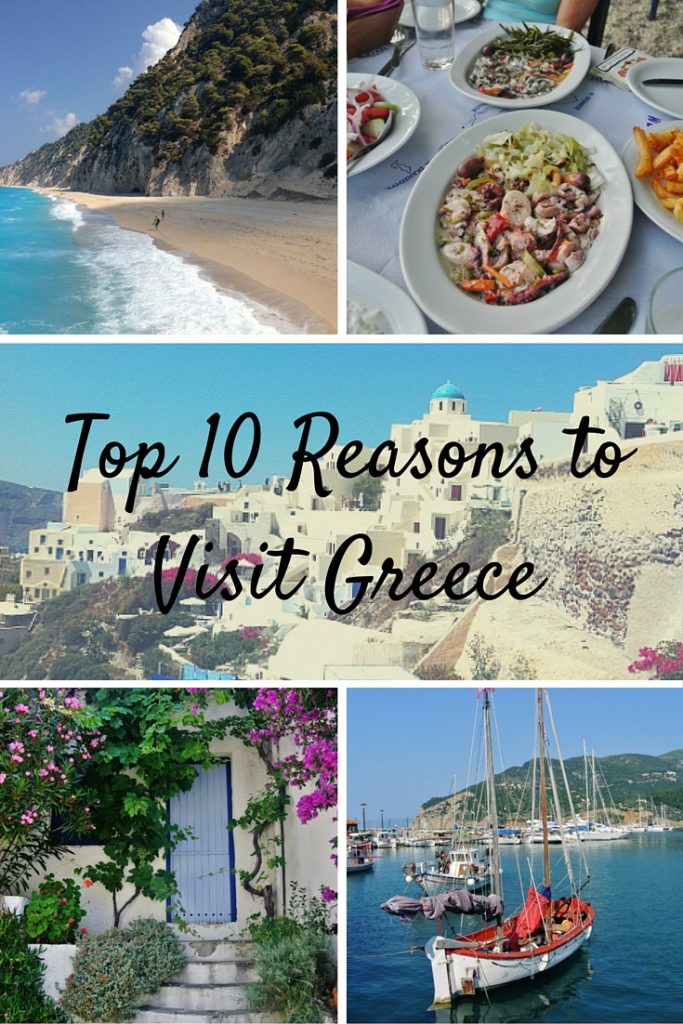