Three Nights in Nusa Dua With A Chance of Bali Belly 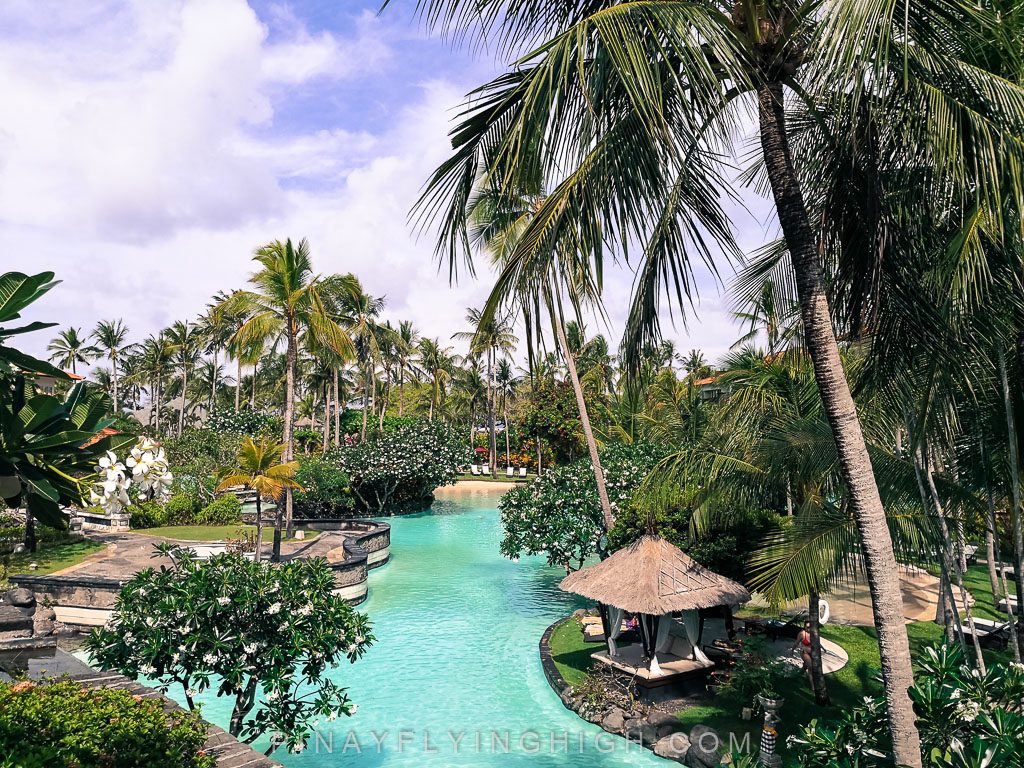 Hearing that your flight will be delayed for 25 minutes isn’t the best thing to happen specially if you only have an hour or so to connect to your next flight in the massive airport of Dubai. I was so anxious the entire 7 hours of the flight from London Heathrow to Dubai wondering if we’ll make it to our flight to Bali. I was hoping that by the time we disembark from the aircraft upon arrival in Dubai, someone will be there waiting for us to assist us to our connecting flight. However that didn’t happen in fact, when we asked a mean-looking lady dressed in an Emirates uniform if she could help us to reach our connecting flight which apparently is in a different concourse she replied nonchalantly and sarcastically “I suggest that you start running now to the gate instead of wasting your time talking to me.” So much for the “Dubai Customer Service Experience” that they are so proud of.

Note: Normally, Emirates staff will be waiting for passengers with short connecting time upon arrival and will provide a buggy service to the next gate of departure to avoid running around like you’re competing in a marathon across the very busy and humongous Dubai International Airport. Unfortunately, we didn’t get this service.

Luckily we reached the next gate just before the doors closed, we were the last passengers to board the flight. My trust in Emirates Airline has been restored for waiting for us. I was just wondering if our bags reached the next flight as well but that’s easier to deal with since we can just buy new clothes in Bali. :p 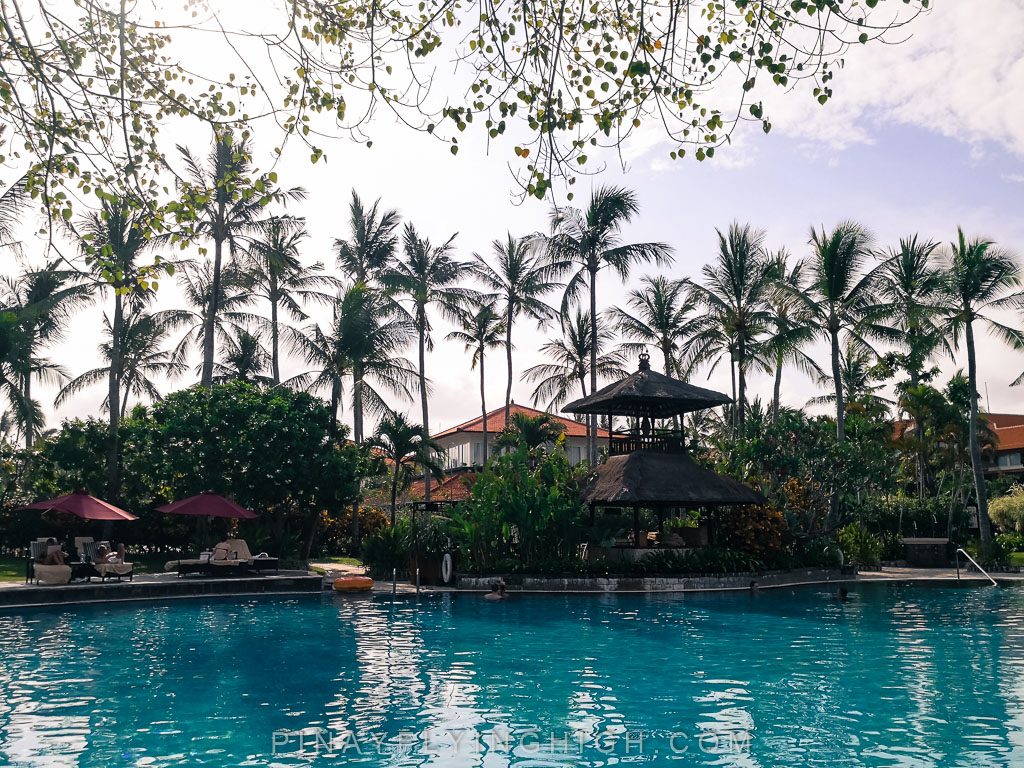 We arrived at 10 in the evening in Bali and were whisked out of the airport to our first hotel during this holiday – Tha Laguna, a Luxury Collection Resort & Spa in Nusa Dua. As a travel agent, I have been selling Bali as a destination for quite some time but didn’t realize what and how the area of Nusa Dua looks like. It was too pristine to my liking if I’m being honest, it’s not the Bali that I thought it would be. It’s a gated community of 5 star resorts, away from the hustle and bustle of the real Bali. It’s the kind of place I would expect from Dubai and not the exotic Bali. 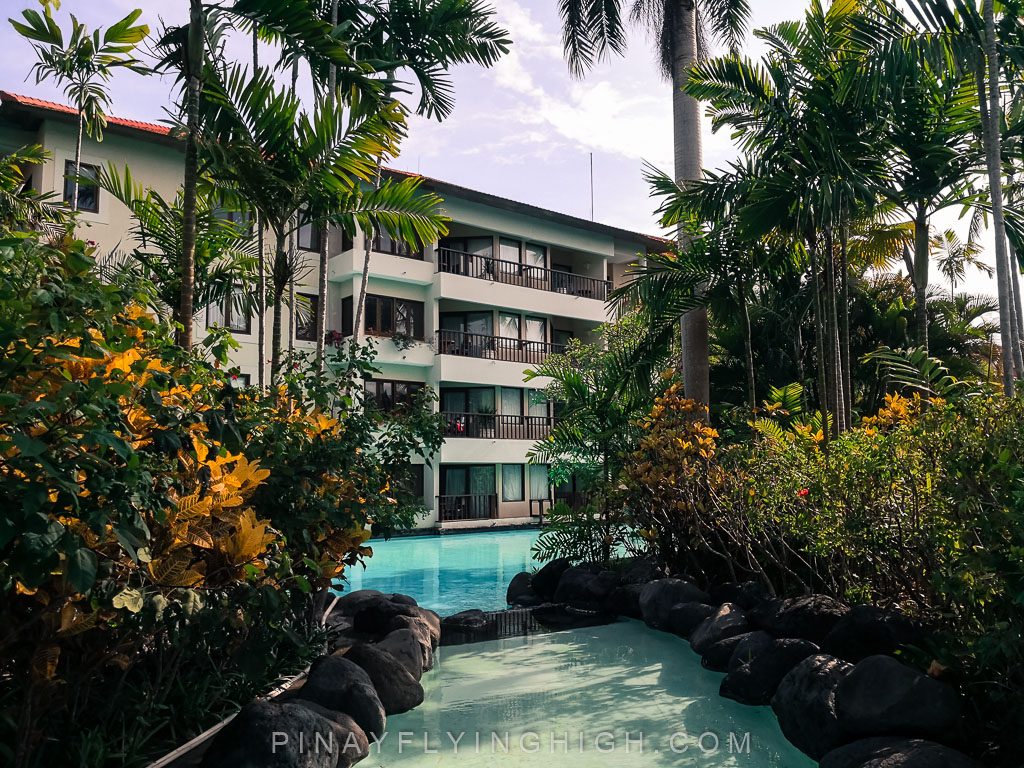 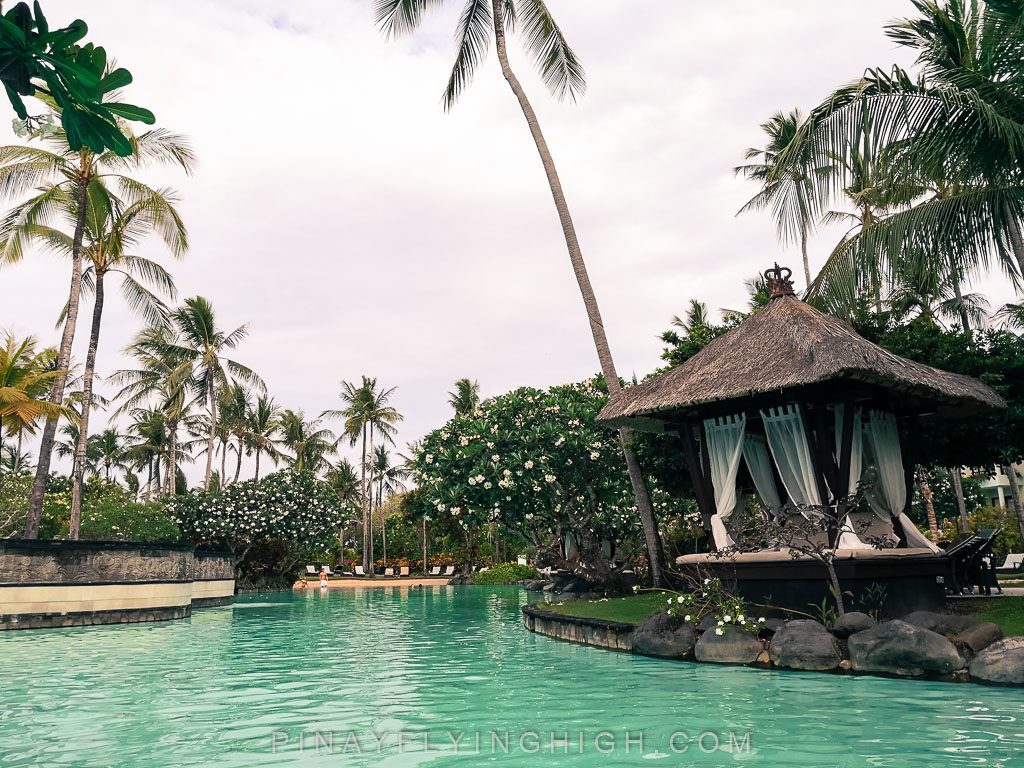 The Laguna resort is massive and lovely, it has seven pools but I was a bit disappointed when I found out that the pools weren’t connected. Still good to know though that you have 7 options as to where you’ll park your bum to sunbathe and swim. 🙂 We had a deluxe lagoon view room with our own balcony overlooking one of the 7 pools. After taking a shower, we both sunk into our massive king size bed and let it lull us to sleep. The flights we took were too tiring I didn’t even bother taking a photo of our own room before getting into our bed. 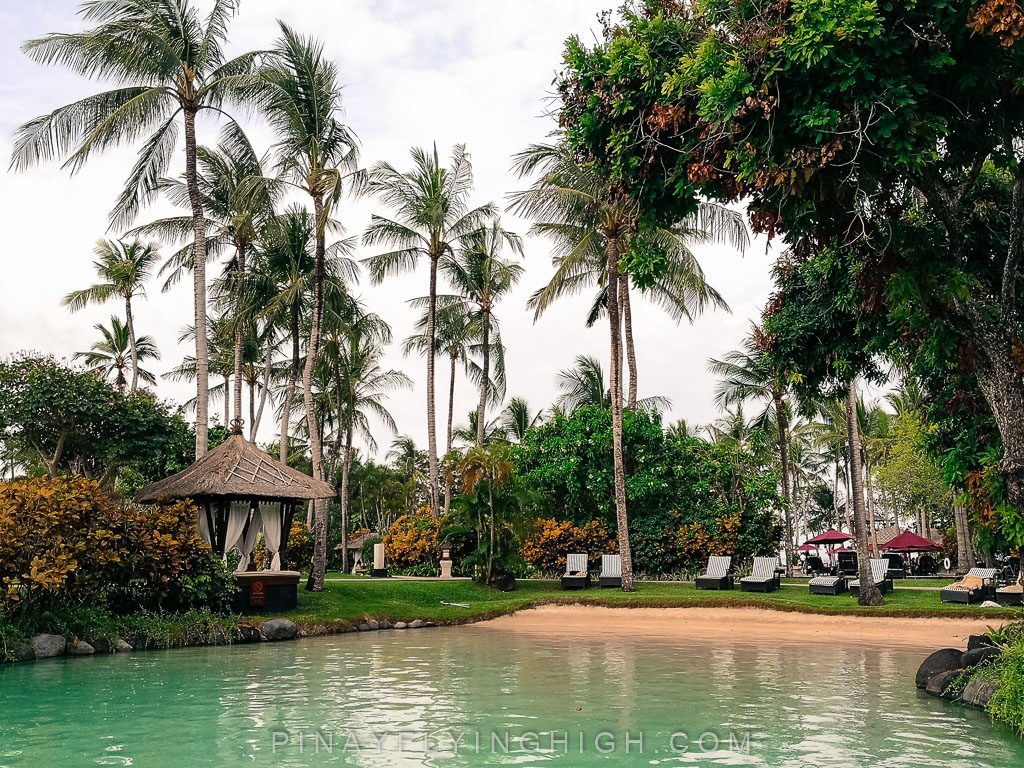 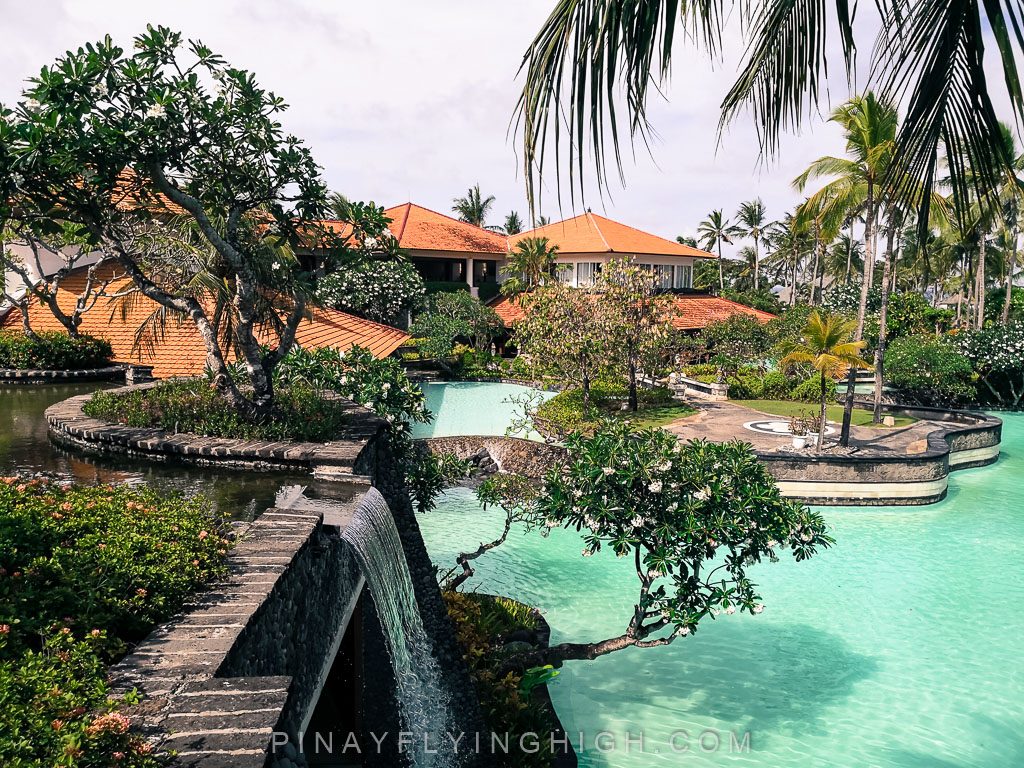 Breakfast the next day was superb, I was looking forward to all the rice and noodles in the buffet. I tried not to eat much though since we booked a Sunday brunch that same day in Laguna’s Arwana Restaurant with a promise of succulent barbecue and freshly shucked oysters – we’ve been looking forward to that of course so you can only imagine how disappointed we were when we showed up at Arwana Restaurant at lunch time and was told that the Sunday brunch was cancelled that day due to an event. Lol. It’s a miscommunication between every single department of the resort, even the front office had no idea about it and confirmed to us when we checked in that the Sunday brunch was still on. The restaurant manager was kind enough to still offer it to us though, although it was no longer the festive brunch that I was expecting – we still had loads of seafood which was what we were looking forward most to. All’s well that ends well with a big, fat belly. 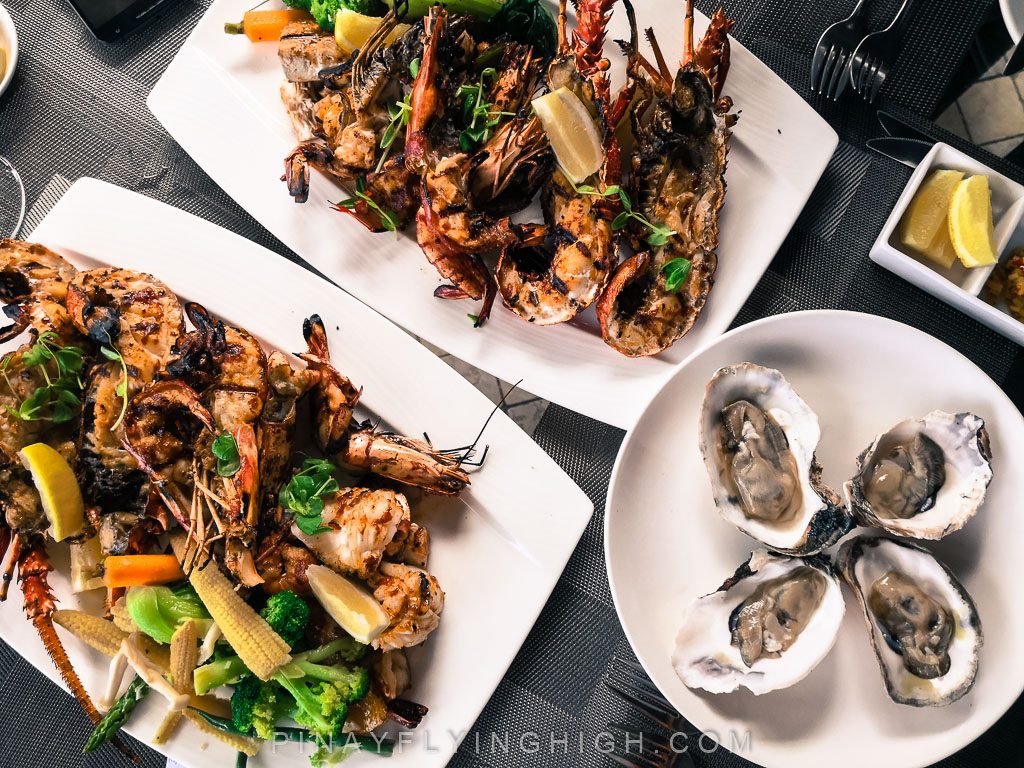 The rest of the day was spent lazing around the resort, shooing away squirrels (they had lots of them) and trying 4 out of 7 pools before crashing into one of the sunbeds for an afternoon nap. At around 6:15pm, there was a cultural show and fire dance at Cascade – the outdoor bar near the lobby of the hotel. It was quite a nice show to watch before dinner while enjoying some happy hour-priced drinks. We had a half board package so breakfast and dinner were both included in our stay and we can either have dinner in Banyubiru (buffet) or Arwana (a la carte). On our first evening, we had it at Banyubiru. I wasn’t really very impressed with the selection, they had a roasted suckling pig though but as you may expect from a buffet spread – it was not very hot when we ate it. We had some drinks at Kul Kul Bar by the beach before heading to bed. 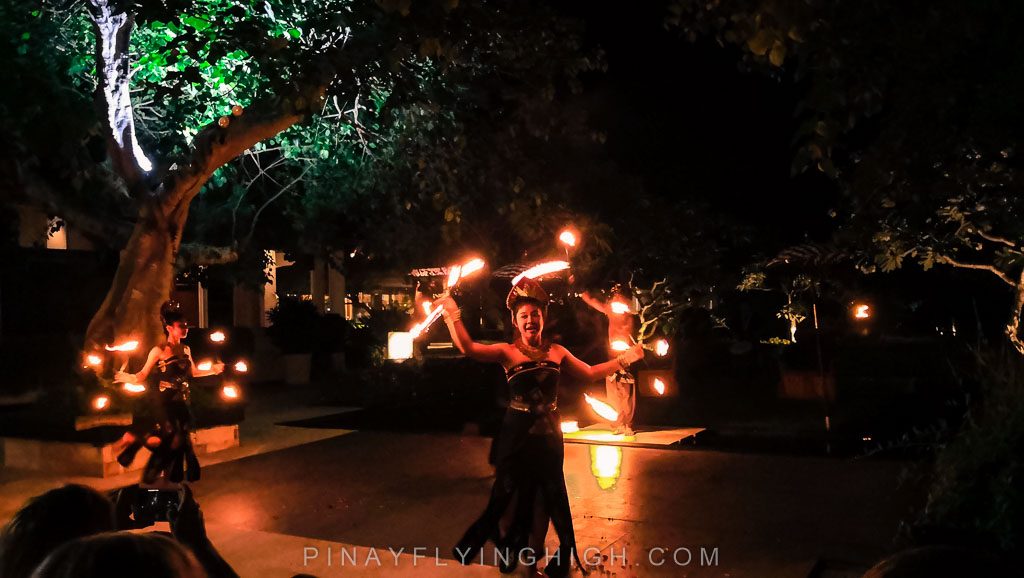 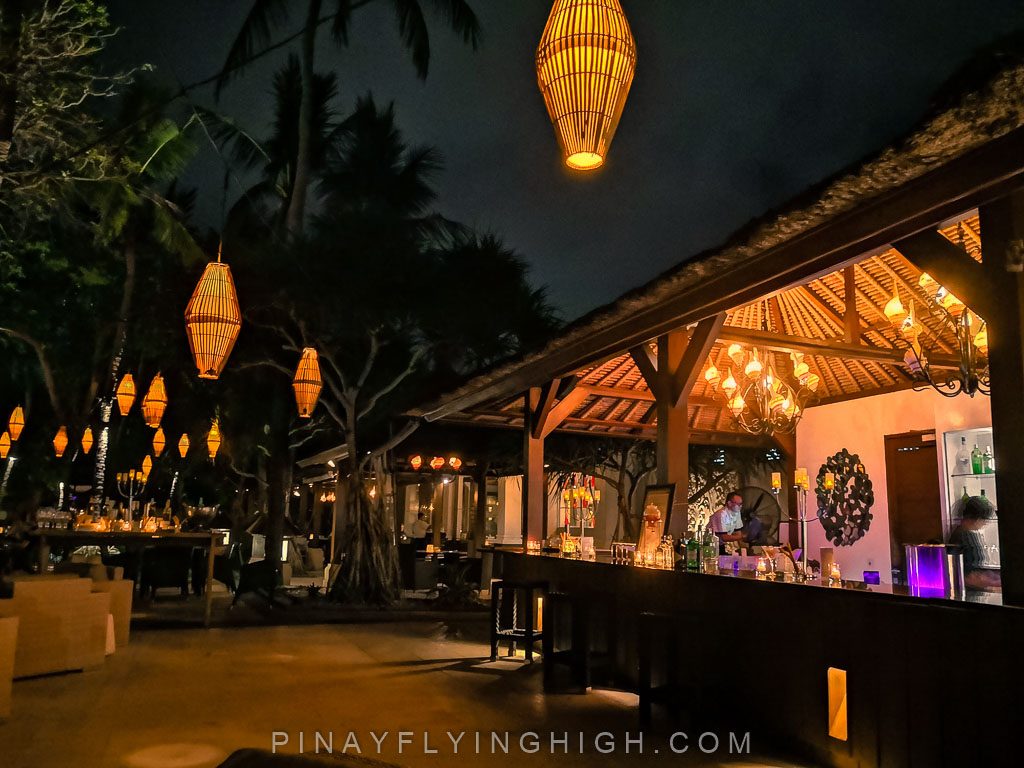 We had a lot of things planned on our second full day in Nusa Dua however, things will drastically change later that afternoon. As a start, we had a heavy breakfast in Banyubiru. We figured that since we’ll be out and about in the afternoon and as we were planning to have dinner back at the resort, we’ll just skip lunch and have another heavy meal when we come back from our excursions. It was really hot and humid that day as well so we basically spent most of the day in the comforts of our air-conditioned room while watching movies. I know, I know – not very productive but we had some excursions planned for the next few days anyway so I’ll be able to make up for this lazy day – or so I thought. 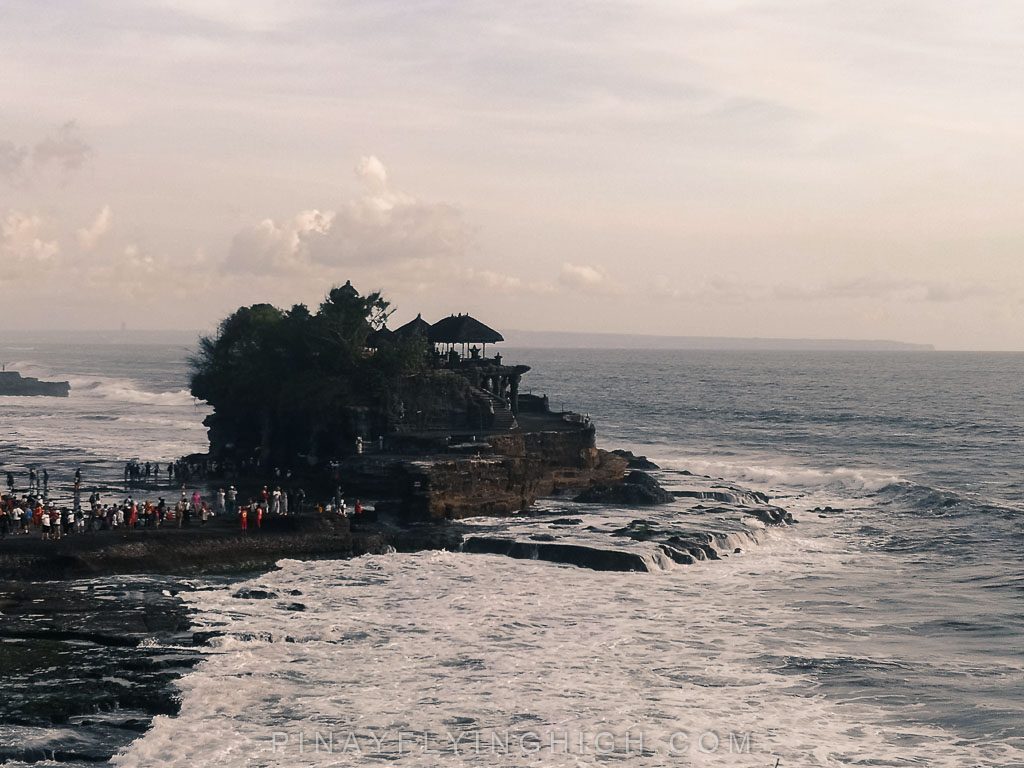 At 3pm, our guide picked us up from the hotel and we headed straight to Tanah Lot. During the drive towards the temple, my stomach started cramping. I didn’t think much about it though so off I went exploring the grounds of Tanah Lot and took some photos. It was too touristic and too crowded though so I wasn’t impressed to be quite honest but the history of the temple itself was quite interesting.

By the time we finished our visit at Tanah Lot, my stomach cramps had gotten more bothersome so instead of going to our next destination – I asked The Greek Mister if he would mind not doing the rest of the tour and instead, just go back to the hotel in case my stomach cramps get worse. The Greek Mister who’s not really into doing touristy things was more than happy to say “YES! Let’s go back to the hotel!” Luckily, as it was a private tour – we can easily tell our guide that we prefer to just go back to the hotel instead of doing the rest of the tour with no hassle. 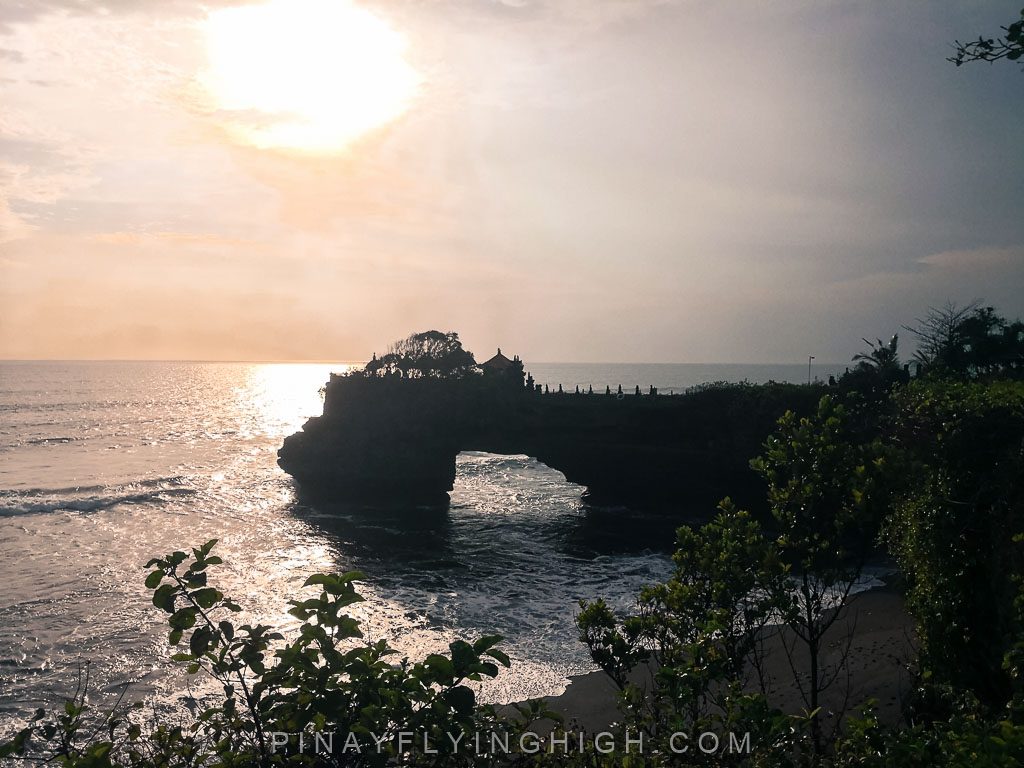 The drive from Tanah Lot back to The Laguna Resort was about an hour or so including traffic. My stomach cramps was getting worse and worse by the minute, I don’t really understand what it was but it just felt like someone’s wringing my intestines tightly. As soon as we got back into our resort, I went straight to the toilet and that’s when I realized what I had – “Bali belly”. I didn’t want to ruin our holiday though so I still went out for dinner and some drinks with The Greek Mister although I didn’t eat nor drink much for obvious reasons and I kept going back to our room. Lol. I only had stomach cramps that night so when I went to bed I was hoping that the next day would be better specially since we were transferring resorts which was 3 hours away by driving from where we were.

I woke up in the middle of the night shivering, I had to wear socks and I also had to wear extra clothes. I was still feeling cold even with all the layers of clothing so I turned off the AC. At around 3am, I woke up again sweating with my whole body aching. It literally felt like a whole building was built on top of me overnight and the weight of that building caused this terrible body ache. I couldn’t sleep well afterwards and dozed on and off until 6 in the morning. When I woke up at 6am, I was sure I had a fever and I was actually feeling worst so I asked the reception for the in-house doctor to which she replied “that will cost you INR600,000.00” – at that point, I’d pay anything to see the doctor as I really wasn’t feeling well.

Doctor who looked too young I almost called him Doogie came in, took my vitals and gave me some medicines with ridiculous prices. I only took the paracetamol and another medicine for my stomach and skipped another tablet that I was supposed to take to stop my nauseous feeling. I went back to sleep after while The Greek Mister went for breakfast. The hotel kindly provided some yogurt and white bread upon my request, I don’t really eat bread but based on my research – bread is good when you’ve got an upset stomach so I forced myself to eat some before going back to sleep again. 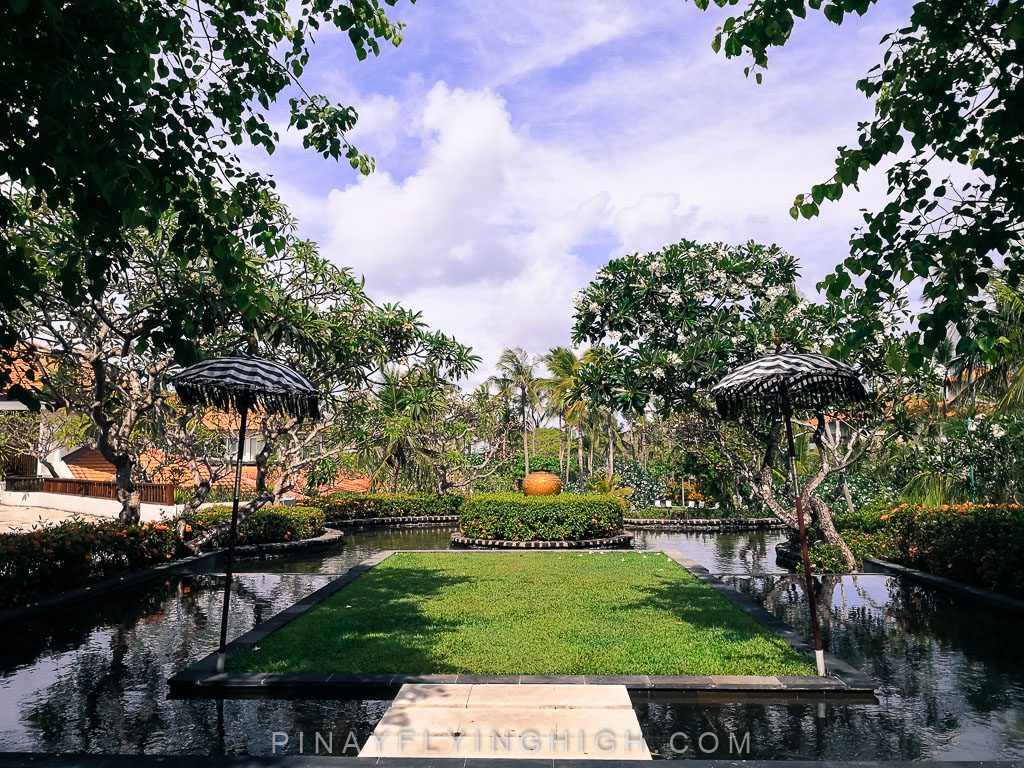 At the time of check-out, I was feeling a bit better but still very weak – the chef, the restaurant manager and the general manager of the hotel were all there to bid me farewell and to make sure that I am fine. It was a very nice touch, although I don’t really blame the resort for what happened to me it was still very nice of them to feel responsible to it even if it’s not proven. In my defense, I didn’t eat anywhere else so I could’ve only gotten it from the resort but in their defense – no matter how clean they prepare and cook the food, they don’t have control to the people touching it at a buffet spread. So I don’t really blame them, it can happen anywhere and to anyone.

The 3-hour drive to our next resort was excruciating as I was still feeling weak, with fever and a whole body ache. In the middle of our drive, I asked our guide if we could stop at a pharmacy to buy anti-nausea tablets that I didn’t take from the doctor in Laguna Resort because I was being too cheap. We stopped at a random pharmacy and to my surprise, the tablet that my husband bought from there was only INR15,000.00 whereas the doctor at the hotel was selling it to us for INR300,000.00. That’s a 200% difference! I’m sure that the other medicines were also overpriced but my travel insurance will cover it anyway so I don’t feel as bad. 🙂

I couldn’t be any happier when we arrived at our next resort and saw the bed, I crashed onto it and slept for only God knows how long. Lesson learned – always travel with a travel insurance. 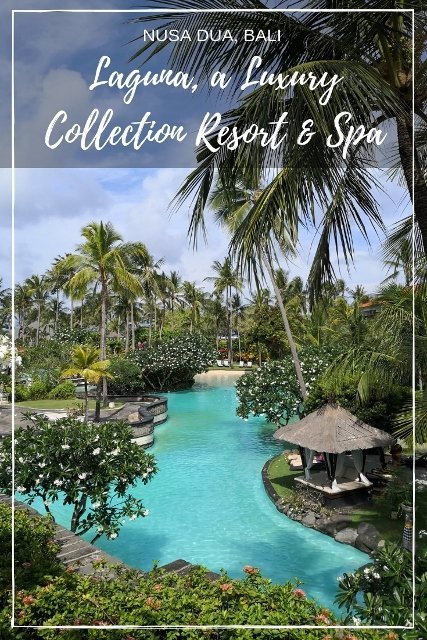