Things To Do in Santorini: Be Amazed By The Beauty of Oia 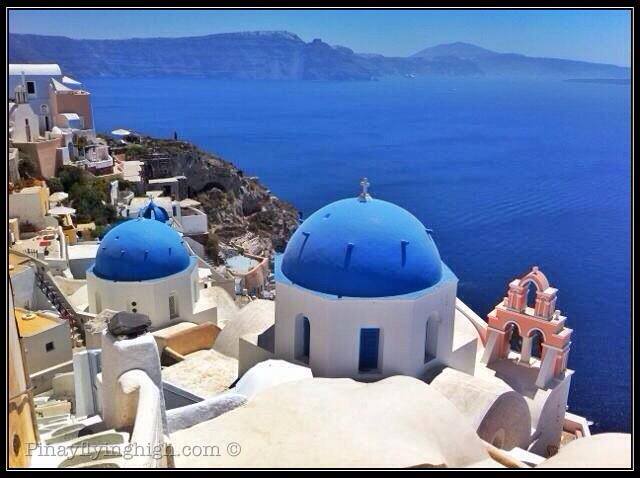 When the boyfriend and I started planning our very first Greek vacation 3 years ago, I have made it a point to go to Santorini which is at the very top of my bucket list. The boyfriend didn’t want to go there because according to him,  a true-blooded Greek, Santorini is just a tourist trap put there in the map of Greece to fool the tourists. I of course told him that I don’t think it’s the case as it looks so pretty on the photos so I stood my ground and even started planning my own travel to Santorini without him for a few days and I’ll just meet him afterwards. 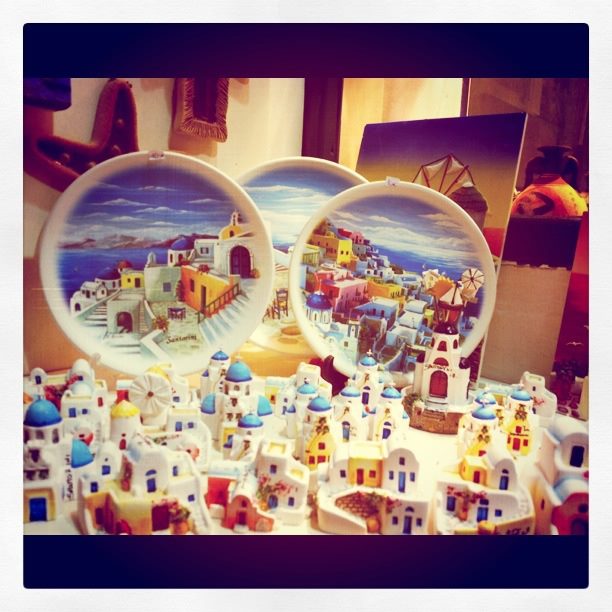 The tiny houses of Santorini as a souvenir.

The boyfriend caved in finally, which I already expected for him to do after all the whining and begging from my side. Haha. I was over the moon when he agreed and started imagining myself walking along the small cobbled-streets of Santorini two months before we even started our vacation. On the day of our flight from Athens to Santorini, I couldn’t hold my excitement any longer. I was fidgeting and restless the whole time of the flight and kept asking myself, are we there yet? The flight was only 20 minutes by the way.

We arrived in the afternoon and by the time we got out of our hotel in Finikia, it was already dark to see anything. The build up of excitement to see Santorini was killing me, you know that feeling? Those butterflies in your stomach when you’re excited? I had about a million of those butterflies in my stomach at that time.

I woke up early the next day of course and I was greeted by a fabulous view from our hotel. Cave houses all around us, it was magnificent!

It’s not even the real Santorini yet, if you know what I mean but it’s already extremely lovely. I dragged the boyfriend out of bed and immediately went to Oia. Finally, I saw it! It’s spell-binding, I was speechless. Even the boyfriend who didn’t even want to go to Santorini was amazed by its breathtaking beauty. 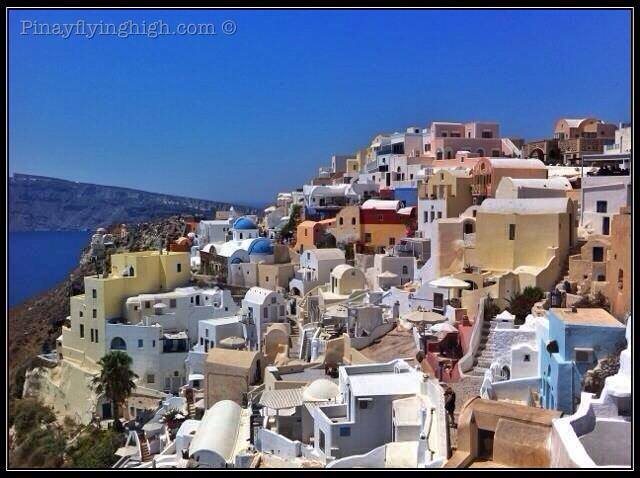 Time stood still as I just took it all in – it’s beauty was truly overwhelming. 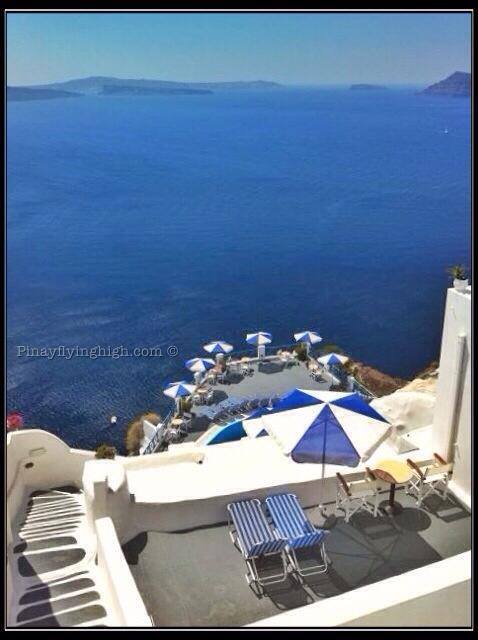 Blue is not just a color in Santorini, it’s a statement.

It’s exactly as I have imagined it, only more beautiful in reality. The white-washed houses, the blue roof, the sea down below – ah! it was enigmatic! 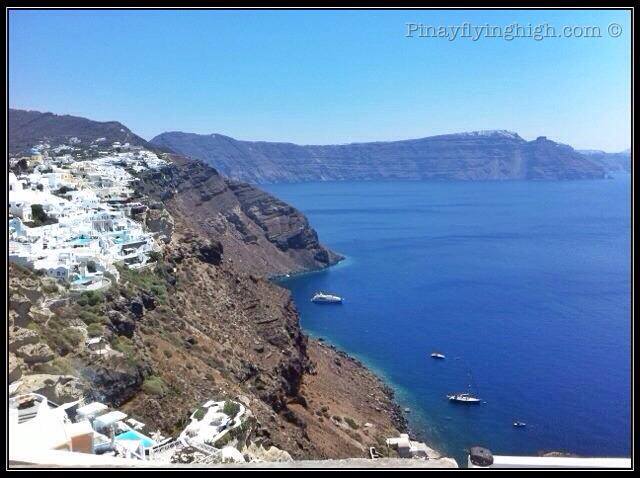 View of the sea from Oia

For some reason, I couldn’t see the very popular two blue domes overlooking the sea from where we were. So I thought it was on the other side of Santorini called Fira and not in Oia. Fira is the more popular part of Santorini where all the bars and restaurants were. I didn’t like that area as it was too commercialized so I hated the fact that those three blue domes may actually be in that part of Santorini. 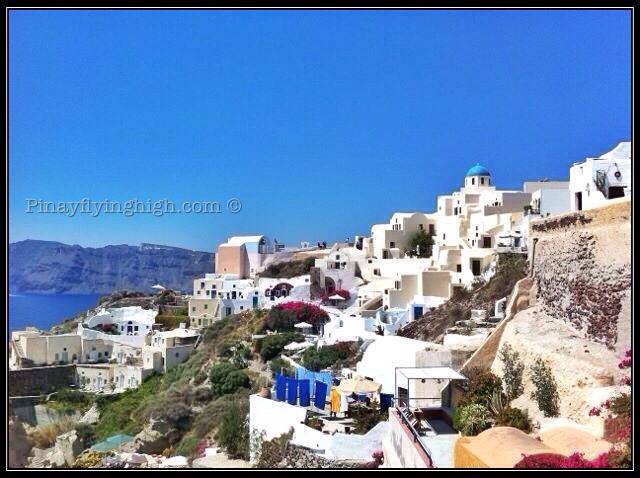 Isn’t this the most amazing view?

The next day though, as we were having breakfast in one of the cafes overlooking the sea in Oia, I leaned outwards from the railings of the second floor balcony of the restaurant and saw those two blue domes on my far left side. Be reminded that I have fear of heights but I guess the great scenery of Santorini can make you overcome that fear. After breakfast, I immediately went towards it and was filled with joy when I finally saw that picturesque postcard-worthy view of this amazing place.

Perfection is not even the best word to describe it. For someone who has dreamed of seeing this place for only God knows how long, for someone who’s got a photo of Santorini as her laptop’s wallpaper, for someone who thought that actually seeing it will only remain as a dream – I. WAS. OVERWHELMED. I cannot fathom the idea of actually being there, right at that moment, taking a photo of it. 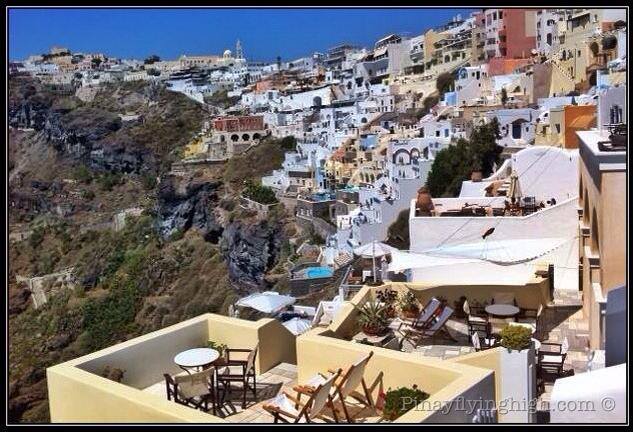 You might think that I’m just being overly dramatic but you’ll probably get that feeling if you’ve crossed out that destination at the very top of your bucket list, whatever and wherever it may be. 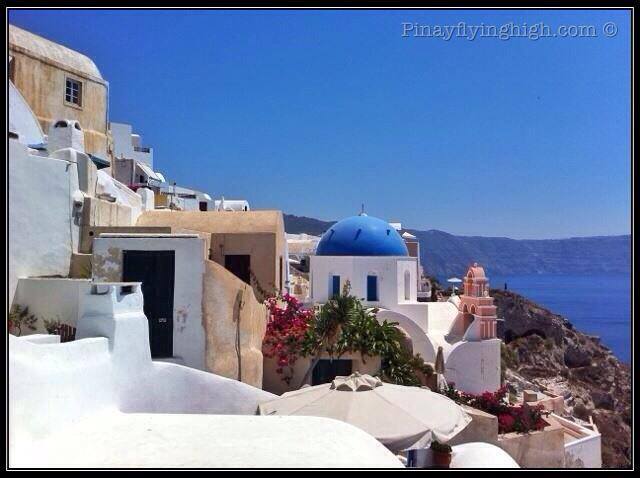 Santorini is amazing, the boyfriend who was adamant of going there was equally impressed. Reminiscing my Santorini trip always brings back good memories and it reminds me why I fell in love with traveling in the first place. I know for sure that it’s in your bucket list, because why wouldn’t it be?

All photos taken by my crappy iphone4.
For more photos, please do visit my Facebook page – Pinay Flying High. 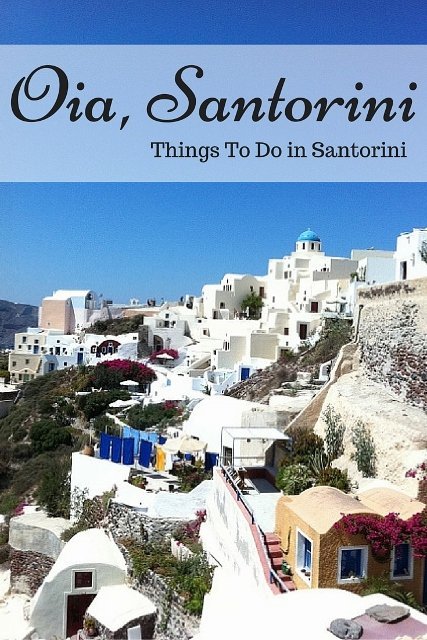