Things To Do in Lefkada: Be amazed by the beauty of Porto Katsiki. 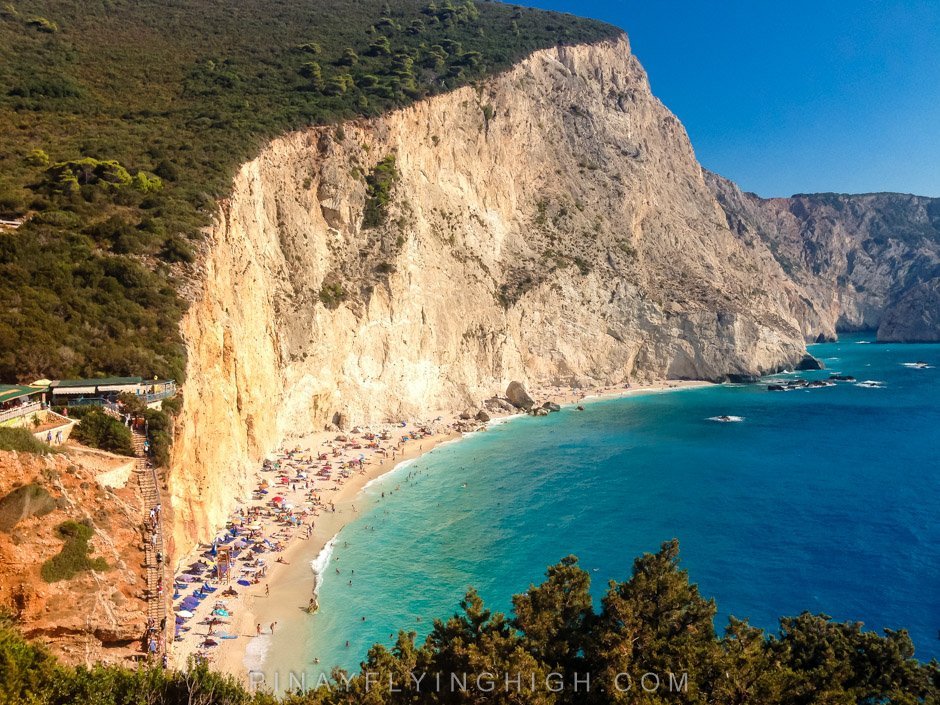 Our second day in Lefkada was actually our first full day in this resort town. Our plan was simple, spend the day at the beach. We stopped by a nearby grocery store to buy some ice for our cooler filled with beer. We also bought some beach chairs and another beach umbrella.

After running those errands, we started our way to Egremni beach. It was quite a drive, around 30mins from Nydri. However, since we started our journey quite late (12nn) the place was already packed and we can no longer find any parking space when we got there. Some people opted to park along the dirt road which basically means you’ll need to walk down to the steps and take another 300 steps to reach the beach. The going down is the easy part but I was more worried for the way back. LOL. 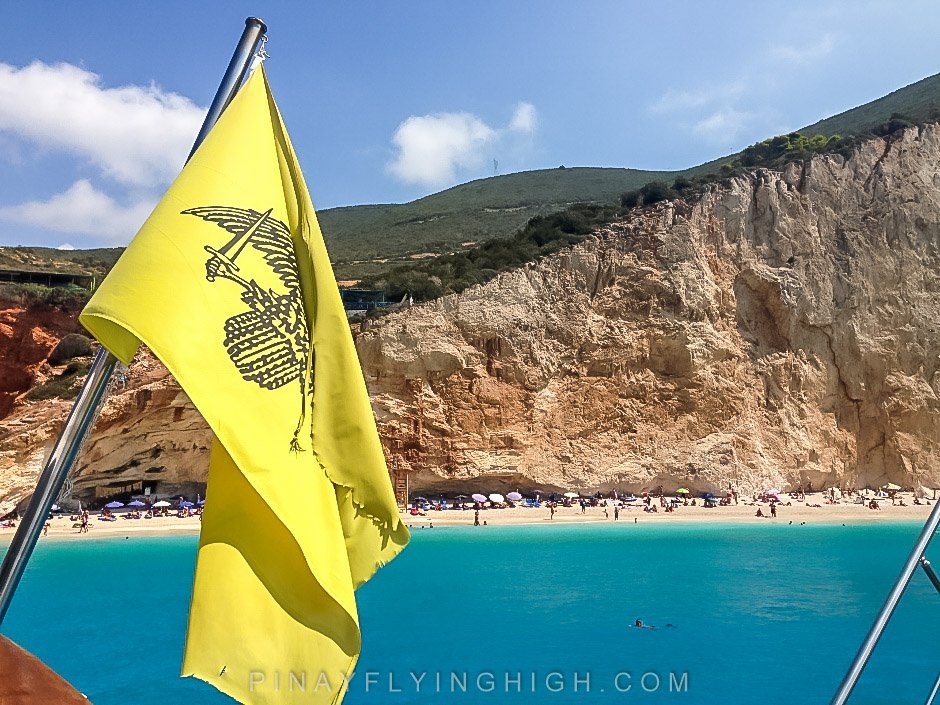 So instead of braving the hike, we changed our plans and went to Porto Katsiki with our fingers crossed that we’ll be able to find a parking space there. Porto Katsiki is one of the most famous beaches in Greece and in Europe even. I have always seen a photo of this beach in some of the Top Beaches in the World or Europe. So I cannot hold the excitement to see its beauty on the way there.

The way to Porto Katsiki is also the same as the Egremni Beach, the roads were narrow and steep so you really need to be a very experienced driver to maneuver your way in these winding roads. Bear in mind that these narrow, steep roads are all two-way as well so don’t get surprised if a car is driving towards you when your car can’t even fit properly on the dirt roads (one of you needs to give way and back out lol).

There were already some cars parked along the road towards the parking lot but we were still hopeful that we’d find a parking spot so we continued our journey. When we reached the main parking area, our only choice was a paid parking space. The boyfriend was quite hesitant to pay for the EUR5 fee but I told him that I am not going to hike back up the road to reach our car later. He thought about it for a second and realized that he too isn’t prepared for that, specially with all the things that we have with us. So we paid for the parking fee and started our hike down the beach which is about a hundred steps. 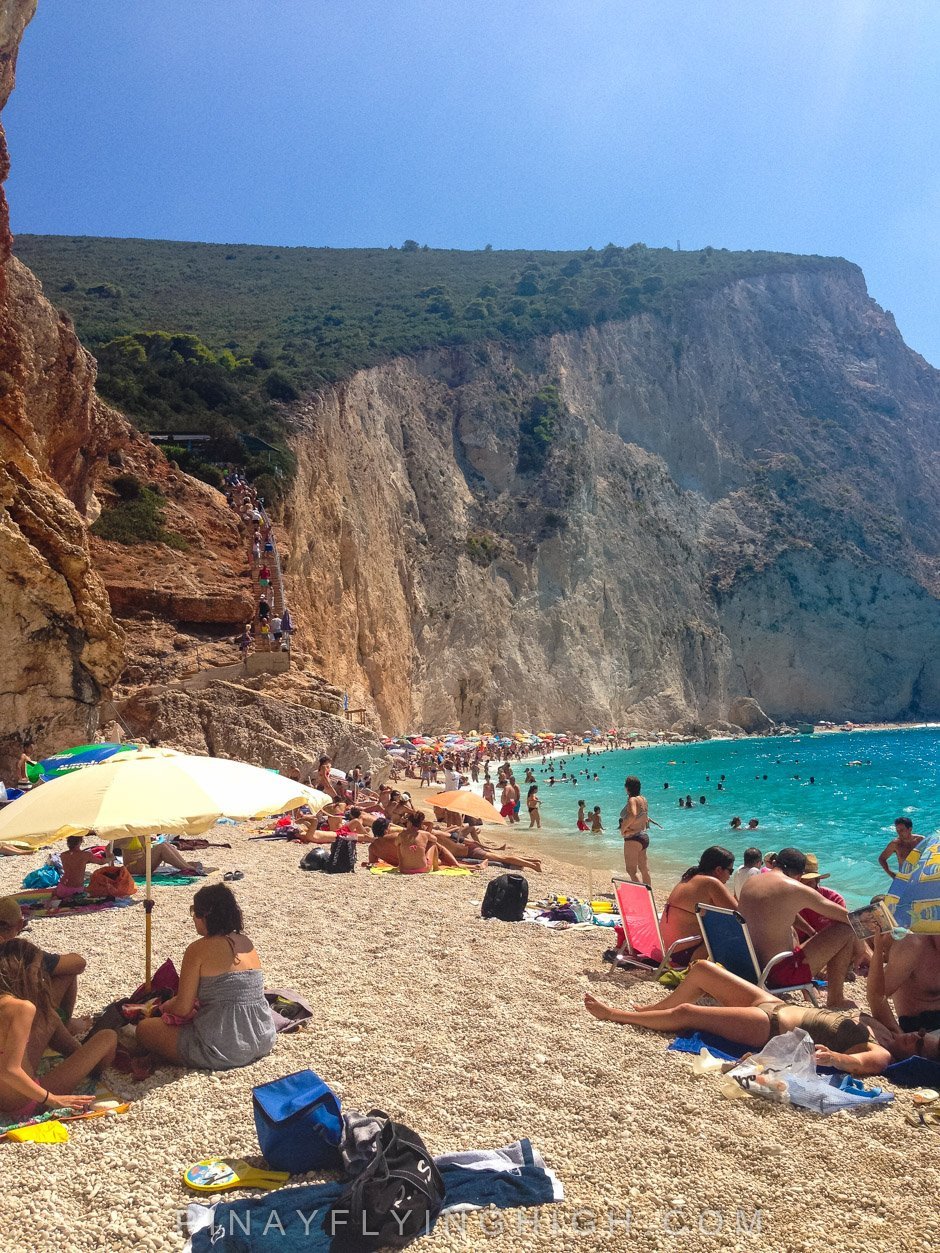 I have a slight fear of heights so the way down to the beach was quite hard for me. My knees were literally shaking everytime I took a step down. The steps were also narrow and 2-way. There was no railing on the right side of the steps so I basically have to balance myself with all the things that we brought with us. The boyfriend, sensing my fear and seeing that I am causing traffic jam of people on the steps took both the beach chairs from me. That last photo up there is the boyfriend in front of me. LOL. Funny that it’s hard for me to go down but I was still able to take some photos. :p 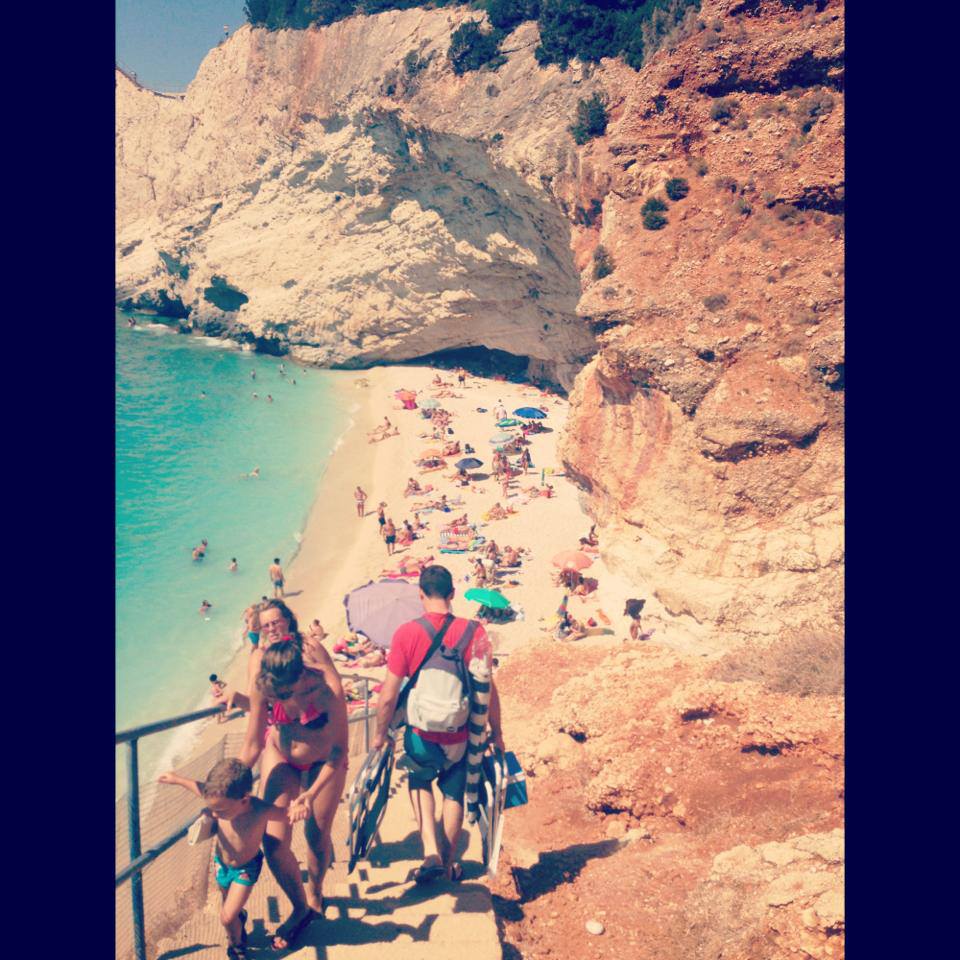 When we reached the beach, I was surprised that it was very crowded. September is supposed to have less tourists but it doesn’t feel like a lean season while we were there the whole time. I cannot imagine the number of people in this beach during August. It’s very beautiful though, the hike was worth it.

Despite of the number of people in this beach, it remains to be very clean. Most of the people staying there including us of course had a plastic bag where we put the trash. We will then bring it along with us on our way back to the parking lot to throw it in the bin. If you’re planning to go there, do practice this as well to preserve the cleanliness of this area. 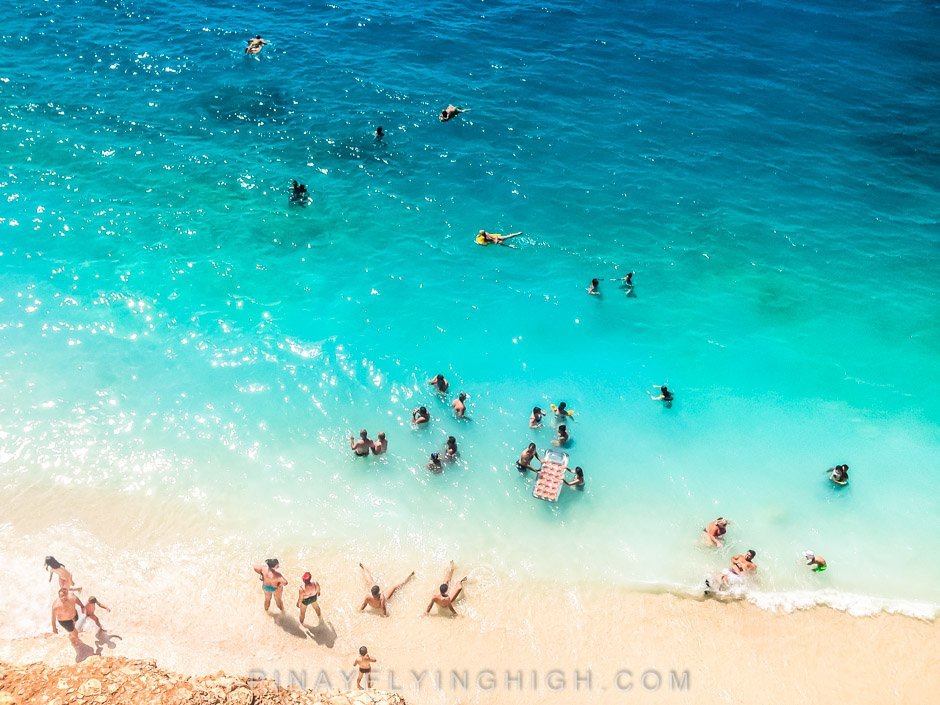 The beach is surrounded by rocky mountains which gives it a very scenic atmosphere. It’s a pebbled beach which actually became my favorite kind, the sea was a little rough though when we were there. The waves were too strong for a not-so-good swimmer like I am. The water is cool but not very cold, just enough to refresh you from the hike you just did.

There are no beach bars on the beach itself however, there are a lot of waiters from the restaurant back up at the main parking area who will deliver your food or drinks for you so you don’t have to climb back up again. They are roaming around the beach with a menu in their hands so they’re impossible to miss. Since we brought our own drinks and chips, we never asked for them. We stayed there for about 3 hours, me trying to get as much sun as I can while the boyfriend tried to drink as much beer as he can. LOL. 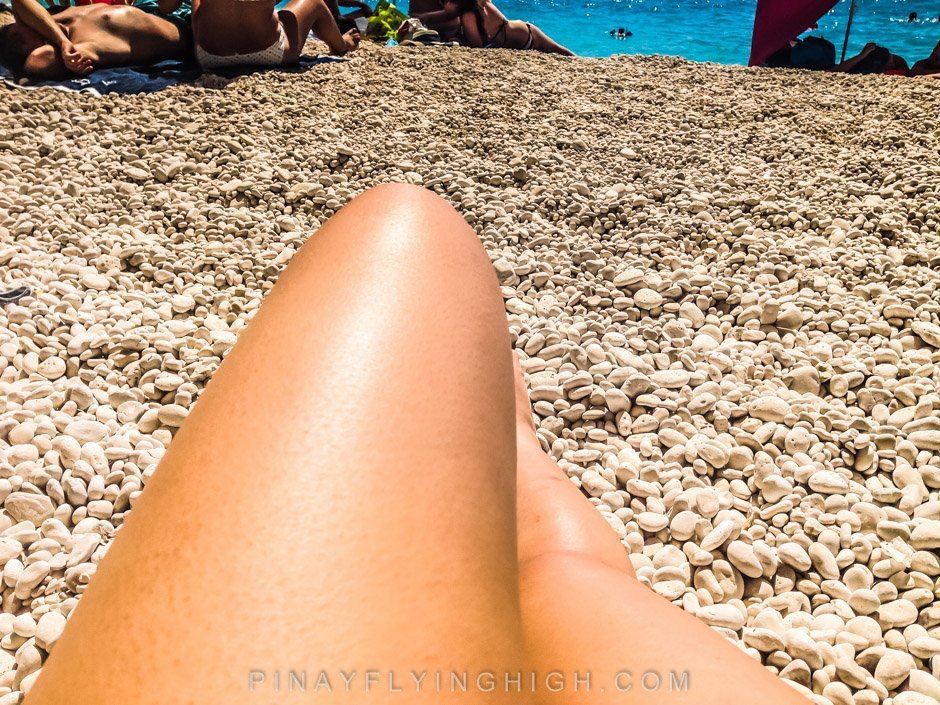 After playing with the waves, we started the dreaded hike back up. It was really very hard for someone like me. I was winded when I reached the top and I can literally hear my heartbeat in my ears. Somehow, I thought my heart was telling me that I am alive and that I need to do more cardios next time. LOL. I had to stop for about 2 minutes as soon as I reached the parking area just to catch my breathe, I swear I thought my chest would burst. As soon as my heart started to beat normally, I went to that one side of the parking lot where you can have the fantastic view of the whole of Porto Katsiki.

It was really amazing, I have never seen something like it. The splash of colors made it look like it was a masterpiece of a painter. The light blue color of the sea from the shore which gradually turns into dark blue, the cream-ish color of the rock which surrounds the beach and the greens of the fauna on top of the mountain – it truly is breathtaking.

The cliff looks like it’s been chiseled to form the beach. I asked the boyfriend what Porto Katsiki means and he said katsiki translates to goat. I later found out that it was named as such as only goats can reach it before. Well, those were some lucky goats.

It really is one of the best beaches I’ve ever laid my eyes on.

To avoid the crowd during the peak summer period of July and August, I suggest for you to go there early morning or late in the afternoon.
Bring your own beach umbrellas and beach chairs.
Bring your own drinks as well.
You can reach this beach as well by a cruise that you can book from Nydri and Vassiliki however, the cruises normally only stops there for about an hour. 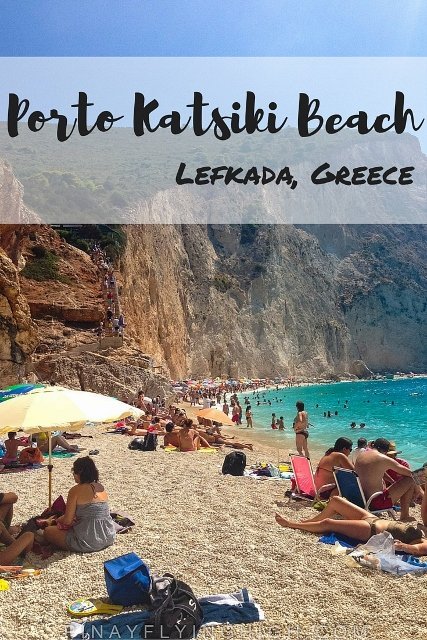