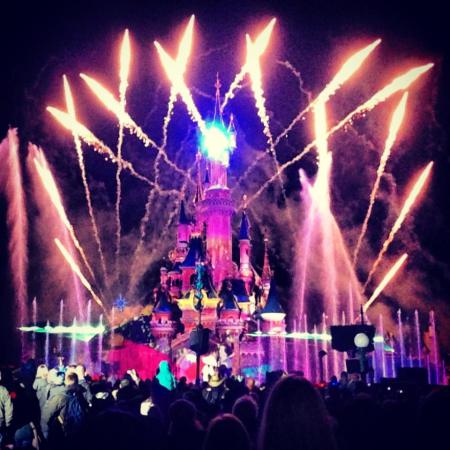 As a part of their 20th anniversary celebration, Disneyland Paris has launched a new show to end your day in Disneyland.

With the launch of the 20th Anniversary, the culmination of your day in the park will be just that: a dazzling, show-stopping ending combining fountains, fireworks, projections, lasers, fire, “never before seen” special effects, an all-new musical score and, most importantly: an epic story, all about the power of dreams.

It’s a sound, light, water, fire and fireworks all combined in one show. There’s no word that I can use to describe this show. It’s more than amazing! It’s more than great! It’s more than fantastic! I have had a few breathtaking moments and a lot of the time spent watching the show left me in awe. It’s grand! It’s massive! And it’s a show that you must never ever miss.The venue of course is the Sleeping Beauty Castle however, it does not have a particular time when the it will start as it all depends on what time is approximately the darkest during the night since it can only be enjoyed if it is dark, of course. During our visit, it started at 10pm. There were some people securing a good spot to watch it as early as 9pm though but since we have our VIP passes, we have our own area where we can have an amazing view of the whole show. It is free for all and lasts for about 30mins or so with different themes, songs and just one storyline.

I leave you now with some of the photos I took during the show and a video too. The quality of the video is too bad though and it doesn’t justify the greatness of the show. I’ll probably advise for you to visit their official website to watch it with better quality, it still however doesn’t justify how good this is – Disney Dreams! Nighttime Show.

Things To Do in Paris: Fall in love with Montmartre.

Things To Do in Disneyland Paris: Take the thrilling rides.