Things (NOT) To Do in Lefkada: Take The Nidri Star Cruises 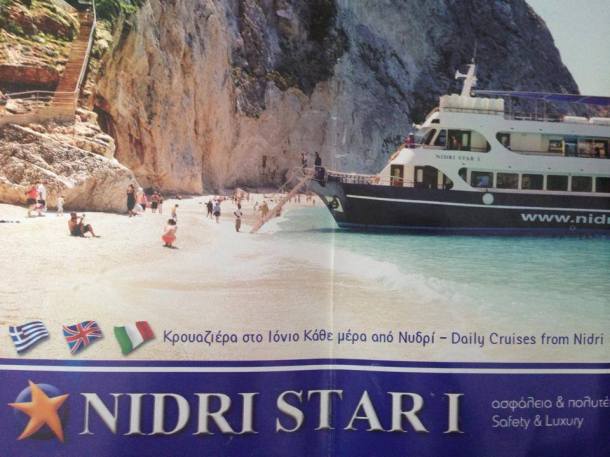 On our first day in Lefkada, we’ve seen a huge number of tourists get off the numerous boats used for cruising while we were having dinner at Greg’s Place. It should’ve served as a warning for us that it is a tourist trap but then it somehow got into me, the lure of being able to visit the nearby Ionian islands from Lefkada. We booked the cruise for EUR15 per person from a Nidri Star representative in Porto Katsiki. We had an open-dated ticket which we can use within 5 days from the day that we booked.

Just a piece of advice, Nidri Star Cruises is indeed a tourist trap and we can’t believe we have fallen for it. I can’t really blame the company though as the itinerary has been laid out to us and I didn’t do any research about the places that we’re going to visit – how far all those places are from each other and what are the things that we will see while there. I am used to taking island hopping tours while in Southeast Asia where all of the islands and things to see are just near each other. Well, it’s a lesson learned the hard way for us – we must always do our research. 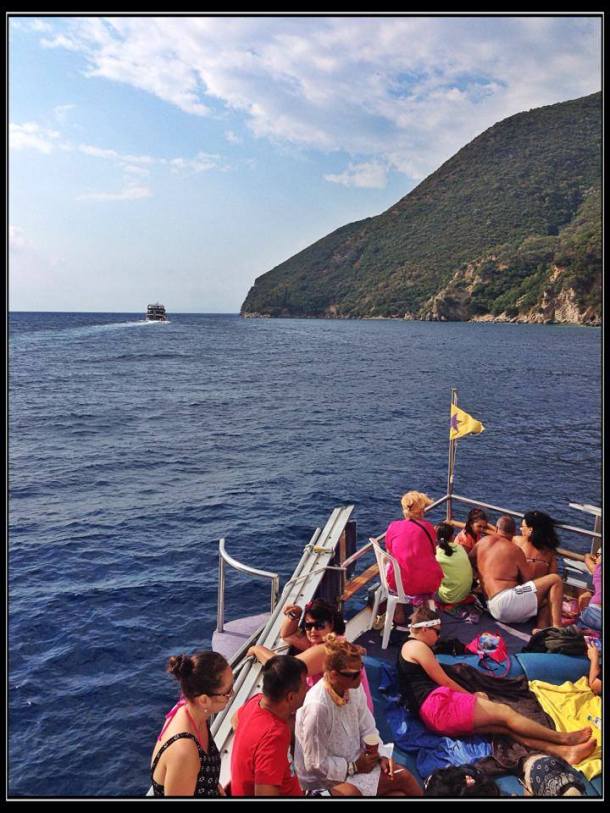 The cruise departs at 10 in the morning from Nidri port and arrives back at around 6 in the evening, it was a whole day wasted for us. We could’ve spent it exploring Lefkada on our own and would’ve been more worthwhile. Also, I got seasick while doing the cruise. I didn’t throw up or anything but just the feeling of dizziness the entire time. I couldn’t wait to get out of the boat when it finally docked back at Nidri port.

Although it doesn’t work well for us, some people may actually enjoy it. Here are the good things about taking this cruise:

It’s cheap! For only EUR15 per person, you’ll be able to see a lot of other nearby islands from Lefkada.

It’s a fully-equipped boat with restrooms and a small cafeteria where you can buy refreshments and barbecues. It was a good barbecue that they served us, of course that’s an extra fee.

The views of the island are amazing from the boat itself.

They have an Egremni beach stop which will make it more easier for you instead of the alternative way of going there – 300++ steps from the cliff.

And here are the things that I didn’t like about the cruise:

It only stops 50 minutes maximum in all of the places which makes the whole trip very tiring. Getting off and on the boat for every single stop which only lasts for a couple of minutes. You won’t be able to explore much of the island that you’re visiting. Well actually, you won’t even be able to finish your glass of beer if ever you ordered one.

It’s crowded! We always had a hard time getting a seat for us because some people will go back to the boat much earlier than the departure time so they can secure their seats ahead. I’m not sure how much time they spent in each of the islands as clearly, they are more concerned on getting a seat rather than seeing the islands.

And when it’s crowded, it becomes dirty.

They said that they’re going to have a stop at Porto Katsiki but didn’t. Stop for them means anchoring the boat a few hundred meters from the shores of Porto Katsiki where you can still get a view of the beach but not actually be there. It’s pathetic. Good thing we already went there, it would’ve been such a waste for all the others on the boat. I later found out that the cruise ships are not allowed to dock in Porto Katsiki anymore.

And here is our itinerary:

I have made different posts about those two beaches so you can probably just click on the links to know more about it. Here is the view of Porto Katsiki from the boat: 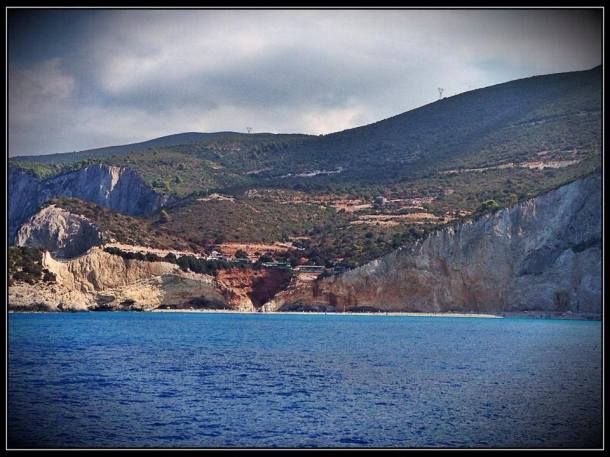 Fiscardo is a small village in the island of Kefalonia, the largest of the Ionian islands. It’s very charming and the port is packed with tavernas and souvenir shops, I guess to make it easier for the cruise passengers to be able to shop and have a drink. We really weren’t able to see much of it again because of the very little time that we have to spend there. It seems to be a very nice island though, made me think that I should visit it next time and stay there for a couple of days. 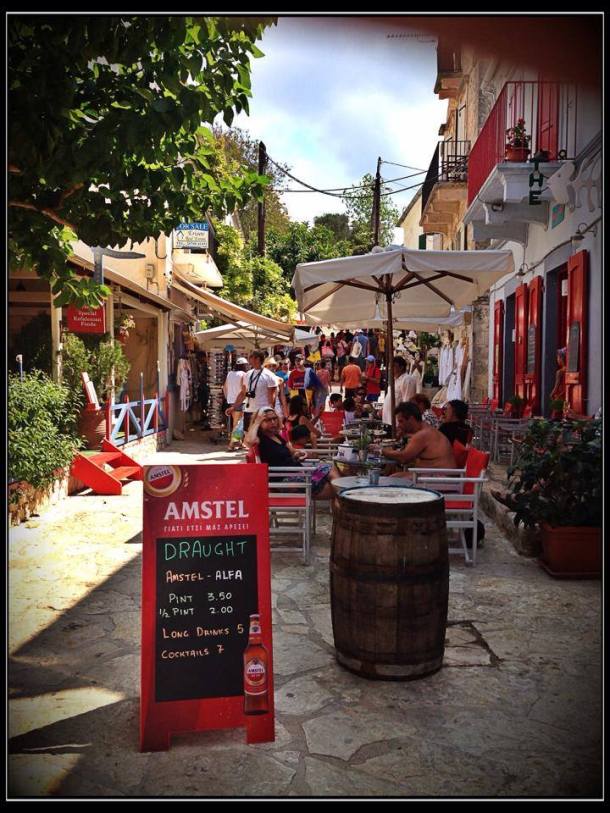 Ithaca is another island in the Ionian sea which looks quite romantic. I’m not really sure why but it just have that vibe as it’s quiet and a very traditional village. We had coffee at one of the tavernas near the port and it’s quite a scenery from there. Some people went for a swim in the nearby beach and they almost missed the boat’s departure. 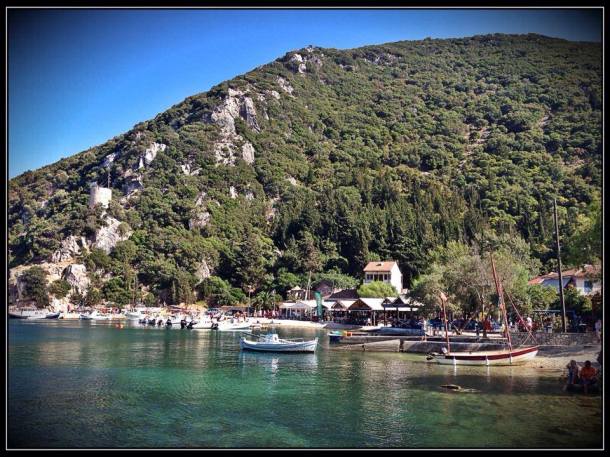 This stop is useless. I’m not even sure why it’s included in the itinerary as there really is nothing spectacular about the cave other than it was used as a hideout of Iatridis, captain of the legendary submarine Papanikolis during the World War II. Well ok, I’m not Greek but even the boyfriend who got so excited to see it and insisted that we sit in front of the ship so he can have a better view of the cave once the ship gets inside was highly disappointed. I think a quarter of the ship was inside the cave for a mere 5 minutes before we went ahead to our next stop. 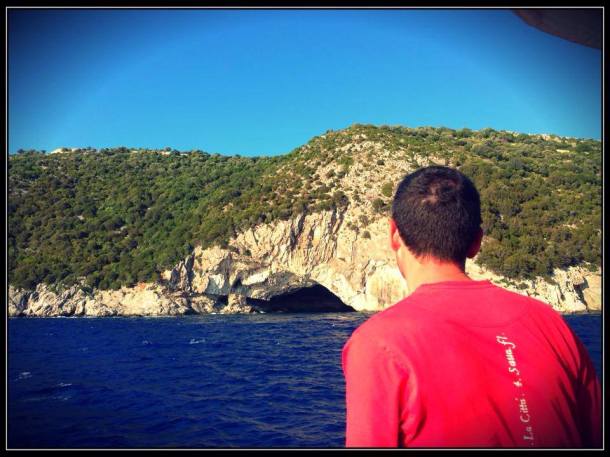 On the way to the cave.

The three islands of Onassis which are now owned by a Russian millionaire. We just passed by it but we didn’t even dock at any beach of the islands as it is no longer allowed. We did stop though a few meters from Scorpio so that some people can swim. One of the passengers of another cruise ship almost drowned and the staff of the boat were all quick to respond and was able to get the guy in the boat safely. We didn’t go for a swim and at this point, we were just happy that the cruise is almost over. 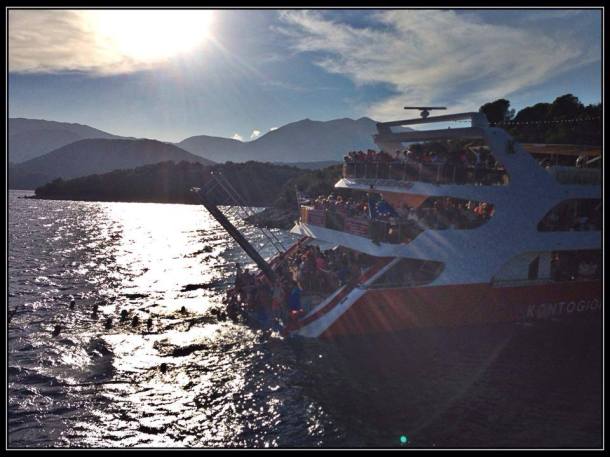 The island on which the Aristotle Valaoritis the poet was born. Again, we just passed by it. 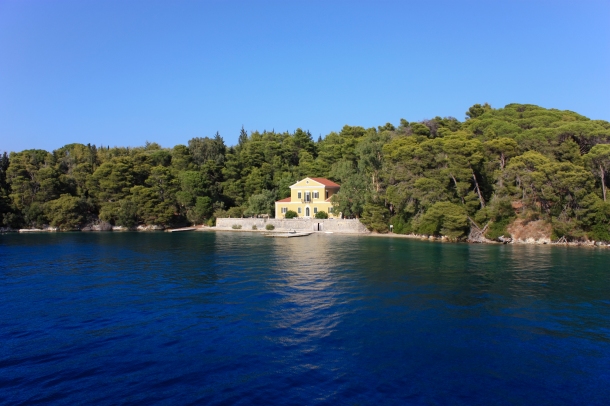 After that, we were back in Nydri! Woo hoo! It really was a tiring journey for us and a very useless day. I really hope I could turn back time and have just spent that one day lying on the beach of Egremni. Oh well. 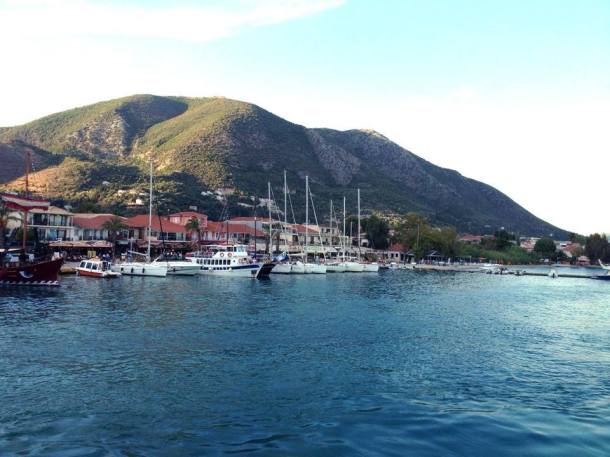 PrevPreviousThings To Do in Lefkada: Let The Paradise That Is Egremni Beach Take Your Breathe Away
NextThe (UN)official Travel Guide of LefkadaNext