Things To Do in Dubai: Sundowner Safari by Arabian Adventures 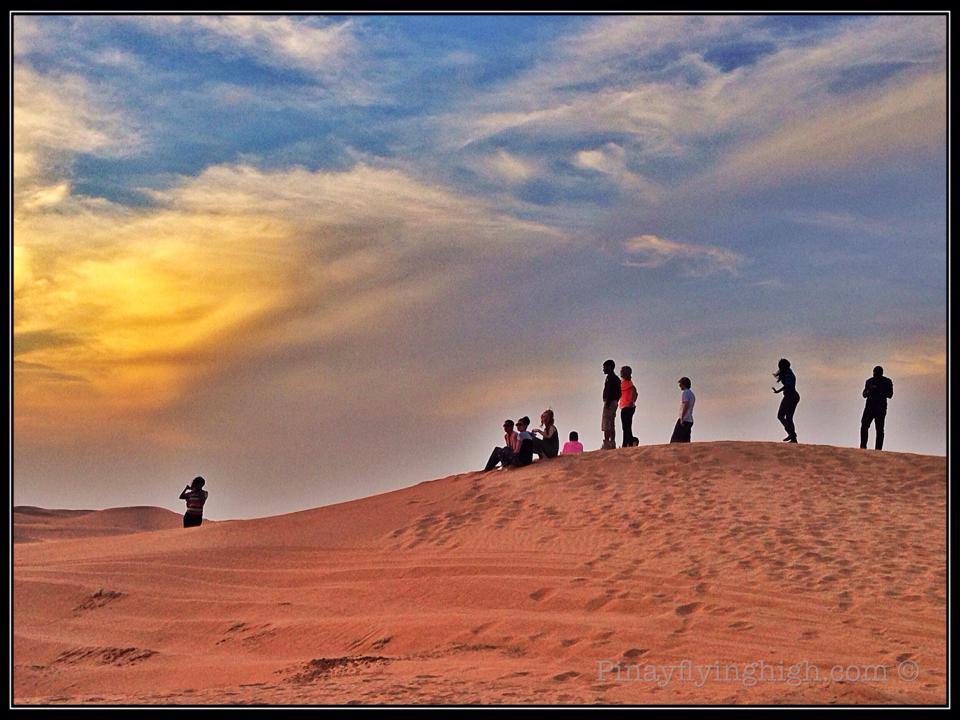 Whenever I have visitors coming over Dubai, I usually recommend for them to do a desert safari which I think is a very unique experience and will give you great memories of your visit in this region. I only deal with one safari tour operator – Arabian Adventures. Priced at AED360 per person, it’s actually quite expensive compared to the other desert safari operators, but every single penny is totally worth it. Trust me.

I remember my very first desert safari 7 years ago and I took it from a random safari tour operator which was then priced at AED99 per person. We enjoyed it of course as I didn’t have any other desert safari experiences to compare it to. I vaguely remember the whole experience but what really got stuck in my mind was that the camp was too crowded. There was a long queue to the toilet and with the amount of people using it, the cleanliness of course was not properly maintained. I distinctly remember as well the stampede of people going towards the buffet table as soon as it was announced that they were ready to serve food. I never really thought much about it as I still had fun anyway. However, as soon as I’ve tried Arabian Adventures’ Sundowner Safari – I suddenly felt like I’ve been ripped off by the first tour operator that I’ve used before. LOL. I’ve never used any other desert safari tour operators other than Arabian Adventures from then on. 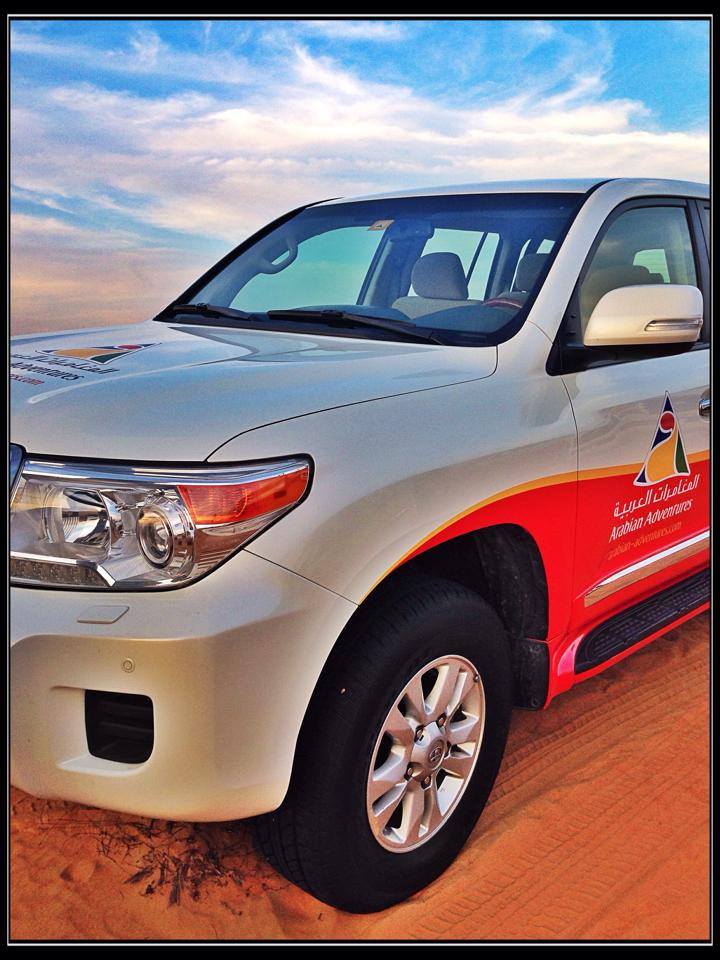 When the boyfriend’s mother and aunt came to visit, I booked an Arabian Adventures’ sundowner safari for all for 4 of us including the boyfriend. The Toyota land cruiser picked us up from The Address Dubai Mall at exactly 3:30pm and from there, we started our drive towards Dubai Desert Conservation Reserve which took about 40 minutes. We arrived at the reserve and we had a short falcon show (we never had this before). The show was interesting; it gave us some important facts about Dubai’s falconry and even demonstrated how the falcons were trained to hunt. Sodas and water were offered during the show, all included on the price that you’ve paid. 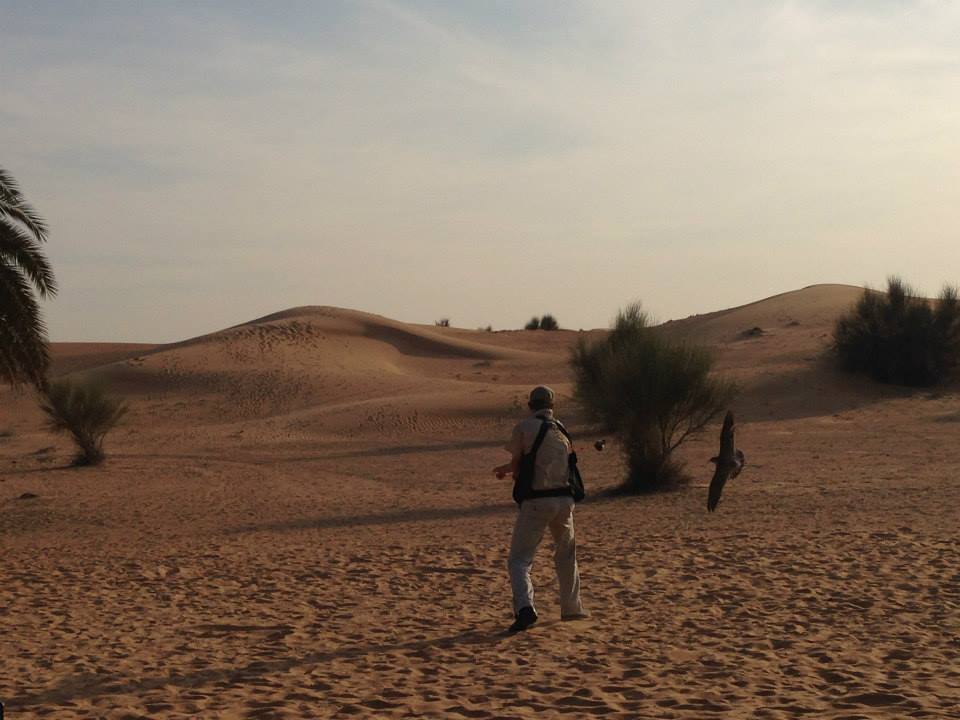 After the show, we finally went on a dune drive which was exhilarating! I have done the desert safari more than 5 times now and I still get that nervous feeling whenever our 4X4 vehicle goes up a dune without really knowing if we will make it to the top or not. Our driver Adnan was very skilled and he seems to love desert driving. I believe he loves to push his passengers to the limits so we were tossed and thrown into the high dunes at random angles. He does it with ease and full confidence so we were all confident as well that we were in good hands. 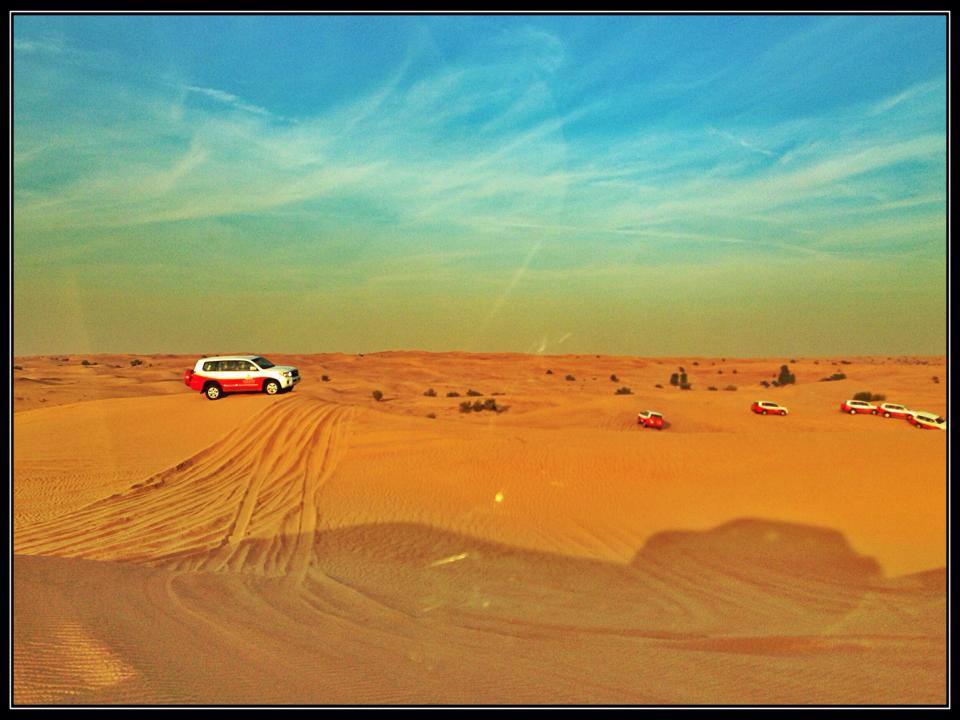 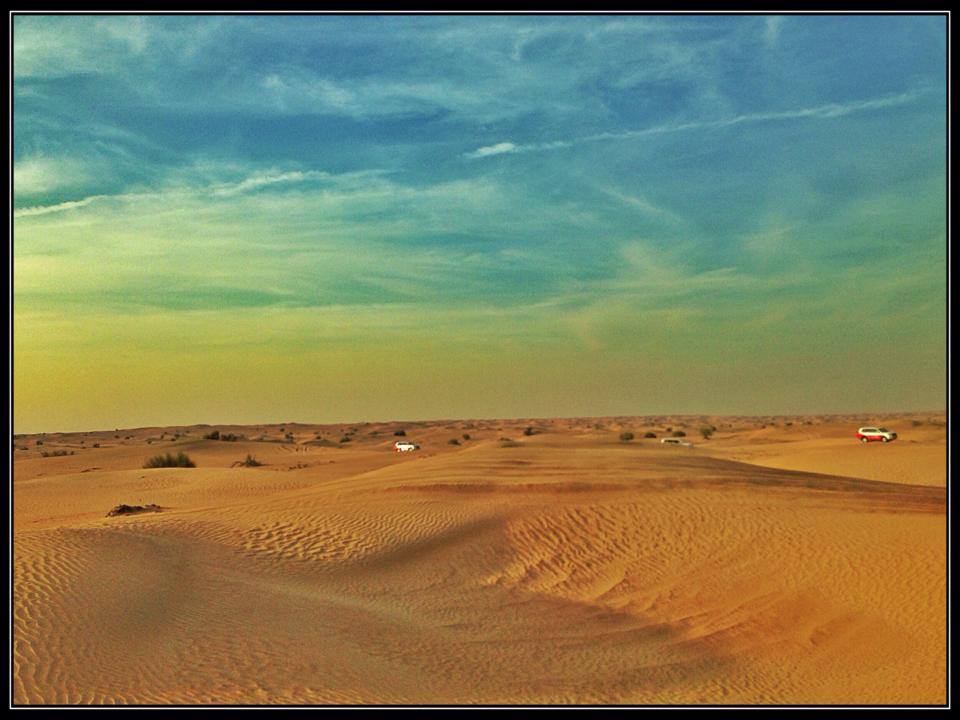 We had our first stop for desert viewing, we had to climb up a high dune on foot to get magnificent views of the desert. It was quite windy and chilly so going up the dune was quite a hassle but still, it was worth it. We stayed here I think for about 10 minutes and then went off for another dune drive before stopping for sunset viewing. 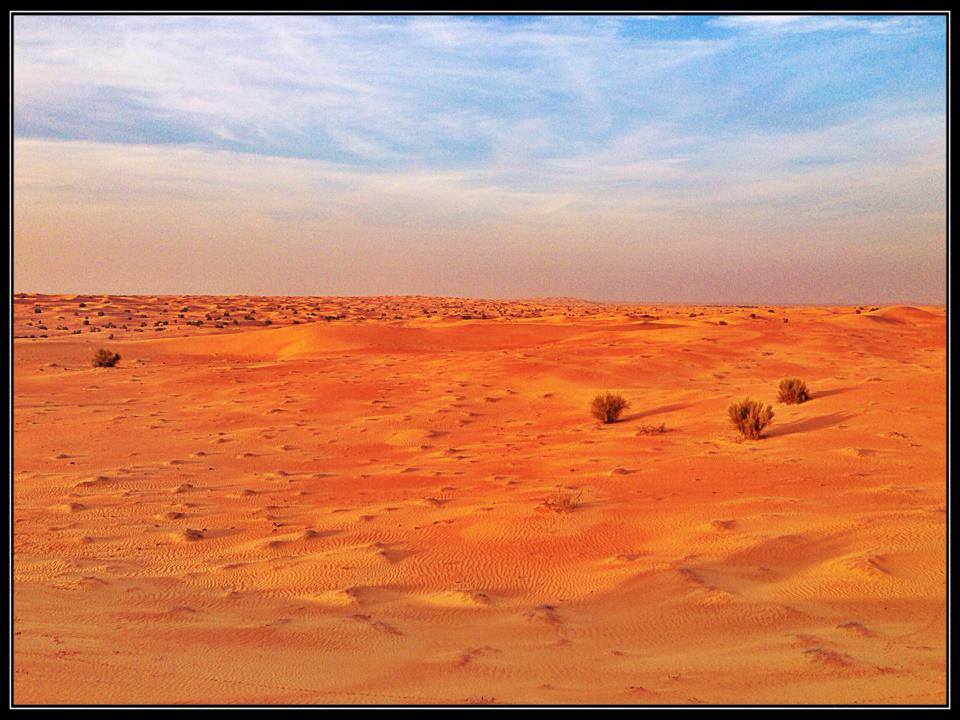 It was cloudy so the sunset view that we had was not that great. Still, it was a great photo opportunity. After this stop, we went straight to the Bedouin camp which of course is a replica of an original camp but it was really impressive and well-maintained. The toilets of course was packed as soon as all the vehicles arrived and yet, the cleanliness was kept.

They offered a welcome drink to us which of course were Arabic tea and dates. Our driver advised us to find a table first and leave our things there before engaging ourselves into all the other activities that we can do inside the camp such as camel riding, henna hand painting and aromatic shisha. Well, none of those activities seem to attract my visitors as they all went straight to the bar and asked for a bottle of beer. So I had one myself, great! Yes, they do serve alcohol inside the camp. 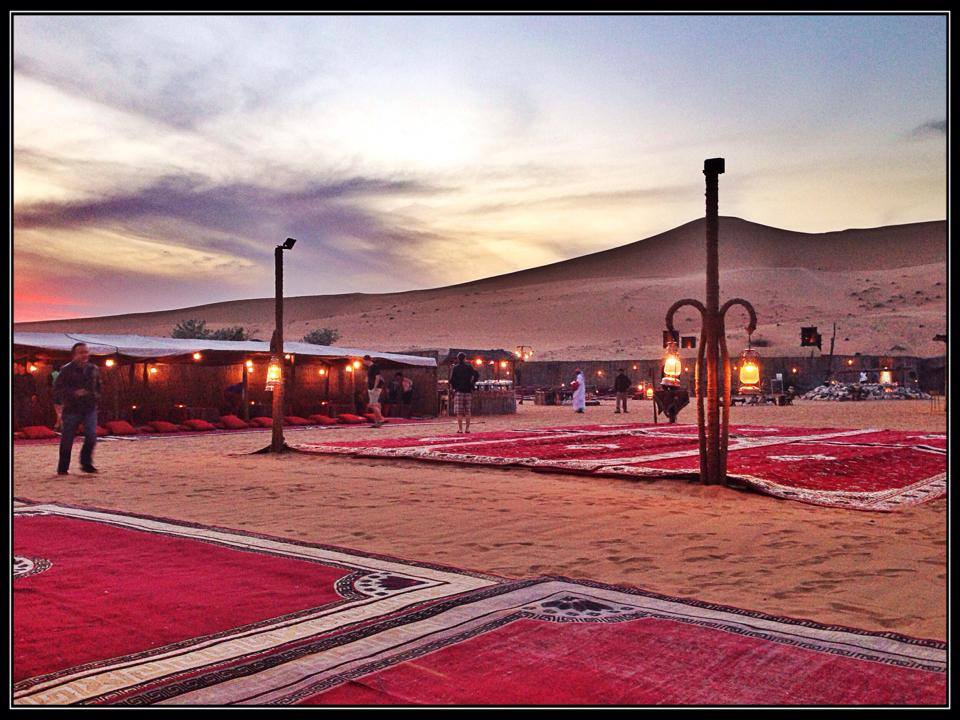 After a few minutes, they started serving the appetizers and then the main courses. There was no stampede whatsoever and the buffet table was properly handled. All the buffet tables were all manned by staff to assist the diners so that there will be no long queuing time. The food was great and very tasty! They had an array of Arabic appetizers and salads for starters and for the mains they had grilled lamb chops, grilled chicken, grilled kebabs and grilled beef. It’s a very Arabic fare on the buffet table and I doubt that the falcon caught all those. 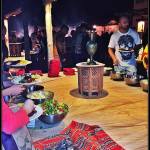 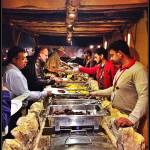 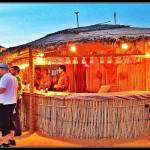 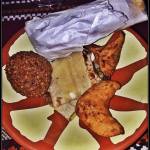 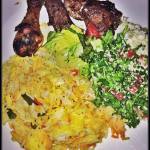 My plateful of Arabic food.

A belly dancer was also performing as we had our dinner. It was tastefully done, you can tell that the dancer was professionally trained and not just someone they randomly picked up along the way (in the middle of the desert dune driving maybe? I kid). 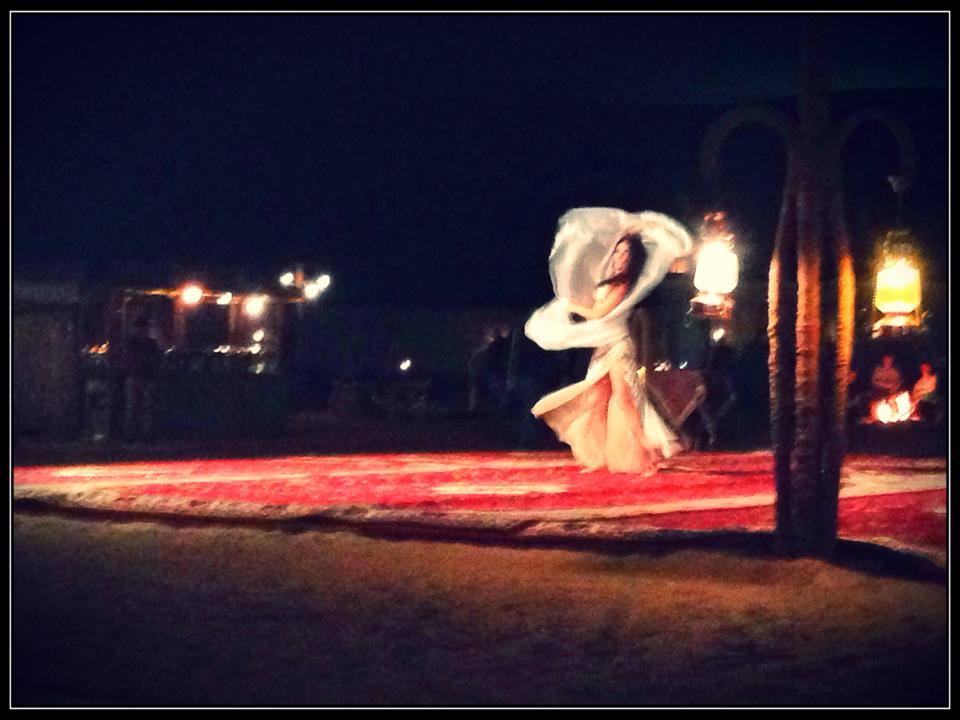 After all the festivities, they announced that they will be turning off all the lights for 5 minutes for a star-gazing “moment”. It was still very cloudy though so we didn’t see any stars. We left the camp at around 8pm still on-board our 4X4 vehicle. We arrived back to the civilization at around 9:45pm.

It was a very well-organized tour with a very well-maintained camp. I don’t think any other tour operator can beat their service.

There’s a big BUT there, their call center service is extremely horrible. I called up their call center to reconfirm which The Address hotel will we be picked up but I was just kept on hold for 15 minutes, no one answered my call. I have read the same reviews on tripadvisor, call centre service is horrible and all praises for the sundowner safari staff. So I guess you should just avoid booking their services thru their call center and go directly to any of their travel desks/offices.

The Sundowner Safari includes the following:

Note:
Alcoholic drinks and belly dancer are not included in the package during Ramadan.
Best to do during winter as it might get too hot during the summer in the desert.
Pregnant women and people with back problems are not allowed to join the safari for safety reasons.
Passengers who are 65 years and above will be asked to sign a waiver before the safari.

For more photos, please do visit my Facebook page: Arabian Adventures’ Sundowner Safari Album
All photos taken by my iphone5 which explains why the night time photos were all crap. 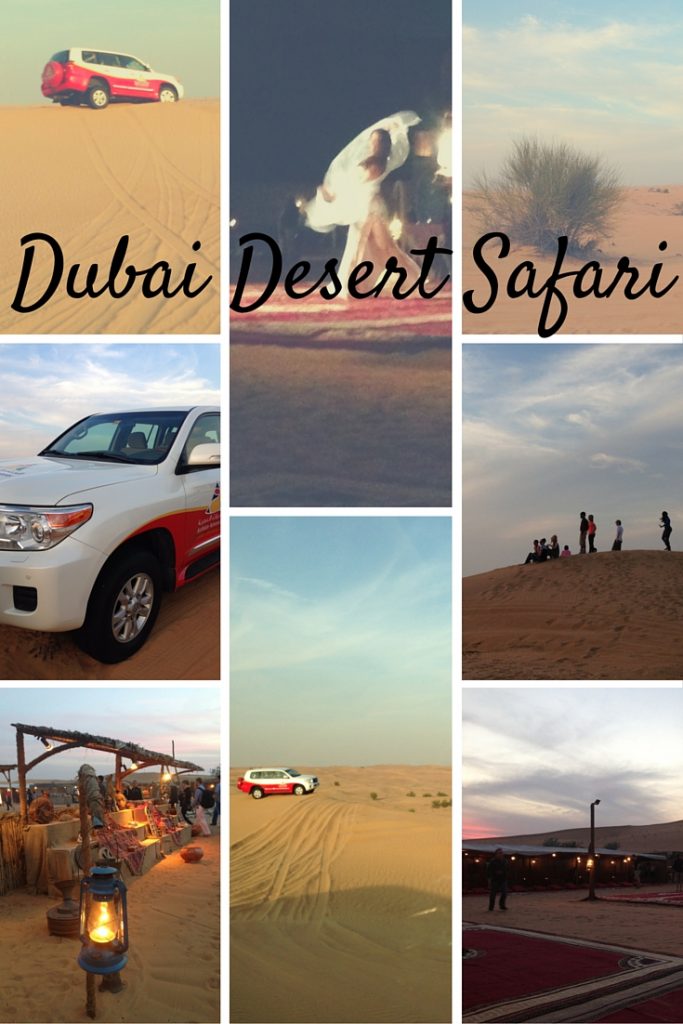