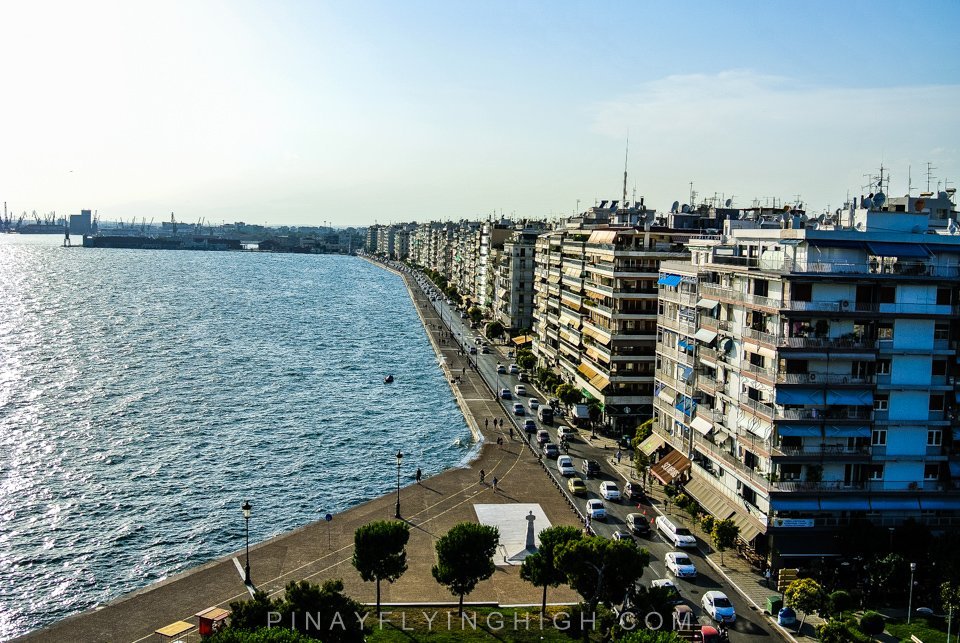 Thessaloniki, the second largest city of Greece. Popular to the younger crowd for its hip and vibrant dining and nightlife scene. A city rich of history and culture, you’ll never run out of things to do here. I go to Thessaloniki almost every year as this is The Greek Mister’s hometown. I’ve personally tried all of the establishments mentioned on this post as a paying customer (unless otherwise stated) and these are my own personal recommendations. You may click on the live links for a separate blog post that I’ve written. 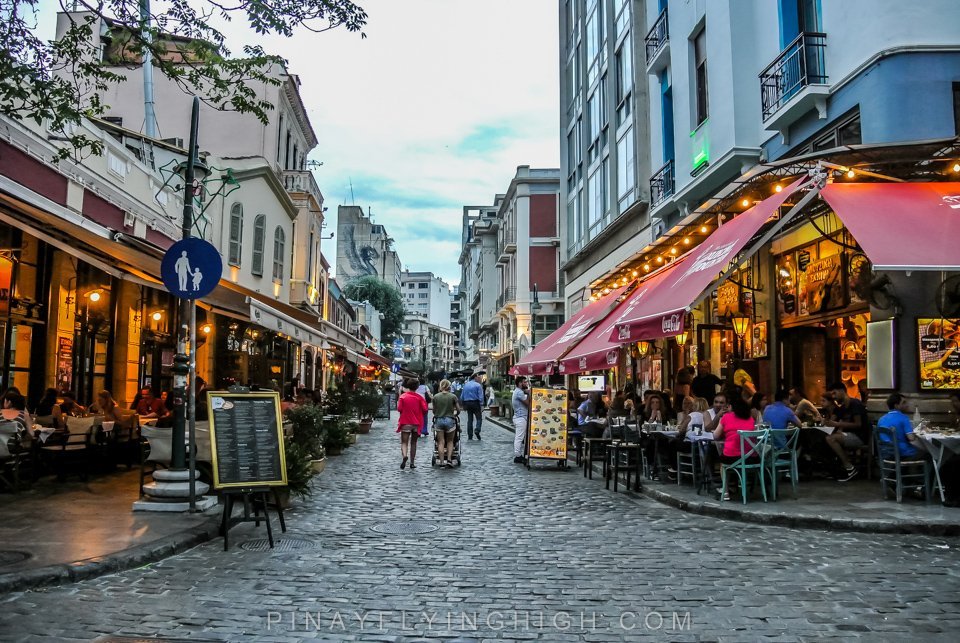 The old historic district of Ladadika is my favorite place in Thessaloniki. Here you will get a taste of the city’s vibrant dining and nightlife scene with the preserved buildings and cobblestone streets around you. It is where the old merges with the new in Thessaloniki.

The waterfront promenade of Thessaloniki pulls the biggest crowd specially during sundown. From the sights and sounds of the bustling Aristotelous Square to the White Tower, the emblem of the city. A stroll along this area is something you shouldn’t miss, a good exercise to burn all the gyros eaten for the day. 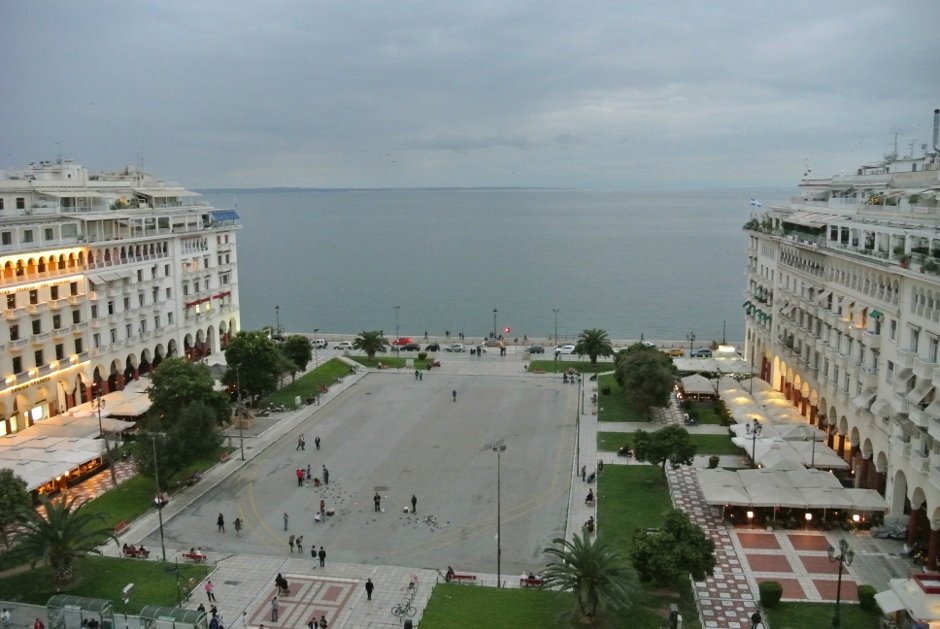 Aristotelous Square is Thessaloniki’s main city square and is one of the most impressive squares in Greece which offers an amazing view of the Thermaikos Gulf. It boasts numerous monumental mansions which has been designed after the devastating fire in 1917. Coffeeshops are lined up in this area and is a great place to just sit, relax and enjoy the vibrant atmosphere. 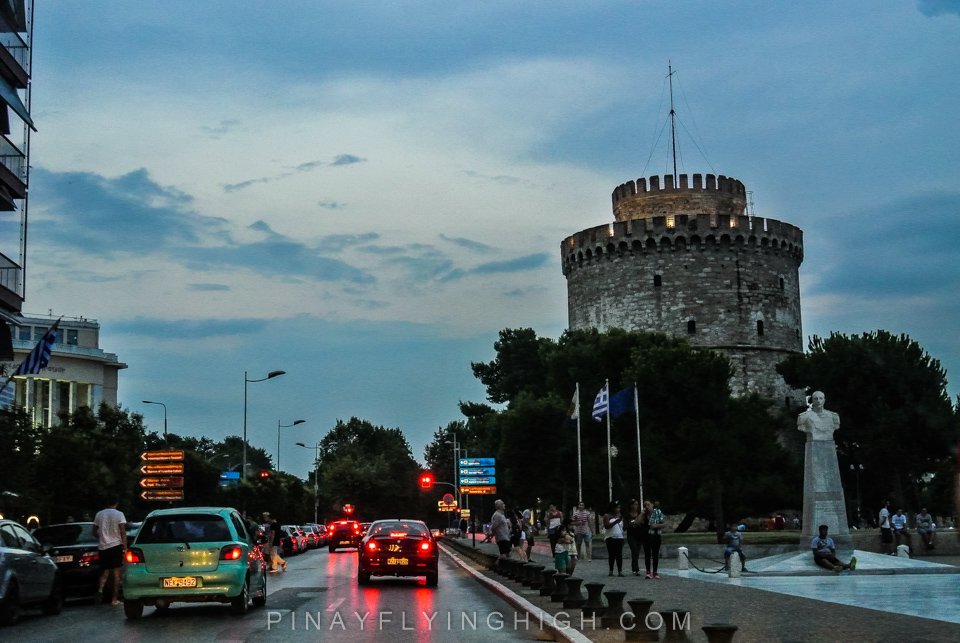 The emblem of Thessaloniki is the White Tower. It was a prison and a place for mass executions during the Ottoman Empire. Now, the White Tower is a museum which holds an exhibit showing the history of Thessaloniki. The observation deck gives you an unobstructed view of the whole stretch of Nea Paralia. Absolutely worth the climb!
Entrance Fee: EUR4 per person.

ROTUNDA AND ARC OF GALERIUS 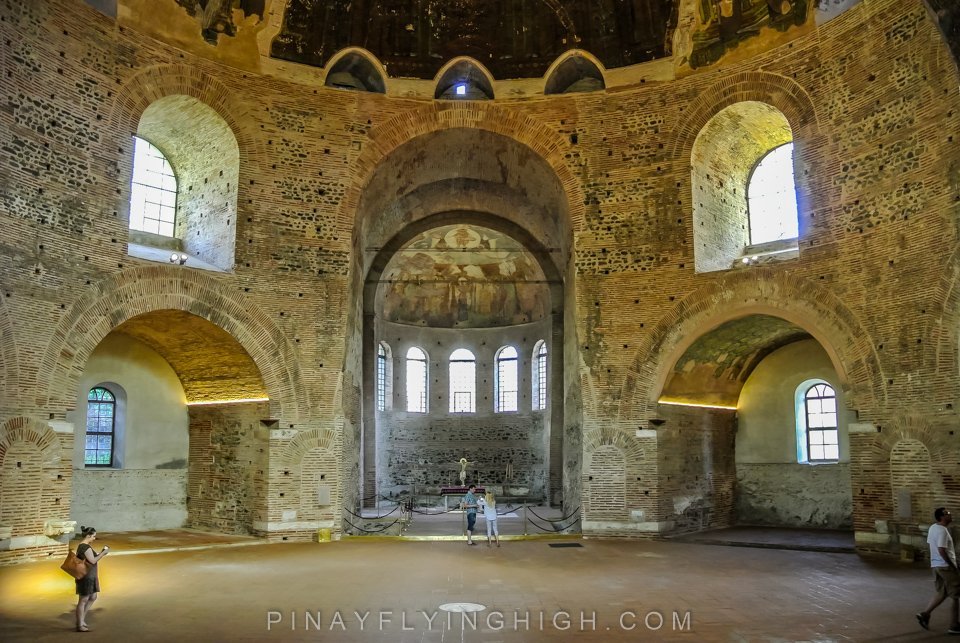 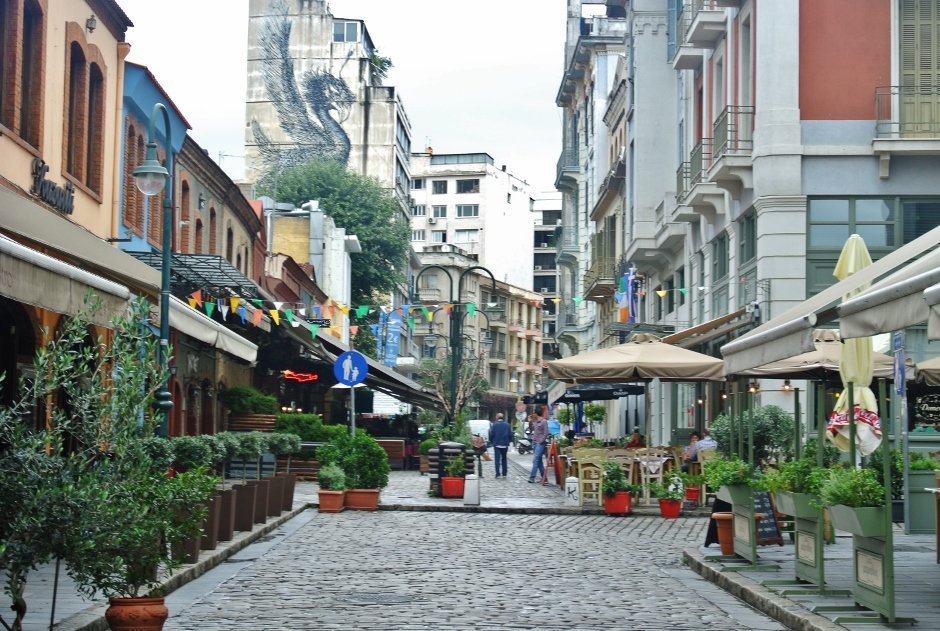 A taverna in Ladadika which serves traditional Cretan dishes. I had my first taste of fava here which is a traditional Greek dish of yellow split peas. 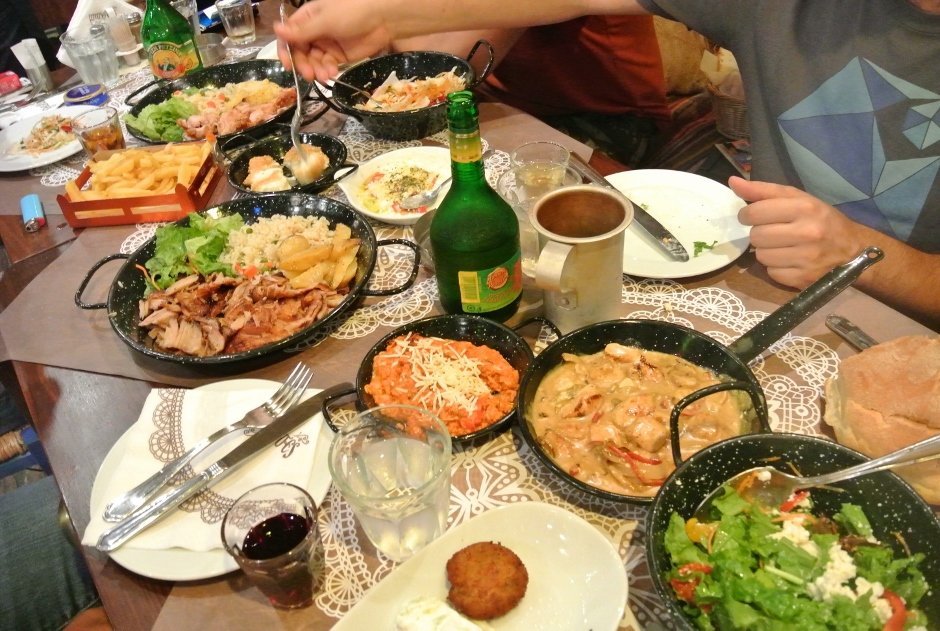 The cheapest meal I’ve ever had in a taverna is in Baxtses. Try out their gyros on a plate, ammmmazing! 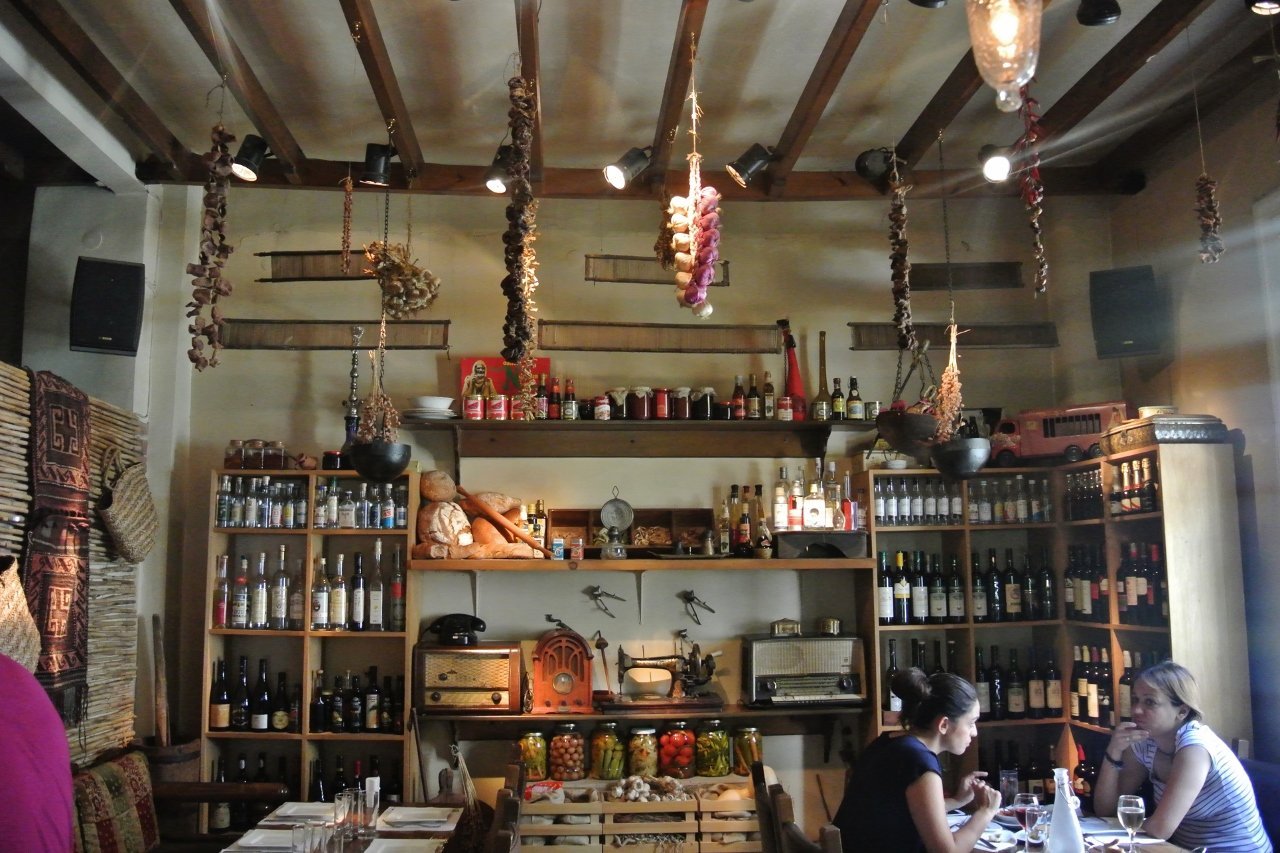 Molyvos offers a vintage dining experience with a modern cuisine in the heart of the city. Try out their tigania. 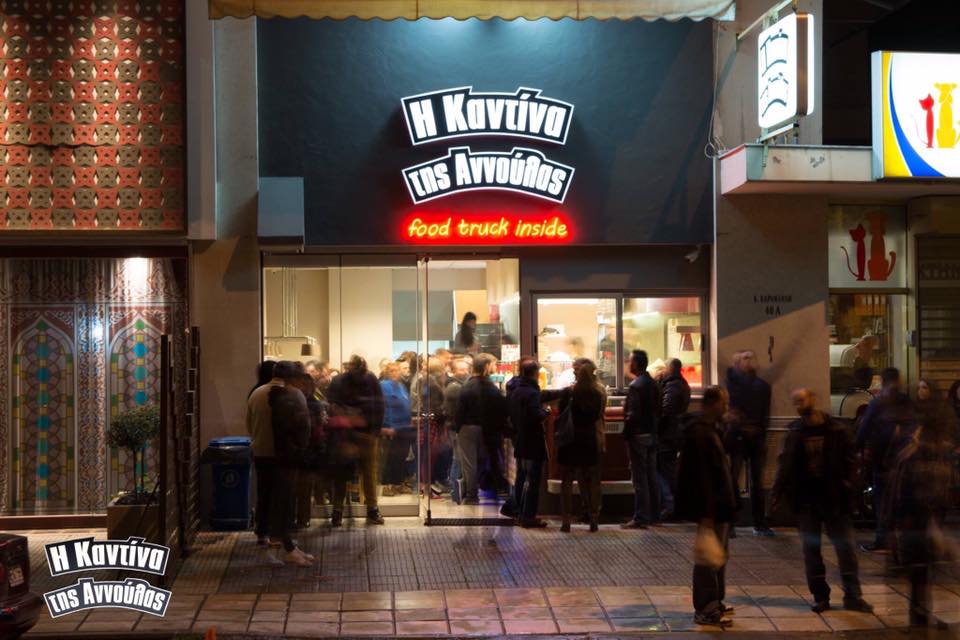 I Kantina Tis Annoulas is a foodtruck turned to a proper small restaurant. Packed every early mornings by patrons who are all looking for good ‘ol gyros to satisfy their hungry stomach after a nightout. 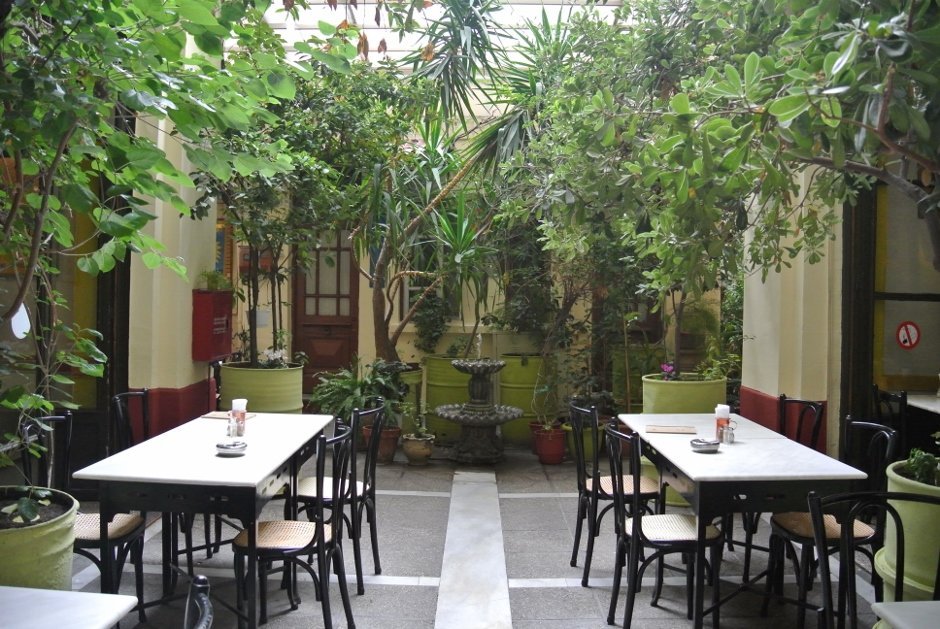 Ouzeri Aristotelous is a hidden gem only the locals are supposed to know (they don’t have English signage outside the building that they’re in). If you’re lucky enough to find it, try out their amazing seafood dishes paired with traditional ouzo. 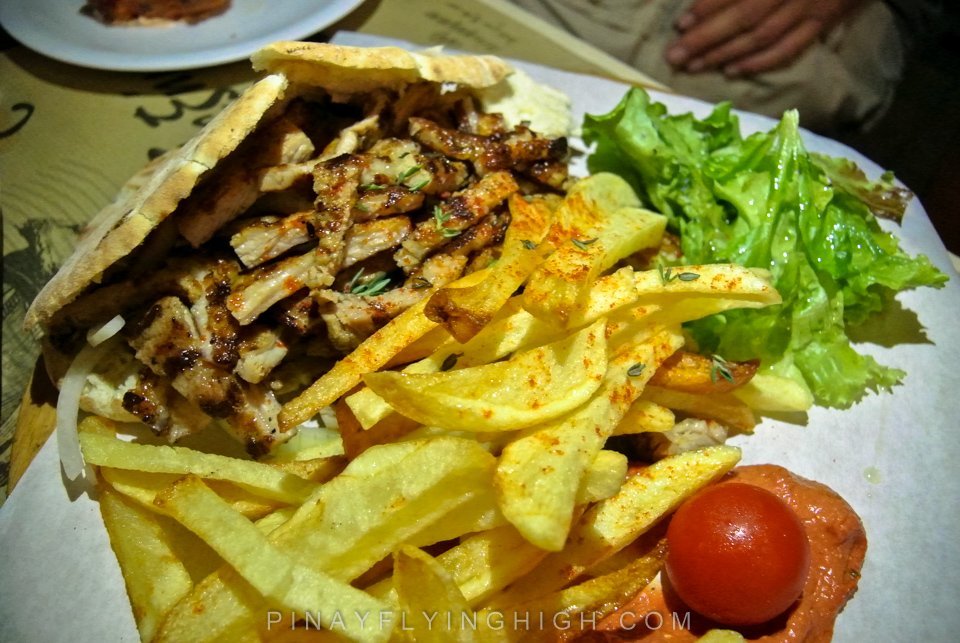 If traditional gyros is what you’re looking for but are too cautious to try out a kantina, head over to Treis Ki Exinda which offers the best (semi gourmet-style) gyros I’ve ever had. 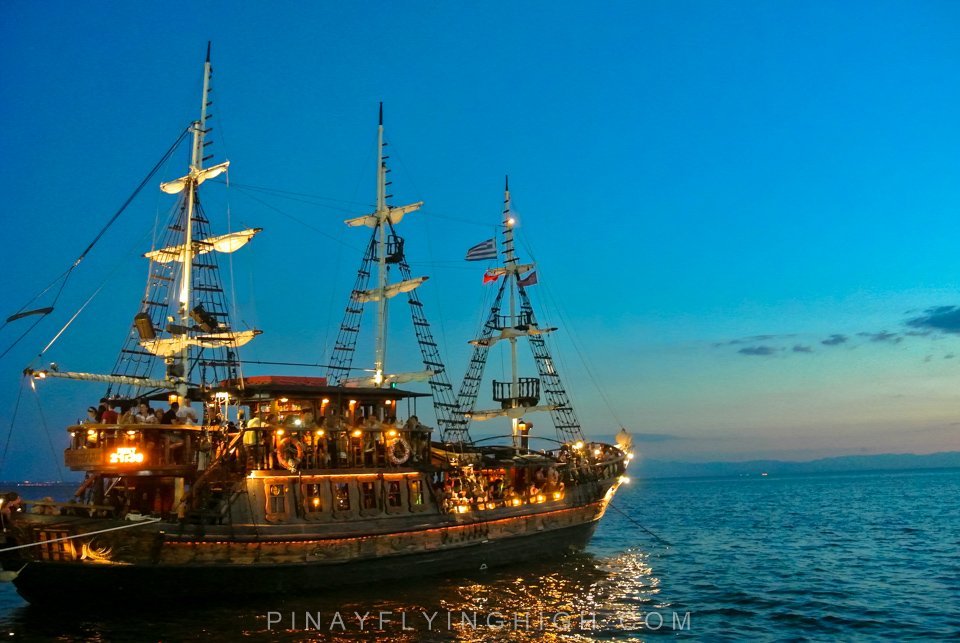 A lot of boat bars are docked along Nea Paralia which sets off to sail every so often. Sail away during sunset as you sip your drink with the view of Thessaloniki to entice you. 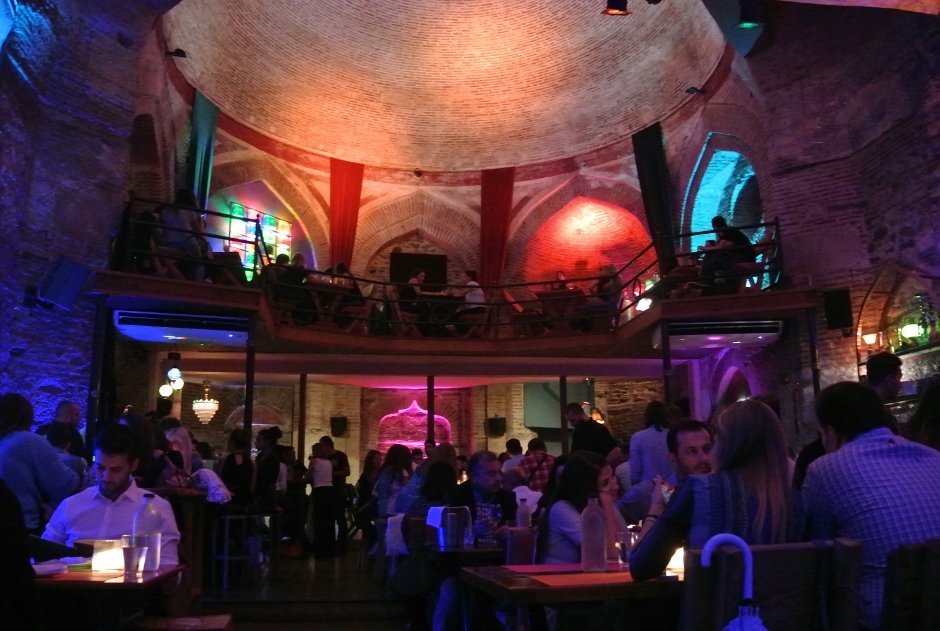 A Turkish hamam turned bar/restaurant, Aigli Geni Hamam is possibly the most unique bar I’ve ever been to. Their cocktails are all superb! 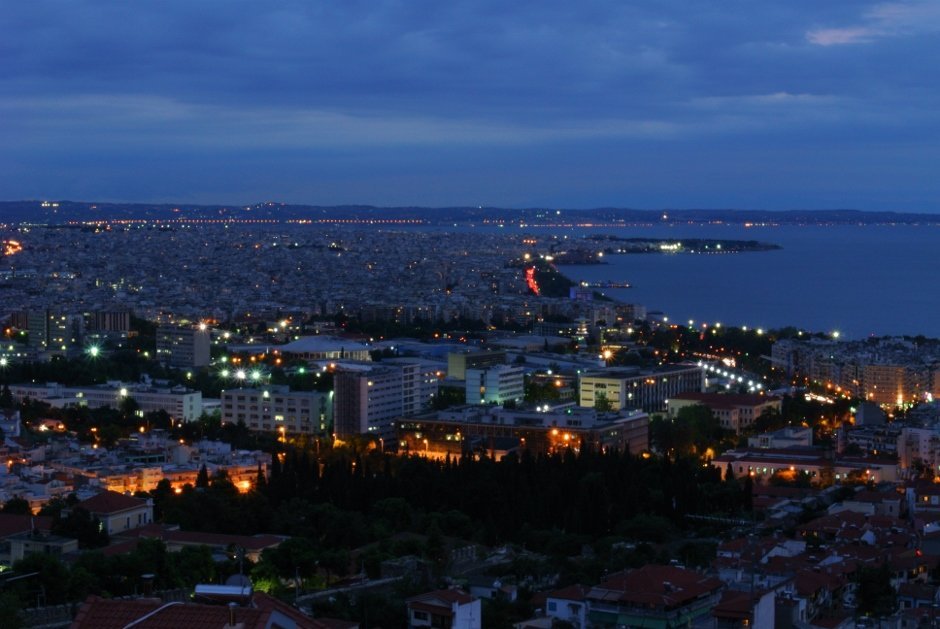 Castra Cafe Bar offers an unobstructed view of the whole city of Thessaloniki and the Thermaikos Gulf. Catch the sunset from here and make sure your camera battery’s fully charged! 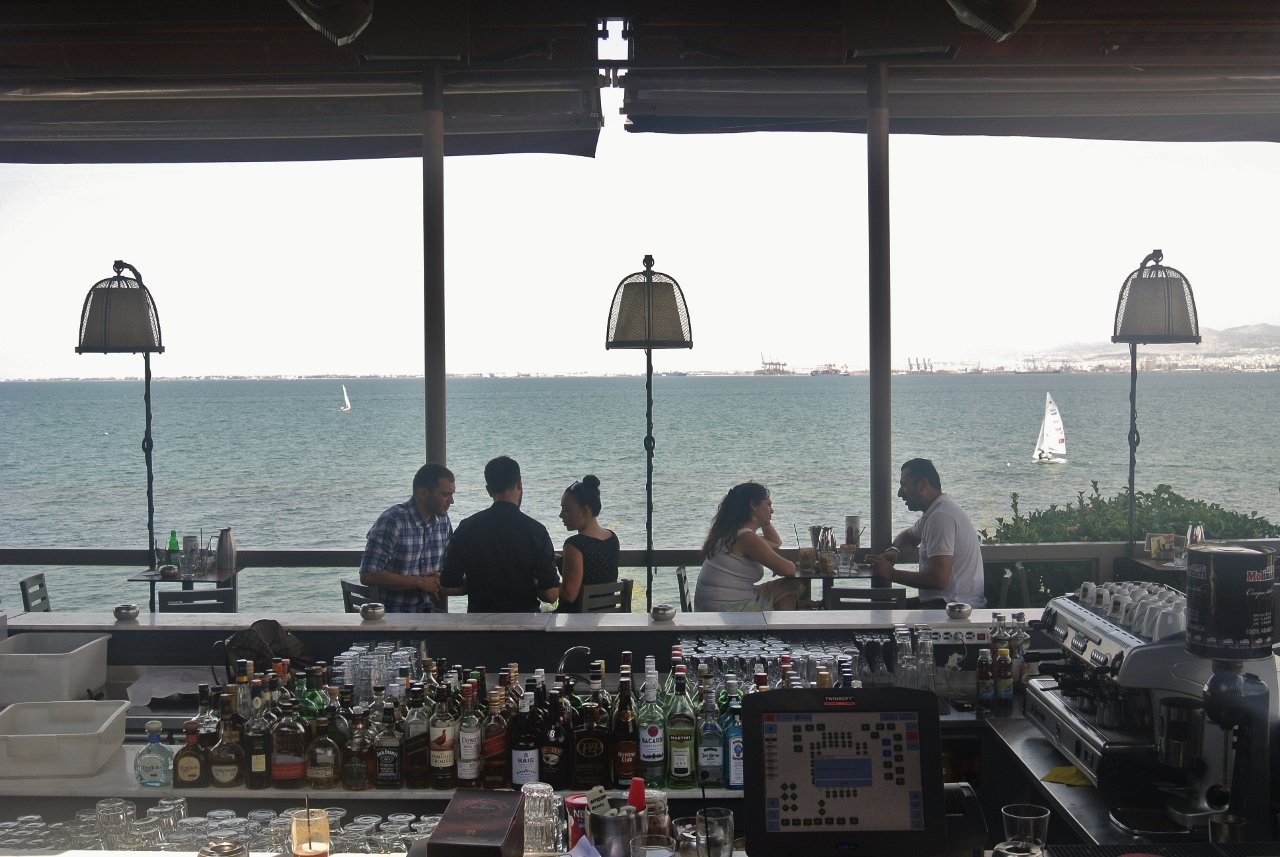 If a seaview is what you’re looking for while having your morning coffee, Les Zazous is the place to be. This restaurant/lounge/bar/cafe offers a modern dining experience with a sophisticated but very relaxed ambiance. 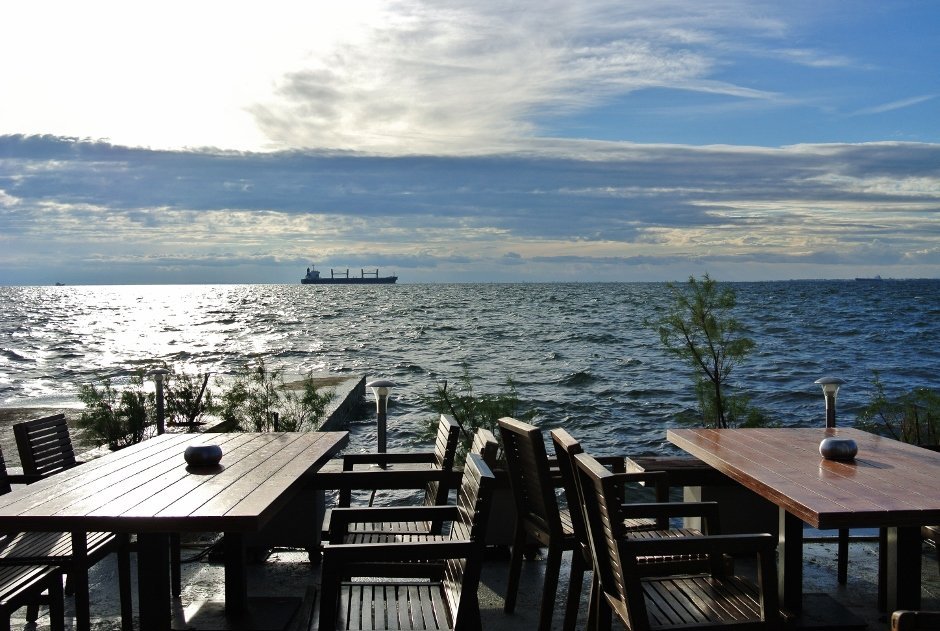 Located at Nea Paralia, Omilos offers a beautiful seaview as you enjoy your coffee or cocktails. 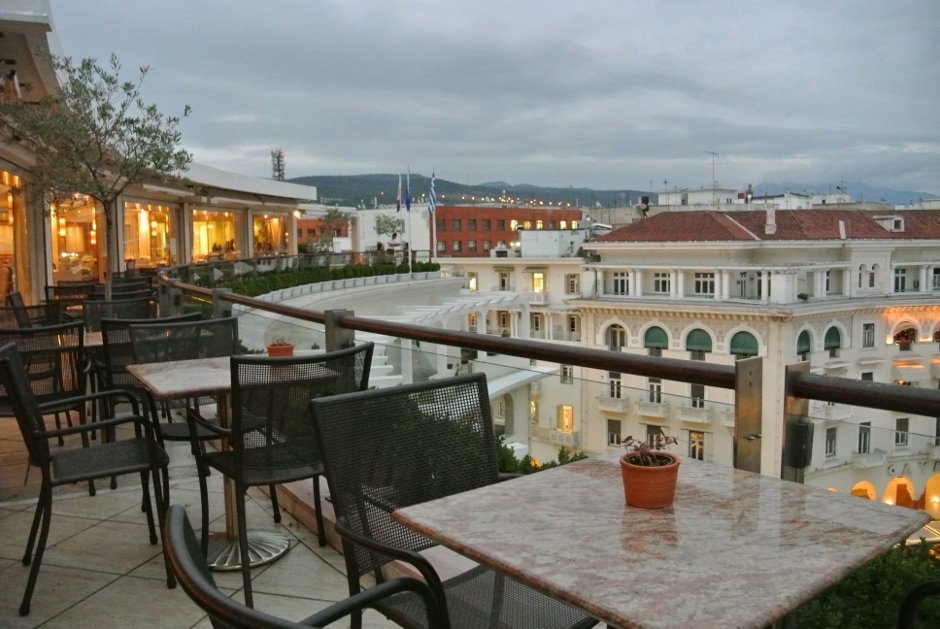 Set atop the Electra Palace Hotel, Orizontes Roof Garden offers an unbeatable view of Aristotelous Square down below. Perfect for afternoon coffees or a romantic dinner. 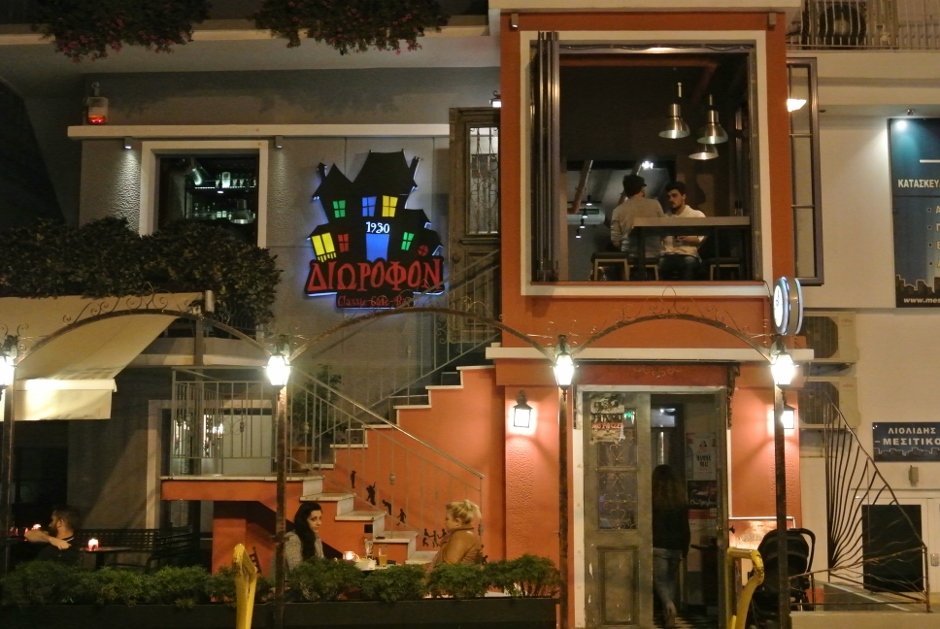 With a great atmosphere and music, To Diorofon is a favorite place to hangout by The Greek Mister and his friends. It is a 3-story cafe/bar which includes a rooftop seating. 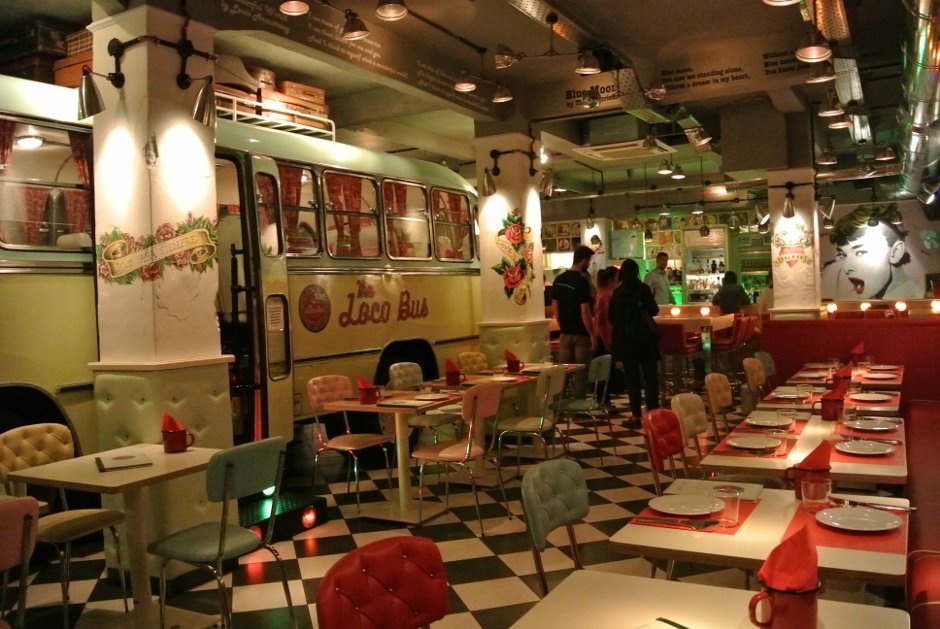 With a very vintage, 1950’s design and a hippie bus in the middle of the restaurant – The Loco Bus immediately became one of my favorite bars in Thessaloniki. Try their cucumber smash cocktail, refreshing! 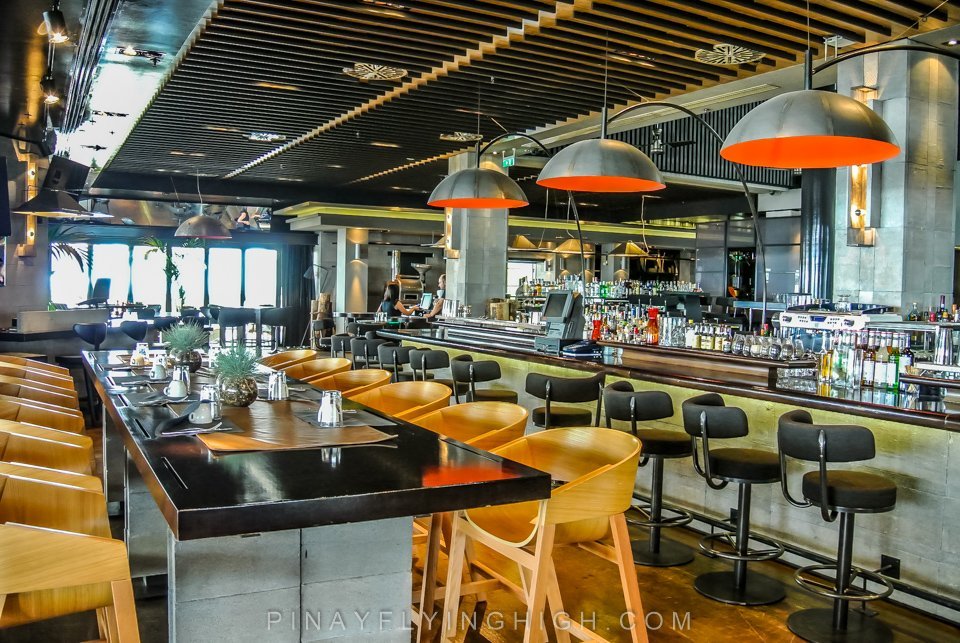 Away from the bustling city center of Thessaloniki is Boheme, an ultra-modern and sophisticated dining and drinks venue by the beach of Pylea. Be warned though, it gets seriously trendy at night (dress code kind).

DAY TOURS YOU CAN DO FROM THESSALONIKI 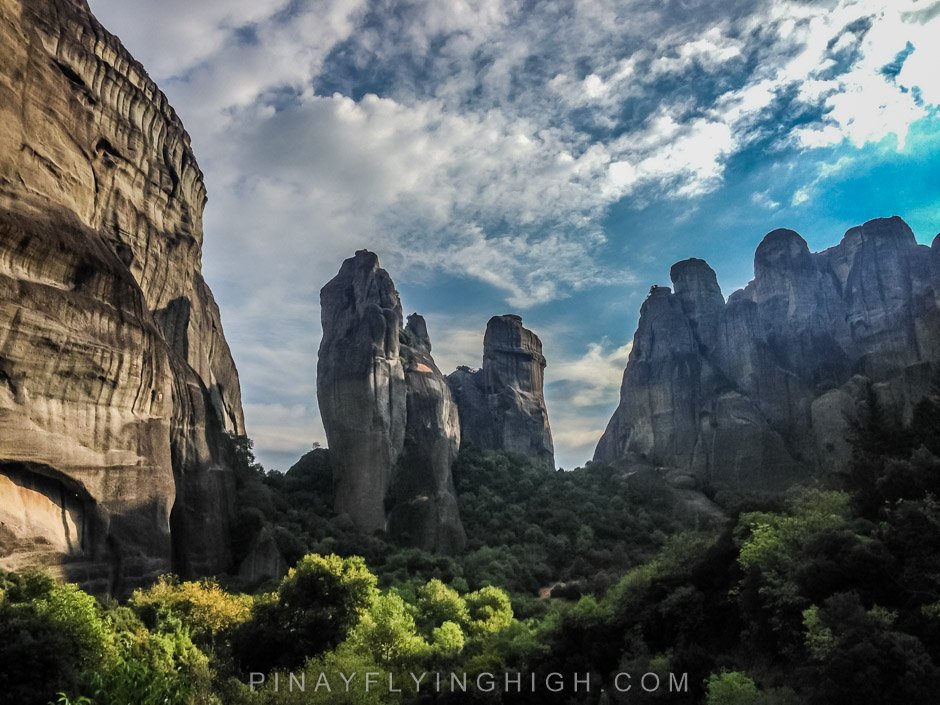 Meteora is one of the most beautiful places I’ve ever seen and should be in everybody’s bucket list. 14th-century monasteries built on top of the rocks, it will definitely leave anyone in awe and wonderment.

Travel back in time and see the King’s mausoleum and the famous museum with finds of the Tombs of King Philippos II, father of Alexander the Great. 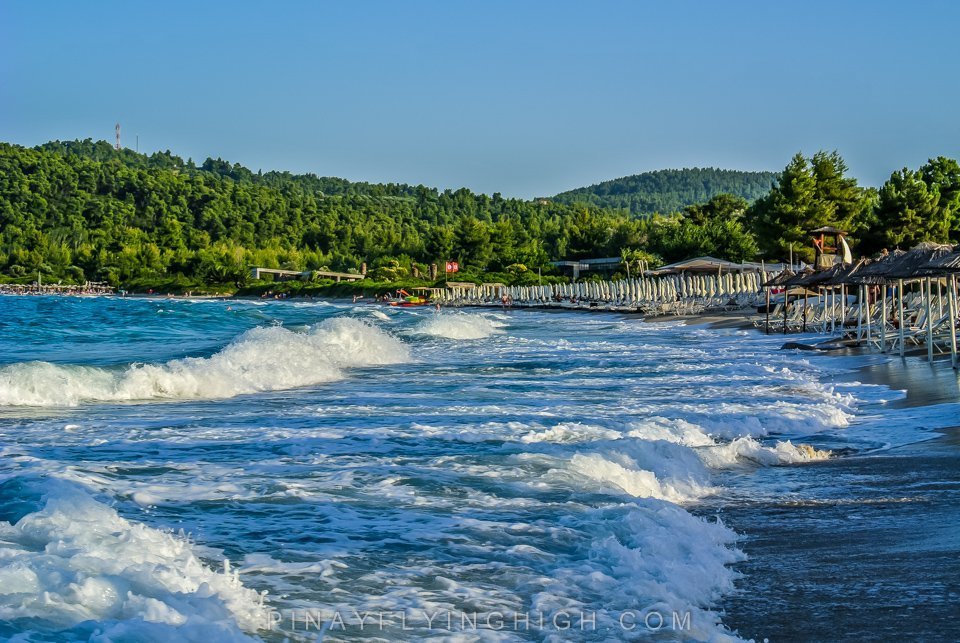 If a beach weekend getaway is what you’re looking for, Chalkidiki is your best bet from Thessaloniki. The pristine beach and turquoise colors of the sea will definitely take your stress away. 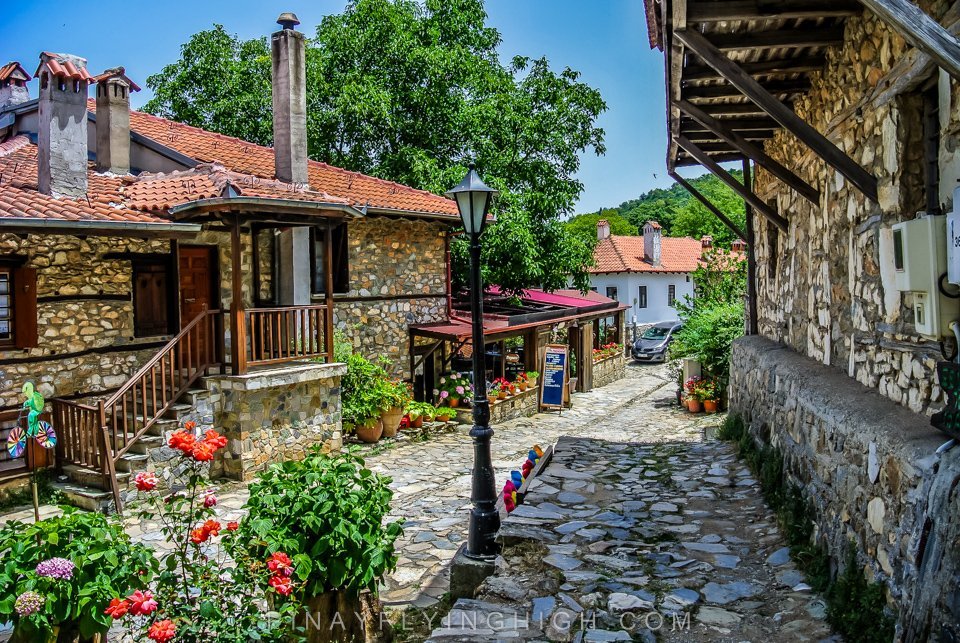 If you want to take a break from the bustling city life of Thessaloniki, head over to the mountain village of Palaios Panteleimonas and be transported back in time. Have a meal in one of the tavernas while being surrounded by stone houses and cobblestone streets.

Getting Around. Taxi is your best bet to go around Thessaloniki. They do have buses as well however, it might be hard for a tourist to use it specially if you’re not sure of the route of the bus. Walking around is also very feasible as it’s a very pedestrian-friendly city. It’s just not recommended though during summer. Renting a car is also a good idea however, bear in mind that parking is such a hassle in this city.

Crossing The Street. Forget about the traffic lights, here in Thessaloniki you really have to stop, look and listen. They do drive crazier than normal here and the traffic lights (specifically the yellow and red) are merely suggestions for them.

Learn The Basics. Greeks are very nationalistic and they do appreciate it if you at least try to greet them in their language. I’ve received discounts for coffee and souvenirs just because I tried to speak Greek so you never know what you’ll get if you do.

Sundays, Off Days. During Sundays, most of the shops are closed (except for the souvenir shops). So if you’re planning to do some shopping, make sure that you set a day for it before or after Sunday.

Time Difference. Greeks are generally laidback people, don’t be offended if someone shows up late as they won’t mind as well if you do the same. Lunch is at 2pm and dinner is at 9pm. Siesta time is between 4-6 so don’t call anyone between those times.

Mind Your Fives. Avoid raising your hands to someone with your palms and fingers open. This is a very offensive gesture called moutza, equivalent to giving them the middle finger. If you need to demonstrate the number 5 with your hand, do it with your palms facing you.

It’s A Chimney. Every single person I met in Greece are smokers and even if there’s a non-smoking sign in the restaurant or bar you’re in, they will find a way to be able to smoke. Just a bit of warning to the non-smokers out there.

Disclaimer: I am not an expert of Thessaloniki and I don’t claim to be. The above guide is based on my experiences during my numerous visits in this city. This is not a complete guide as I’ve only featured the ones that I have personally visited (specially for the tourist spots). There are much more things Thessaloniki has to offer and I’d be updating this post whenever I discover something new. 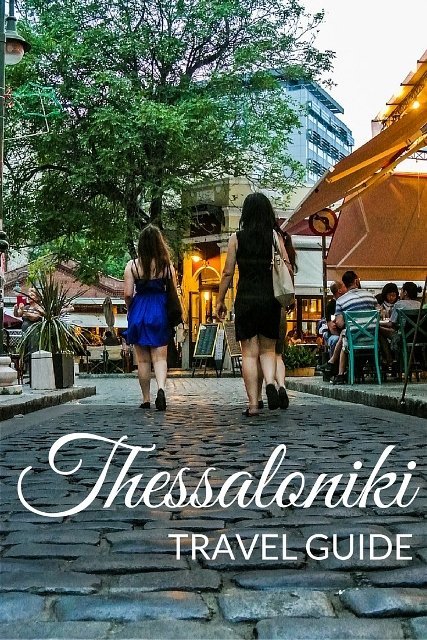 PrevPreviousThessaloniki, Greece | Ladadika, Where The Old Merges With The New.
NextSantorini, You’re Still As Breathtaking As You Were Five Years Ago.Next