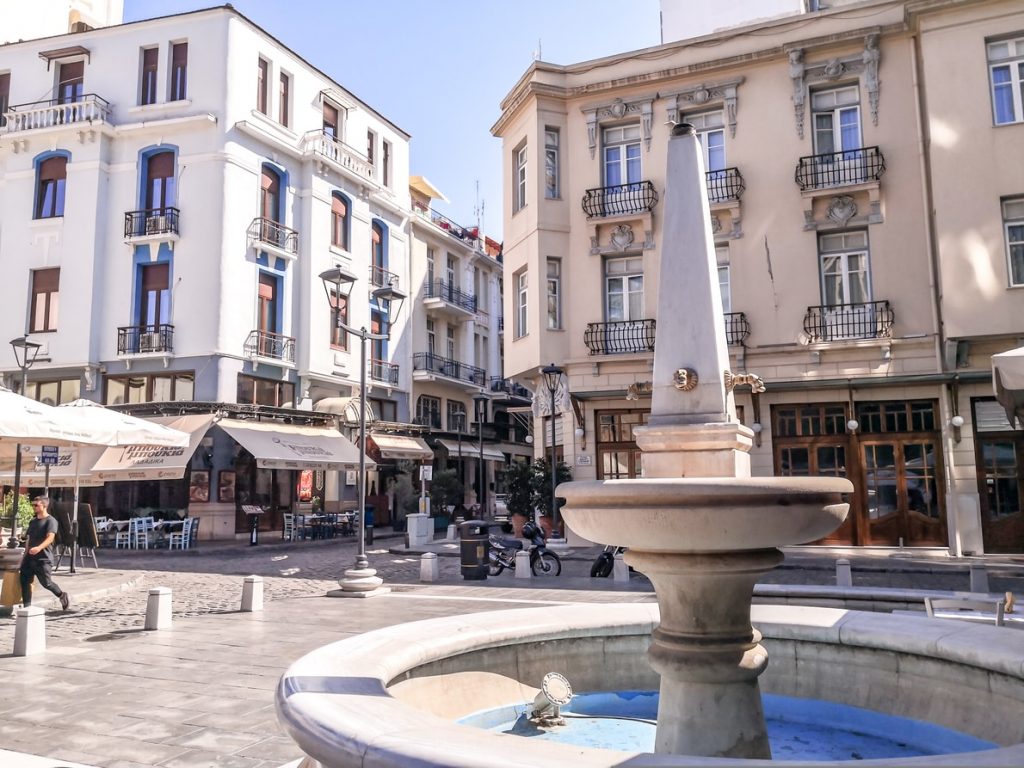 When does your holiday begin? For me, it’s when I have my suitcase out with the door of our apartment closed and locked behind me for a considerable amount of time. So when I checked in Premier Inn in Gatwick the day before my 6am flight, I was officially on a holiday – at least in my head. The early morning flight out the next day meant that instead of waking up at stupid hours in the morning, I can take my sweet time because the airport is literally just a walk away from the hotel that I was staying in. Even if technically I’m still in London soil – I’m basically on a holiday that night and already acting like a tourist. Lol.

I arrived in a sunny Thessaloniki Airport tarmac only to find out that the Immigration line starts OUTSIDE the airport itself. I’ve never seen Thessaloniki Airport so busy before, I used to just whizz pass it everytime but there was a long queue of British revellers all running away from the cold and wet UK to seek some glorious days of sunshine in Greece. Quite a weird time to be busy as it’s already September and as far as I know, there were no school holidays around about that time.

I only have five days to spend on this holiday (which I will later find out was too many), the last days of my annual leave for this year. I changed jobs in the middle of the year so I was given a pro-rated number of annual leave days by my new company. I thought spending it in Greece would be nice but I realized this time around how Thessaloniki-ed out I am now.

We visit every year and while the city is beautiful, I basically look forward to the days that I’ll be spending time with the Greek Mister’s friends. Ok, with the Greek family too but I’ve just seen them a couple of months ago and I’ve already had a dose of them for this year. Lol.

The Greek Mister’s friends are the absolute best and I’m not just saying it just because some of them reads my blog but it’s the reality. I’ve told the husband once that for all the times that I’ve been to Greece and met people who are directly or loosely connected to him, I’ve never met anyone who I didn’t like and that’s really saying a lot because I’m extremely picky when it comes to choosing people I’d like to hang out with or associate myself with. They’re good people and definitely some of my favourite people in the world.

During our last visit, I realized how the dynamics between them have changed and it’s nobody’s fault. Circumstances have changed as some of them now have children (or new girlfriends) and it’s now hard to get ahold of them altogether in one place. I basically spent most of the 5 days in Thessaloniki with the husband and as much as I enjoy his company – I was actually really looking forward to catching up with his friends.

So this scenario got me into thinking, is this how our lives are going to be like from hereon? Is this our punishment because we’re the couple who chose not to have children (for now or maybe never) – are we going to spend the rest of our lives now sitting at a bar waiting for a friend to show up who won’t be able to make it because they’ve got better things to do obviously with their children? And what is this I’m feeling? Am I… Am I actually feeling left out?

While wallowing in self-pity, I realized that I may just be shocked by it all. I was so used to the lifestyle of everyone not having responsibilities nor children each time I visited Thessaloniki the previous years that I didn’t realize how much it will change once the kids come into the picture. Don’t get me wrong, I wasn’t expecting them to leave their children at home and hang out with us. I just wasn’t used to it yet and I actually feel relieved that their lifestyles have changed otherwise, they’re just shit parents. Lol.

And because of the fact that we didn’t do much during our short visit, I started noticing some problematic aspects of Thessaloniki. Has traffic always been that bad? Has driving gone worst since I visited the last time? (We saw three major accidents in one day and by major I mean, upside down cars). I started picking on things that I don’t like about Thessaloniki only because I was bored and I’m afraid that if I continue on doing this, I’d start hating it which I don’t want to happen.

Maybe I’ll just cut my Thessaloniki visits shorter so I won’t get burnt out. But most importantly, I think I’ll have to face the reality that we’re the odd couple in the group who decided not to have children. Which has its own upside – I’ll be known by these very children as the doting friend of their parents who gives them gifts everytime we visit. I can enjoy the company of these kids and still be able to go back to a quiet and peaceful home afterwards or have the option to run away from them when they start annoying me. Lol.

So yeah, we’re the odd couple – maybe just for now or maybe forever. Who knows? We might change our minds in the future. 🙂

Note: Photos in this rambling post were all taken in Thessaloniki, if you want to read more about this city – click on this link. 🙂