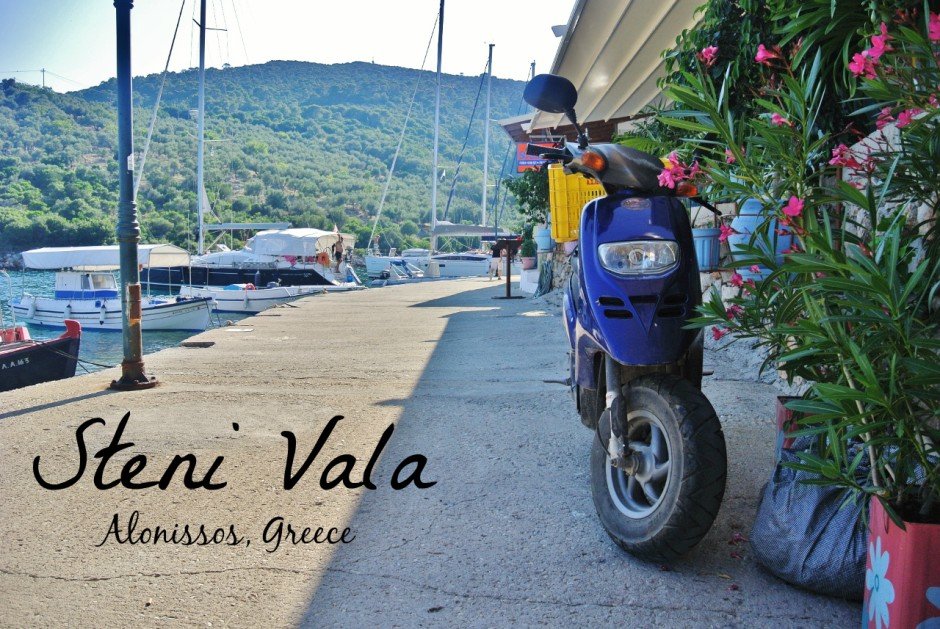 For a place to be considered visually stimulating – it doesn’t need to be packed with modern skyscrapers nor does it need to be glamorous or extravagant. That is the case at least for me. The real stimuli lays on the beauty emanating from a place’s simplicity which is mostly weaved by the works of nature forming a beautiful scenery like that of an artist creating a masterpiece – such is the case in the charming village of Steni Vala in Alonissos. After spending the afternoon in Leftos Gialos, we went to Steni Vala with one thing in mind – to dine at the most famous restaurant in Alonissos called Tassia’s Cooking. Little did we know that the area where the restaurant is located is actually going to impart more memories on us than the restaurant itself. Located at the North Eastern part of the capital Patitiri, Steni Vala is a small fishing village. There were quite a few tavernas and some small family-run accommodations in the area, a sign that it is slowly becoming to be another tourist hub in Alonissos. I walked at the very end of the small harbor, the simplicity of life was evident. It was quiet and peaceful, a number of boats docked along the small corniche bobs up and down over the clear waters of Steni Vala. A small range of hill with lush green trees stands just a couple of meters from the harbor, adding to the already captivating imagery of the whole place. I was hooked! I think I have taken about a hundred photos just from this place alone. More photos were taken as I walked back towards Tassia’s Cooking Restaurant which is located at the very entrance of Steni Vala. The restaurant was huge, I wasn’t expecting such a size in this area. We ordered some appetizers, mostly seafood to start our dinner. I wasn’t aware though that it was just an appetizer since the family ordered quite a lot which looks to me as though it’s enough for us all to be the main course of our dinner. As we were finishing our appetizers though, The Greek Mister’s uncle started to feel sick which at some point became quite serious so some of us had to drive him to the hospital. It was an unfortunate way to end a rather beautiful day but we’re just relieved that it wasn’t as serious as we all thought it was. His recovery took some time though which made him miss the remaining days of our holiday.

Apart from that, I believe the whole family would agree that it was still a marvelous day added to our holiday. Thessaloniki, Greece | Ladadika, Where The Old Merges With The New.

Travel Guide and Video | Discovering The Beauty of Pelion, Greece