How To Survive The Songkran Festival At Grand Hyatt Doha 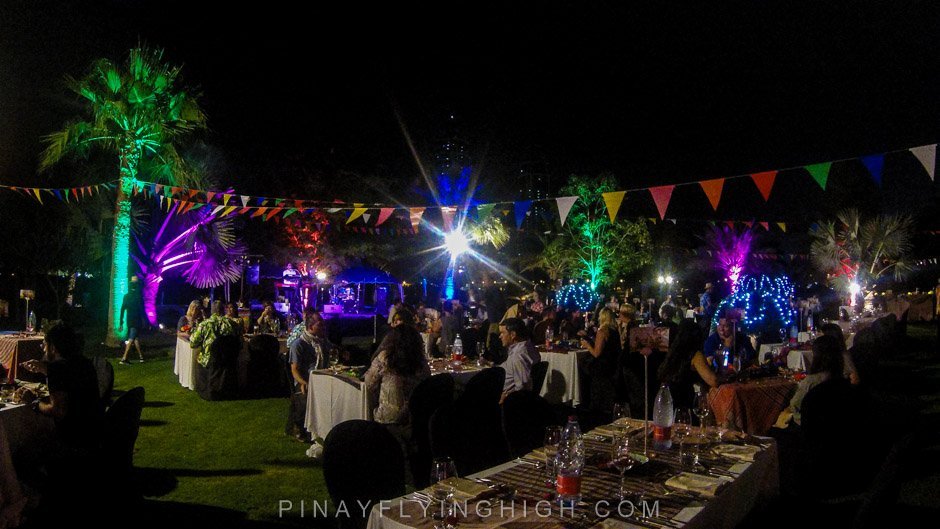 We celebrated the Songkran Festival at Grand Hyatt Doha last night. Yes, the famous and the most sought-after Thai new year was celebrated here in Doha. Don’t you just love living in a multicultural city? You get to have the best of all the corners of the world.

Songkran Festival is the new year celebration of Thailand celebrated every April 13-15. As an ex-travel agent, I know these dates very well as we’ve had massive headaches booking a flight and hotel accommodations going to Thailand around these dates. If you’re planning to witness the real Songkran Festival, you MUST make your reservations at least 6 months in advance just to be sure. It’s a massive holiday celebrated nationwide so it doesn’t really matter which airport in Thailand you choose – it will be busy!

Traditionally, water is poured on Buddha statues around Thailand during this time of the year to symbolize purification, washing away of sins and bad luck. However, I think at some point someone miscalculated the pouring of water and accidentally poured it on to someone else and so the festive celebration began.

In the streets of Thailand, expect to get wet! Soaking wet! It’s a fun and massive wet street party in the whole country and thankfully, we need not travel all the way there because Grand Hyatt Doha brought it for us here. We were invited to witness the first of the 2-day Songkran festivities in Grand Hyatt Doha last night and I realized my preparations weren’t enough for what transpired. So I’m giving you tips and tricks right here to survive this celebration. 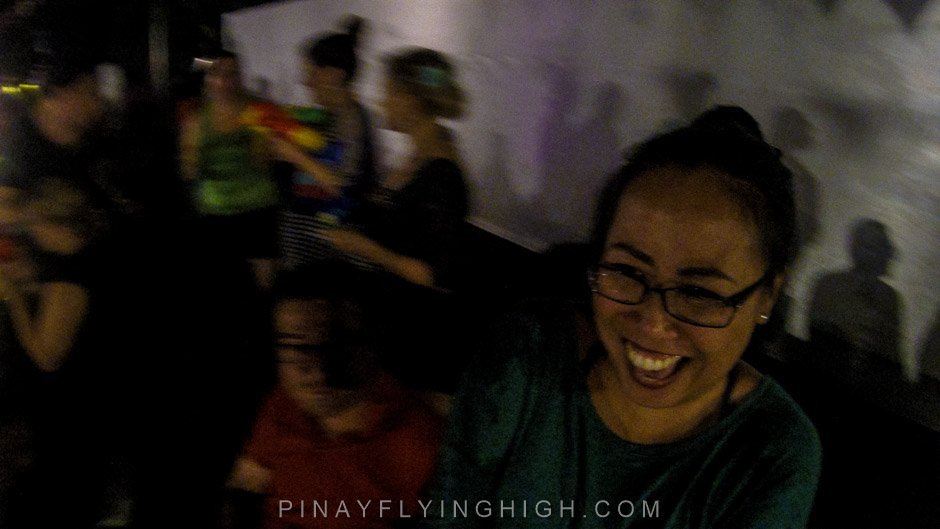 Beachwear is highly advisable. Flip flops is a must too. And for the love of all things that matter to you, DO NOT WEAR non-waterproof make up. You’ll get wet oh trust me you will.

At the entrance of the Songkran Festival venue, you will be handed small water guns which I realized later on were all pieces of sh*t! It won’t help you against people with AK-47 water guns which they brought with them and can shoot water as far as 4 feet away nor will it help you when people are throwing buckets of water at you. I’d say, bring your own pail (the biggest one you can find) or better yet, hire a fire truck. That’s the only way to ensure your safety. I’d also advise you to bring an umbrella and wear a raincoat. 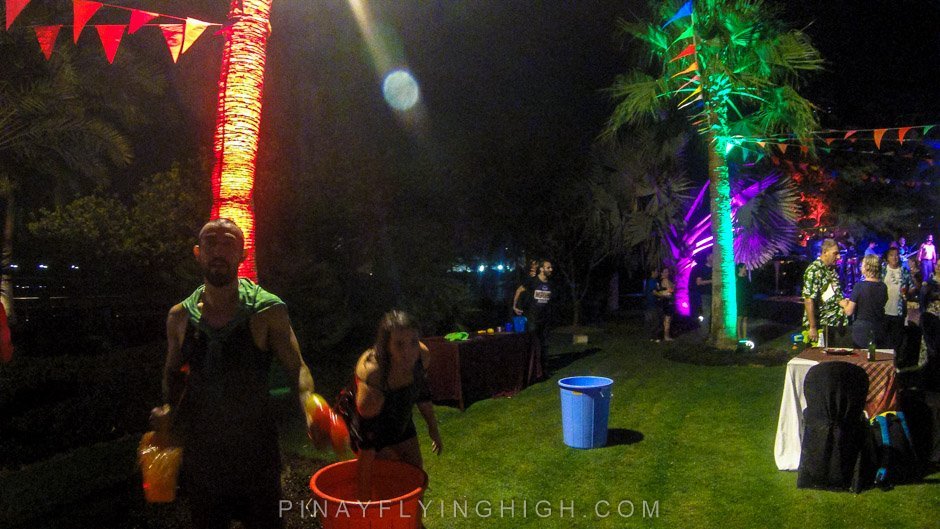 2 seconds after this photo was shot, this guy poured that pail of water on me. I will seek revenge!

You’ll need some people to back you up in times of war so bring everyone you can find with you. People come here in big groups and you wouldn’t want to be outnumbered by them. The bigger your group, the better. 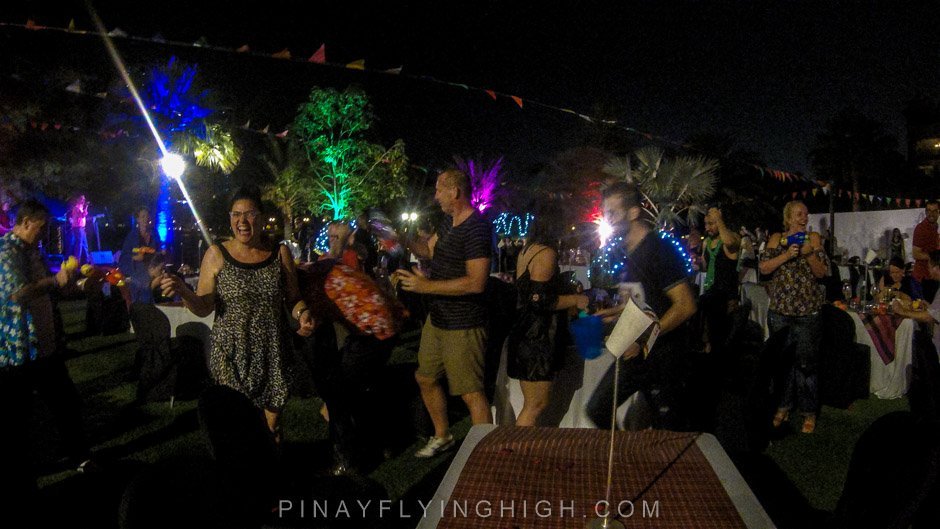 That group is ruthless! Stay away from them if you see them again.

People attending this Songkran festival are all heartless and ruthless. Eating is not an excuse to not get wet. You’ll feel water being sprayed at you while you’re just about to eat that forkful of pad thai. Food served were all great so you wouldn’t want to miss any of it. Be there early and eat as much as you can because you wouldn’t want to be caught in the middle of a water fight while you’re eating. Unless you’ll bring an umbrella to protect you from all of it. 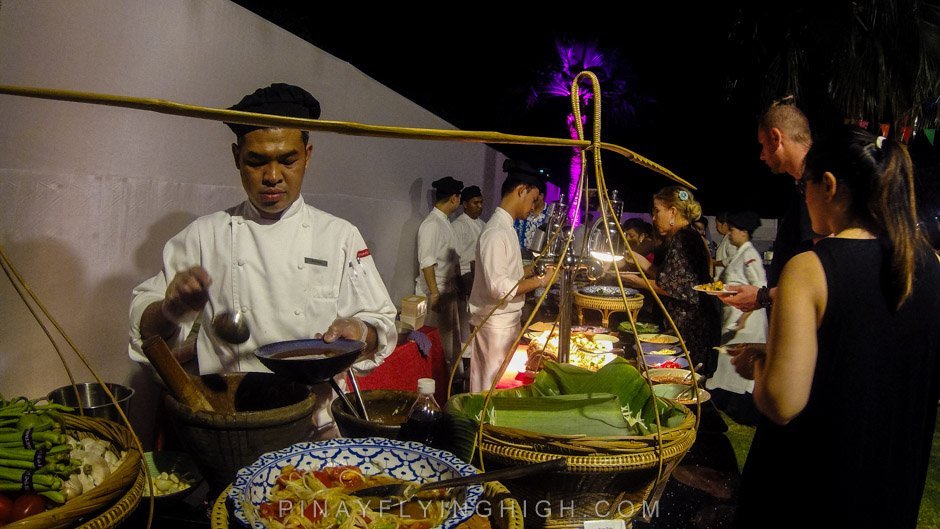 That time when everyone’s still dry.

Just like eating, having your phone with you is not an excuse to not get wet. As I said, ruthless people are in this festival.

The scarier the better. 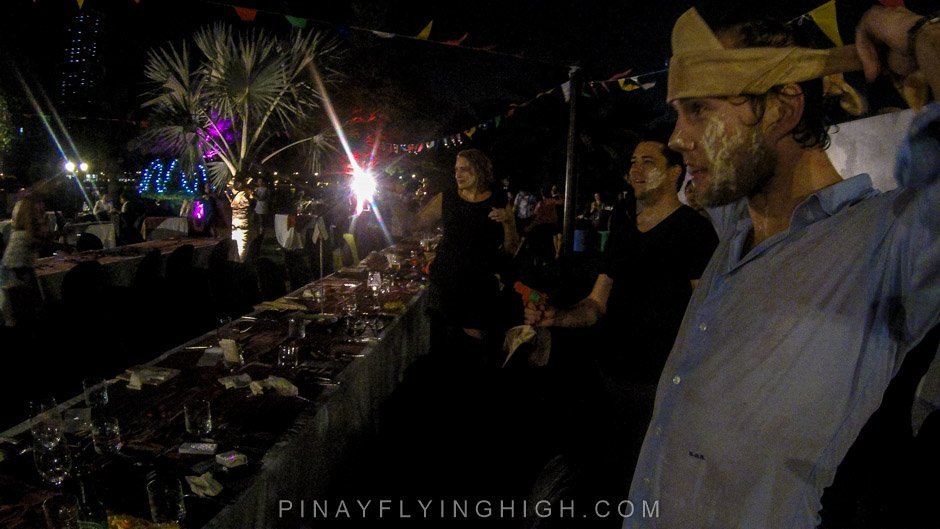 Rambo himself is on our side, I feel safer now!

The staff of Grand Hyatt Doha are all armed too so whatever you do, do not approach any of them in hopes of protection because they won’t protect you. In fact, they have bigger water guns than anybody else and would use it without hesitation.

When people are soaking wet, shooting them with your water gun anywhere else other than the face is useless. Getting shot in the face is annoying though, aim for the face.

My own husband shot me. My friend poured cold water over me. The group I was with cornered me and used me as a target practice. You’re on your own. Trust nobody. 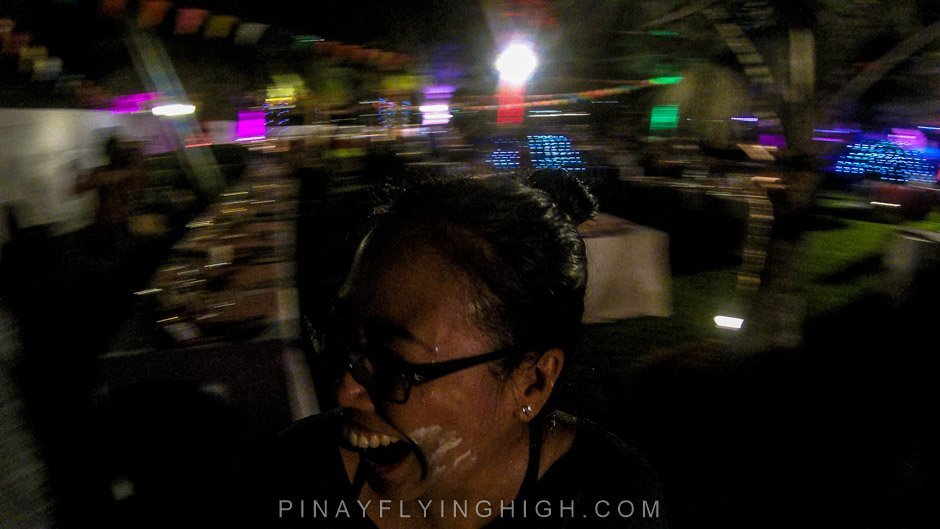 You will never ever be able to find a safe place because no matter where you are, they will look for you, they will find you and they will shoot you with their water guns. They’re all kinda like Liam Neeson like that.

You will never ever get out of that place dry anyway so just enjoy getting wet and try as much as you can to get somebody else wet.

My husband doesn’t really like staying up late when he’s working the next day so in the middle of the water fight of the Songkran festival, I told him “Let me know when you want to go home” and his reply to me was “uhmmmmm never?” Yes, it was that fun and we both agreed that it’s the most enjoyable event we’ve ever been to so far.

Songkran Festival at Grand Hyatt Doha is a 2-day event. On the 15th of April, a Friday brunch with Songkran theme is waiting for you. I’m telling you now, that that is THE place to be this Friday. Book your tables right away. You’ll thank me after.

Note: I was a guest of Grand Hyatt Doha during the Songkran Festival however as always, photos are my own and opinion stated are genuine and in no way influenced. 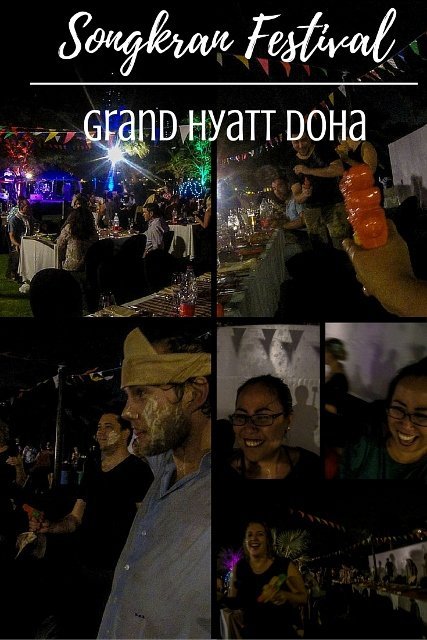 PrevPreviousHakkatini Nights at Hakkasan Doha, A Fad or Here To Stay?
NextDoha, Qatar | Sabai Thai Is The Thai Restaurant Doha Is Waiting For.Next