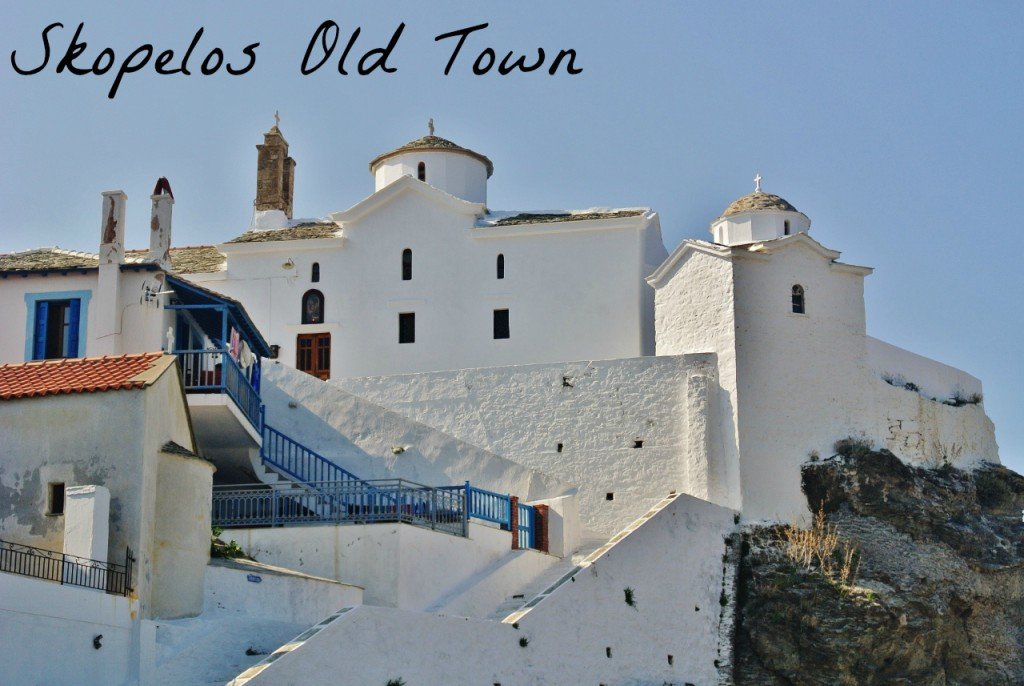 Close your eyes and think of Greece, what do you see? The Acropolis in Athens? The pristine Greek beaches? Gyros? If you ask me, when I hear or think of Greece my mind immediately thinks of the whitewashed houses with blue rooftops like what you would see in Santorini which for me, is the most beautiful and the most popular island in Greece. A lot of people are mistaken though that you can only see these white and blue combination in Santorini or Mykonos or any other Cyclades islands when in fact, it is actually all over in Greece including Skopelos which was our next destination for this Greek holiday. 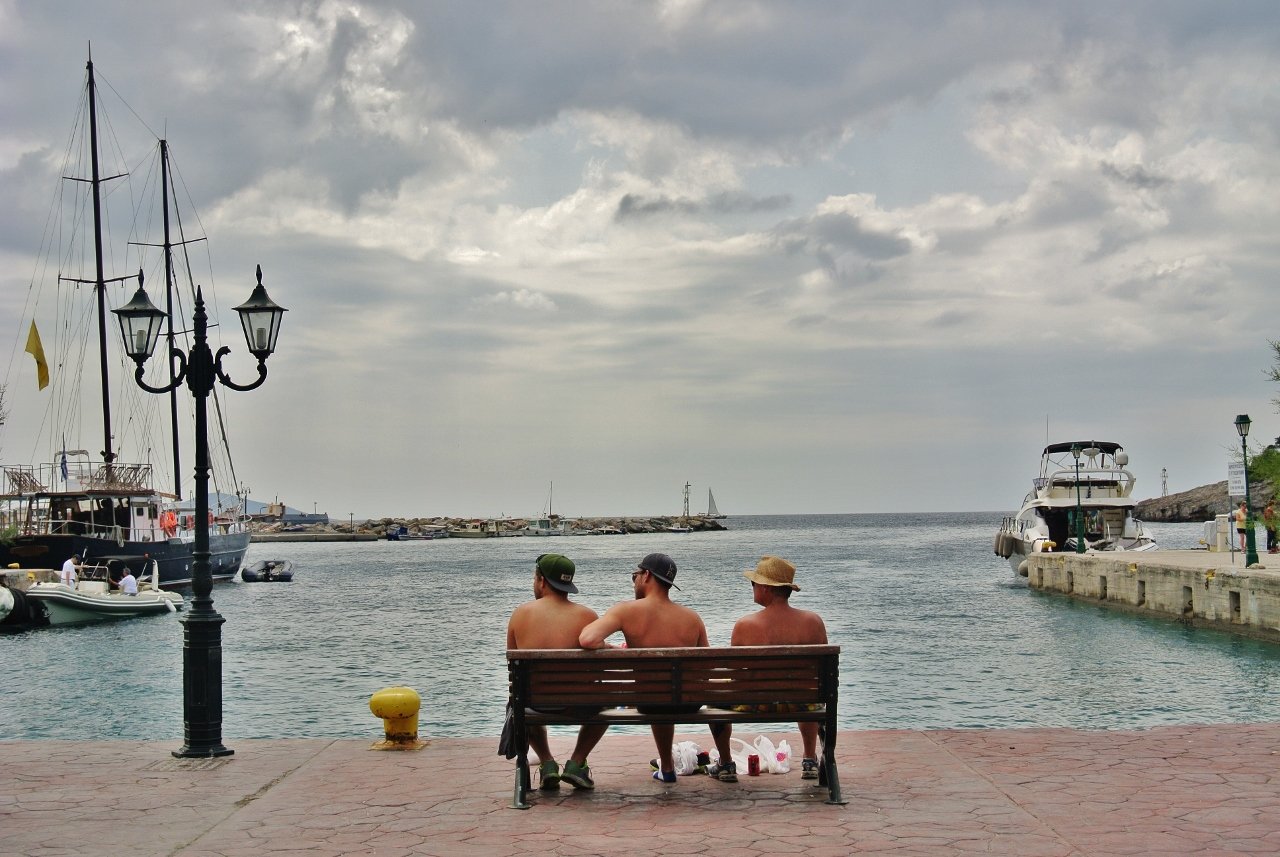 As they say, some good things never last and so after a wonderful week I spent with the Greek family in Alonissos – we had to bid farewell to them as we continue on our Greek holiday to another Sporades island – Skopelos. My brother-in-law and his wife joined us for this leg of the trip – it was a last-minute decision for them before they head back to the UK to continue on their holiday. The ferry ride from Alonissos to Skopelos was only 30 minutes and as soon as we arrived in the island, we dropped our bags in our hotel and we went straight to Skopelos town to wait for The Greek Mister’s friend who was also going to join us for this trip. The more the merrier as they say which stands true to this holiday of ours. As soon as we were all reunited and reacquainted, we set off to explore the labyrinth of Skopelos Town. The hues of white and blue in the town reminded me of the very first time I was in Greece, when I visited Santorini. Good memories! 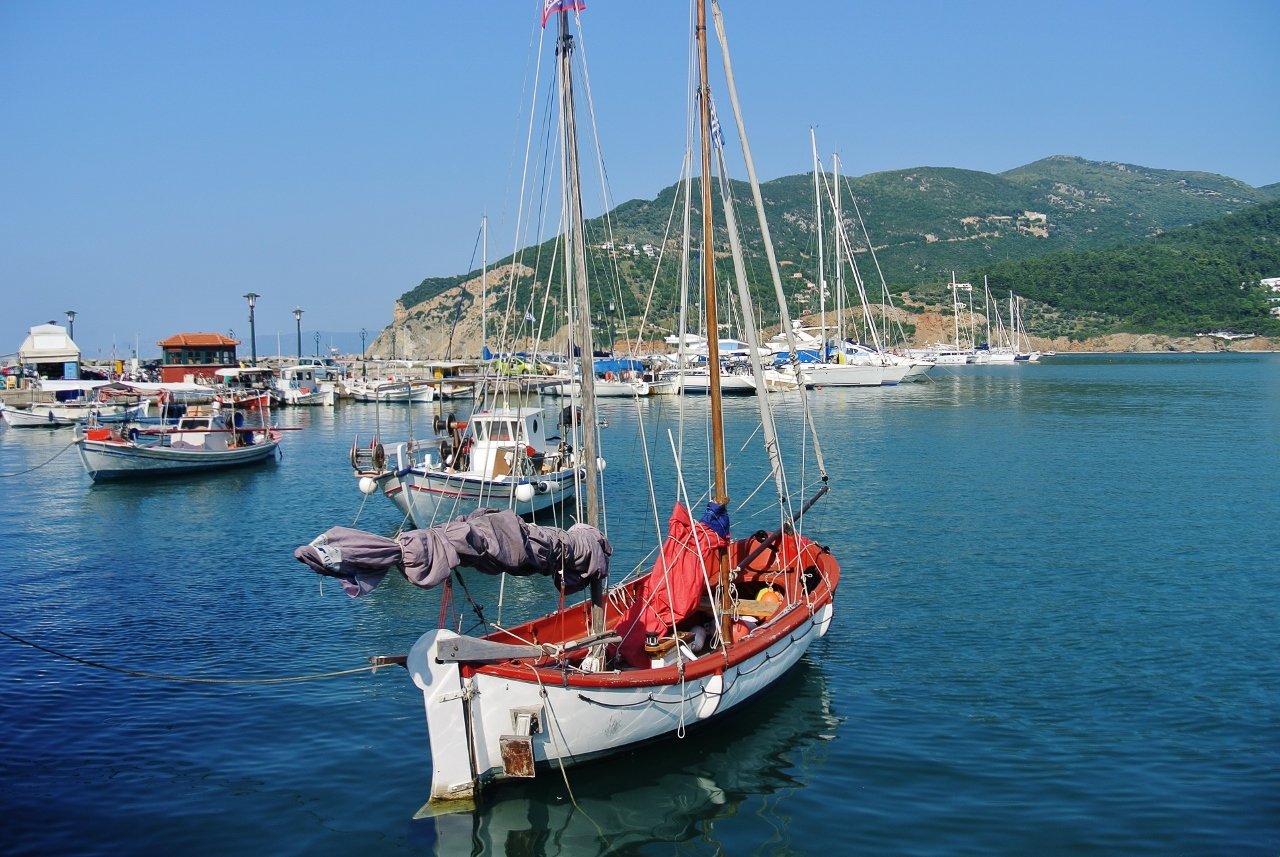 Why White and Blue?

I have been fascinated by Greece for many many years. I have always been drawn to look at the pretty pictures of Santorini whenever I see one in various travel magazines that I encounter. It’s funny though because all those times that I have been admiring its beauty on print, I have never told myself that one day I’ll go to Greece. If someone told me then that I will someday see the beauty of Greece with my very own eyes I would’ve thought that that person is crazy and does not have a full grasp of reality. It was a farfetched hope for a small town Filipina girl like me. At that time I thought, there was no way I will ever set foot in Greece so better be realistic and be contented by admiring it through photos. And yet, here I am now writing about my third visit to Greece and on top of that, I am married to a Greek! Who would’ve thought? Definitely not me! 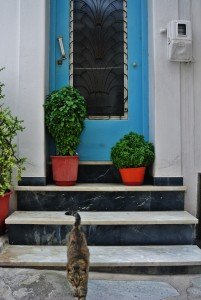 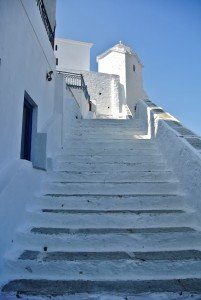 Back in those days when I was but a mere admirer of Greece from afar, I have seen a documentary about it – most specifically about why the white and blue colors are very popular in this place. But because I have a memory like that of a goldfish, I have forgotten all about it. The only thing I remember though was that it has to do something with Greece’s climate. 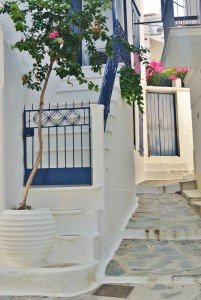 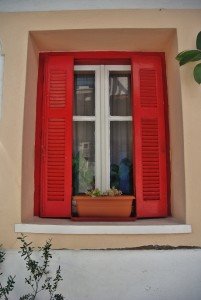 Not a lot of people know that, not even The Greek Mister. “To represent the Greek flag.” is what he told me when I asked him about it over breakfast one day in Skopelos. That is actually somehow true but it was just a mere coincidence. Yes, I did my own research. 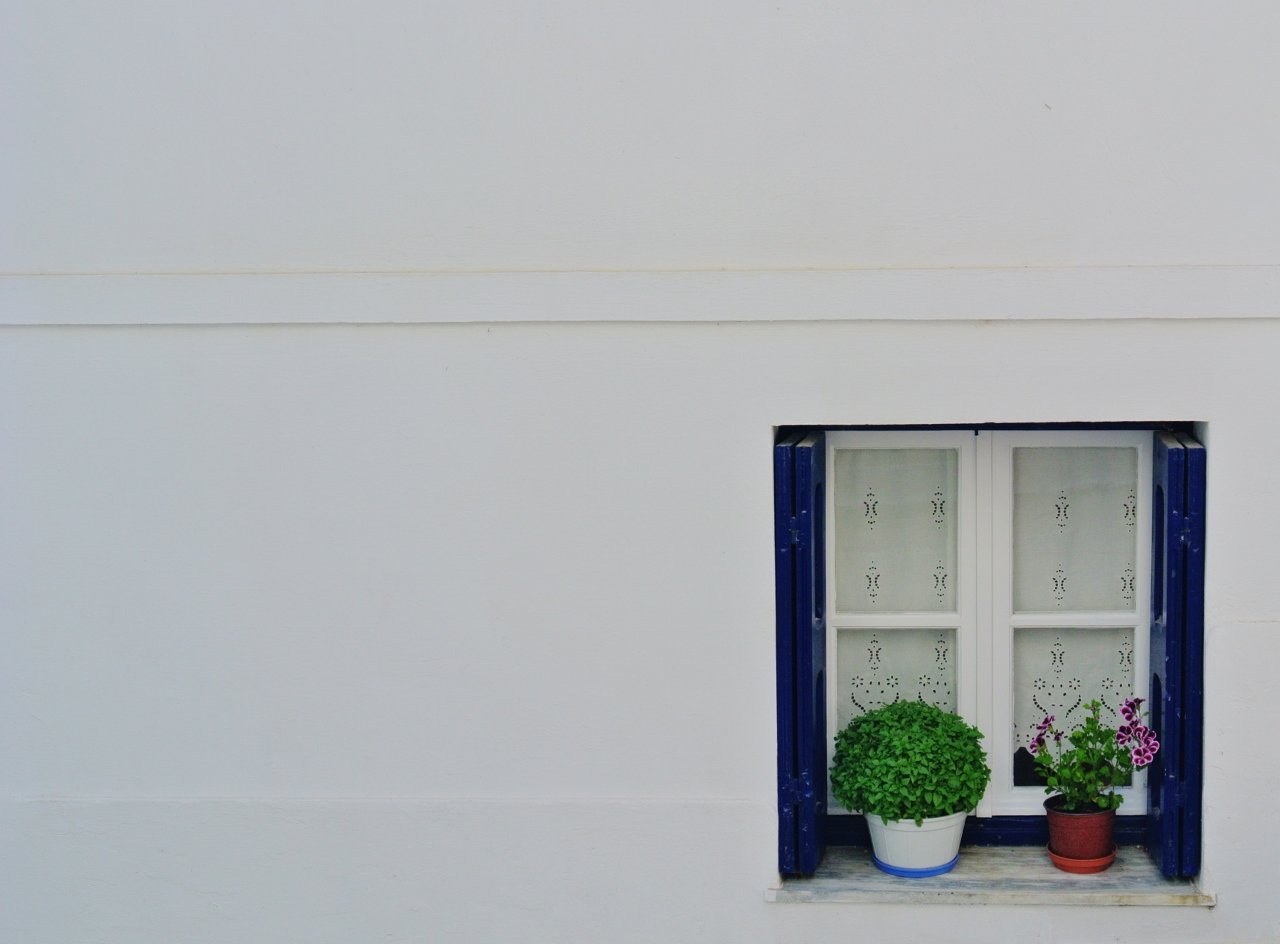 Most of the buildings on the islands were made of volcanic stone due mainly because they didn’t have enough wood available to build houses. The color of these stones absorbed the heat which means it becomes an instant oven inside the house during summer. In this case, they have painted the outside walls of their buildings white to reflect the harsh sunlight – to make it a little more heat resistant. 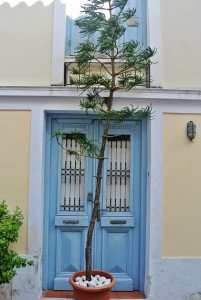 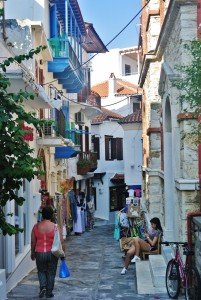 The blue-colored roofs came from a blue tinted cleaning agent called “loulaki” which was used for washing clothes and a very cheap alternative to buying real paints. When these tablets are dropped into the mixture of limestone plaster, a blue-colored solution is the result. The whitewashing of the houses is done at least three times a year so this very cheap and readily available blue-colored solution is the most economical way for most of them so the buildings won’t be all-white which is quite hurtful to the eyes. 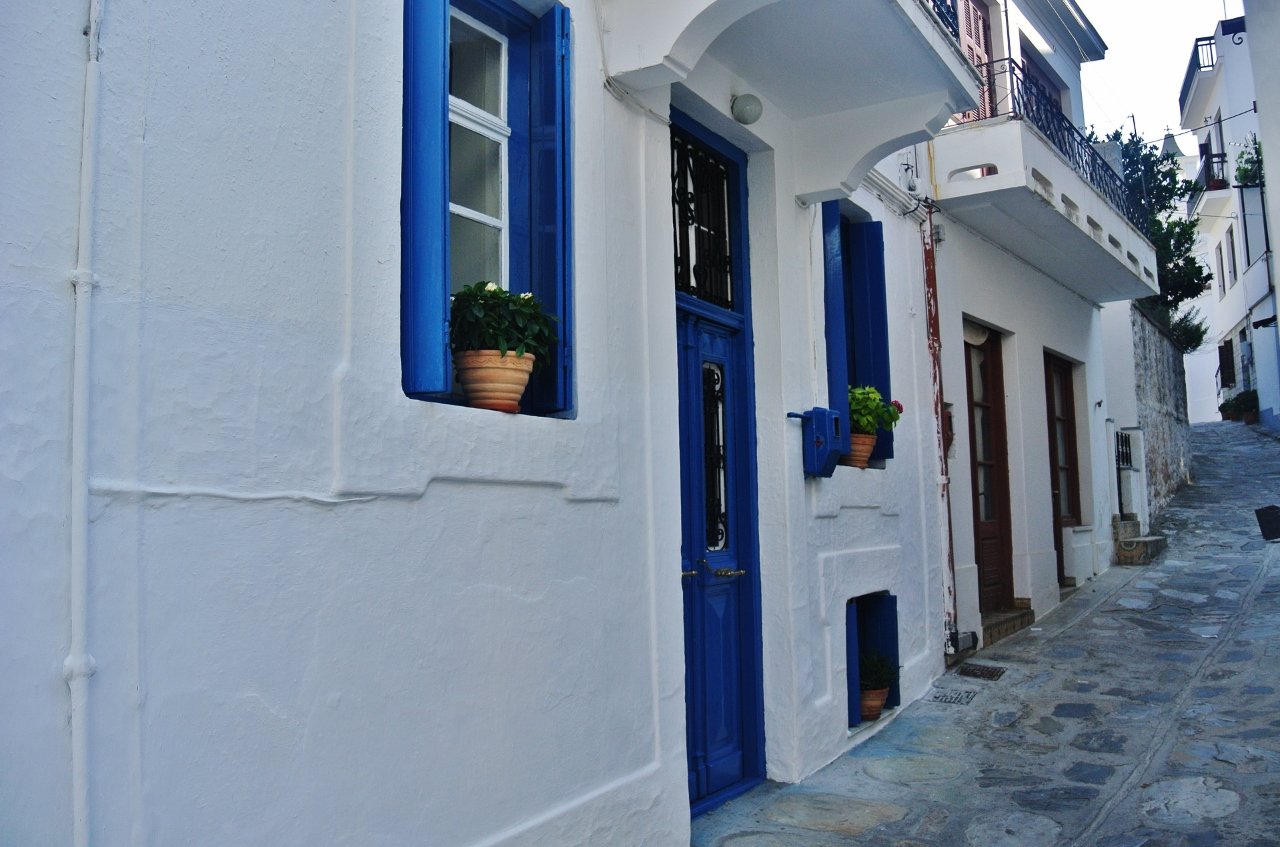 It wasn’t during the military governance in Greece in 1967 that the white and blue combination became mandatory for all the buildings since it signifies a unified government and full support of people towards their political agenda. It was during the late ’70’s though when the Greek government realized that this color combination attracted tourists and brought tourism money to their country. It was this time when they finally made it a law that all houses must be painted white and blue. So there’s your little information and history as to why Greek buildings and houses in most islands are painted white and blue. 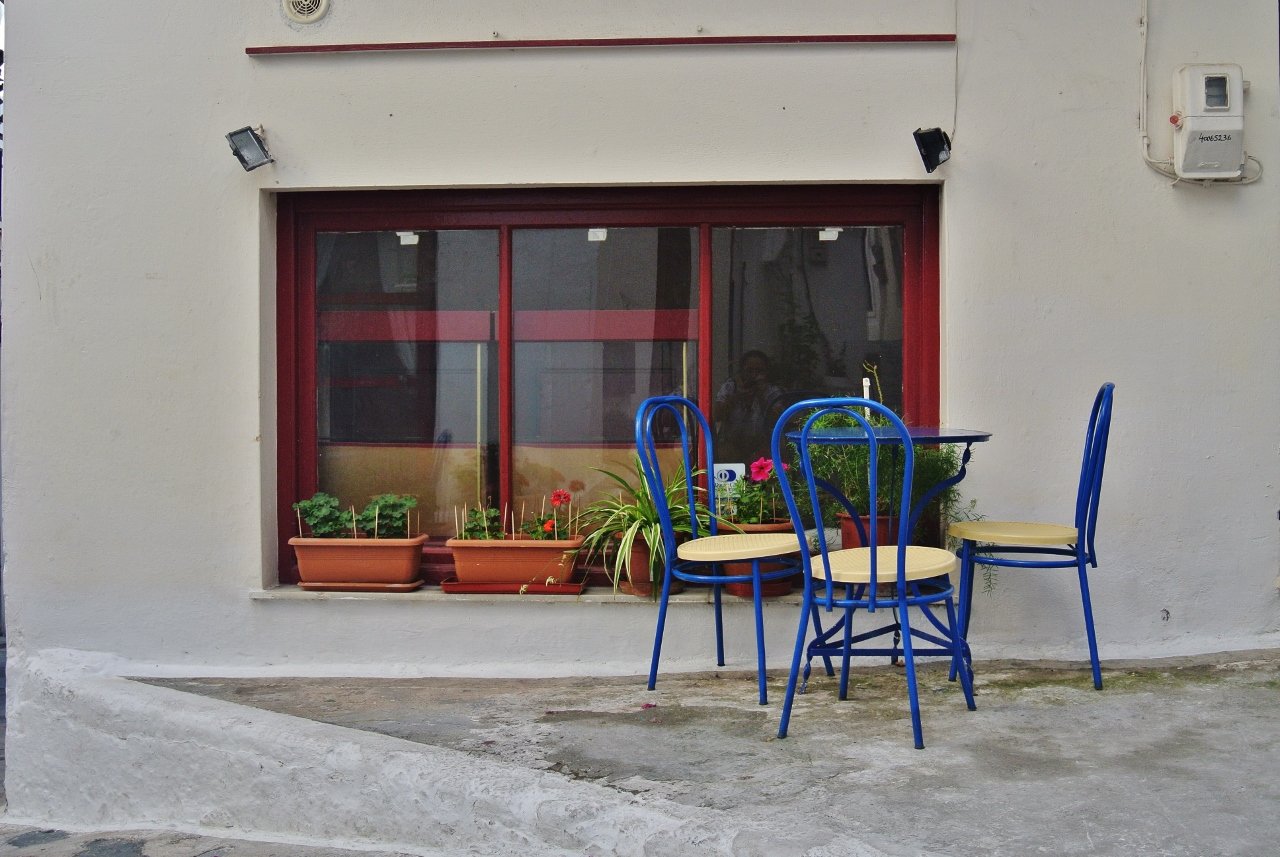 It’s very pleasing to the eyes I must say, while all of the walls are whitewashed – some buildings have splashed this wall canvas with some other pastel colors. The plants and flowers which are abundant in the area makes it even more beautiful. It’s very easy to get lost in the small alleys of Skopelos Town but frankly, I wouldn’t mind getting lost here.

A few hundred photos later taken around Skopelos Town, we decided to sit at a taverna somewhere around the area and have a beer. We found a taverna in a small square surrounded by trees – it looked very inviting for our tired feet so we decided to stay there to have a beer or 5. 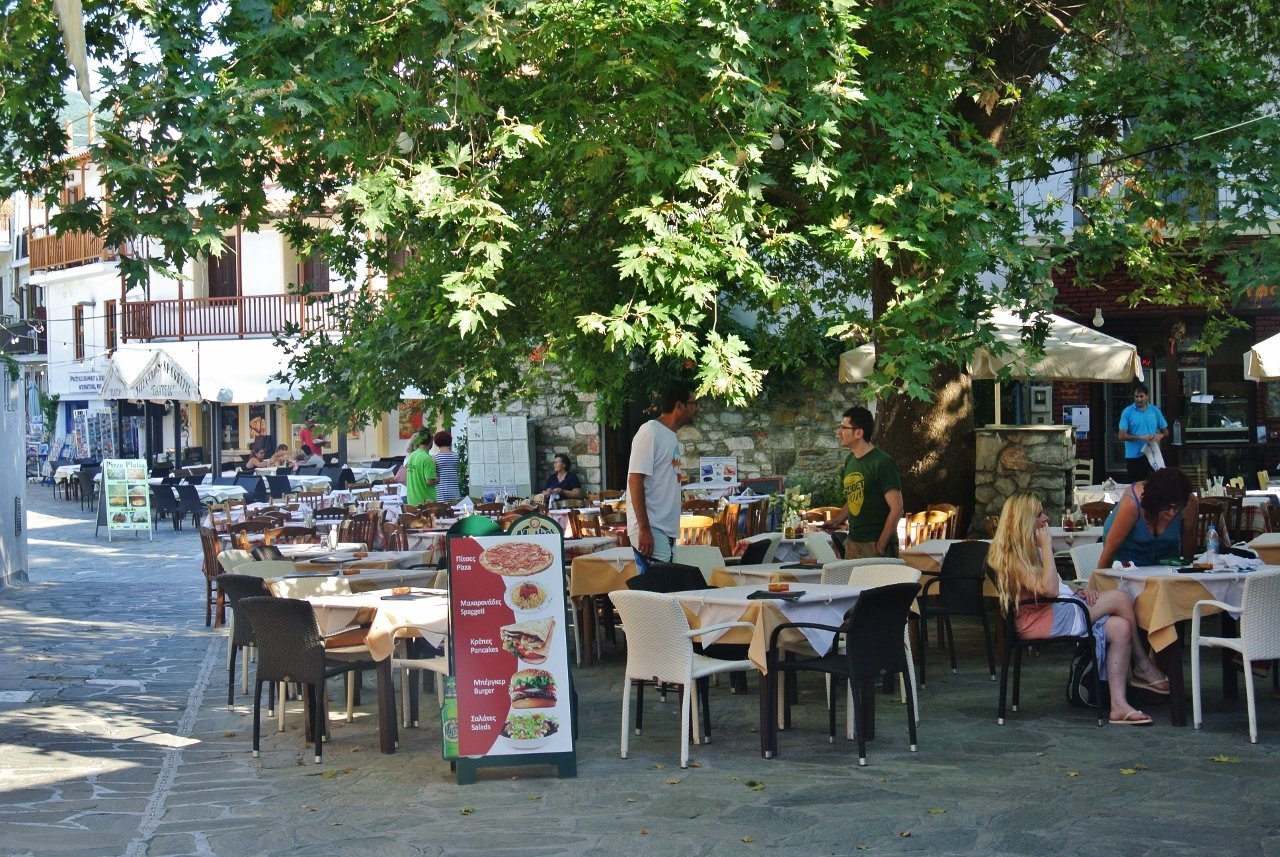 After the much-needed break, we walked towards the beach near Skopelos Town to look for a restaurant which has been regarded as one of the best on Tripadvisor only to find a very tourist-driven place with exorbitant prices which made all the Greeks in the group walk out from it. Us girls just followed along and took more photos. 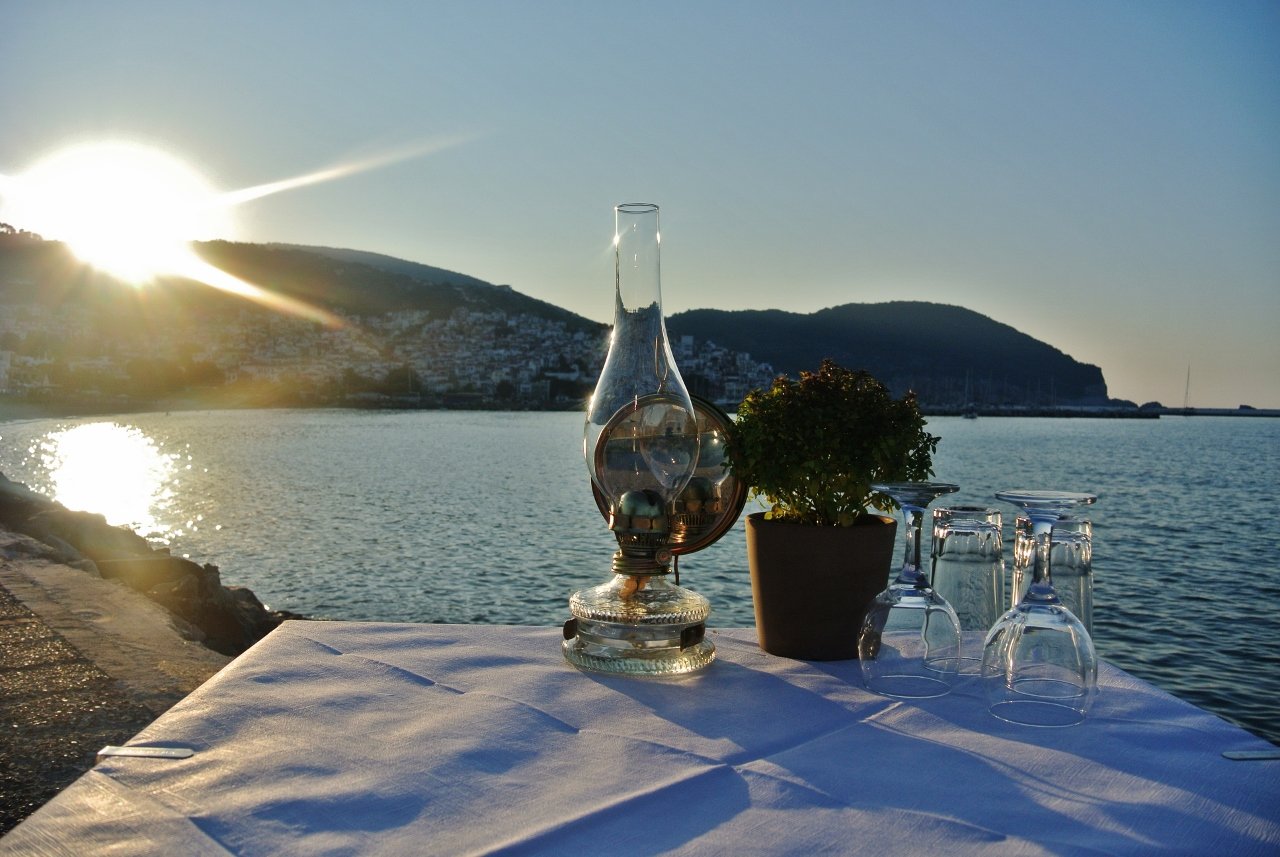 The brother-in-law called the owner of the hotel we’re staying at to ask for an advice as to where we can get great food with normal prices in Skopelos. He advised us to go to Agnontas which is what I’m going to talk about on my next Greek holiday post. 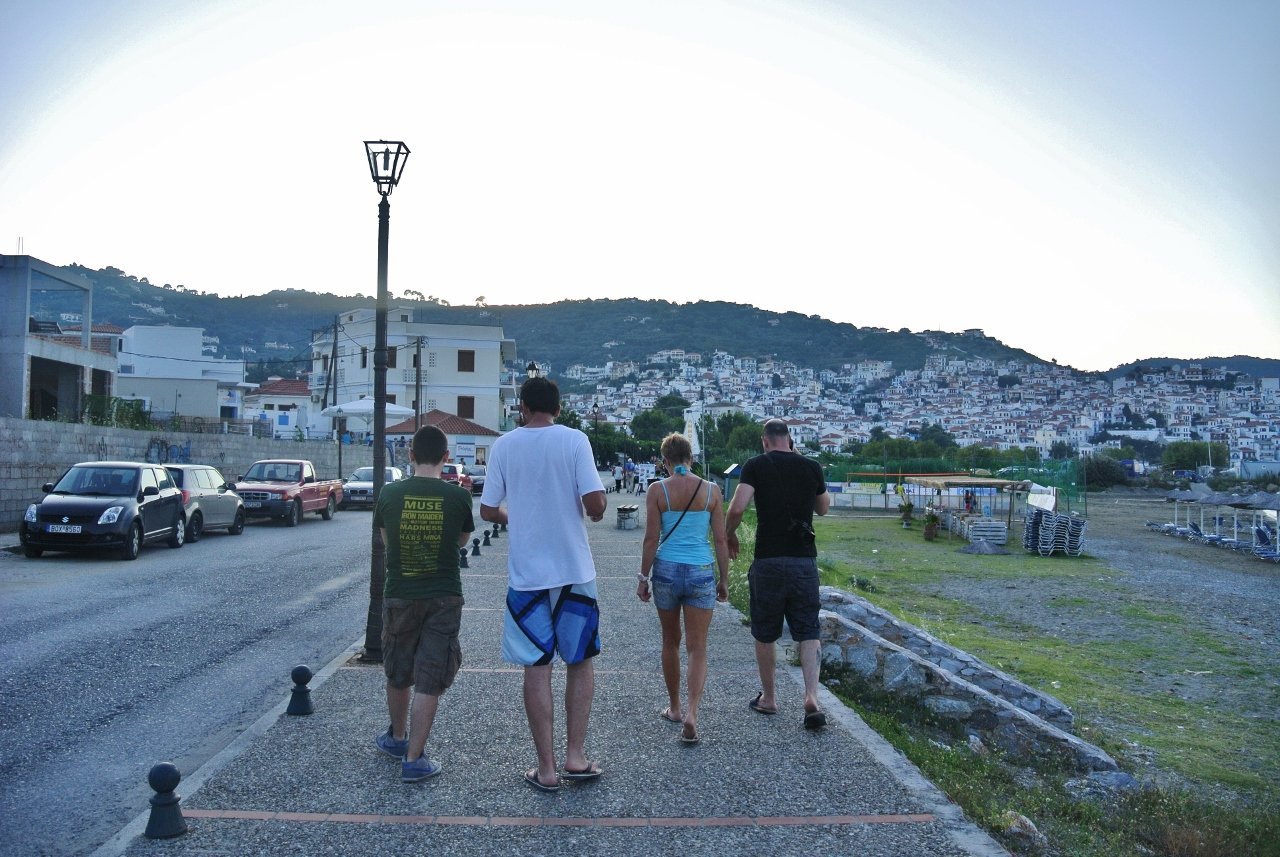 Not bad for a first day in Skopelos, yes?