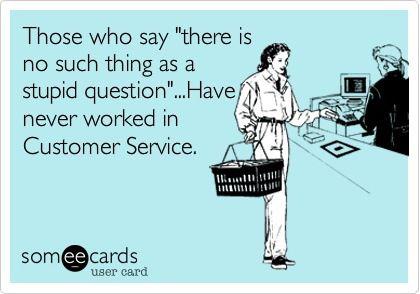 I’ve been working in the travel industry for 9 years now (holy crap! I’m that old???) and I must say that as much as I love my job, there are times when I just want to hit my head with a keyboard and walk away from some of the passengers that I have dealt with. They might have asked for a really impossible request or probably maybe just plainly stupid, I don’t know. In the course of those 9 years, I learned how to seek the comedic value of each and every stupid circumstances that I face as a travel agent. I have written some of those experiences on the blog and someone gave me the idea to compile everything in one blog post for my own (and probably yours too) amusement.

Here are what tops my list from all those 9 years that I’ve been working in the travel industry:

The longest airport transfer, ever.

PAX: I’d just take the flight to New York instead of Los Angeles.
TA: but you’re going to Los Angeles and not NEw York, right?
PAX: Yeah, but the flight is cheaper to New York. Can you just arrange an airport transfer from New York airport to my hotel in Los Angeles?
TA: * silence…. realized that the passenger is serious, typed something on the keyboard and showed the passenger this map:

TA: We can do this transfer definitely, you will arrive in Los Angeles in about 3 days at the least. If there’s no traffic and if you’re not going to have any stops. You will have to drive the car though as there will be nobody in their right mind who will do this transfer for you.

PAX: Do I need a visa to go to the UK?
TA: Yeah and unfortunately, you no longer have enough time to process it if you want to leave this weekend.
PAX: Can’t you do something about it?
TA: Uhmmm like what?
PAX: I don’t know, send a message so that we can just get the visa upon arrival?
TA: Why yes definitely, let me call the queen of England for you.

PAX: Can you make sure that there will be no sun rays on the side of our plane???
TA: * holds back laughter *

PAX: Can I have a stopover on the way back?
TA: Yes you can, the ticket allows two stopovers. One for each way.
PAX: But will I have a problem with the visa?
TA: What do you mean?
PAX: Visa to (insert name of the city where the passenger is from here)
TA: You’re holding a (insert the passenger’s country here) passport right?
PAX: Yes
TA: So you’re asking me if you will have a problem during your stopover because you don’t have a visa to enter your own country?
PAX: Yes!

The ahead of his time.
PAX: how many hours is the flight?
TA: 16 hours
PAX: even if I take business class?

The racist.
TA: Sorry sir but the flight is fully booked, will you be able to travel the day after? On a different airline?
PAX: But I’m holding a (insert first world country passport here)
TA: Sir, as far as I know, the seats inside the plane are not racist. If it’s full, it’s full for everyone regardless of the passport they hold.

The Mr. Suave
TA: May I ask what passport you’re holding so I can update your profile on the system?
PAX: (insert another first world country here)…. Impressive huh?
TA: Excuuuuuuuseeeeeee me????
PAX: nevermind

not my experience but this sure is funny as hell!

Those are just some of the experiences I’ve had that I can think of right now. I’ll update the post if I ever remember anything else or if something new happens (which is not at all impossible). 🙂

What about you? Do you work in the service industry? Any weird/funny stories to tell? Share it with us on the comment section below. 🙂

PrevPreviousDubai: A Legendary Friday Brunch at Legends in Dubai Creek Golf and Yacht Club
NextThings To Do in Dubai: Get On That BBQ DonutNext