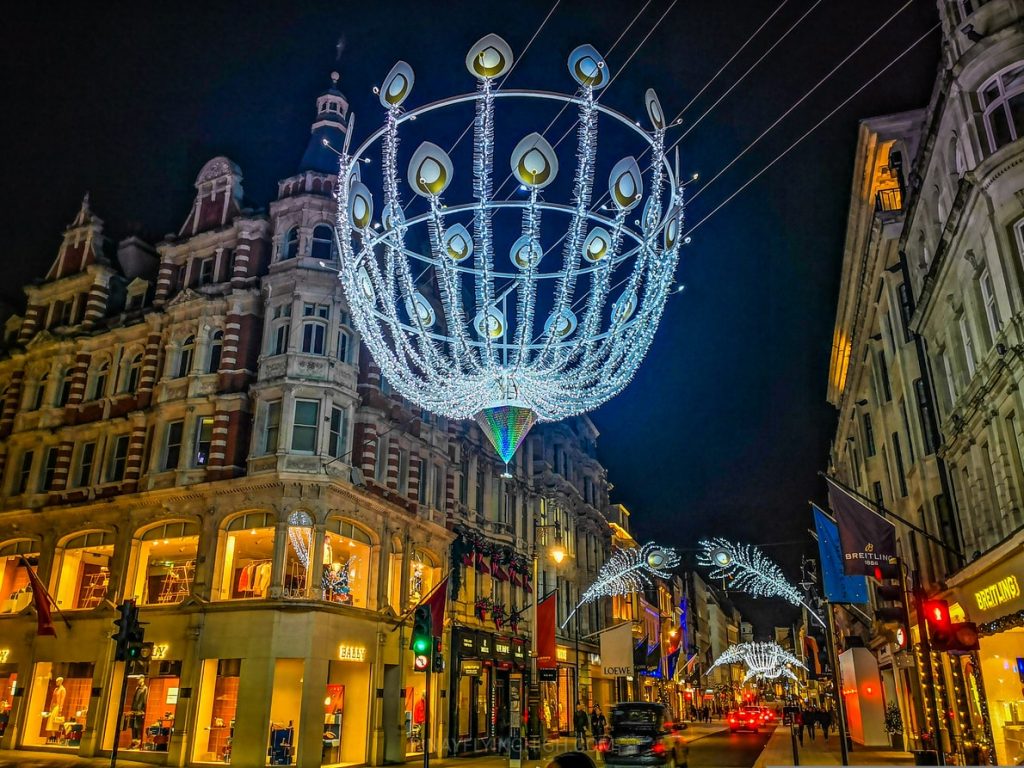 Continuing on with our self-guided Christmas walking tour around London, I present the second part of this series. I was joined by C during this walk, she’s a newbie in London who moved here just three months ago from the Philippines. She contacted me through my Facebook page , we chatted for a bit and somehow I sensed that I’ll get along with her well. I wasn’t wrong because I enjoyed showing her around the city with all its festive glamour. I love playing tour guide in London specially during the Christmas season because I understand that feeling of being in awe as you gaze on the beautiful decorations around the city for the first time, I still feel that even if it’s my fourth Christmas here.

We met at Koox to fuel up before our walk. Koox invited me to try out their dishes and seeing their menu online, I was curious right away. We had chicken mushroom kone while C had salmon tandoori box. Both were delish and good enough to give us energy for this walk.

Our first stop was St Christopher’s Place, a charming pedestrianized enclave of shops and restaurants. It was one of the first areas I’ve seen in London when I moved here and somehow, I end up passing through it whenever I’m in the area.

We then passed by Claridge’s which looks so festive with the seven Christmas trees on top of the main entrance.

Hush Mayfair and Mews of Mayfair were our next stop. Both already look pretty any time of the year but it’s extra gorgeous during Christmastime. I love how you can have al fresco dining and drinks here even in the middle of winter, it looks so cozy and charming! Makes you want to grab a seat and order some baileys-based drink, as long as you have a reservation of course because these beauties are always very busy.

Bond Street was our next stop, they’ve had the same decorations for the past four years but it’s still looking very pretty in my eyes. The peacock theme still hasn’t lost its spell on me.

We passed by Regent Street afterwards, again they’ve had the same decoration since four years ago but it’s still looking extremely festive for me. Also, I can’t picture Regent Street anymore without these angels during Christmastime.

Carnaby Street was our next stop and it’s also the one that I’m always looking forward to every year (which probably would be the same for all Londoners). They always have a theme which changes every year. This year’s theme is Project Zero, the decorations were made out of recycled plastic which I think is both amazing and stunning! Whoever was assigned to design Carnaby Street has done a very good job, better than the usual.

We passed by Burlington Arcade which is another place in London that somehow magnetizes my feet whenever I’m in the area. It is one of Britain’s first shopping arcades with small exclusive shops, many with their original signage until today. One of the most fascinating things about it is the fact that whistling and singing is banned in this arcade. The story behind it makes absolute sense but it’s just really interesting that they kept that rule until today. Find out why it’s banned here.

Cartier building was our next stop and it’s jawdropping! The elaborate decor does make it look like the biggest and fanciest gift one can ever get this Christmas. I’ve seen it repeatedly on my instagram feed even before I visited it and it’s just mesmerizing! This is also where C had her first photo with the red phone box since arriving here in London.

We passed by the beautiful Victorian building of the Royal Arcade, the stucco facade is inviting enough for you to explore it but the festive decoration of the arcade itself makes it even more prettier.

That was our last stop before heading to Mamasons in Chinatown, it’s a Filipino icecream parlor and the only reason why I’ve been wanting to go there was to satisfy my ube (purple yam) cravings. I had ube bilog, ube icecream in a hot bread – I only had two bites before realizing that it was too sweet for me. Lol. I forced myself to eat half of it which gave me goosebumps because it was too sweet. Well, now I know that ube icecream is no longer my kind of thing.

That’s the end of the second part of my self-guided Christmas walking tour around London. If you enjoyed this post check out the first part here. I’ve also done a more comprehensive guide last 2016 which you might want to read as well specially if you’re headed to London this time of the year: