Santorini, You’re Still As Breathtaking As You Were Five Years Ago. 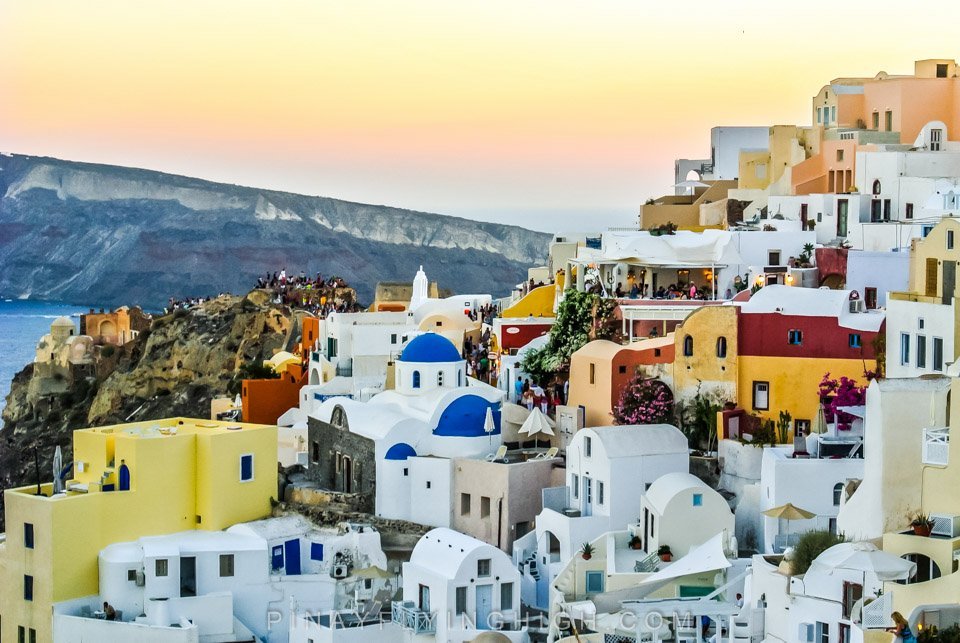 As we were planning my first holiday to Greece five years ago, I begged The Greek Mister (who was then the boyfriend) to include Santorini in our itinerary. Most Greeks who I’ve met aren’t big fans of this very famous island because it’s too commercialized, too expensive, it doesn’t represent the real Greece and the beaches are crap compared to the other islands. I think they hate the fact that it’s too popular when there are other Greek islands out there which are more beautiful and more deserving of the attention Santorini is getting. 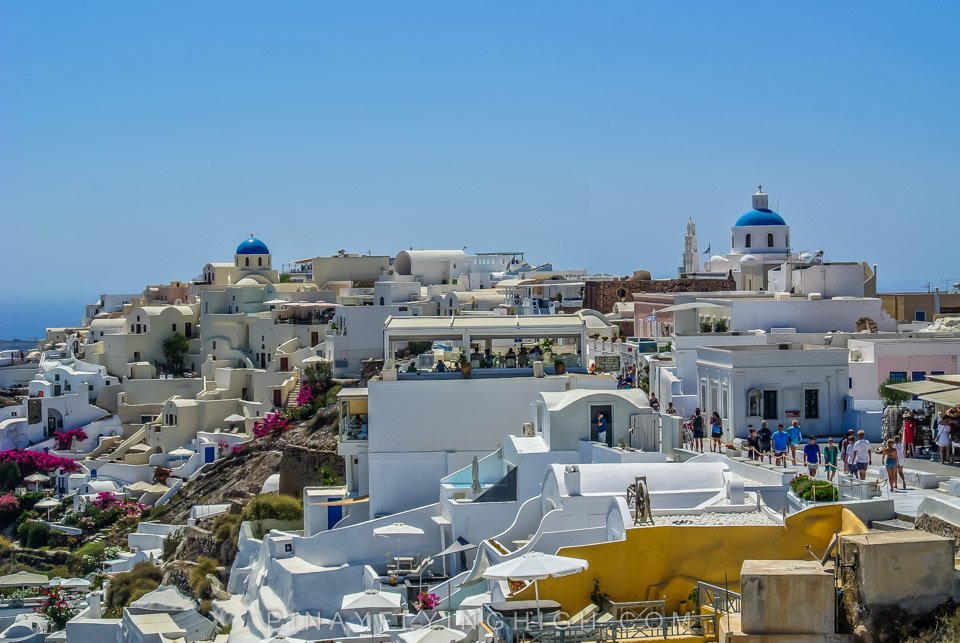 I didn’t care, I was ready to travel to Santorini on my own if that’s what I have to do. I will never pass up the chance to go to Santorini which holds the top spot in my bucket list if I’m already in Greece. I’ve been dying to see it ever since I saw a photo of it in a travel magazine so nope, not gonna skip it.

The Greek Mister having realized that I’m not going to change my decision agreed to go with me under one condition, I will not ask him to take one million photos of myself in Santorini. Done deal, although I didn’t really hold my end of the deal once I was there. 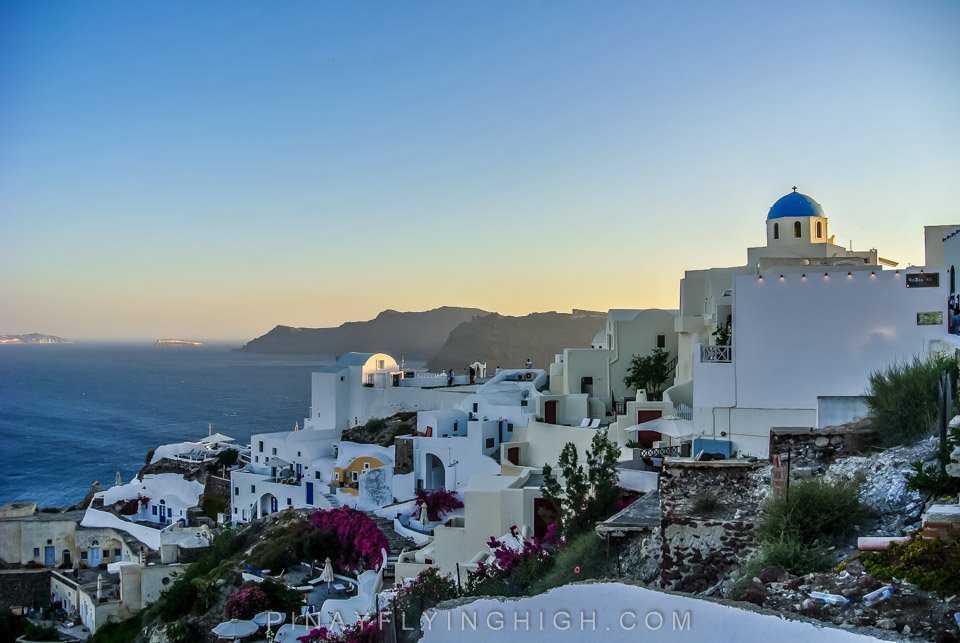 But the thing is, even The Greek Mister who expressed his dislike of Santorini so many times was amazed by its beauty. Its breathtaking beauty will make absolutely anyone fall in love with it even the most cynical person. You will never ever see anything like Santorini anywhere else in the world and since then, it held the spot of the most beautiful place I’ve ever seen. 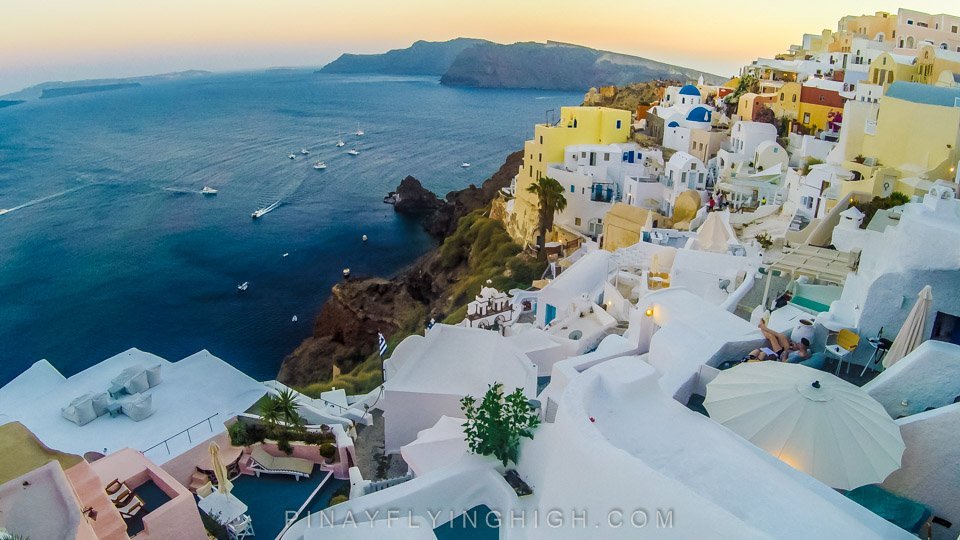 Fast forward to 2016, when I found out that my Aunt from the Philippines is finally coming to visit us in Greece – we changed our whole plan and included Santorini to be a part of our itinerary. She MUST see it! I can’t let her leave Greece without sharing my love for Santorini with her. My well-traveled Aunt on the other hand was a bit cynical as well, “Is it really that beautiful?” she asked. I guess she’ll just have to find out. I believe I was more excited about Santorini than her. Lol. 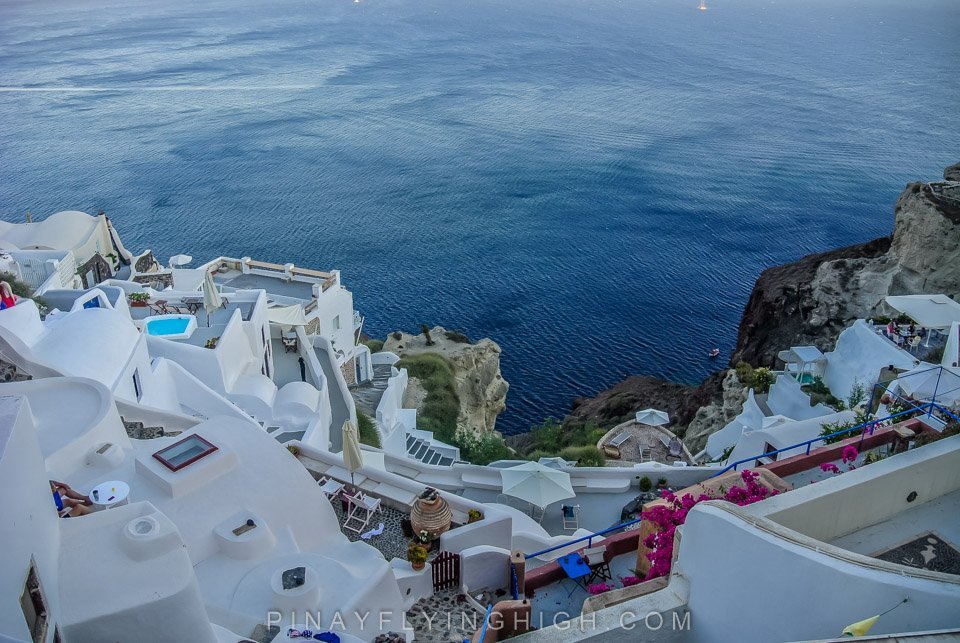 We arrived Santorini on a Monday afternoon with millions of other passengers. The tiny airport of the island I think needs to do an upgrade as it can’t obviously hold the number of people arriving. As we walked out of the airport, my Aunt asked “Where are the blue houses? I haven’t seen any of them as our plane’s landing.” I laughed as it was my exact same question when I first arrived in Santorini 5 years ago. I told her to be patient as we loaded our suitcases in the tiny trunk of our tiny car rental. 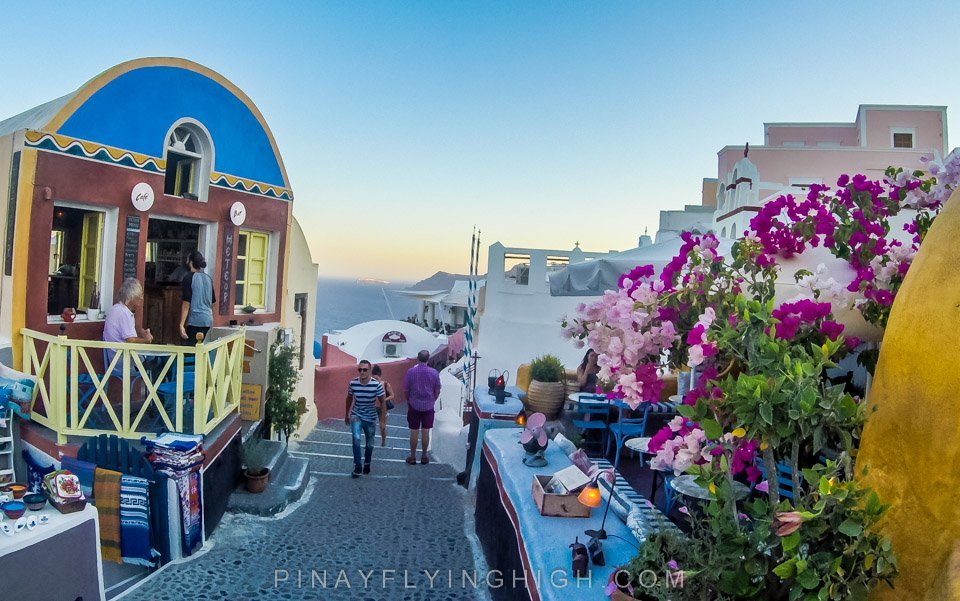 Just like before, we stayed in Finikia area which is just a few minutes away from Oia but with cheaper prices and lesser crowd. Our hotel apartment was called Kiklamino Studios and Apartments which was run by a lovely lady who took good care of us during our whole stay. We rented two apartments and ours had 3 balconies with amazing views. 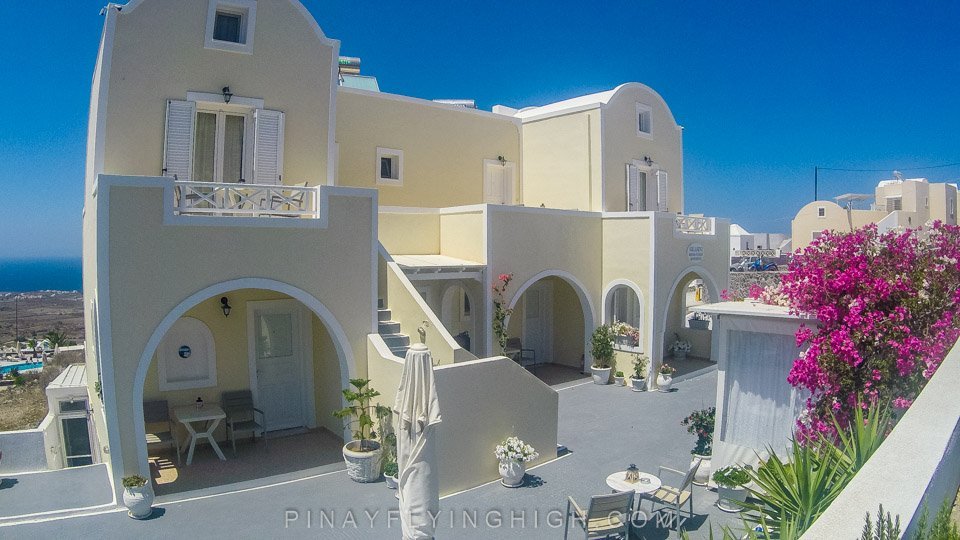 We didn’t waste any more time and started to explore Oia which is my favorite place in Santorini. My Aunt was immediately impressed by its beauty even if it wasn’t the best part yet. We had lunch at Nocturna which offered a great view of Oia. We alternated to eating and admiring the view from here. 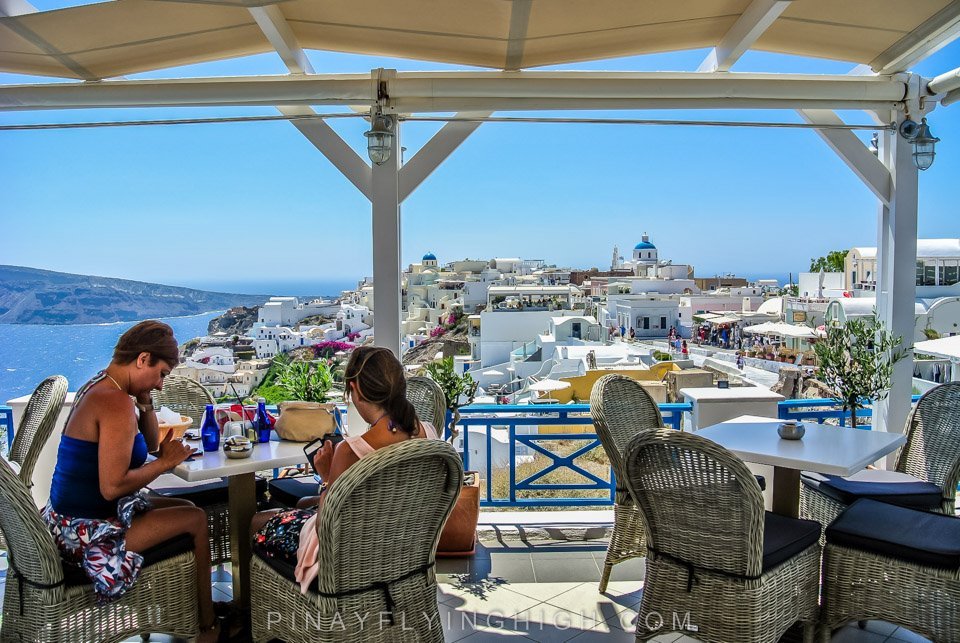 Afterwards, we mistakenly followed the crowd to do one of the most touristic thing you can ever do in Santorini and regretted it right away – viewing the Santorini sunset from Oia. Throngs of tourists were all headed towards the “viewpoint” which should’ve been a warning to us already. We were curious, so we followed them all the way to a tiny area with hundreds of people taking videos and photos of what they claim to be the most beautiful sunset in the world (which I think is a load of bull!). How can you say that it’s the most beautiful sunset if your face is up against someone’s armpit? 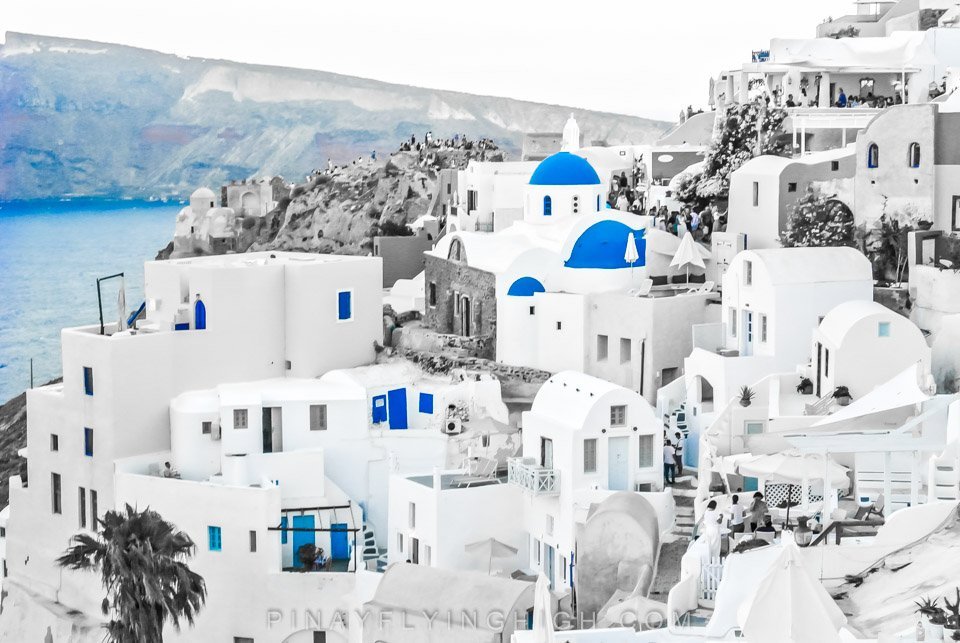 We ditched the place and went instead to the peaceful, quiet and empty side of Oia. It was the exact same place that we went to 5 years ago when The Greek Mister and myself also ditched the sunset viewing. 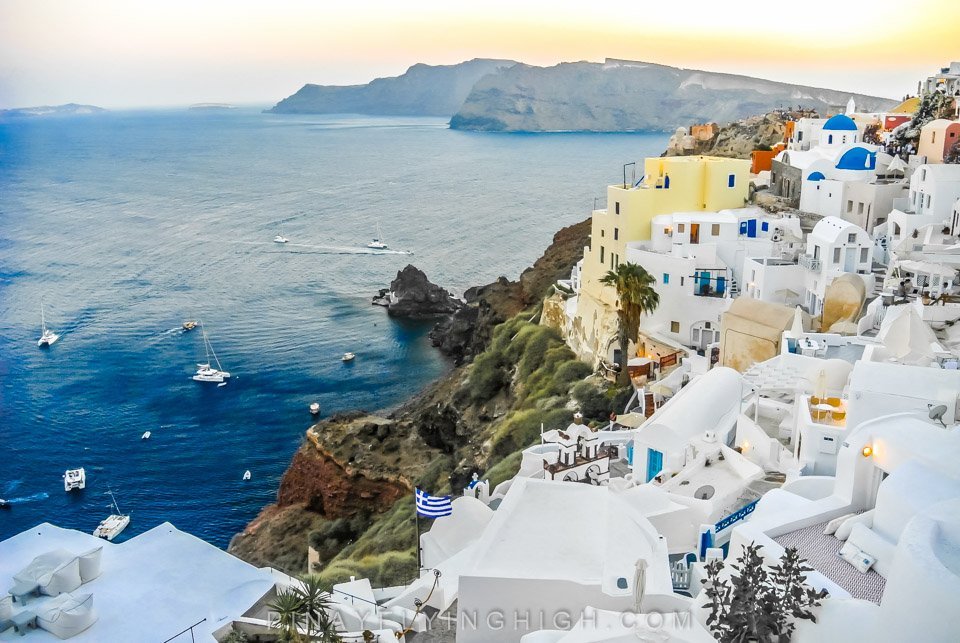 You should definitely do the same if you want to fully enjoy Santorini’s real beauty without having to deal with throngs of tourists around you. We stayed there for 30 minutes just looking out and admiring the elegance of this island. Of course, photos were taken too.

We explored Oia some more through its many alleyways, that’s possibly the best tip I can give anyone who’s bound to visit Santorini. Don’t be lazy, walk and explore each and every alley that you will see. Each turn leads you to a scenic beauty like this view for example. 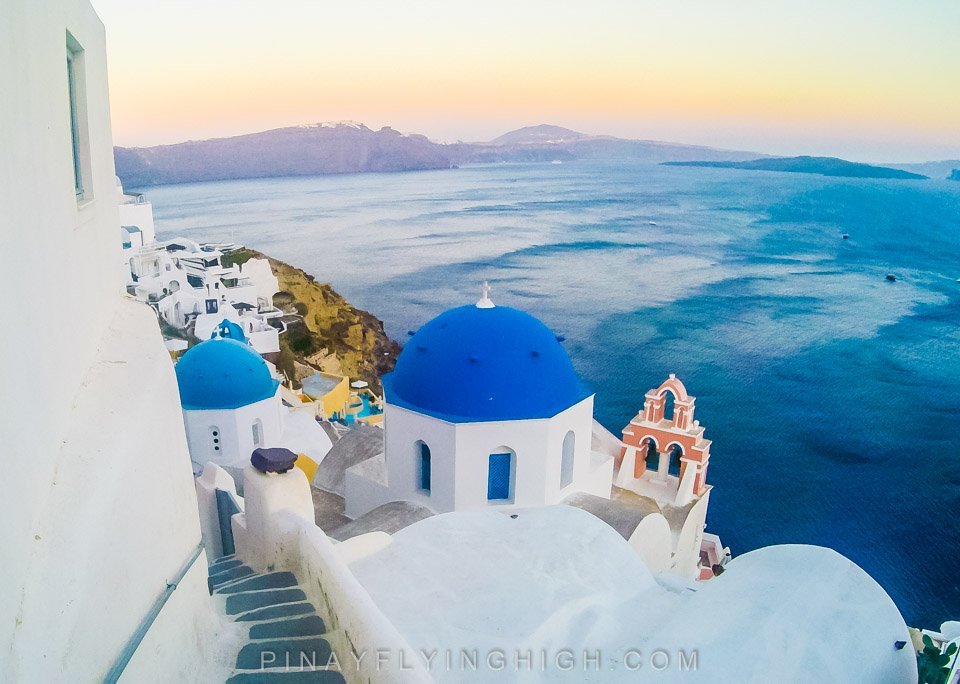 Mind the donkeys, the second best tip I can give anyone going to Santorini. If you hear someone screaming repeatedly behind you, don’t look back and immediately search for a shop or restaurant that you can go into for a bit. You don’t want to be trampled by a donkey while in Santorini because that’s embarrassing. 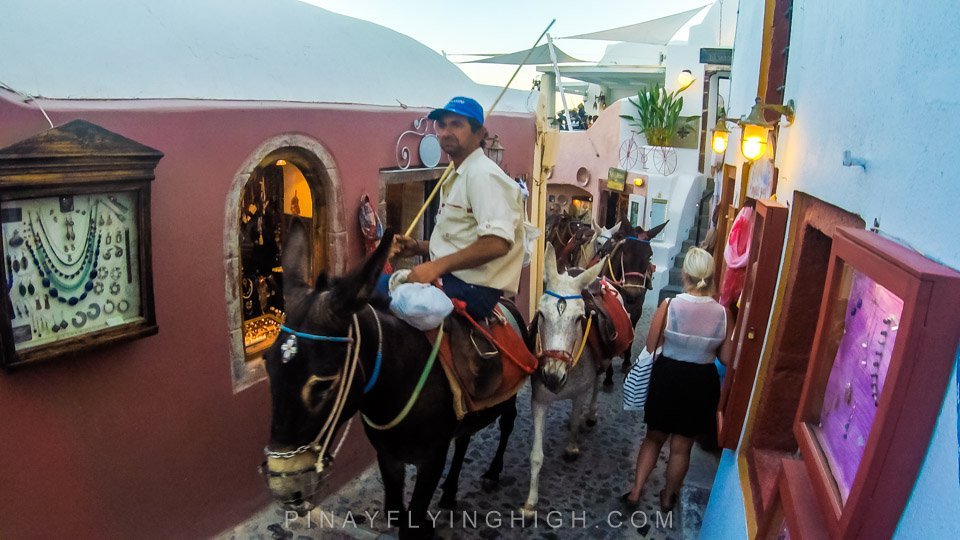 After about a thousand photos taken, we went to find The Greek Mister and his mom who were having their drinks in one of the many bars in Oia. They didn’t explore Oia with us and while both of them were also impressed by its beauty, they’d rather have a drink than deal with thousands of people around them which they hate.

We then proceeded to a taverna in Finikia, near the hotel we stayed at 5 years ago. I remember passing by it everytime we’re on our way back to our hotel then and seeing that it’s always full. So this time around, we have decided to try it out as it looked very traditional and not touristic in anyway. We were wrong, so wrong!

One of the reasons why the Greeks hate Santorini is because it’s notoriously known to have businesses not paying their taxes by not giving out receipts to their customers (not that it doesn’t happen anywhere else in Greece but it probably happens much more often here than anywhere else). In fact, just as our plane landed and we’re on our way to the hotel – my mother-in-law mentioned it to us when my Aunt made an assumption that the island must be doing very well, economy-wise. 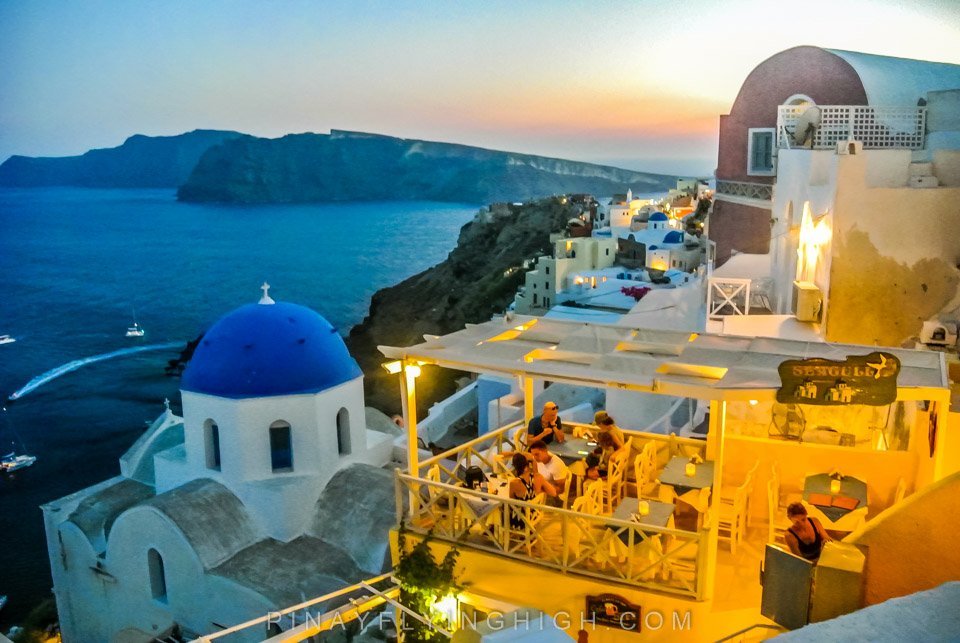 The taverna that we had dinner at was a fine example, when we asked for the bill – the waiter verbally told us the amount that we should pay. I demanded for the receipt and it was only given to us on my second request. It was a great dinner but the not-giving-out-the-receipt part left a bad taste in my mouth. I would’ve recommended that restaurant but not after that. Third best tip about Santorini, ALWAYS ask for official receipts. 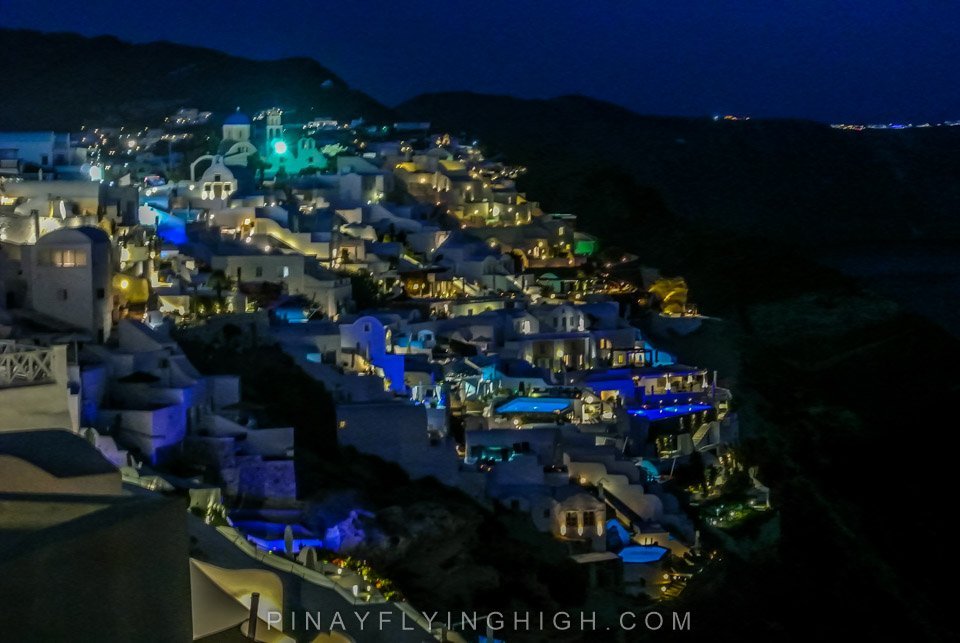 We went back to our hotel with our eyes filled with beautiful images of Oia. That’s not a bad way to start a Santorini trip isn’t it? 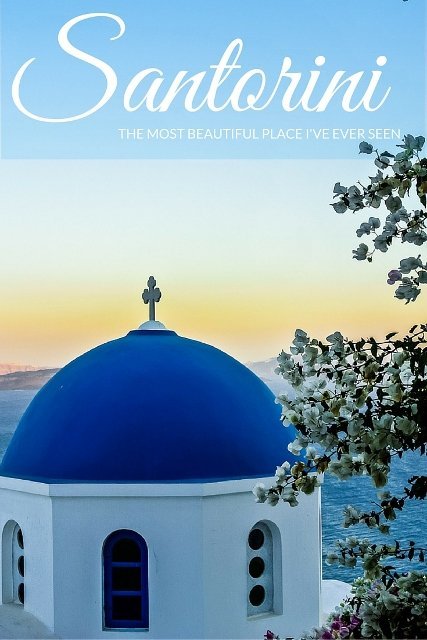