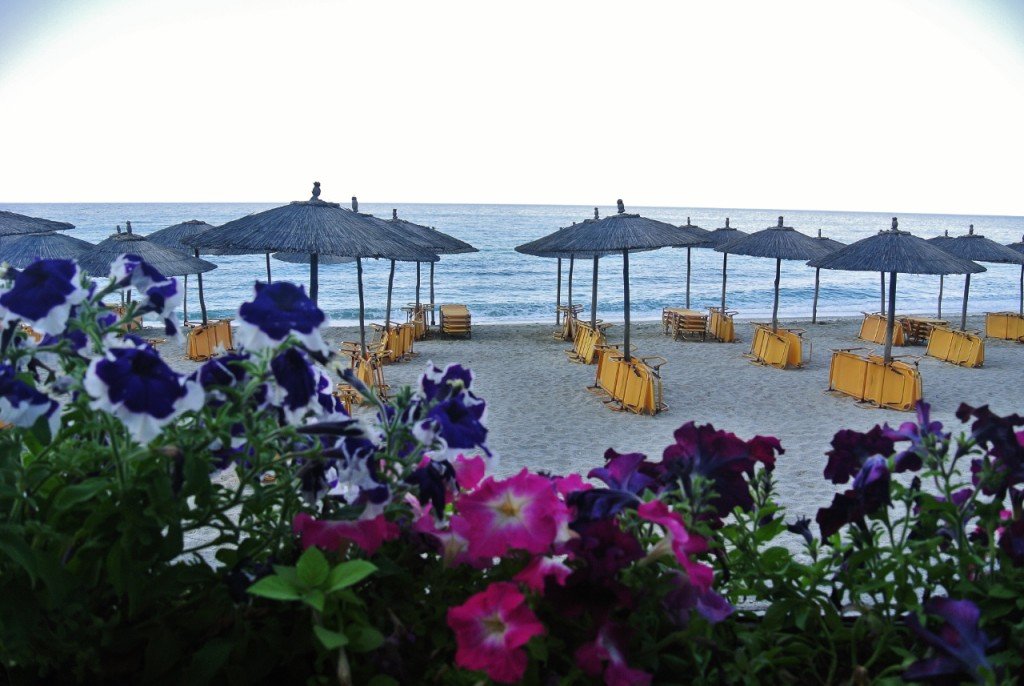 Whenever the Greek Mister tells me that he used to always go camping with his friends around Greece, I always think that it’s so unlikely of his character to go camping. He suffers from an OCD of wanting everything to be clean and neat so him camping is quite unimaginable for me. I never realized that camping sites in Greece are highly maintained and organized complete with toilets, shower, cooking facilities, electricity and even wi-fi. A small stream you’ll have to cross to go from Agios Ioannis beach to Papa Nero beach.

I thought that as a camper, you’ll have to seriously be a nature lover – be one with nature to enjoy the whole experience. To the extent that you’ll have to dig a hole in the ground to do your number 2. Forgive me for my ignorance as it is only until I saw the camping site set-up at Papa Nero did I realize that camping doesn’t have to be raw, that it could be more urbanized than wiping your face with the leaves from the trees as you eat a rabbit you caught from your self-made trap. No that is entirely not the case.

On our first day in Pelion, after we’ve dropped our bags in our hotel in Agios Ioannis – we walked over to the nearby Papa Nero beach which was connected by a pedestrian bridge. Can you see The Greek Mister being his silly self?

As we crossed the bridge, we were greeted by a stunning landscape comprising of a long sandy beach and a mountain at the end with rich vegetation. It was then that I saw the camping site on my righthand side and realized how organized it was with caravans, tents of all sizes and facilities for the campers. That covered area on the right is the camping site. Neat huh? Can you see the couple very much in love in this photo? 🙂

It was already 7pm when we went there but the beach was still packed mostly by kids and teenagers. The Greek Mister told me that it’s probably a summer camp of some sort or a school trip. They were the same kids who we saw that night running back and forth across Agios Ioannis beach as we had our dinner like some sort of a military drill. I wish we had these kinds of summer camps or school trips in the Philippines when I was a kid. I definitely won’t do it now at this age even if someone pays me, who in their right mind would want to run on a beach at 10 in the evening while someone screams at your ear to go faster? They’re kayaking as a group, they look super cute. 🙂 Most of them were already cleaning up after a day of beach lounging I guess.

The farther end of the beach was much quieter. I’m quite surprised at the size of its shore though as I’m used to seeing small coves and very short shorelines. I read on some reviews though that Papa Nero tends to be extremely crowded during the peak of summer – which would probably be around August. I can only imagine how much people actually visits Pelion to make this huge beach full. Love is in the air. Can you see them?

Tavernas, cafes and bars are lined up along the small street of Papa Nero beach. There are also a few options for normal accommodations like guesthouses and small hotels. I have a thing for mopeds. We only stayed for 4 days and 3 nights here so we weren’t able to spend a day in this beach really. I’m glad we were able to see it though, I think it would’ve been a good base for us as well if we didn’t already book a hotel at Agios Ioannis area.

Have you gone camping before? Do you think this place would’ve fit your criteria of a good camping area?

Barbican Conservatory, A Jungle In The Middle of The City

The (Mis)Adventures (Of The Cuckoos) On A GoBoat

PrevPreviousFrom Thessaloniki to Pelion, From a City to a Paradise.
NextThessaloniki, Greece: Breakfast Coffee with a view at Les Zazous.Next