Doha, Qatar | I Am A Nobu Virgin No More. 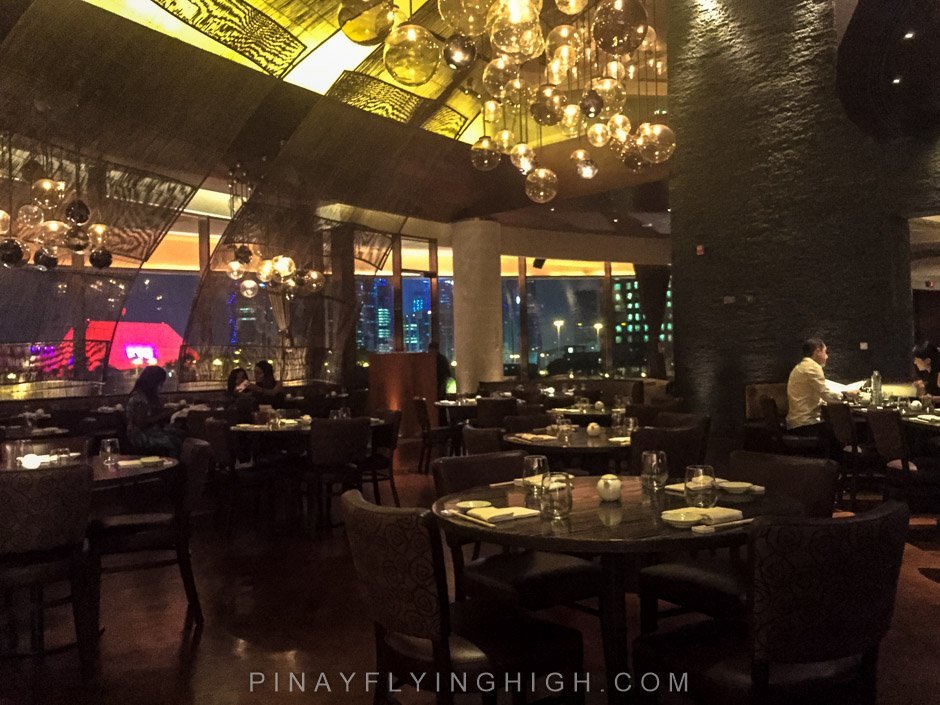 Let me tell you a secret, I hate going to expensive restaurants. You know those kinds which expects you to pay a month’s salary and your first born child for a meal where you will get a tiny portion of food on a plate much bigger than your face? You know the kind? Yeah, I hate those. I’ve declined quite a few invitations to try those kinds of places in the past because it’s just not me and I know that I will find things to complain about even if it’s non existent just for me to continue hating it.

This month however, I tried a different approach. I told myself that I will only eat in these fancy places if I’ve been invited to try it out, that way – I win because I’m not going to pay their exorbitant fees for a food. That approach definitely didn’t work because both times that I finally gave in and tried two of the fanciest restaurants in Doha, it only made me realize that I’d be willing to pay their prices no matter how expensive it is  to get a taste of their dishes once again. (Fancy restaurants : 2, Pinay Flying High : 0).

Such is the case for Nobu which I have avoided like a plague for so many months – declining invites from friends who seem to be addicted to it specially since they’ve launched their now very popular happy hour. The invitation from Nobu came two weeks ago with a lure of being the first to try the special menu of their first anniversary and spending time with my all-time favorite people in the blogging industry of Doha: Life On The Wedge, Boulangerry and The Snapped Fork. I know even before it happened that it’s going to be a crazy night and if I don’t enjoy the food (because I’m too busy hating on it), at least I’d enjoy the company I’m with.

The hating on the food part didn’t exactly happen as planned, in fact I didn’t have time to hate on it for even a single second. Just like the previous fancy restaurant I recently visited – it blew me away. We started with a huge tray of their famous tapas, the blogger friends were nice enough to let me have the first taste of each dishes because I’m the only Nobu newbie in the group (aren’t they the best?).

Each dishes had its own unique flavors which I didn’t even realize it could have. As much as it’s hard for me to pick a favorite, I think I fell in love with the chicken wings which definitely had that umami taste. We then proceeded to the omakase menu for Nobu’s One Year Anniversary.

Nagasaki farmed chutoro with karashi miso and osetra caviar was our first plate, the fatty tuna belly tastes so fine it spun my head around. It had a creamy texture which makes it melt in your mouth beautifully and the karashi miso definitely added great flavors into it.

Next was the assortment of sushi: tuna with wasabi zuki, salmon new style, scallop tiradito and king crab shisho salsa. The assortment was carefully planned I think as each sushi had unique flavors which will make your taste buds go crazy. I have never eaten a dish so slow as I have eaten all these sushi as I simply want the flavors to linger in my mouth just a tad bit longer before I indulge on the next one. 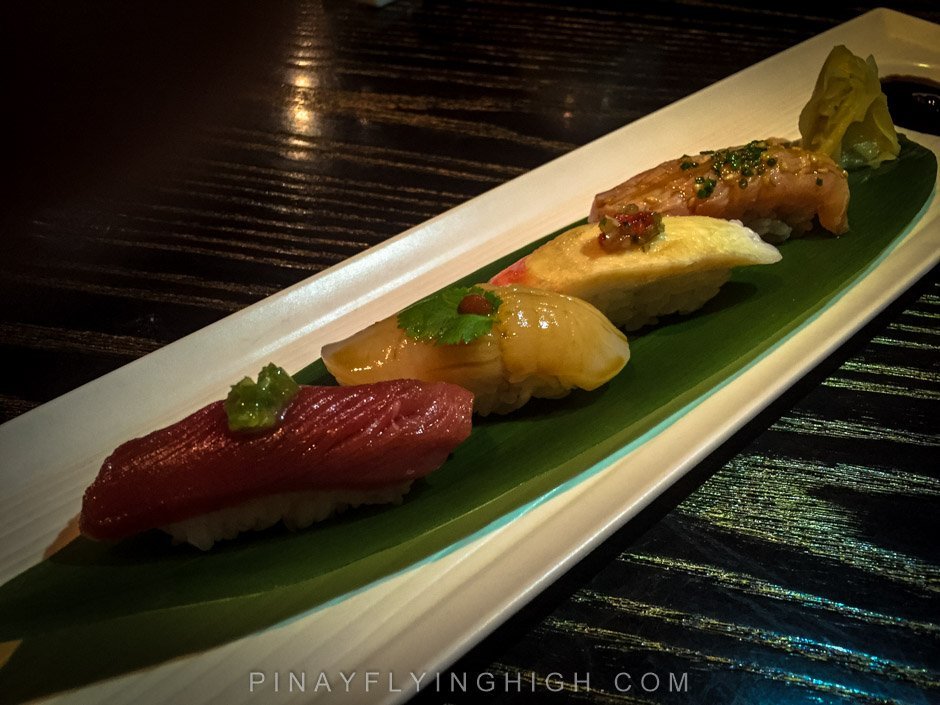 Our next plate was the shrimp and lobster mushroom salad with yuzu dressing which I wasn’t a big fan of. For my untrained taste buds, it simply didn’t give any flavors for me to make me go crazy. Compared to the other dishes served previously, I thought this was the simplest served in this menu.

The king crab ratatouille ponzu was a favorite of everyone except for me. It had that odd taste which was so familiar to me and my taste buds have never approved of. It was truffle oil as advised to us. See? Even my tongue doesn’t agree with the luxurious taste of this fungus which is considered as the most expensive in the world. Don’t listen to my tongue, it doesn’t know what its missing. You will love this dish for sure. 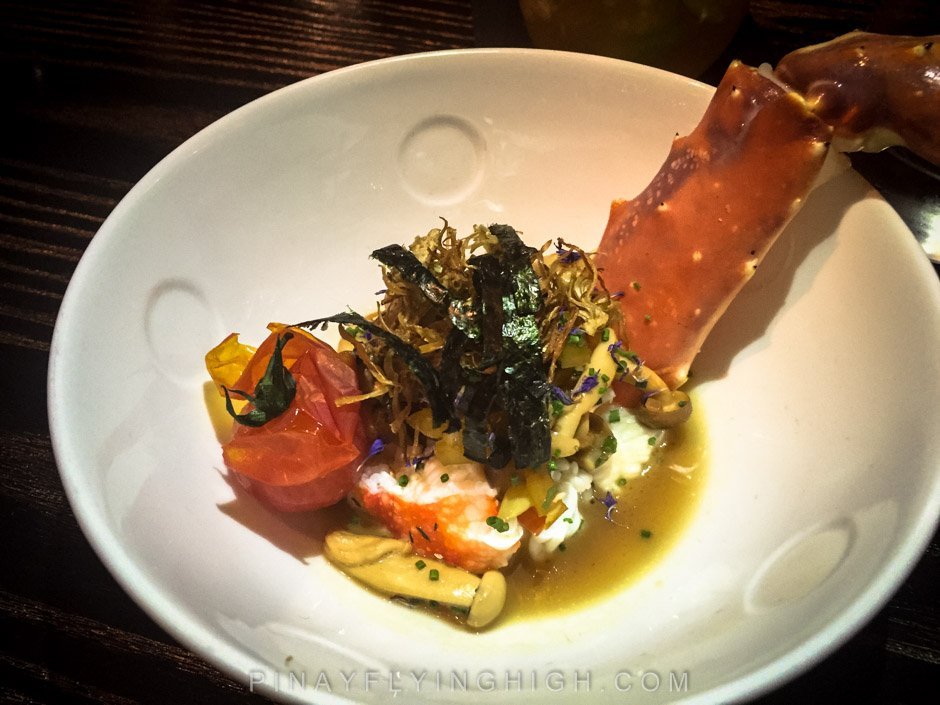 Then the highlight of the evening came which I think deserves a standing ovation when delivered to your table – the A7 wagyu beef with goma cauliflower mousse and teriyaki jus. The meat was so tender and perfectly cooked that I think even those without teeth or those on a soft diet could eat it. Lol. On the other hand, The Snapped Fork had to skip this dish as she’s not much of a meat-eater. She was given a black cod instead which apparently is a signature dish of Nobu, of course I didn’t know this because I was just breaking Nobu virginity that night. 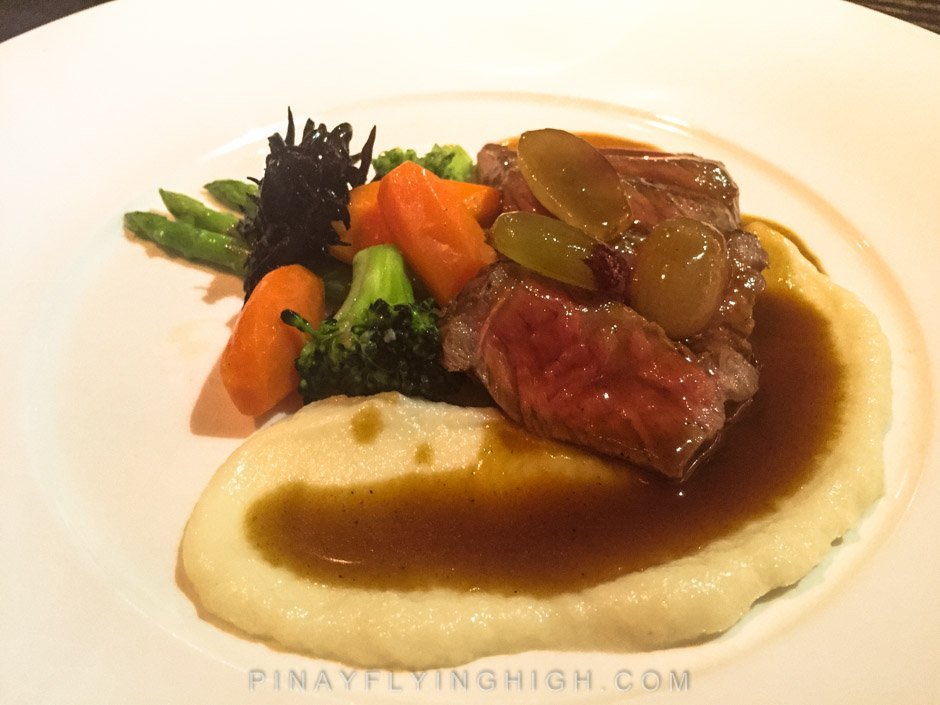 Sara was nice enough to let me have a few bites of her black cod in fact, she wouldn’t take no for answer so I took a bite. My mind was blown and my life has changed right after that bite. That is by far the best fish I’ve ever eaten and a dish I will certainly have whenever I’m in Nobu over and over again. Unfortunately, I have already ruined the nice presentation of the black cod so there’s no picture of it. I’m sure though that if you search “black cod of Nobu” it would give you endless image results of this highly acclaimed Nobu dish and this I tell you, it tastes better than it looks. So much better.

I wasn’t able to finish the wagyu beef as the black cod taste in my mouth was so strong that I think whatever dish was served to me after that life-changing bite will do no good for my taste buds. G and R were happy to finish my wagyu beef serving as it would be heartbreaking to have it as a leftover while S let me finish her black cod. I owe her drinks and probably this dish as well. Next time S, next time.

Shiso sago pearls and mango agar with peach rosewater sorbet was the last plate for this evening. As I’m not much into desserts, I only had a few bites of this dish before the rest of the group devoured it. I think it’s also the fact that I wanted the black cod taste to linger the last in my mouth. I’m pretty sure that was the case.

I’m the kind of person who won’t find it hard to admit a mistake and avoiding Nobu in the past is possibly one of the biggest mistakes I’ve ever done here in Doha. I now can’t help myself but think back of all those times I could’ve enjoyed the dishes of Nobu but because of my hard-headed nature, I missed it. I am mentally kicking my arse right about now. The best advice I could ever give anyone is don’t hate on anything you haven’t tried and reserve that table in Nobu to get a taste of this menu next month.

The Anniversary Omakase menu will be served for the whole month of May to celebrate Nobu’s first year anniversary. On May 1, Nobu Doha will uncork its celebratory month with a complimentary glass of sparkling wine for each patron in the main dining room.  Additionally, each guest who orders the special omakase menu will have the opportunity to win Chef Nobu’s cook book, signed by the celebrated chef himself. The Anniversary Omakase menu is priced at QAR 450 per person and is available May 1-31, 2016.  To learn more about Nobu Doha’s anniversary celebration or to make a reservation, call

I was a guest of Nobu Doha during this meal however as always, photos are my own and opinions stated are genuine and in no way influenced. 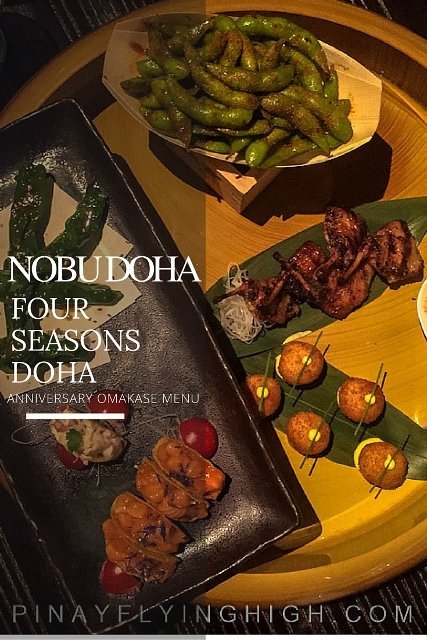