I have to say that this year was definitely the most laidback New Year’s Eve celebration I’ve ever had in the Middle East which is entirely my fault. We spent it at La Veranda in Sheraton Doha but I don’t really blame them at all. It was me who didn’t take notice of what they have included for entertainment that night as I have assumed that it’s going to be festive and fun just how a New Year’s Eve celebration should be.

New Year’s Eve is that one day of the year that The Greek Mister and I have always considered very special. We’ve always wanted to welcome the new year in a fun and festive mood so we’ve always considered going out for the night. Considering the prices of NYE dinner parties in Doha, we were expecting that all of the restaurants would prepare something extraordinary and fun for the evening. Couldn’t be more wrong. What we experienced while making the reservation should’ve been a warning for us already. As soon as the festive event schedule was released, we immediately went to Sheraton Doha to make an advance payment which they required for the NYE dinner at La Veranda. The whole process of booking was already a bit off, the staff who was doing the NYE dinner reservations wasn’t getting any assistance from any of the front desk staff who were supposed to take the payment.

I felt sorry for the person handling the dinner reservations as I clearly can see her struggle while communicating with her colleagues to process the payment. Anyway, as soon as the booking and payment was done – The Greek Mister told me that he doesn’t feel good about the whole thing and that we should keep the receipt given to us. We both weren’t confident that they made the reservation correctly and we were quite sure that some confusion will happen on New Year’s Eve itself.

We were not wrong because as we arrived at La Veranda on 31st December, they couldn’t find my name on the list. We had to wait for quite sometime before someone who finally knows what she’s doing took over – Maria. I can’t thank her enough as she was absolutely helpful and very efficient. She also arranged another table for my friends who weren’t able to make a reservation for that dinner. Once the table confusion was settled, we were finally able to enjoy the magnificent views and ambiance of La Veranda.

Hands down, La Veranda has one of the most fantastic city views of Doha city skyline. It was a clear night so we could see all the twinkling lights of the buildings across the sea from where we sat. It was lovely and a very romantic place which is why I somehow understand why they preferred to have a band which performs mellow and soft music throughout the night. It’s not really their fault if it didn’t work for us is it? The buffet spread doesn’t have much option but it is definitely good enough for me. As the saying goes, quality over quantity – I believe that a buffet-style dining doesn’t have to have so many options – they only need to have good ones which La Veranda definitely had. My favorite from the spread would be the seafood cannelloni and the lobster risotto. The meat options that they have wasn’t so bad either – I loved the lamb rack which was very juicy and the baby chicken. It was a great spread, maybe not very extensive but enough to satisfy anyone’s craving. 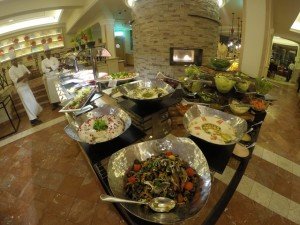 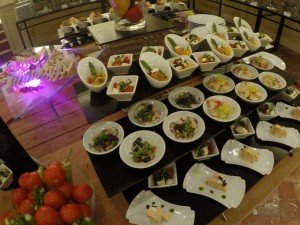 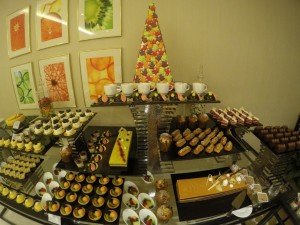 The service wasn’t so bad either, after the mishap at the beginning of the night – everything went well. We opted for a package which would include unlimited alcohol and our glasses were never left empty by the attentive staff around us. It was a busy night for them but they were all quick and were able to attend to each of their guests’ requests.

Finally, the countdown to welcome the new year – it was non-existent. The band tried to start the countdown for us but even then, they were very mellow so we couldn’t even hear it well. We just found out that it’s already midnight when the balloons they were holding at the top of the stairs were released. Could’ve been much nicer if everyone joined in the countdown.

So yeah, I wasn’t very pleased with my New Year’s Eve celebration experience at La Veranda. It’s a very nice restaurant though which serves great food but I’m not going to seek it again for a new year’s eve celebration next year unless they have arranged something a bit more extraordinary and fun.

How about you? How was your new year’s eve celebration?

PrevPreviousHighlights of 2015 | My Year-End Review
NextThe Great American Bagel, A Bagel For Every Taste.Next