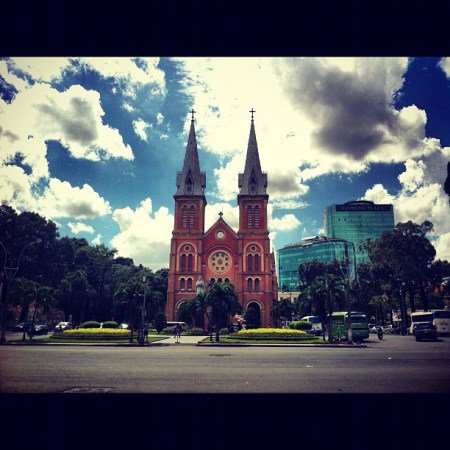 This trip was all sorts of things before I finally decided that I’ll go to Vietnam. It was Brazil and Peru at first on August but then our management did not allow me to go that month so I needed something quick and cheap for a few days this month instead. First priority was London but with the Olympics well on its way, the hotels are ridiculously expensive and since I’m traveling by myself – I’m not really sure if I can handle the crazy subway system they have there. I chose Vietnam finally after much deliberation as we’ve got a direct flight there, I don’t need a visa and it’s cheap. So off I went to Saigon. I must admit that the trip wasn’t how I expected it to be as it was so much better!

When in Saigon, do what the tourists do 🙂 :

Days before I traveled to Saigon, I downloaded a lot of documentaries about the place. Lonely planet, history channel, travel channel and even Anthony Bourdain and Andrew Zimmern were both a big help for me. The soundtrack of Miss Saigon, the broadway musical was also downloaded. Haha! I was particularly interested about the Vietnam War and found it fascinating that Ho Chi Minh was very much like our Filipino national hero, Jose Rizal. He was fighting for freedom of Vietnam against the French and this is an excerpt from one of his letters to the US President at the time, Truman:

I also found it really interesting that if only United States responded on one of his letters, Ho Chi Minh would not have sided with the communist and the war would not have started. The US only became responsive when this became the case and they were deathly afraid that if Vietnam will be a communist country, then a lot of South East Asian countries may follow suit and they will not have access anymore to these countries. Like for example the agricultural products only the Asian countries are blessed with? That’s just me, a non-historian, thinking out loud. Anyway, the fact of the matter is – Vietnam has a rich history and me, being a Filipino, can totally relate to it. It’s good to know the story behind every place that you’re going to see. At least that’s the case for me.

In Vietnam, you literally are a millionaire. I’ve set a budget for myself of around USD50 for 3 days and 2 nights and I still got some extra cash during my last day and was able to get a 30-min foot massage while waiting for the flight. It’s amazing how cheap that place was, we were paying only about a dollar for a greatly satisfying meal. YUM!.

Hello Hotel was ranked number 2 amongst all the hotels in Vietnam by booking.com users. I trust that website as I usually book my hotels with them. Hello Hotel is located at District 1, very close to the backpacker’s district area but on a quieter, more peaceful side. It is also walking distance to all the tourist spots of Saigon like Ben Thanh Market, Opera House, Reunification Palace, Notre Dame Cathedral, Post Office – everything. I should know because I walked to all of those places from the hotel. The only downside is, it is in an alley and quite impossible to look for specially if you’ll be taking a cab. I booked an airport – hotel transfer with them (USD16 for two passengers for a one way journey) just so I wouldn’t have the problem of searching for it during the first day. The staff at the hotel were all great! The rooms are pristine clean with your basic necessities and they serve an authentic Vietnamese breakfast. They will even pack your breakfast for you if you’re checking out early. It is extremely cheap at USD22 per night and the service you get is exquisite. I just hate climbing those stairs! 🙂

Clean toilet and bathroom. Another yey!

Cabinet, TV, study table and a mini fridge well-stocked with beers, softdrinks and the whatnots.

A lot of people miss this because it’s about an hour and 30 minutes away from Saigon proper but after all those documentaries I’ve read about the Vietnam war, I am keenly interested to visit this place. Cu Chi Tunnel somehow reminds me of District 13 in the Hunger Games trilogy, an underground community. Hehehe. I booked my tour at the hotel itself and it’s only about USD12.00 per person including return hotel transfers and English-speaking guide. The tour was conducted by TNK Vietnam Tours and it was a pretty detailed one. At the end of the tour, you get a chance to fire some real guns. You can also go inside one of the tunnels which will last for 15 minutes, I tried to but just seeing the narrow and tiny hole that I have to crawl on makes me all jittery and claustrophobic.

The obligatory tourist shot of a guerilla going inside the tunnel.

It’s true, there are about 4 millions motorcycles in Saigon alone and crossing a main street is not for the faint of hearts. The first time I tried to cross the street, a Vietnamese guy in a corporate attire assisted me. Second time, a policewoman did the honor while the third time, a woman selling coconut juice from a cart stopped the traffic for me. Yeah, Vietnamese people are nice – contrary to what I’ve heard before going there.

As previously mentioned, I’ve heard a lot of bad things about Vietnamese people trying to con tourists all the time but I’ve never felt like that at all when I was there. Being Asian and looking like a Vietnamese probably helped a lot but seriously, I find Vietnamese people extremely nice. I somehow made a friend out of the hotel receptionist who spoke really good English. She’s funny and sweet and loves watching Filipino telenovelas (Filipino artists are very famous in Vietnam apparently).

I found out the last night of my stay in Saigon that our hotel is located a few blocks away from the backpacker’s area. There’s a very famous bar called Crazy Buffalo in that part of town and the receptionist recommended me to go there. So I went but instead of going to the Crazy Buffalo, we stayed at the the bar opposite it called Go2 Bar. It reminded me of Bangla St. in Phuket, people are drinking on the sidewalk while locals try to trap tourist with their overpriced goodies such as roses, cigarettes and some other things you don’t really need. Hookers are also everywhere, well it may sound like a very trashy area but I’ve no idea what came to me but I somehow liked the laidback atmosphere it gave me. Although I’m pretty sure some people thought I was a hooker. :p

8. Walk around the city in the wee hours of the morning.

The breeze is cooler compared to the heavily polluted and humid air that you get during the day. Saigon is quite a safe place but of course it might have helped me because I was walking around the city with someone who can probably beat 5 Kung-fu-fighters all at once. Generally though, Saigon didn’t make me feel unsafe except for taking a cab by myself. Something about that which doesn’t make me comfortable.

9. Get caught under the rain and then eat Pho.

After living in Dubai for 5 years, seeing rain gets me really excited. So when the drizzle came pouring down, I savored the moment and walked with a slower pace before reaching the post office to seek shade. I missed the sound of rain as it pitter patters on our rooftop and I’m lying down all curled up under the sheets. Well, the rain brought some good memories back. When the rain finally calmed down, we went to eat Pho at a famous chain which serves this Vietnamese dish – Pho24. I ordered the one with everything in it (including beef innards) and it was soooo good! Specially after the rain while we’re still a bit soaked. That was the best meal I’ve had in Saigon!

Now this one is out of the ordinary for me. Before heading to Saigon, I have constantly checked the photos uploaded on Instagram with hashtag Saigon or Ho Chi Minh as I was very much concerned about the weather. Haha! I think I have bombarded a lot of people asking them every single day if it was raining or just looking at their photos to see if it’s sunny or rainy at the time. Anyhow, one of those unlucky people who got bombarded with questions was nice enough to arrange for us to meet so he can show me around, probably his way of saying: “Lady, leave me alone and stop asking stupid questions over and over again. Cross the bridge when you get here will ya?”. Anyway, he has been in Saigon for over two weeks at the time teaching English. A true gentleman in every sense of the word with a little bit of weirdness during the wee hours of the morning. I was actually looking forward more on having a taste of some of the food he’s been posting on Instagram which made my mouth water just by looking at them. Luckily, I met him as it made going around Saigon a whole lot easier for me and this trip much better plus, I gained a new friend. 🙂

And here’s an open letter to him:

Once again, thank you for accommodating me in your very busy schedule. It’s been a lot of fun being able to take a shot of the Opera House with you as my human tripod, also for introducing tea with ice to my life. Rest assure that you can count on me if ever your travels lead you to Dubai or the Philippines. And remember, Saigon is your oyster and a pearl somewhere in that oyster awaits you. :p

P.S. Let me know how the ping pong show goes in Thailand.

I leave you now with my favorite place in Vietnam, the Notre Dame Cathedral. Not exactly sure why I loved that place, I just kind of fell in love with it the moment I saw it.