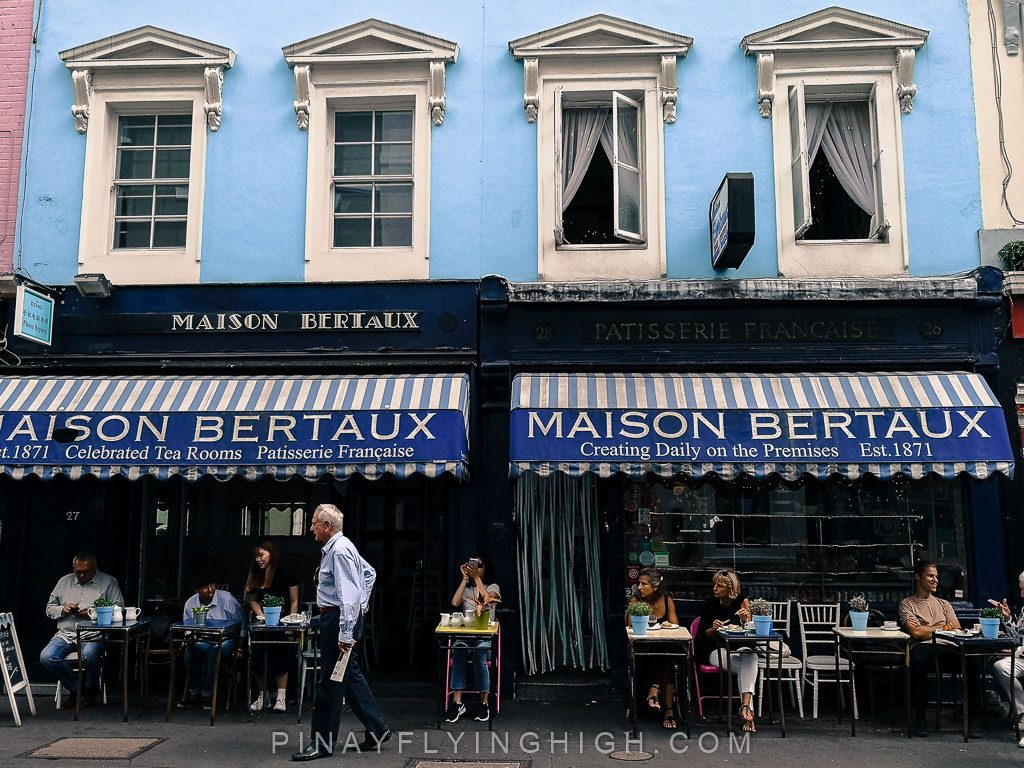 I feel like it’s been ages ago since I’ve done a London walk, I haven’t been around for the past few months and I’ve always had weekend days off as well. I’m not complaining but I prefer doing this walks during a weekday when there’s not much people around London. :p

So my destination for the recent walk was Soho but the real reason for this walk was food, I’ve wanted to try out a dish served by a very a small food stall which happens to be located in Soho so instead of just going there to eat – I decided to combine it with a bit of exploration as well while there. I took the tube to Tottenham Court Road and walked towards Pillars of Hercules pub which first opened on this site in the 17th century and is mentioned in A Tale of Two Cities. Soho use to be a hunting ground owned by the Church during the Middle Ages. The ancient hunting cry “so-ho!” may be the origin of its name. 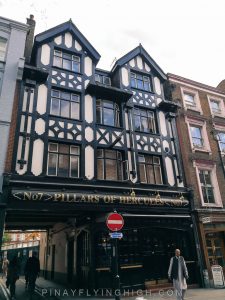 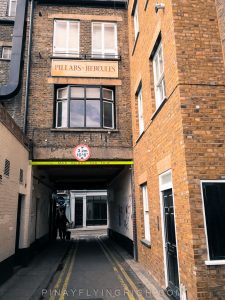 There’s a narrow alleyway below the pub which brings you straight to Greek Street of Soho. Many Greeks moved to London in 16th century and settled here to escape the persecution of the Turks hence the name of the street. Germans, Italians and Jews fleeing revolutions/wars from home followed. In the mid 20th century, the Chinese came as well and created Chinatown which many consider to still be a part of Soho. 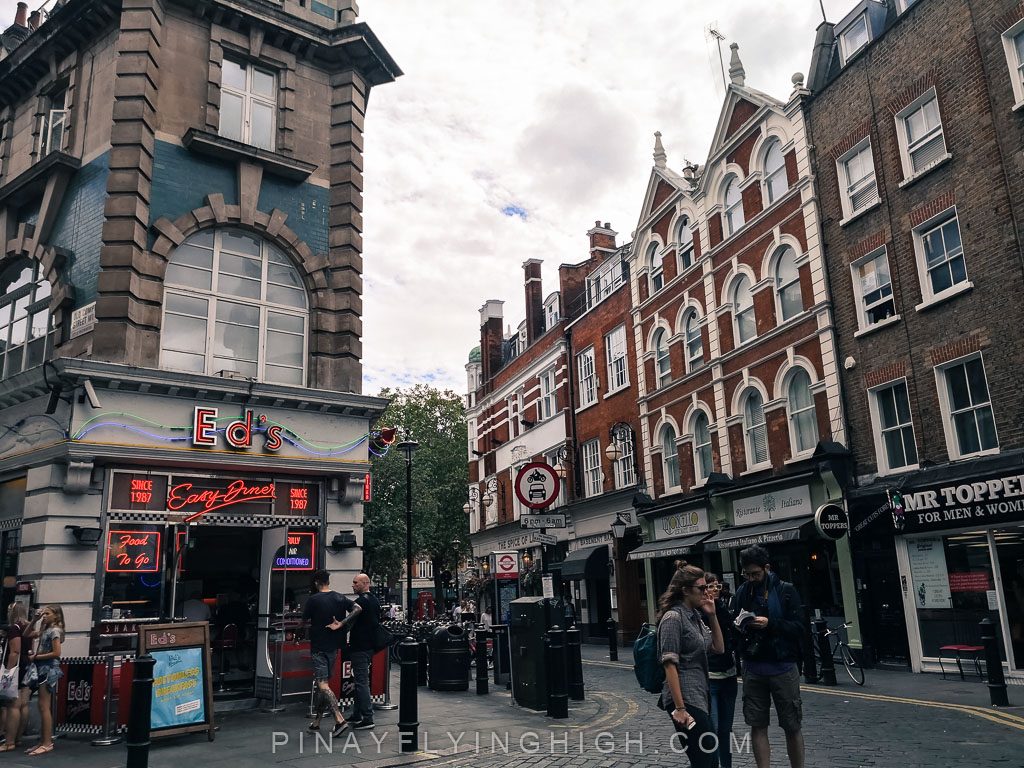 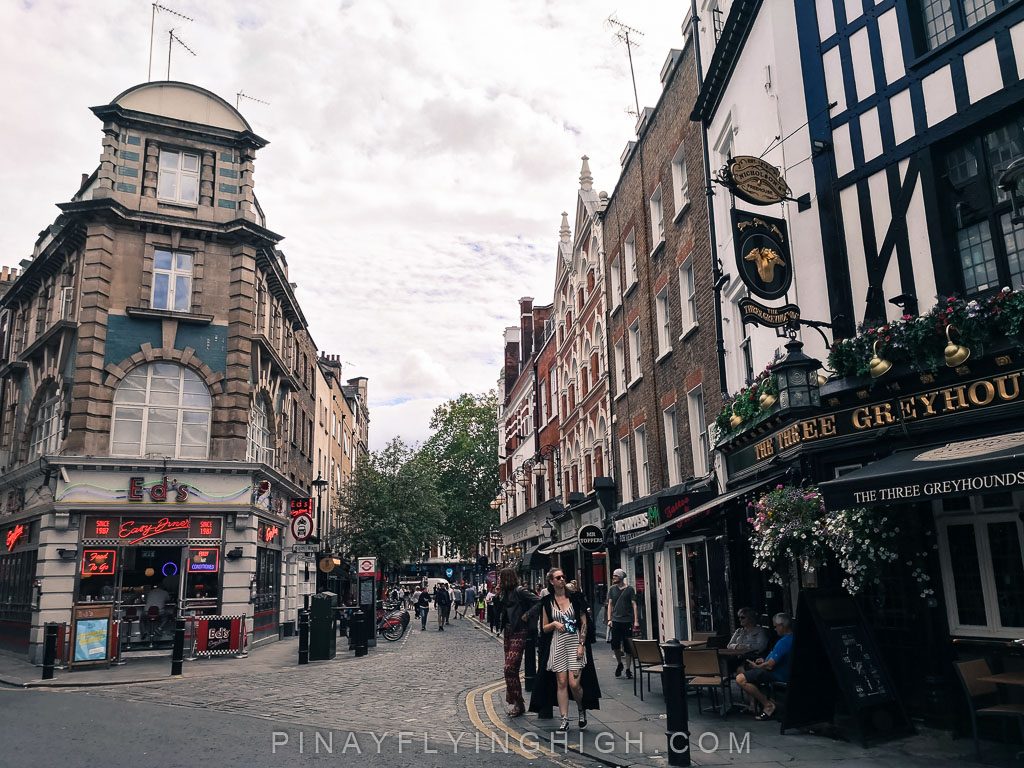 I arrived just at lunch time and at exactly 12 noon I bought myself a Jian Bing from Pleasant Lady which was the very reason I was in Soho that day. Jian bing is a traditional Chinese streetfood normally eaten during breakfast. It’s a thin crepe filled with all sorts of Asian concoctions and your choice of meat, I chose to have it with grilled miso chicken which was wonderful. It’s supposed to be eaten on the go so I went to the nearby Soho Square to finish it while trying to shoo the pigeons away from my meal. 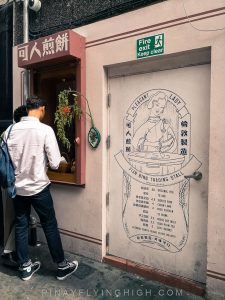 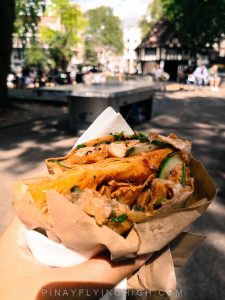 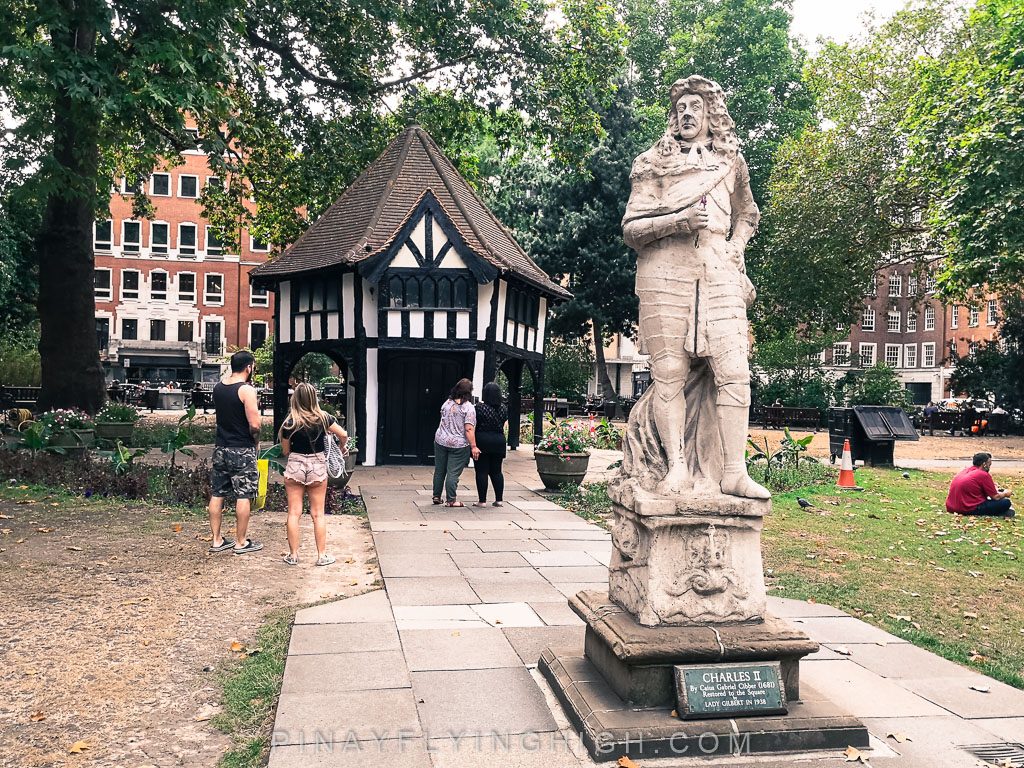 After lunch, I passed by the House of St Barnabas which is one of the finest examples of a Georgian mansion in London. It’s now a charity to help the homeless back into work. The nearby St Patrick’s Catholic Church also provides assistance to many homeless people in the streets of Soho. 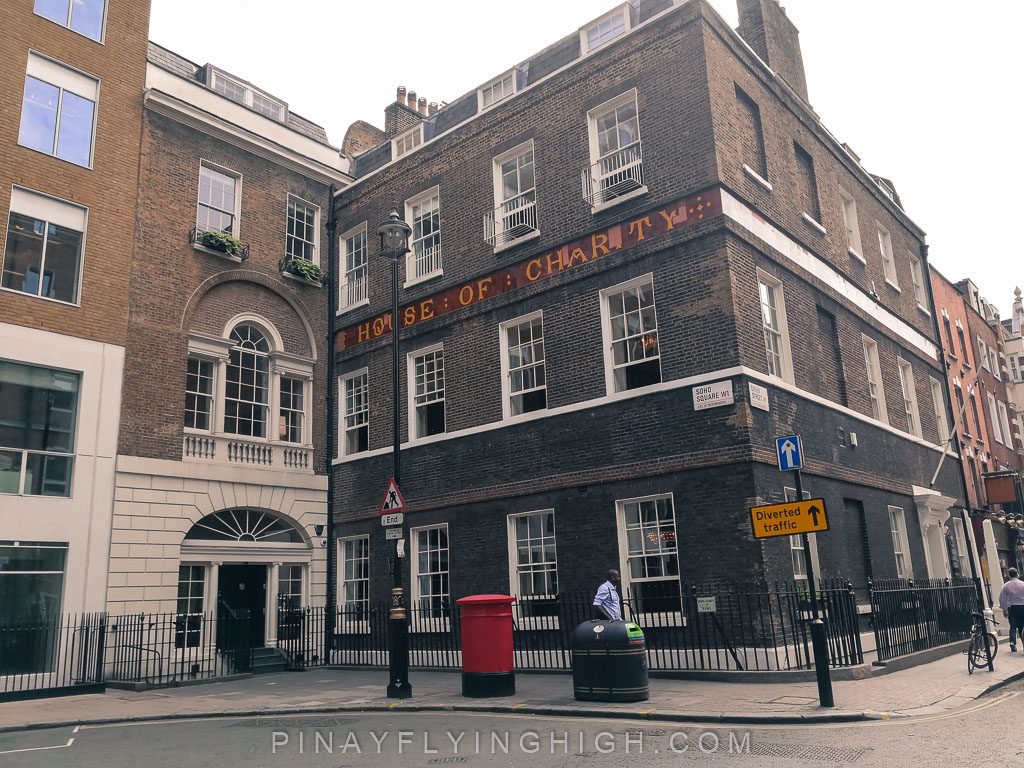 I walked along Greek Street and came across the House of Minalima. There were so many queuing to enter it earlier when I had my lunch so I was intrigued as to what it is. At closer inspection, it’s a house filled with Harry Potter paraphernalia and while I’m not really a fan of the book nor the movie, I still have a quick look around all the 4 floors of this store. It was cute and there were a lot of unique HP merchandise in it, HP fans will definitely be delighted. 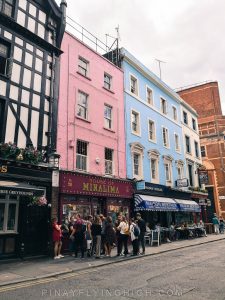 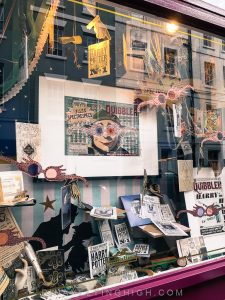 I went to Maison Bertaux next, London’s oldest patisserie and cafe that has served some of the best cakes in Soho since the 18th century. It’s believed that Alexander McQueen, the famous fashion designer, used to pop in here for a cuppa or a pastry. I had to try it myself even if I’m not into sweets, the verdict? I didn’t like it. Lol. But I’m sure sweet-toothed people will find something tasty in this bohemian cafe, it’s just not for me. :p

You can also find one of the world’s most famous jazz club in Soho called Ronnie Scott’s Jazz Club. The intimate environs of the club attracted some of the top names in the jazz industry to perform, Jimi Hendrix had his final performance here in 1970. Opposite is Bar Italia, a famous Italian restaurant for the late night revelers of Soho to go to. The room upstairs is where the first live television broadcast happened in 1925. 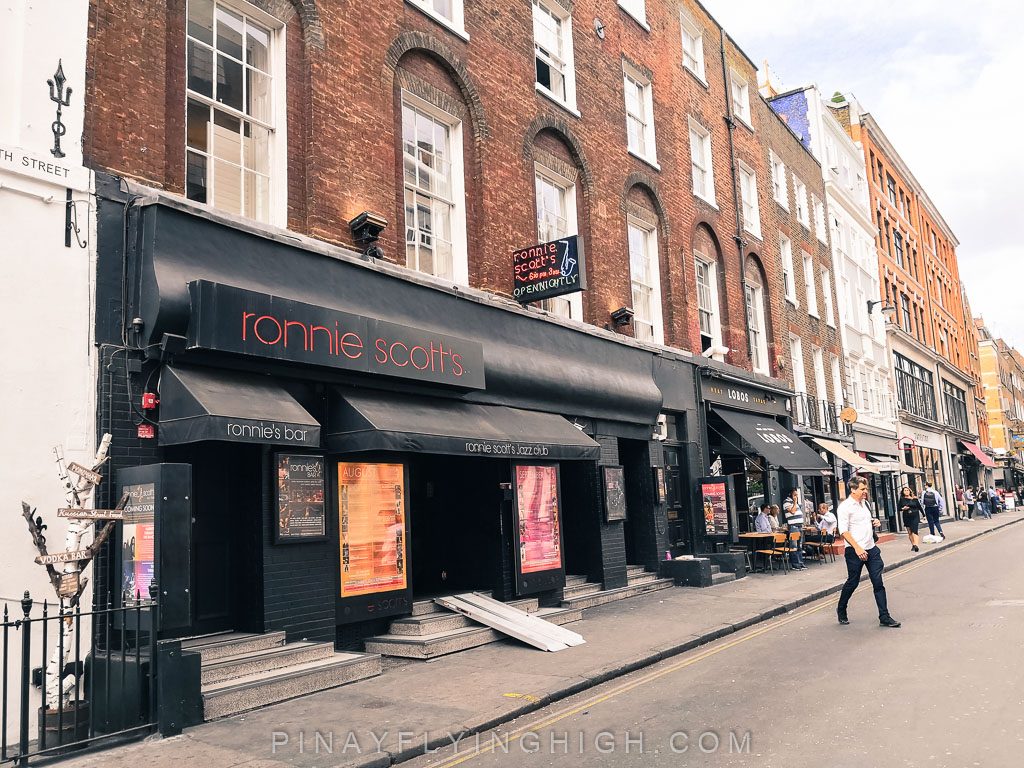 Nearby is a building with a blue plaque indicating the site of the house where Wolfgang Amadeus Mozart used to live in the mid-16th century. As a musical child prodigy who was already well-known throughout Europe, Mozart together with his father and talented sister moved to London and entertained visitors in private for a fee. 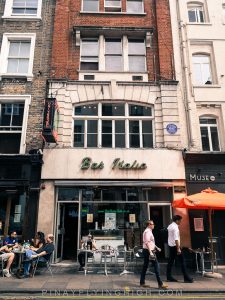 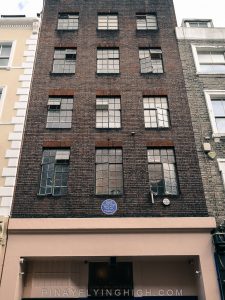 I ended my walk at Berwick St Market which I haven’t been to before and didn’t realize that such a market exist in the middle of Soho. I tried to find the exact place where the cover for Oasis’ What’s The Story Morning Glory was shot but couldn’t seem to find it. I definitely did look like a lunatic looking down at my phone and looking up again to see if any of the buildings of the street where I was look like the cover photo of the album. I stopped looking for it when a few people grunted at me for blocking their way. :p

London’s Hidden Walk is seriously a great purchase if you like walking around London and exploring its sights and learning more about its history. If you want to buy all three series, it costs £17.28 but you can also just buy the Volume 2 of the series where the Soho walk is featured for £10.00. You may click on the images below if you wish to buy it.

PrevPreviousHuffing and Puffing in Preveli Beach on Our Last Day in Crete.
NextGlorious Seafood Meal At The Whitstable Oyster Company, Definitely Worth The DriveNext