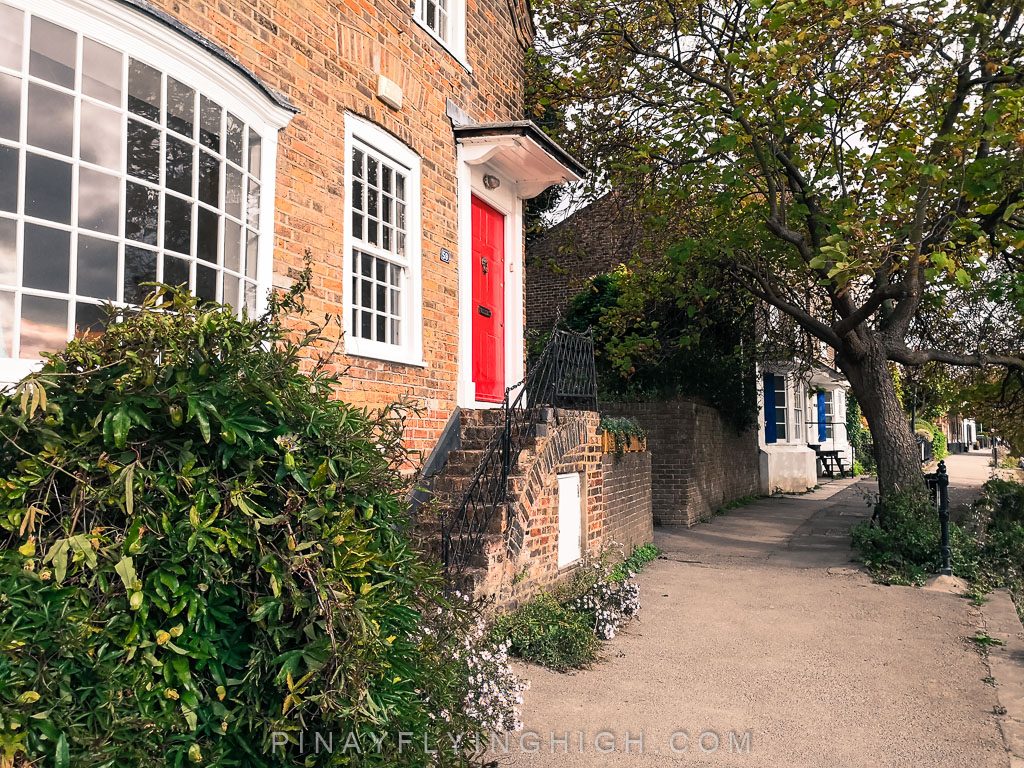 The Hammersmith and Chiswick walk is by the far the most interesting and the prettiest walking tour I’ve done guided by my London’s Hidden Walks book. Apart from the pretty lanes and expensive houses that I passed by in this route, I was most interested in all the riverside pubs that I saw. There were too many and all of them had an amazing view of the Thames River. Upon seeing the photos I took, The Greek Mister was immediately convinced to do this walk with me next time. 🙂 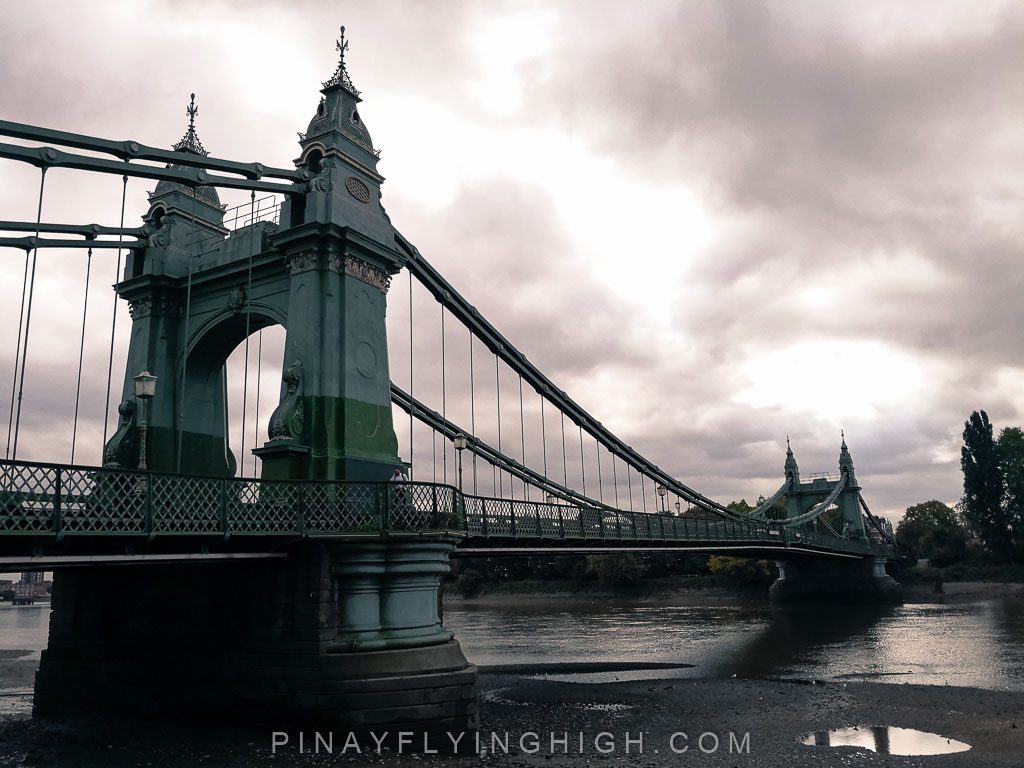 I started the walk from the Hammersmith Bridge, I turned right towards the Lower Mall which is an area famous for its numerous sailing clubs and pubs. We’ve been here a couple of times before, hanging out at either the Rutland Arms or The Blue Anchor. It can get really crowded here specially during summer with everyone trying to catch some rays of the sun in a place that serves beer with a good view. The Blue Anchor was used as a film setting for the 1998 classic – Sliding Doors, this is where Gwyneth Paltrow and John Hannah had a drink. 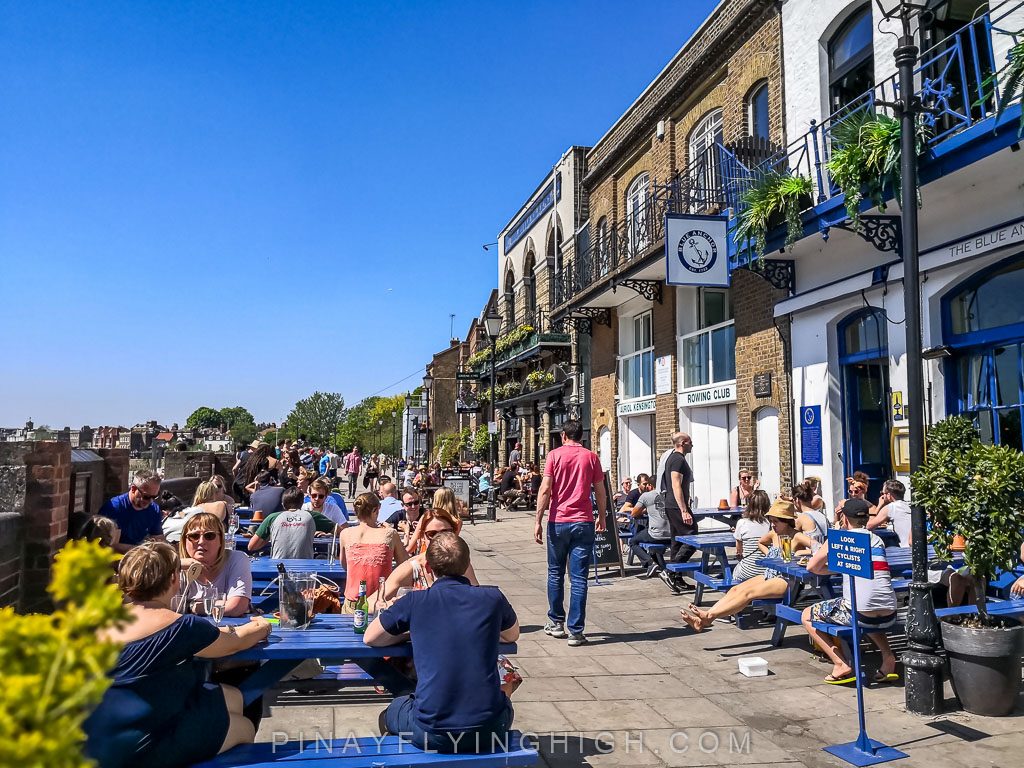 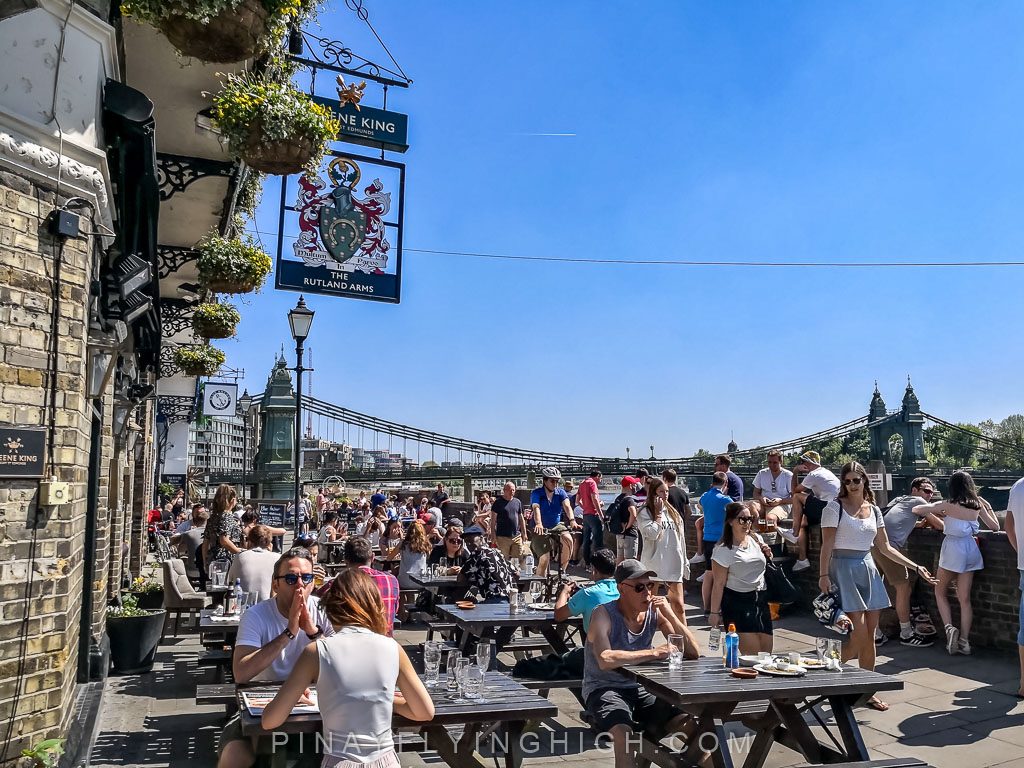 I continued on walking towards the Furnivall Gardens which was named after a remarkable man who helped establish the Oxford English Dictionary. At the end of the garden is a small alleyway that passes through another iconic riverside pub, The Dove. The Grade II listed building dates back to the 17th century and is known to welcome famous people as their “regulars” including Ernest Hemingway. Inside you can find the smallest bar room in the world and it also boasts one of the best views of the River Thames from their outdoor seating area. 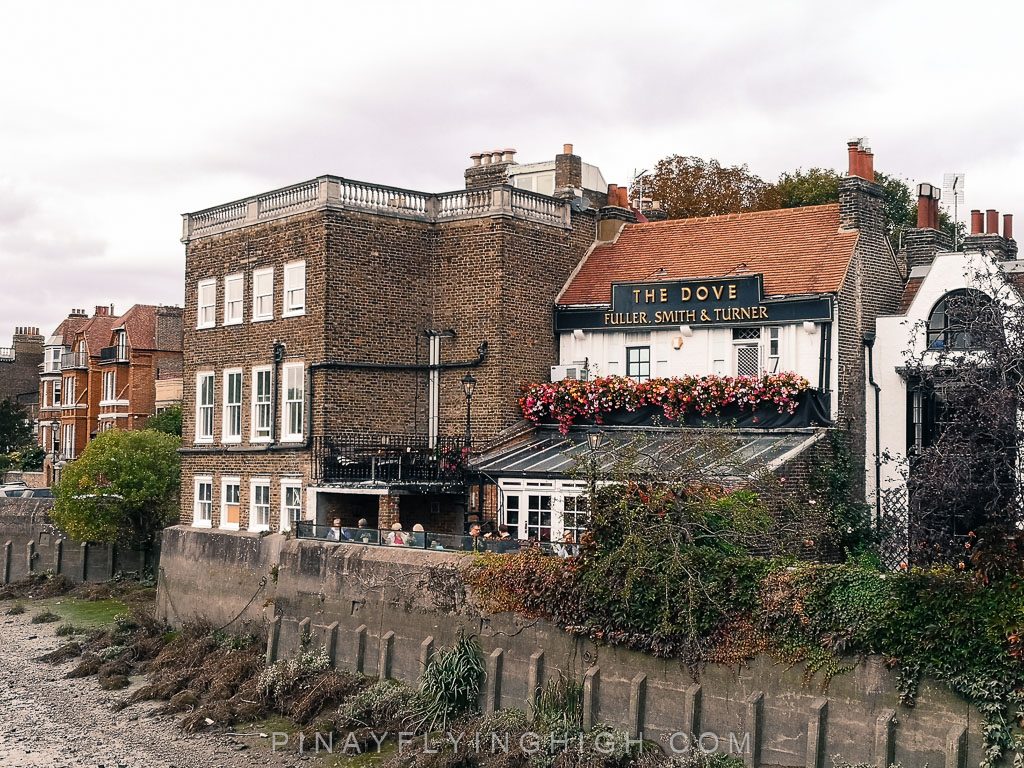 Up ahead, there’s the Old Ship – another riverside pub in this route. The building dates back from the 17th century but now looks quite modern with its renovated interior design. They also have a spacious balcony area which looks like it’s heated, I’m definitely noting this down for when it’s too cold to sit outside which I think is happening soon. 🙂 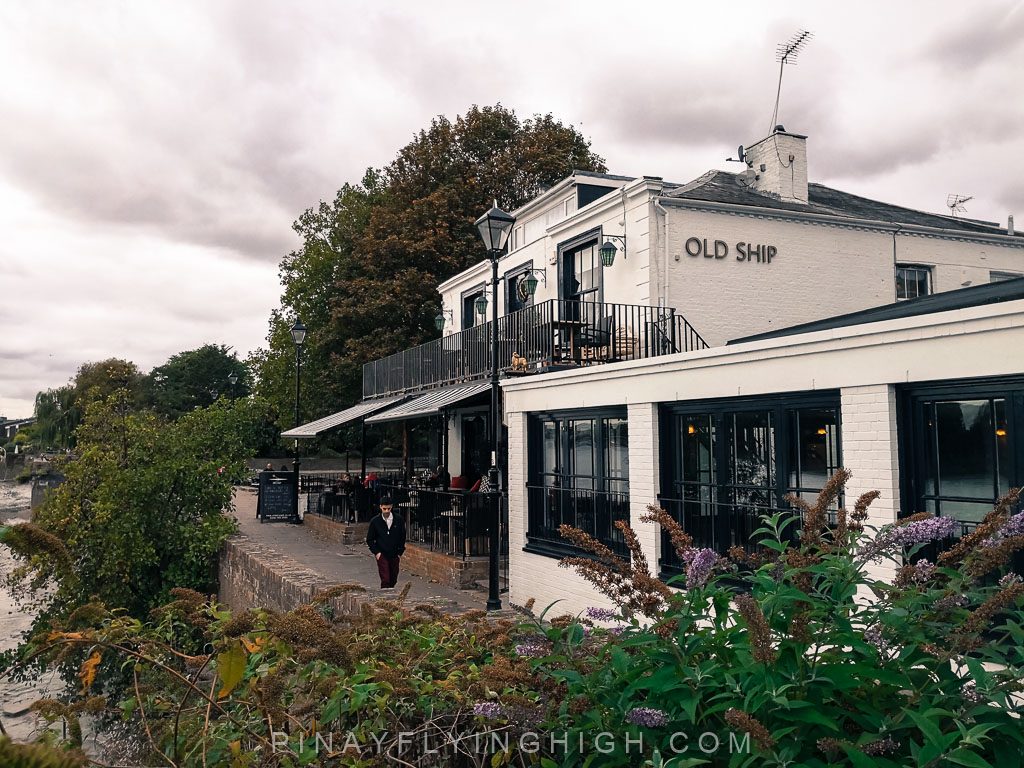 Next stop is yet another pub, The Black Lion – although it’s not riverside it’s still very pretty and worth a visit. It’s a Grade II listed building which dates back from the 18th century. It’s well-known to be a haunted pub but the origin of its haunting is quite ironic. Apparently, there’s a ghost sightings around the Hammersmith area and a guy named Francis Smith decided that he will deal with it once and for all one night after a drinking spree. When an unsuspecting bricklayer named James Millwood passed by wearing all-white, Smith shot him thinking that he was the ghost. Now Millwood’s ghost is said to be the one haunting the Black Lion pub. :p 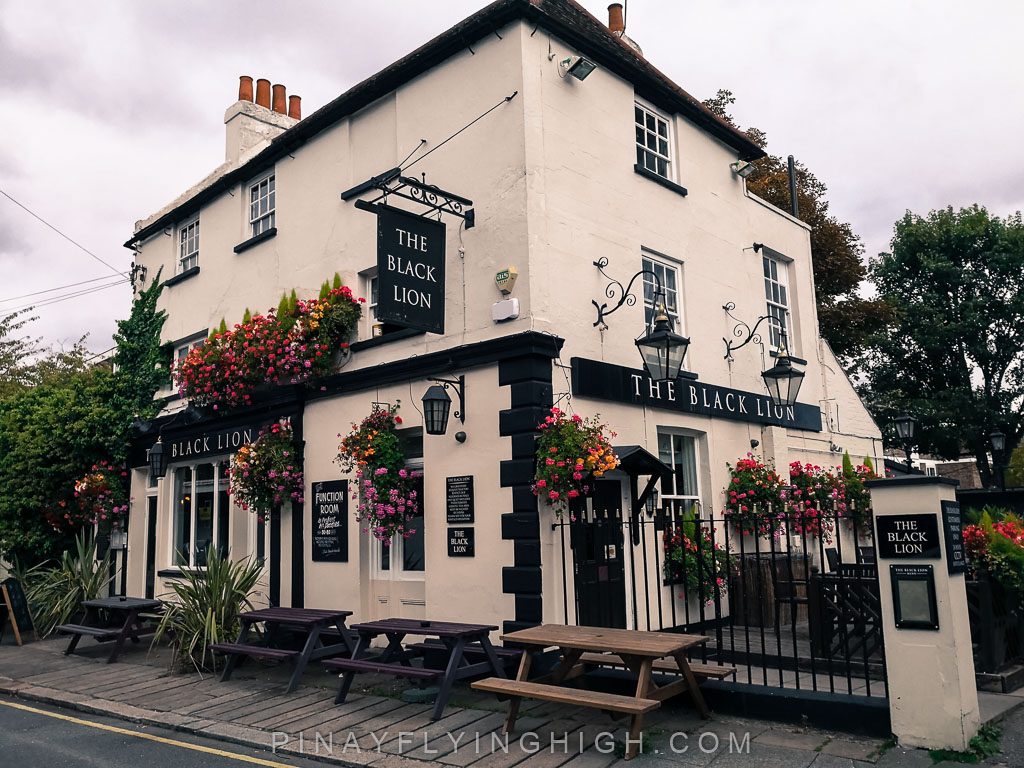 I continued on towards Chiswick Mall, the area’s most expensive address where houses can sell for over £10M. The area became a favoured location for the rich people of London because of its proximity to the Royal Palace at Kew. You can actually feel the richness of this area, leafy suburb with a very village feel to it. It felt like I was no longer in the city of London when I was walking through here. 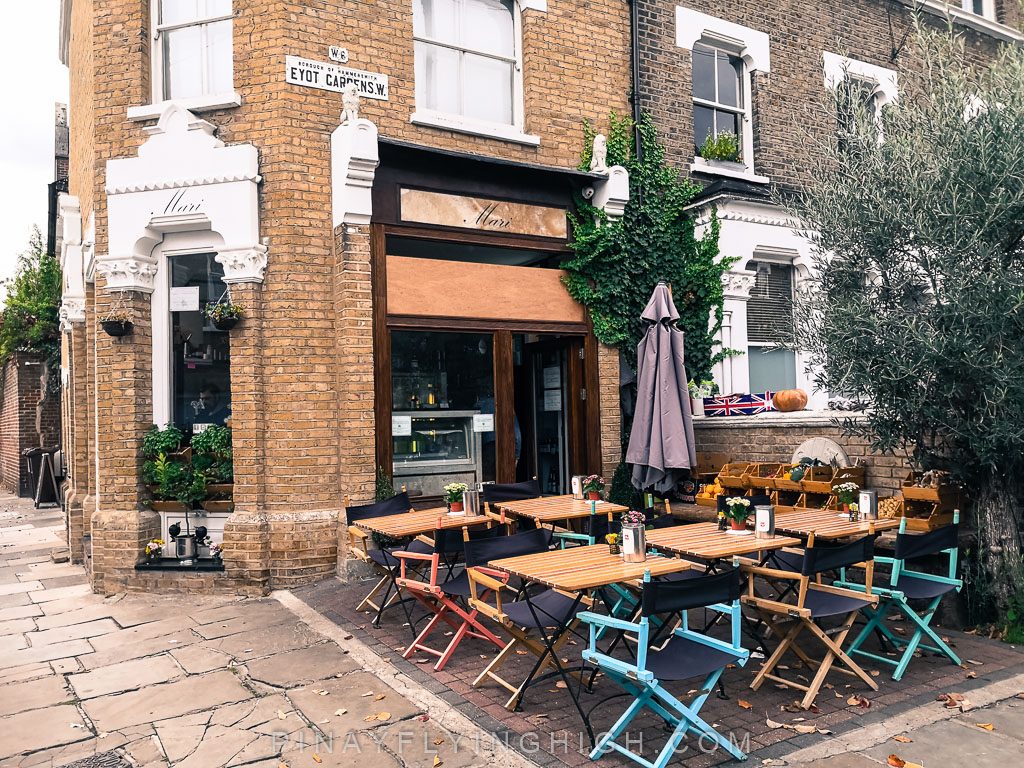 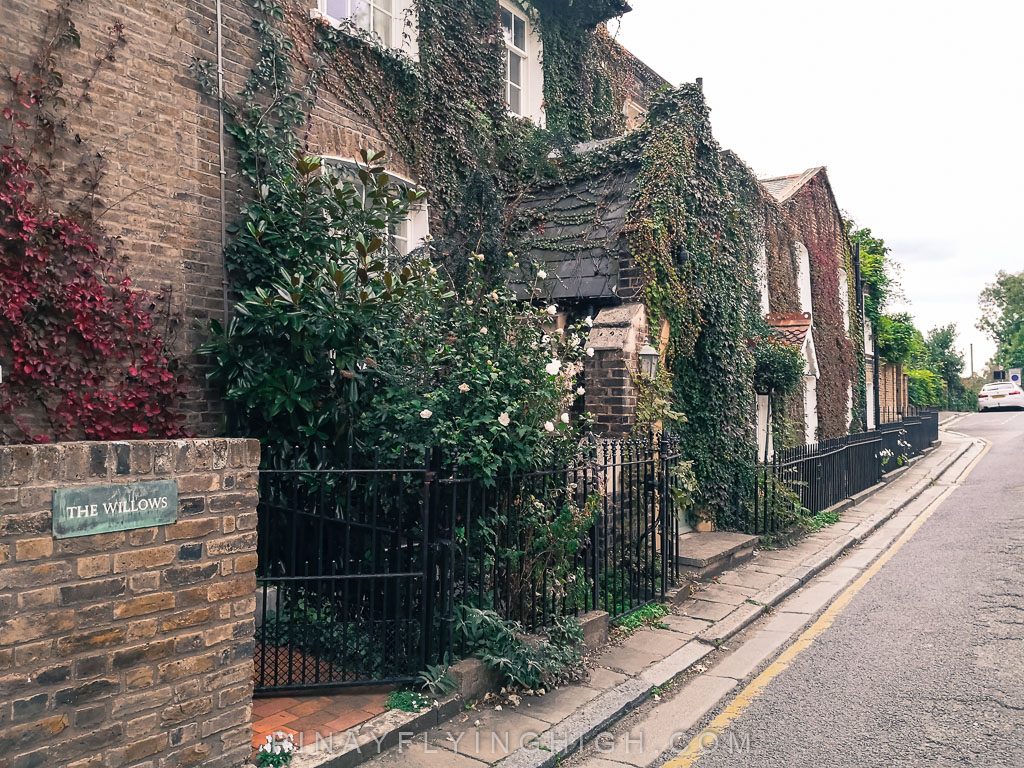 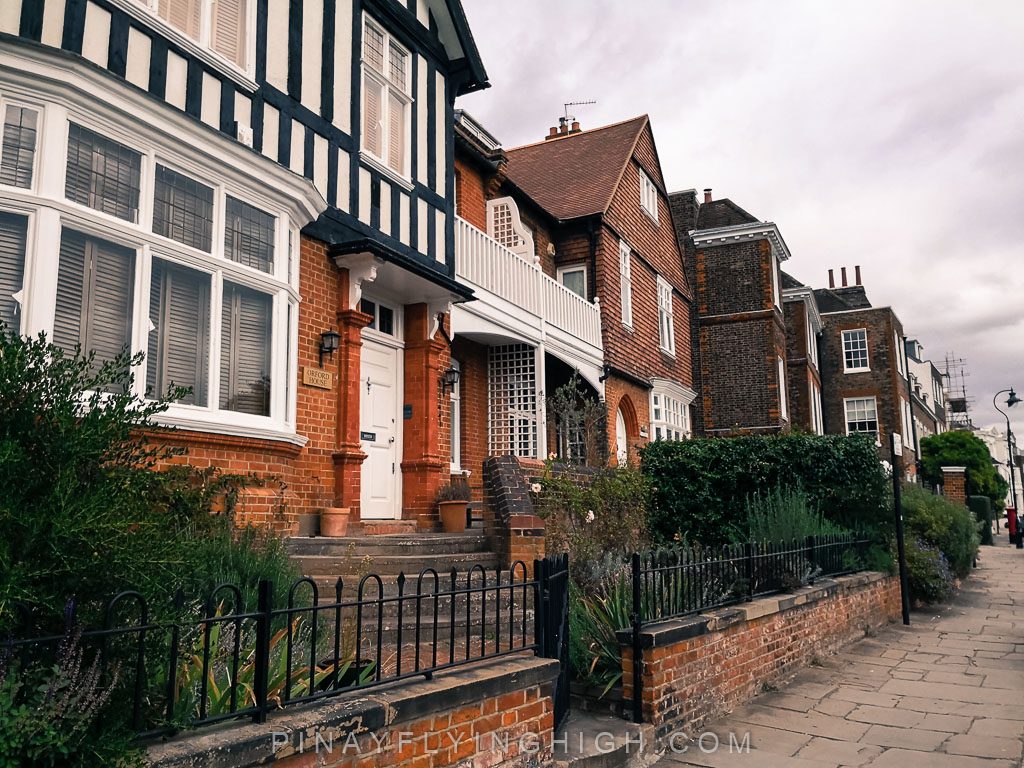 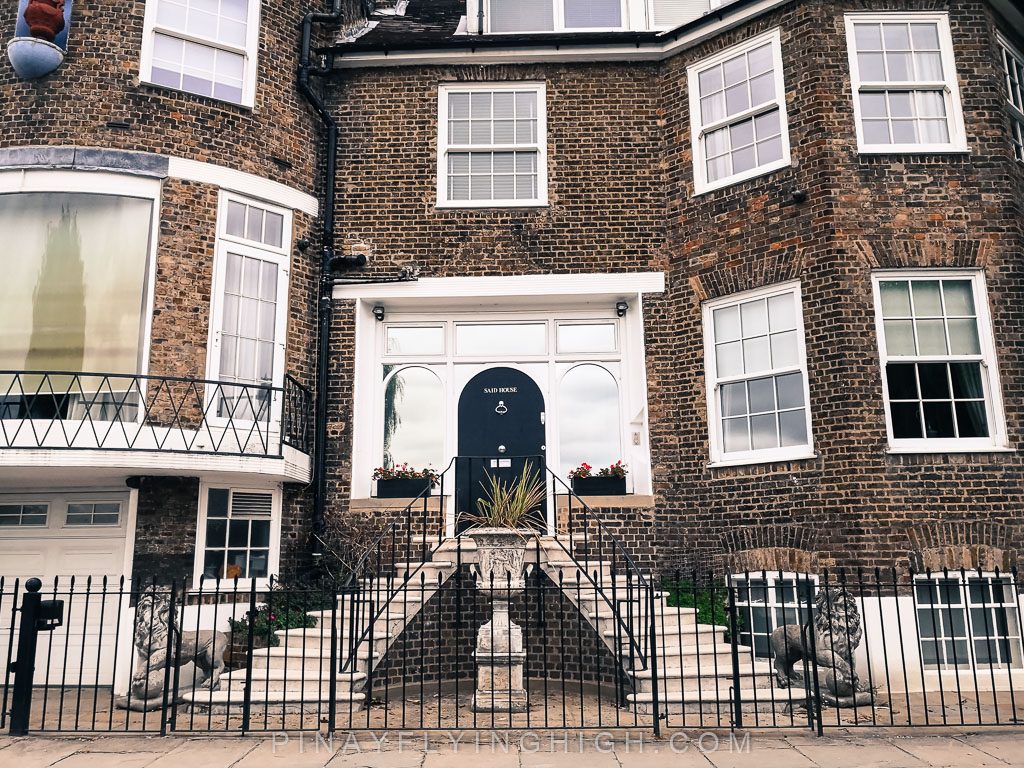 Just opposite the church of St Nicholas is the Old Burlington which is believed to be the oldest building in the area which dates back to the 16th century. It’s now converted into apartments which retains many of its original features including exposed oak beams. It would be interesting to see the interior of the apartments but I definitely won’t live there. Once again, it’s believed to be haunted by a ghost whose MO is to rearrange photos. Lol. That’s scary enough for me so no, thank you. 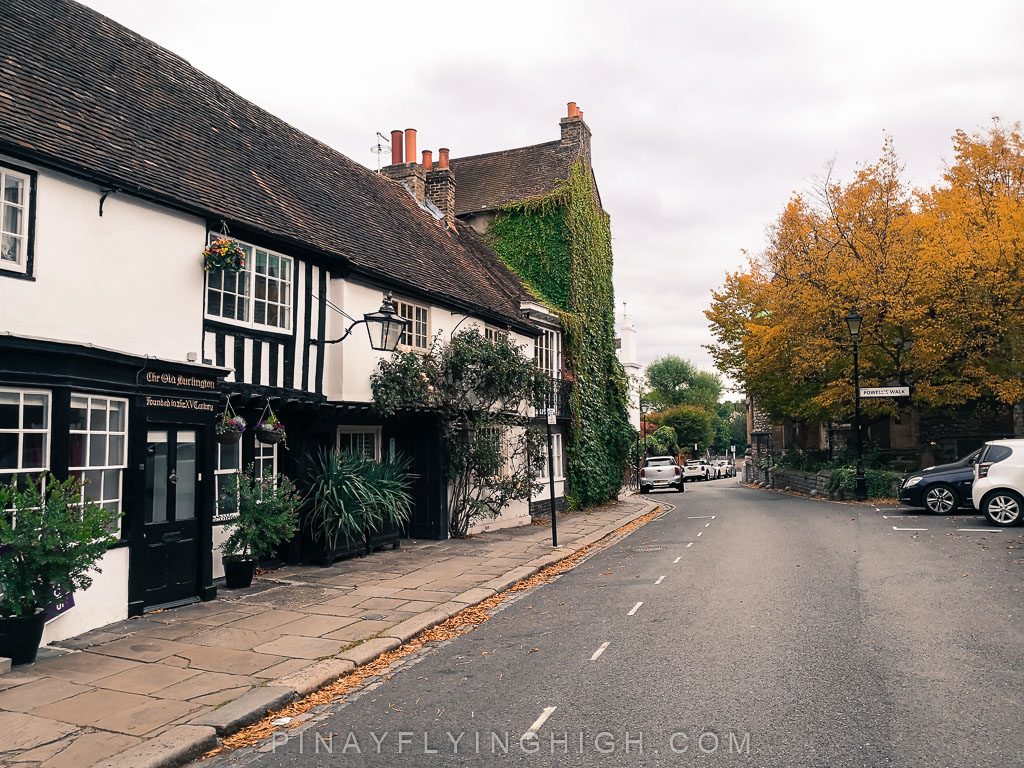 I went over to Chiswick House next but as I wasn’t very interested to see the house itself, I spent my time there exploring the grounds instead. Thankfully, the weather’s still good to walk around the pretty gardens and along the Serpentine Lake. I spent a good time here just walking around and sitting on of the benches in front of the lake. 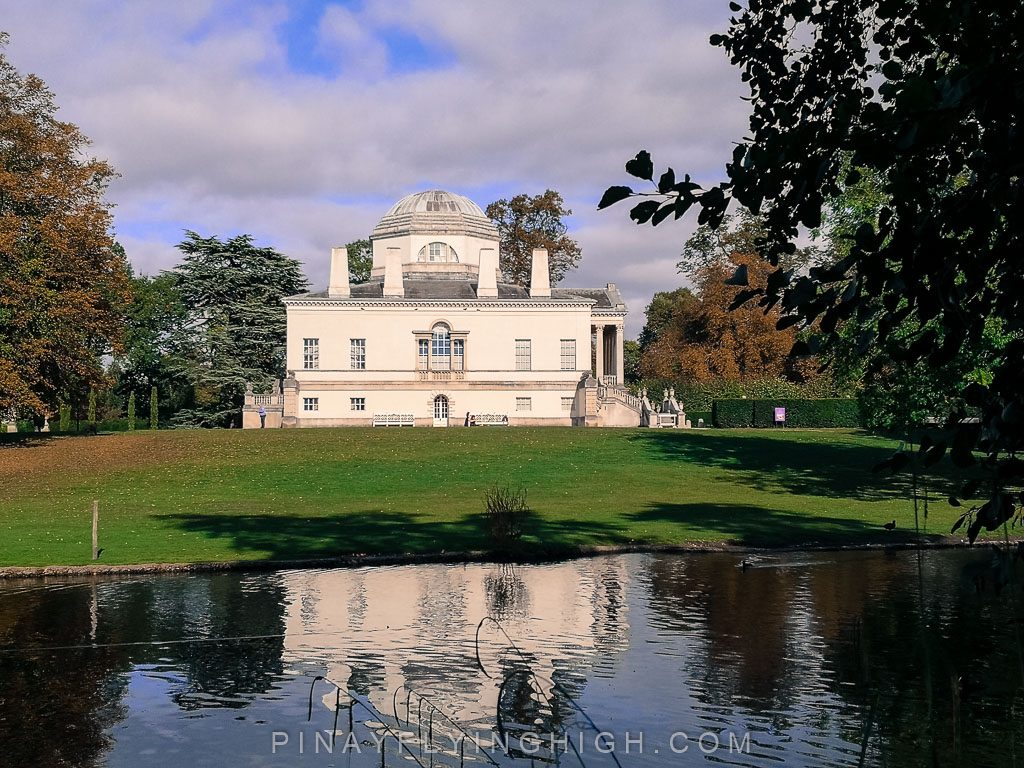 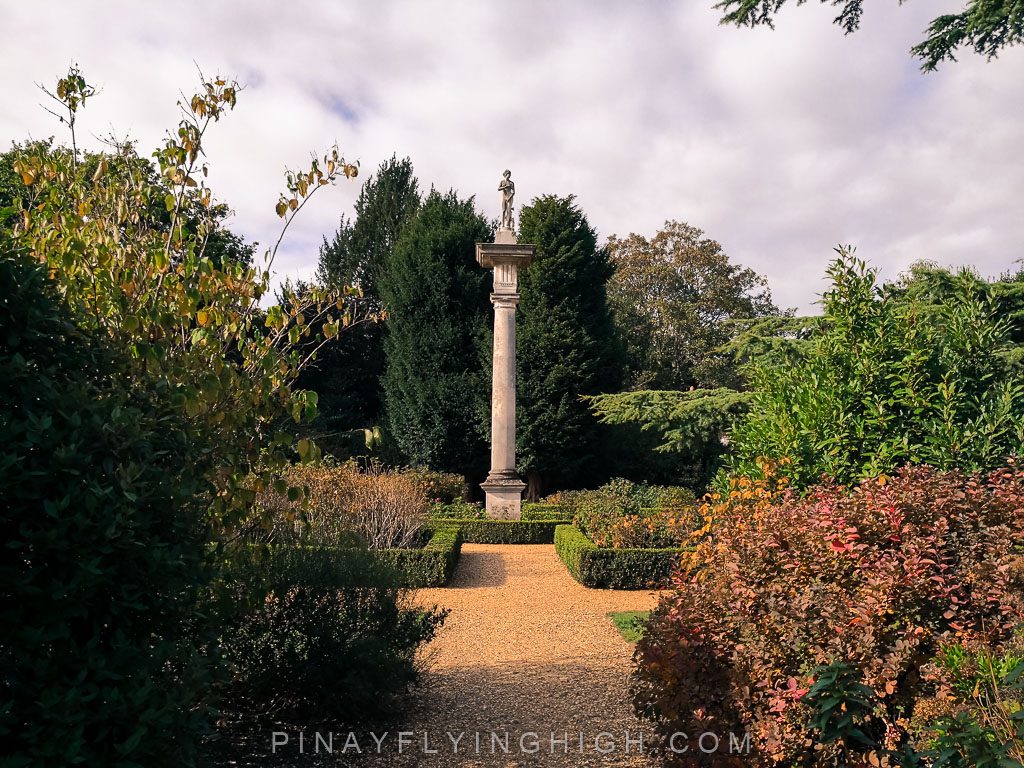 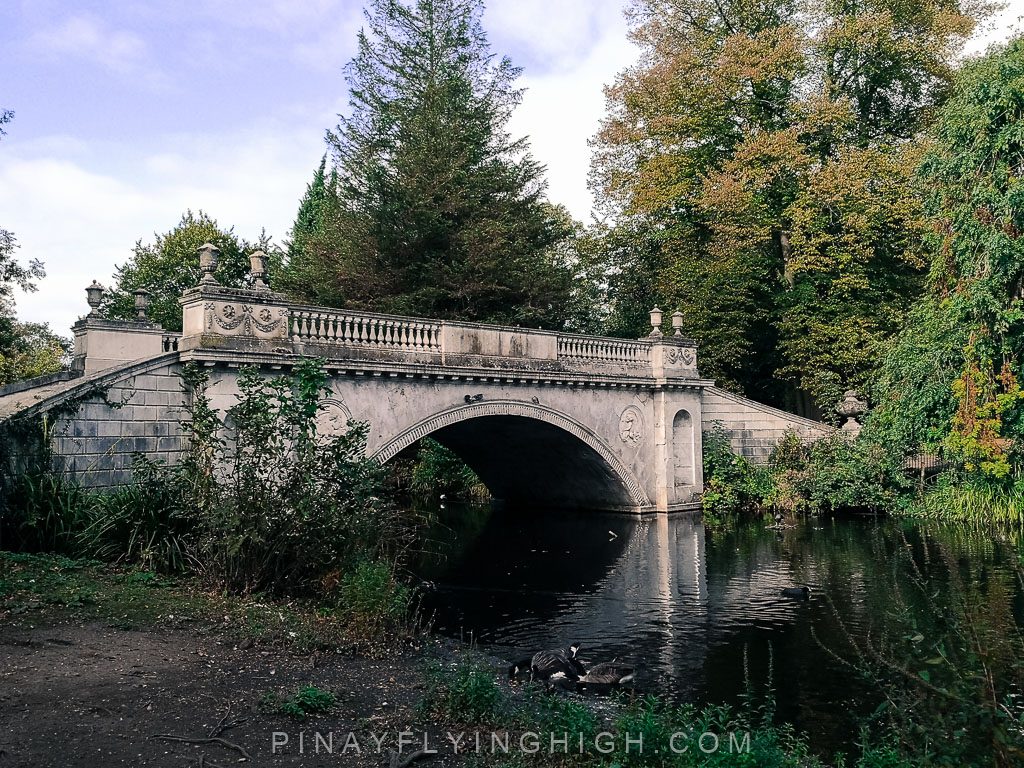 After that much-needed rest, I walked towards my favorite part in this walk – Strand-On-The-Green. It’s a quaint riverside village and one of the most picturesque areas of London, no doubt about it. This part of Thames is still tidal and the water can rise or fall by 7 metres, most of the houses along this path had some sort of a special door to protect them from flooding while some houses had miniature elevated doors instead. While flooding is no longer that common after the opening of Thames Barrier, the residents kept all these special anti-flood devices of their homes probably as a “just-in-case”. 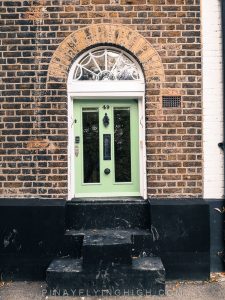 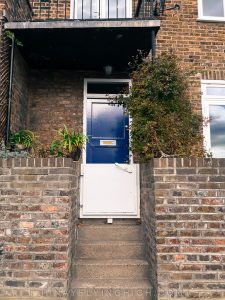 It’s also a pub aficionado heaven with not one but three riverside pubs that will definitely make you want to have a pint or two. The first one’s The Bull’s Head which is located very near to the Kew Railway Bridge which carries the District Line and London Overground. 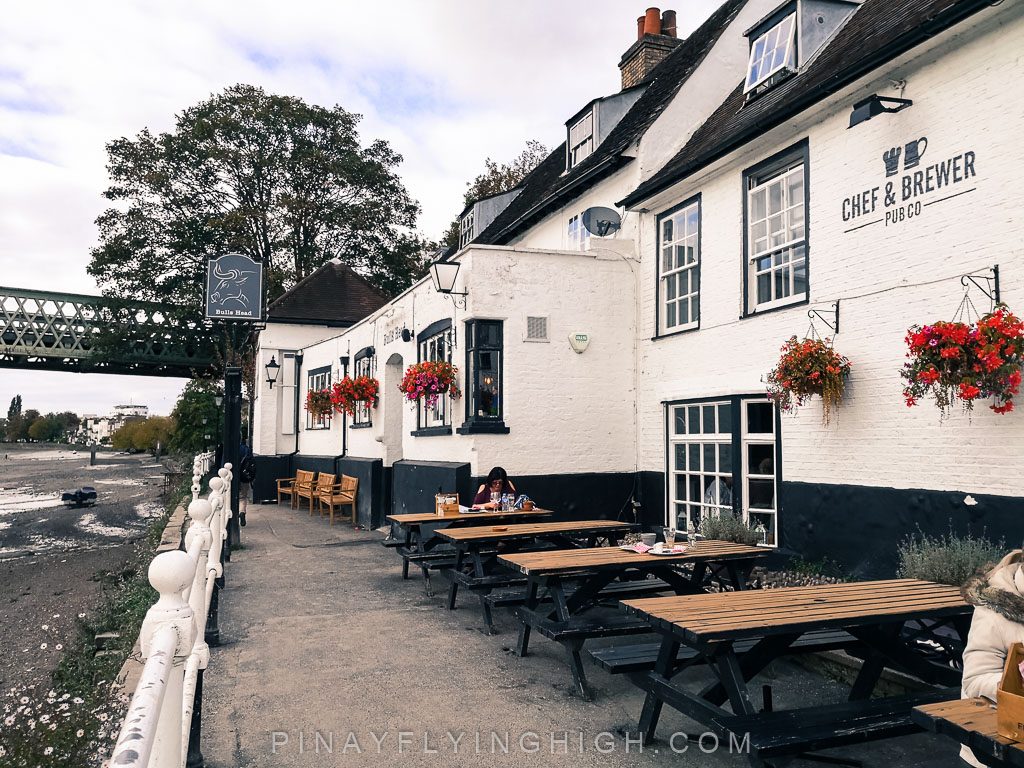 Next is The City Barge, a historic pub which dates back from the 14th century. It went through an extensive refurbishment but was able to keep some of the original architectural details and period fixtures. It was used in the Beatles movie Help! released in 1965. 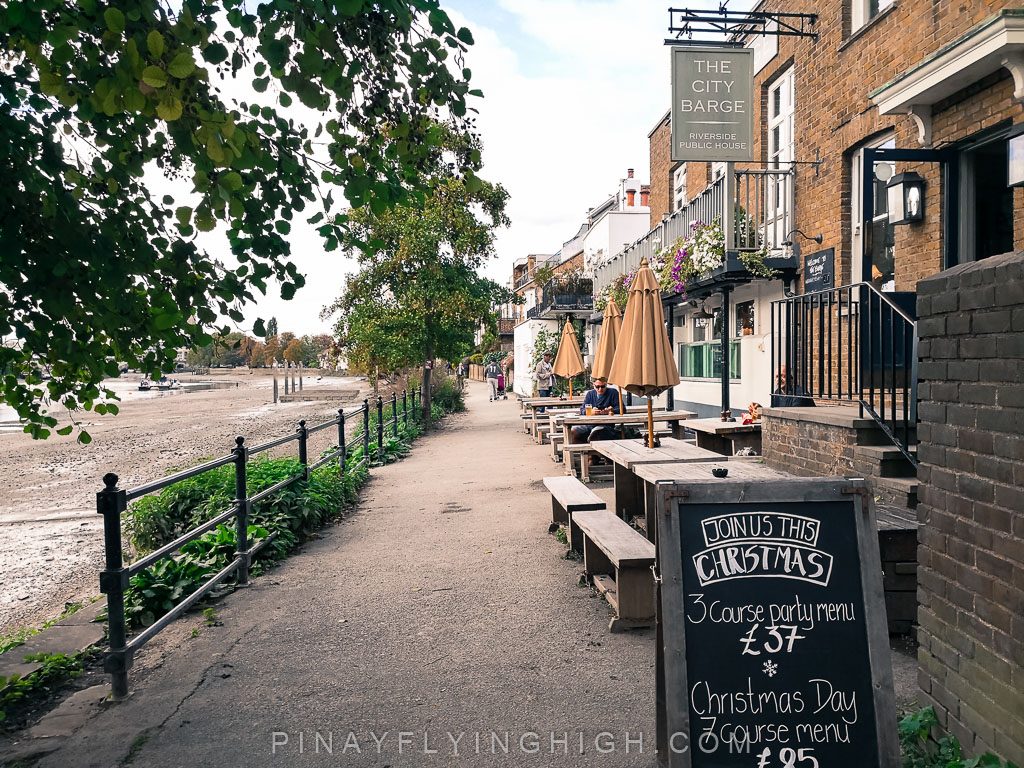 Last but not the least is the Bell and Crown which I think has the prettiest outdoor seating area with the view of the Kew Bridge in the horizon. I had a coffee here to end my long walk and thought to myself why I didn’t do this walk during summer, we could’ve gone here multiple times for a pint if I’ve done it earlier. 🙂 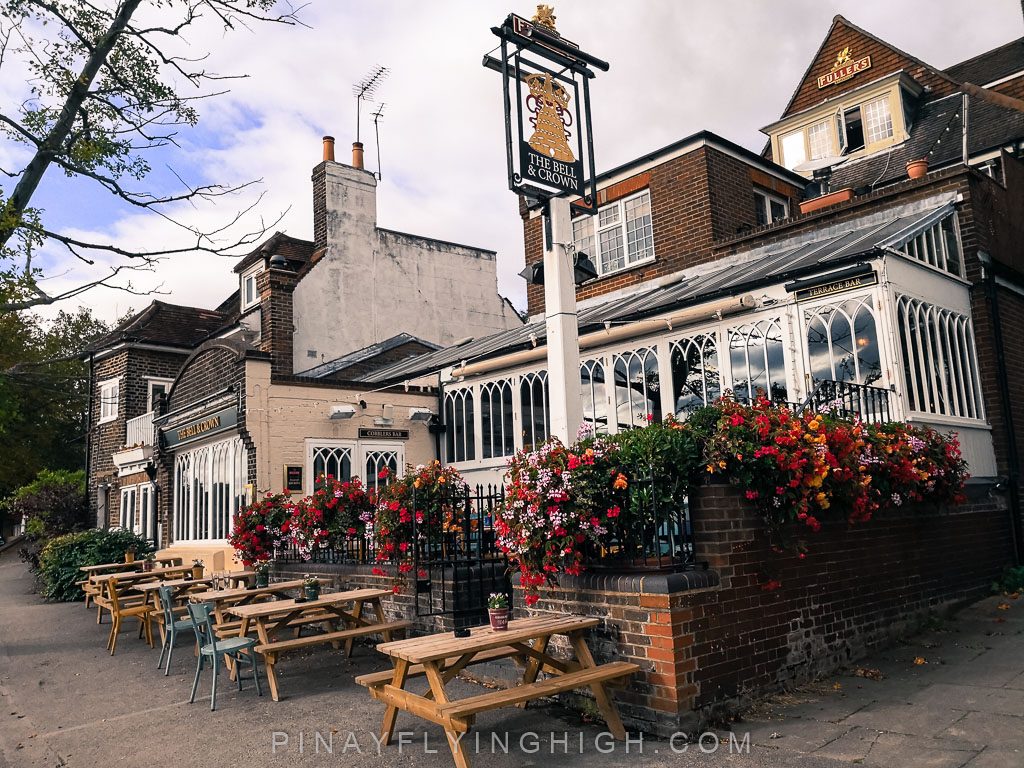 This is definitely the most productive walk I’ve ever done guided by the London’s Hidden Walks book. London’s Hidden Walk is seriously a great purchase if you like walking around London and exploring its sights and learning more about its history. If you want to buy all three series, it costs £17.28 but you can also just buy the Volume 3 of the series where the Soho walk is featured for £10.00. You may click on the images below if you wish to buy it. 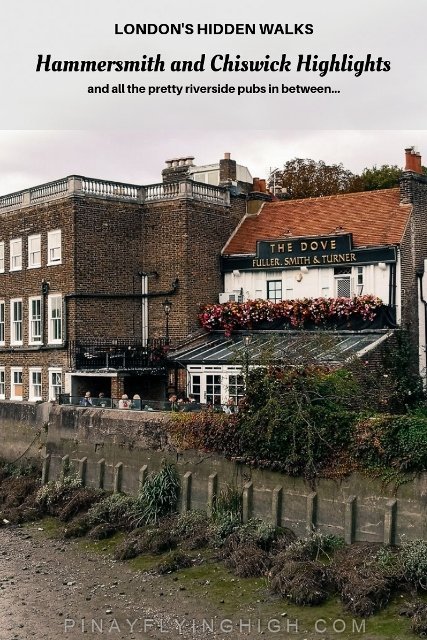