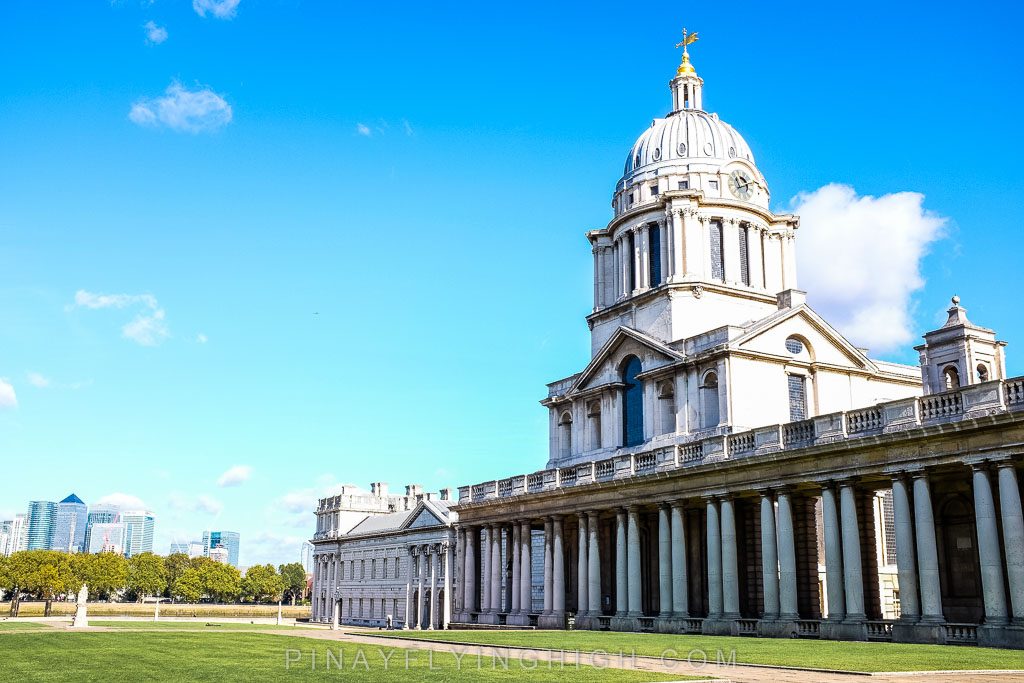 Greenwich is one my favorite boroughs in London, there’s something about the wide open spaces and the beautiful architecture of the buildings around Greenwich which I find so charming. As I’ve mentioned before, I’m definitely not a city girl which made the small town look of Greenwich so endearing for me.

I’ve been meaning to do a Greenwich day trip itinerary for quite a long time now but it was only last week that I was finally able to complete my Greenwich bucket list. It took me 5 visits to this place to complete it as it’s just impossible for me to do it all in one day. I always end up staying in a particular site or place longer than I’m supposed to since there’s always something to distract me – be it an informative museum, a great view or cute little shops selling handmade products. By the time I am reminded that I’ve lost track of time once again, it’s time for me to go home to avoid the rush hour of London. If like me you’re easily distracted by all things beautiful, then I’m afraid to say that you’ll require 5 visits to Greenwich to complete this list. 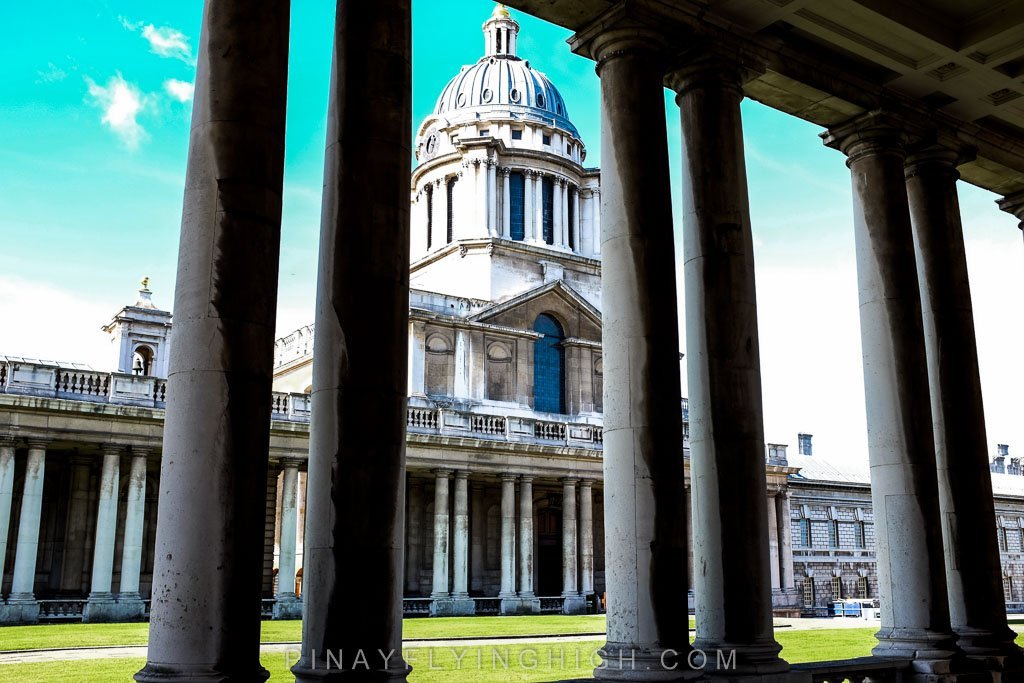 Call me silly but I didn’t realize that Greenwich is actually in London until I moved here. I thought that it’s somewhere really secluded which will require for me to spend hours on end in a train to get to. Living in South West of London, I do spend an hour and a few minutes to get to Greenwich but it’s not as tiring for me as I know that I’m still in London. I have a very playful mind, so to speak. 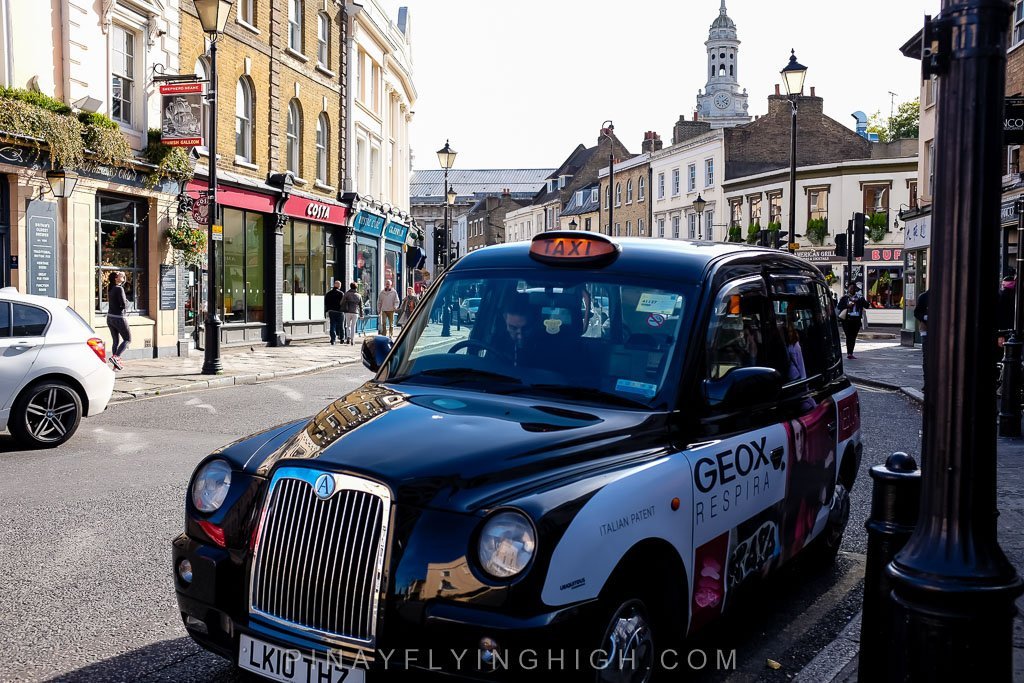 So what can you do in Greenwich? A lot! I’ve listed down all my favourites below and based on an itinerary if you’re going to take the DLR train to get to Cutty Sark station. 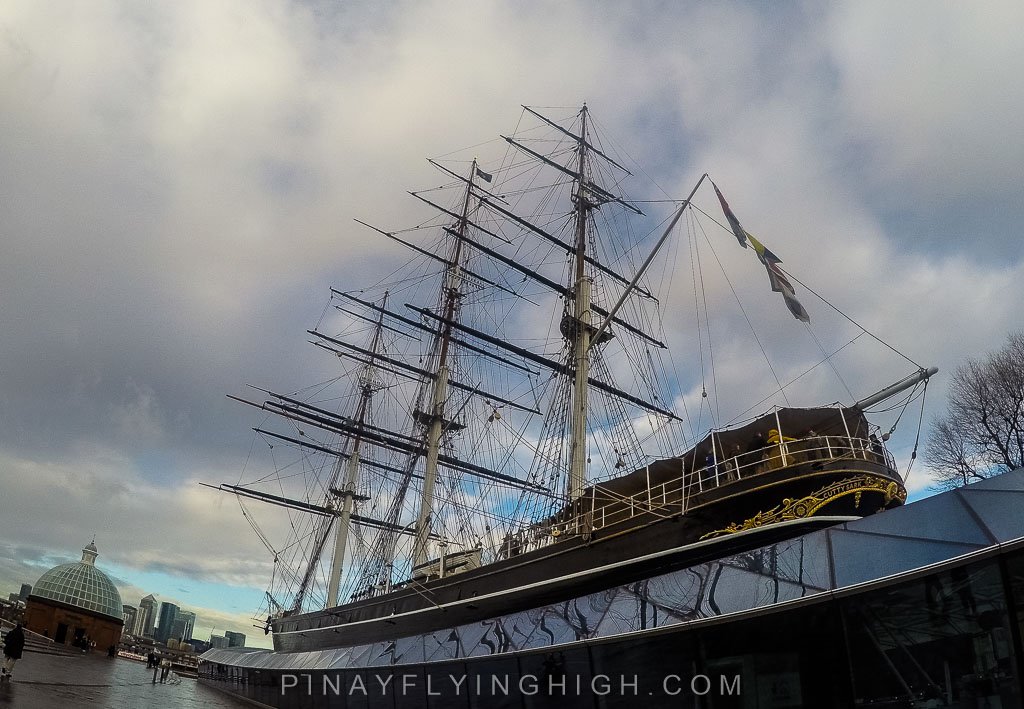 First order of business is the Cutty Sark, you can’t miss it if you’re taking the DLR as it’s immediately on your left as soon as you get out of the station. Cutty Sark is a British clipper known to be one of the fastest ships in the world during its time. It was used during the tea trade in China and afterwards, wool trade from Australia. They conduct a complimentary tour twice daily, but the timings do change. So I suggest that you go upto the information counter of Cutty Sark and ask for the complimentary tour timings.

The ship itself is very interactive but I have to admit, I found it a bit too geared towards small children (not that I didn’t enjoy opening and playing with things onboard the ship). If you’re traveling with children or you’re into maritime history, it’s definitely a good place to start your Greenwich day trip. 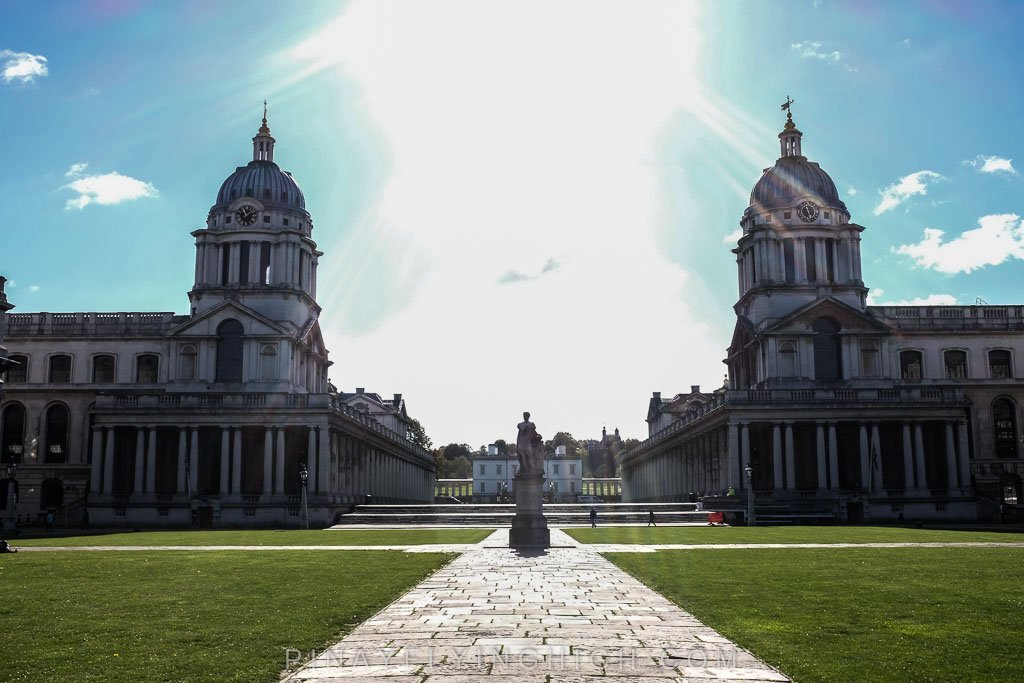 It’s nice to take a photo of Sir Christopher Wren’s masterpiece which is considered a World Heritage Site. It’s one of the prettiest buildings here in Greenwich and definitely a very instagrammable place. If you’re standing between the two buildings with your back towards the Thames River, you’ll find the Chapel of St Peter and St Paul on the left building which is worth a quick visit. A singer was rehearsing when I visited it so I had a free show when I was there. The building on your right is my favorite though as it houses the Painted Hall Ceiling which should be your next stop. 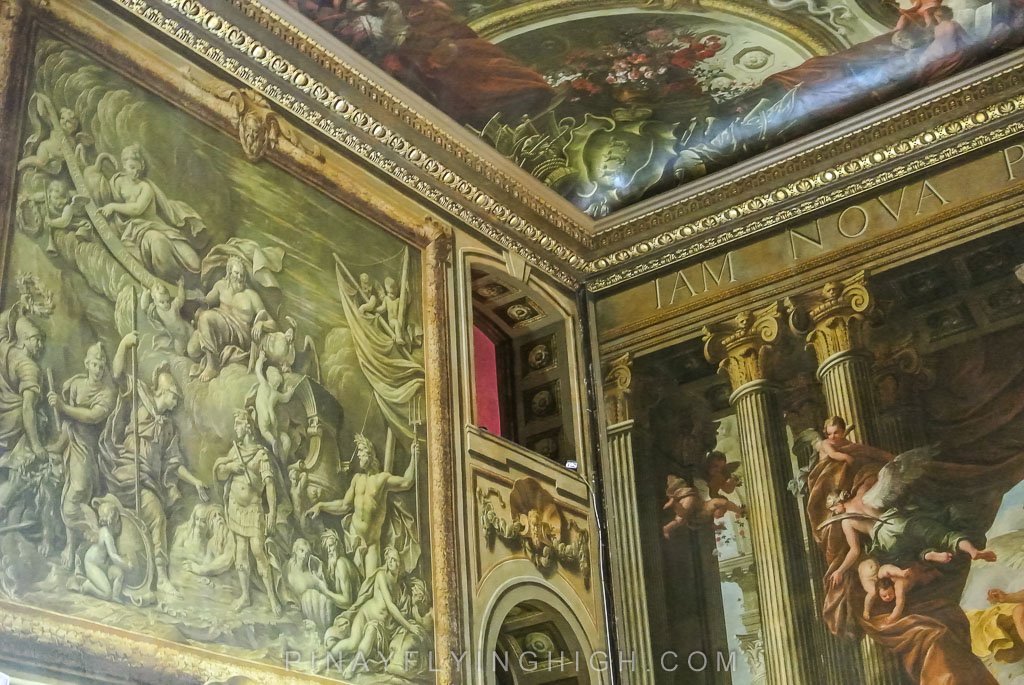 The Painted Hall considered as London’s Sistine Chapel is undergoing a two-year restoration but instead of closing it to the public, they’re offering ceiling tours which gives you a chance to stand on a (very safe) scaffolding with the ceiling at your arm’s reach (don’t reach out to it though). After the restoration, it will open once again to the public and you’ll only be able to enjoy it’s grandiosity from ground level (which I can’t wait to do as I haven’t seen it before from the ground).

Ticket price: £10 per adult and £5 per child.
Read more about my Painted Ceiling Tour Experience here. 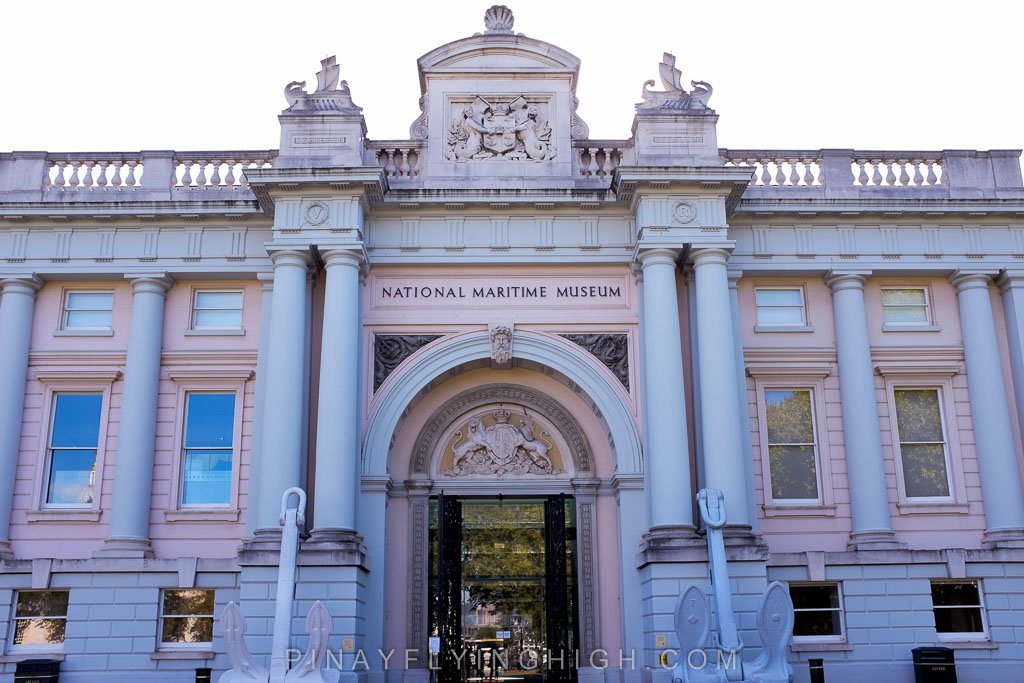 Across the road from the Old Royal Naval College is the National Maritime Museum, the largest museum of its kind in the world. Again, this is not for everyone and the museum was created to be interactive for kids as well. In fact, there were a lot of pre-schoolers around the museum doing an educational tour while I was there.

If you’re a bit of a geek like I am, you’d enjoy it. I love reading historical facts and the National Maritime Museum is rich of it. 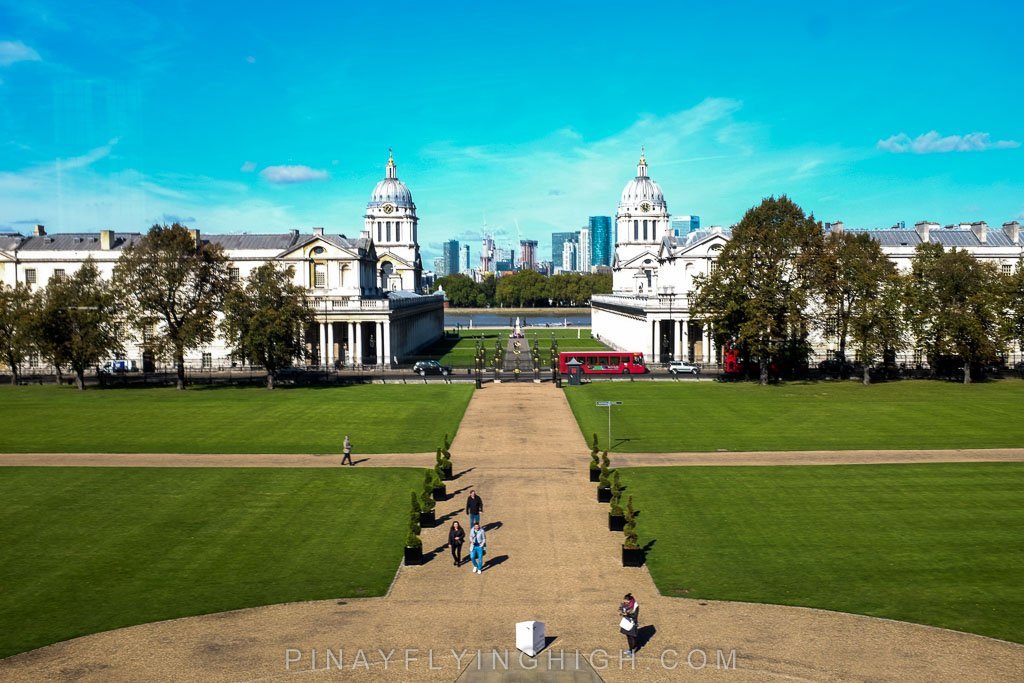 The building right next to National Maritime Museum is the Queen’s House, the first classical building in England with its architecture inspired by the architect’s travels to Italy. It was built for Queen Anne of Denmark who never got to see it as she died before the ground floor was completed. The Queen’s House also has a direct effect on why there’s a huge space between the two buildings of Old Royal Naval College as the Queen requested that they should not block the Thames view from the house itself.

To be absolutely and completely honest, I wasn’t a big fan of what was inside the house itself but I did love the famous Tulip stairs. 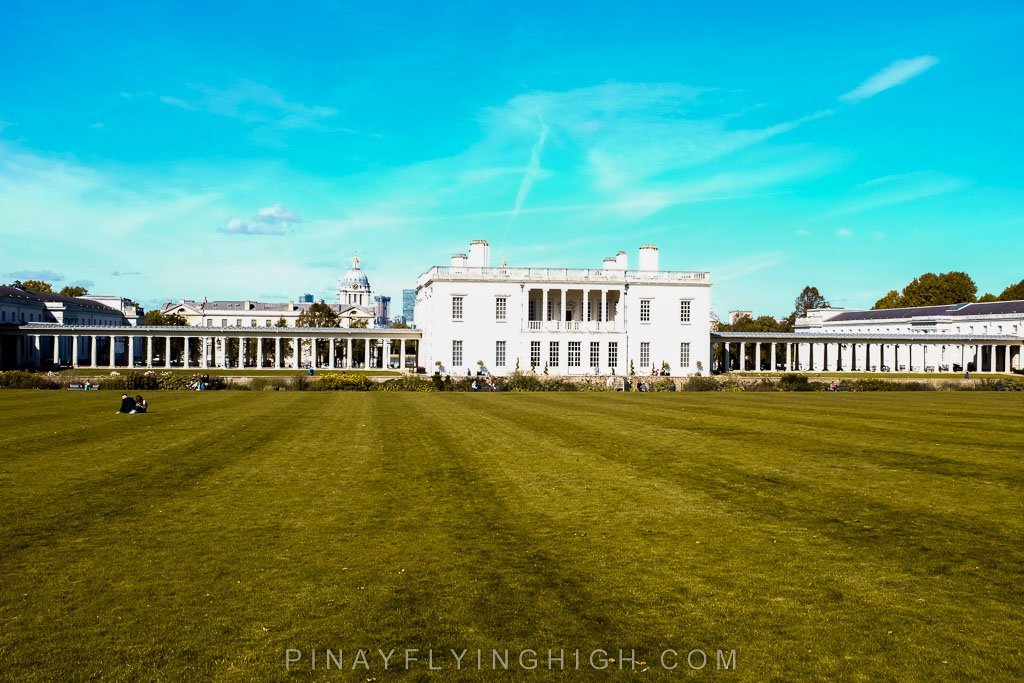 Right behind the Queen’s House is the lovely Greenwich Park. I loved the wide open space of this area! It’s one of the 8 Royal Parks in London and covers a staggering 183 acres and it’s also part of the World Heritage Site in Greenwich Maritime. I quite enjoyed sitting on one of the benches from the Queen’s House while sipping on a coffee that I bought from the nearby Pavilion Café. 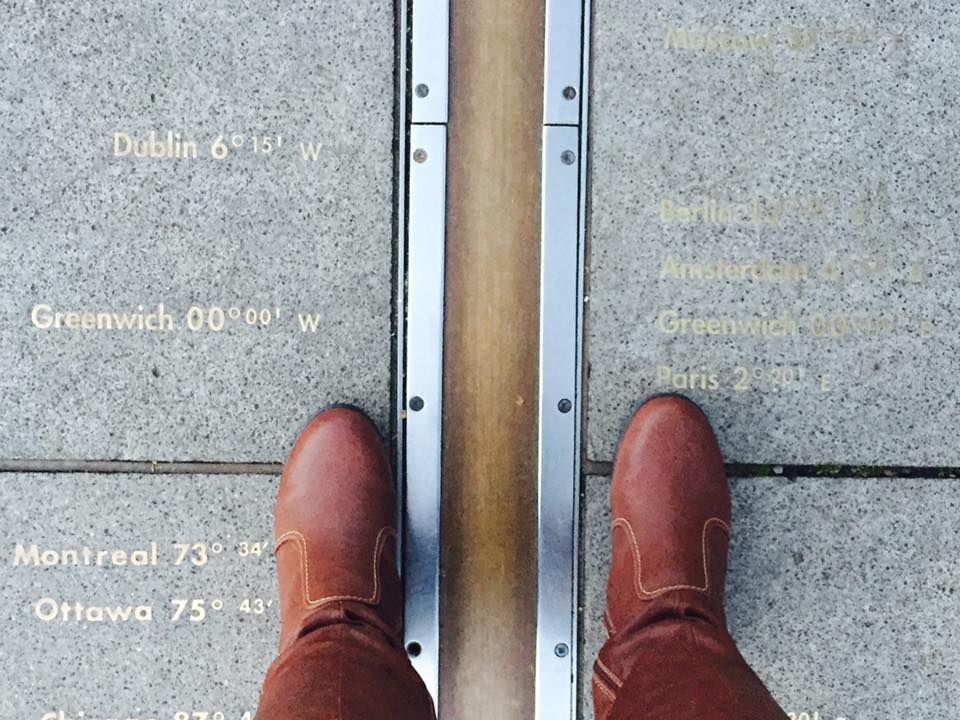 Once you’ve had enough of the beautiful view of Greenwich Park from below, go for a hike towards the Royal Observatory which is at the top of the park.

Head’s up! There’s a sappy story coming up. So when I was a kid, we’ve studied the Prime Meridian of course and never in my wildest dream did I think that I will one day stand on the Meridian line. When I stood there and realized what was going on, I actually had goose bumps. Who would’ve thought that a small town girl from the Philippines will one day travel the world and as far as I actually did? It was such a surreal experience really. Having said that, this is my favourite place in Greenwich.

Sappy story over. Apart from standing between the earth’s east and west hemisphere on the Meridian line, another one of the things that I loved doing in The Royal Observatory was the camera obscura. It gives you an eerie panoramic view of Queen Anne’s House from inside a darkened chamber. You have to wait for your eyes to adjust before you’re able to see it (The Greek Mister never did) but once you see it, it’s both fascinating and quite eerie at the same time. I told you my mind is very playful.

From the Royal Observatory, you’ll also get an amazing view of the Greenwich Park, the Queen’s House and the rest of the city of London. My camera’s not that great so here’s just a photo of The Greek Mister and myself blocking the view that I’ve just mentioned. 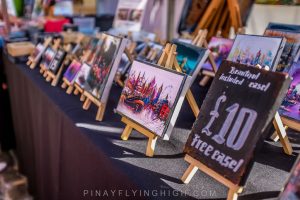 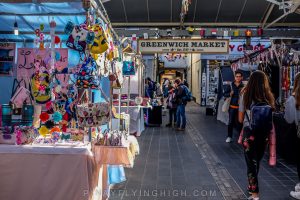 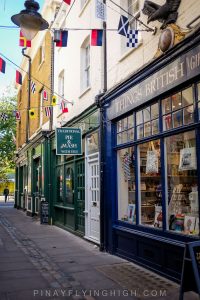 After taking photos of your feet standing on the prime meridian line in the Royal Observatory, head back down and walk towards the Greenwich Market. You’ll find unique handmade products, antiques and gift ideas. There are also some food stalls. It’s quite small but the things you’ll find are quite unique.

Those are the main attractions of Greenwich that you must visit (according to myself) but apart from that, there are a lot more things to do. Here’s some of it:

Up at the O2 – if you’re up for adventure why not climb the O2? The experience lasts for 90 minutes and involves climbing 380m long walkway 52m above ground level. The reward is a spectacular view of London and of course, bragging rights. You can’t make me climb though even if you pay me, I’m afraid of heights. :p

The Fan Museum – a museum dedicated to the history of hand-held fans. Fans denote social status and a fashionable piece to add to your ensemble so it’s only right that a museum is dedicated for it. The museum has a comprehensive collection which dates back from the 12th century. 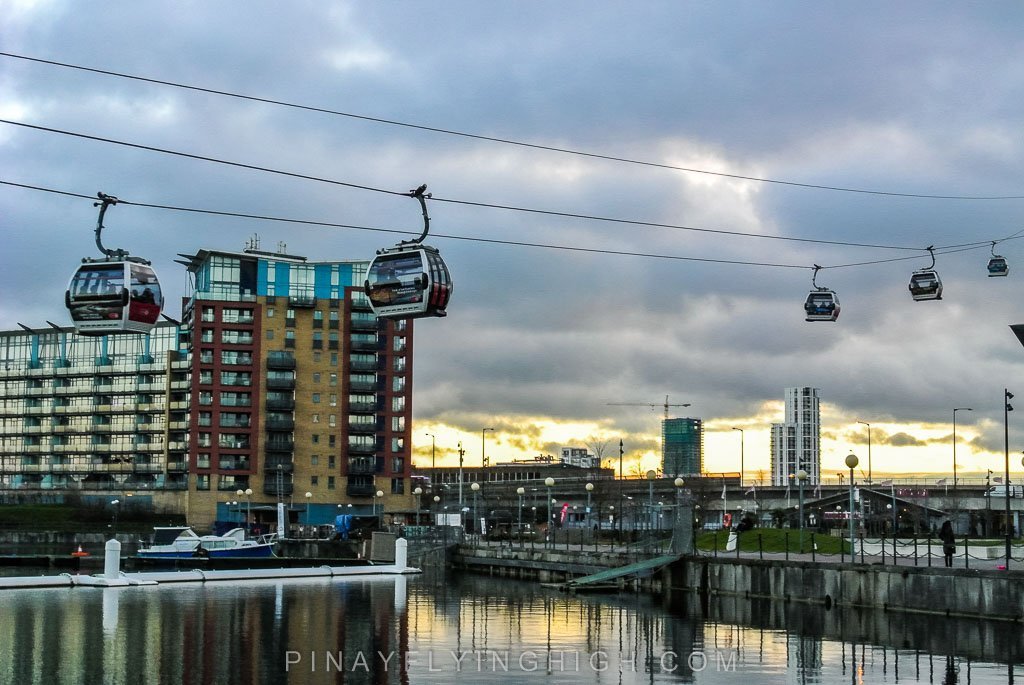 Emirates Air Line – a cable car journey which takes you over the River Thames. If you ask for my personal opinion, it’s not worth it as the view you get from there is not at all dramatic but it sure is a great alternative way to travel. I think the Thames Clipper is a much better way of unique traveling to and from Greenwich though.

Greenwich Foot Tunnel – another unique way of getting to and from Greenwich is by taking the tunnel under the River Thames. Yes, under the river. It runs approximately 15 metres below the river linking Cutty Sark and Island Gardens. It’s quite creepy though specially if you’re claustrophobic like me. :p

Peter Harrison Planetarium – take a tour of the universe with commentary from real astronomers. The last time I’ve been in a planetarium was when I was in grade school during an educational trip. I can still remember how the whole show made me dizzy so I vowed to myself that I will never go to a planetarium again. :p

Emirates Aviation Experience – take a 30-minute flight simulator experience in an A380 or Boeing 777. You can even select an airport, time of day and weather conditions while you pilot the plane through take-off and landing.

How to get to Greenwich:

I like going to Greenwich by DLR (Docklands Light Railway) – it’s like a mini roller coaster. :p I take it from either Canary Wharf or Bank. There are a lot of ways to get to Greenwich and you’d be able to see the fastest and easiest way by downloading the Citymapper app. Seriously, that app is the best thing that has ever happened in London. You’ll be able to use it wherever you are in London and wherever you’re going within the city. 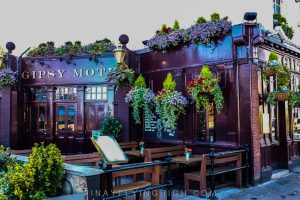 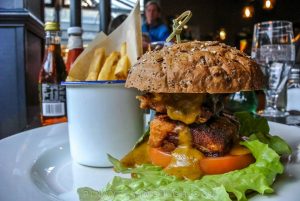 I’m not going to end this entry without giving you a tip on where to get food while in Greenwich. Now I don’t claim to be an expert of Greenwich especially because I’ve only been there 5 times and almost all of the times, I ate only in place – the Gypsy Moth. I don’t know why but everytime I’m in Greenwich I’m always drawn towards it. Possibly because of its inviting façade with all the flowers at their outdoor seating area or maybe because it’s the closest pub to the DLR station. Food served was great in all those times that I’ve visited it. You can’t really miss it as it’s the only pub right across Cutty Sark.

There’s my Greenwich day trip tips and I hope you enjoy your visit to this amazing place! 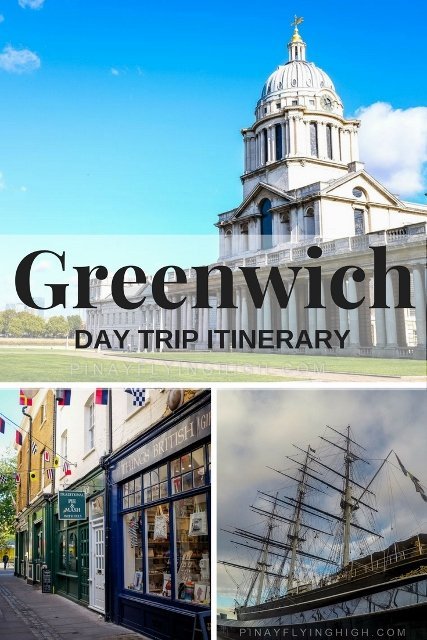