To celebrate Greek Easter in Dubai, we went to the Greek restaurant at Majestic Hotel in Mankhool, Bur Dubai – Elia. For your information, Easter is a big celebration in Greece. It’s kind of like Christmas for them. So I do believe that there is no better way to celebrate this occasion than being with the people who takes this rather seriously. I didn’t know how serious it was for them until I saw the boyfriend’s gorgeous friend – Maria, wearing a dress. It’s my first time to see her in a dress as she’s usually wearing a laidback shirt and jeans ensemble, in fact when she arrived that night from Fujeira, she was wearing cowboy boots. So my jaw dropped when I saw her all girly and pretty in her dress. 🙂 If I had known this information, I should have dressed more appropriately for the occasion. I was wearing slippers, jeans and a shirt. Haha!

The restaurant was made to look like a sophisticated Greek Taverna from the inside and a cozy, garden-inspired al fresco dining area outside. It was packed, of course by Greeks. There was a big family dining beside our table and I can’t help but chuckle as I saw a mother wiping her son’s back (probably from sweat) and giving him a lecture about behaving well for the night. Of course I did not understand the whole thing but someone was translating it for me. 🙂

So the Easter dinner costs AED175 per person excluding the drinks. It’s a 5-course meal and I must say that the Greek cuisine is probably the European cuisine that I’m most likely to adapt to the easiest – apart from Italian of course (who doesn’t eat pizza and pasta anyway?).

As soon as we were seated on our table, they gave each of us the traditional Greek Easter egg which was red in color. It’s kind of new to me as I’m used to seeing easter eggs in all sorts of colors and sizes, apparently it’s only one color for the Greeks. We started breaking each other’s eggs as what the Greeks traditionally do. Mine was broken instantly. 🙁 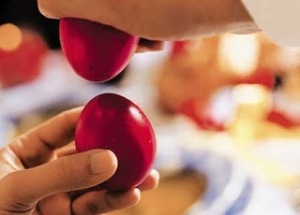 For appetizer, they served us toasted bread with this absolutely amazing dip called tzajiki. It’s yoghurt mixed with cucumber, garlic, olive oil (of course!) and parsley. I’ve had this before at Istanbul Flower Restaurant and Cafeteria but I really didn’t like it there. The one they served at Elia is much better. 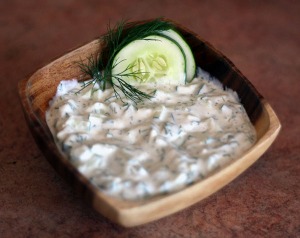 Then came the much awaited magiritsa soup – a traditional Greek soup served during Easter. It is made up of the intestine, heart and liver of a lamb which is absolutely fine with me. I’m a Filipino and we eat all kinds of internal organs of all kinds of animals which are deemed fit to be eaten. They say that since Greeks roast lambs during Easter, they make sure that all of the parts of the lamb are not put to waste thus, the magiritsa soup. My only concern is, it was served rather cold. It would have been truly extraordinary if it was hot. 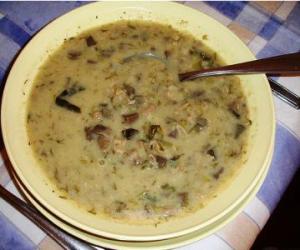 The third serving was sikotaria krasati, which I believe was also made of lamb’s liver and other innards but this time, cooked in a stew.

I was already full after this serving.

To somehow take a break from all the meat we were taking in, the fourth serving was a Greek salad. Well this needs no further introduction, unless you’re a bit stupid or have been living as a hermit. 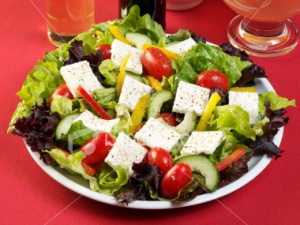 The feta cheese made me more full than all the lamb intestines I consumed.

Then finally, the main course: the braised lamb. It was cooked well that it melts under your fork without exerting much effort to take a piece out of the big chunk. The sauce was fantastic, it’s just a shame that I was already full and I’ve eaten only 2 pcs out of the 6 which was served for me. 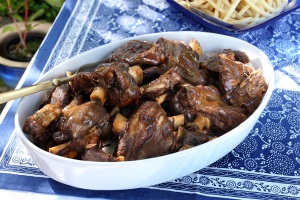 There will come a time that I’d be able to eat this whole serving, just wait!

I didn’t really care much about the dessert because I’m not very fond of sweets. So the galaktompoureko was left neglected after the first bite which worked out well for the boyfriend as he ate it all.

All of these food together with about 3 bottles of white wine made me really really full and drunk! It was a fantastic night! All it lacked was people breaking plates while dancing with their arms linked to each other and it would have been an authentic Greek experience already for me.

My rating: 8 out of 10. The service was very slow thus the 2 points less, but I would definitely go back soon to use my discount! (discounts doesn’t apply during special events, oh well!)

To sum it all up: it was a fabulous night! Oppa!