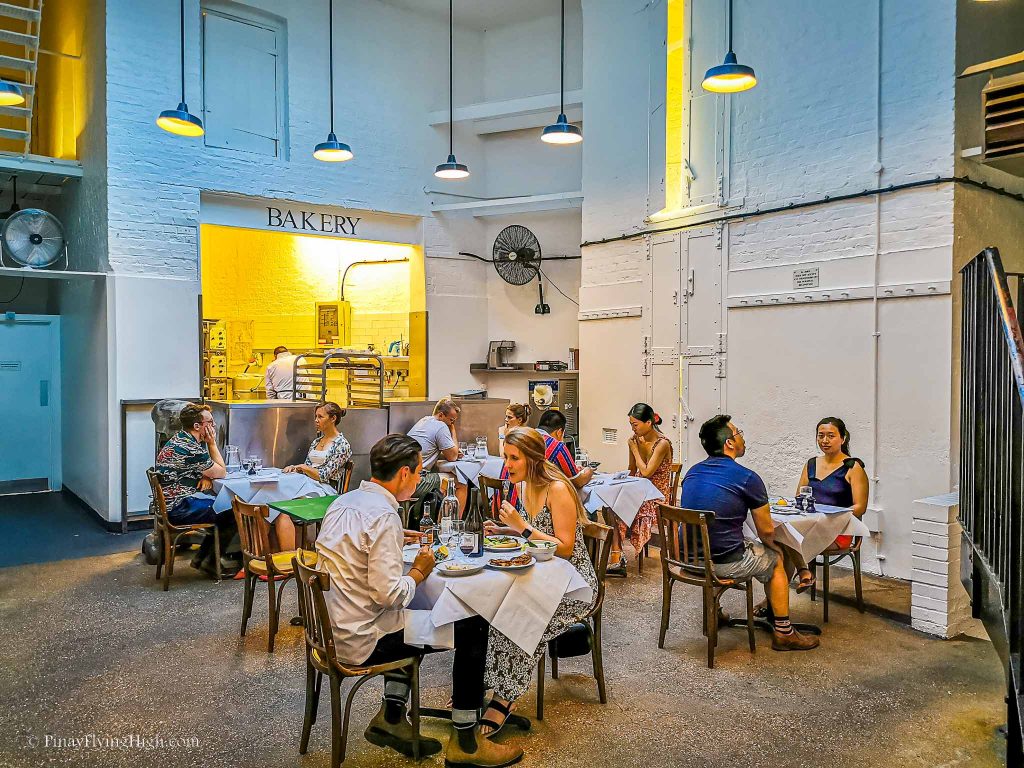 I finally had a chance to dine at this no-frill Michelin-starred restaurant by the famous Fergus Henderson and I must say, Bourdain’s claim of it being the restaurant of his dreams is valid.

I’m a HUGE fan of Anthony Bourdain and when I say huge, I meant I actually cried and mourned for a few days when I read about his unexpected demise. I still feel like we’ve lost one of the most influential and highly respectable individuals in this world that it’s now a tad bit grayer than it already is. Never met the man but Bourdain has influenced how I travel and eat from his numerous TV shows. I still can’t make myself watch the last episode of Parts Unknown though because it just breaks my heart into pieces.

Anyway, I first saw St John on Bourdain’s The Layover episode in London and at the time, I wasn’t even living in London yet nor did I think that I would ever live here. So I thought, it’s a cool restaurant – a no-frill, no dress code, Michelin-starred restaurant which serves bone marrow and other offals celebrating the traditional way of British cooking. Growing up in the Philippines, I’m very much used and exposed to eating offal in some of our dishes so I just thought it was cool that British do the same. I thought it was unique to us.

When I moved to London, I have bookmarked quite a lot of Bourdain’s choices of restaurants but then there are so many other restaurants that made it to that list. There are just way too many choices here that it was hard for me to keep up. Thankfully, my equally foodie friend C suggested that we dine at St John during the #EatOutToHelpOut scheme which means we’ll save £20 from our total bill. She said it would be her treat to me for being her personal photographer and videographer around London (lol)  so of course, I immediately said yes (not that I’d ever say no to it even if it wasn’t a treat).

We arrived at St John at exactly 6pm just in time for our dinner reservation. The restaurant has a very industrial design with bare white walls, a couple of tables and chairs and a small bar and a bakery. It’s exactly how I expected it to be as Bourdain has described it – the restaurant aims to not distract its diners with any other things except for the quality of their dishes.

Their menu keeps on changing everyday based on what’s available in the market, it’s normally published online at around 10am on the day of your visit but thankfully, the very dish that I went there for is always on the menu – the roast bone marrow with parsley salad. 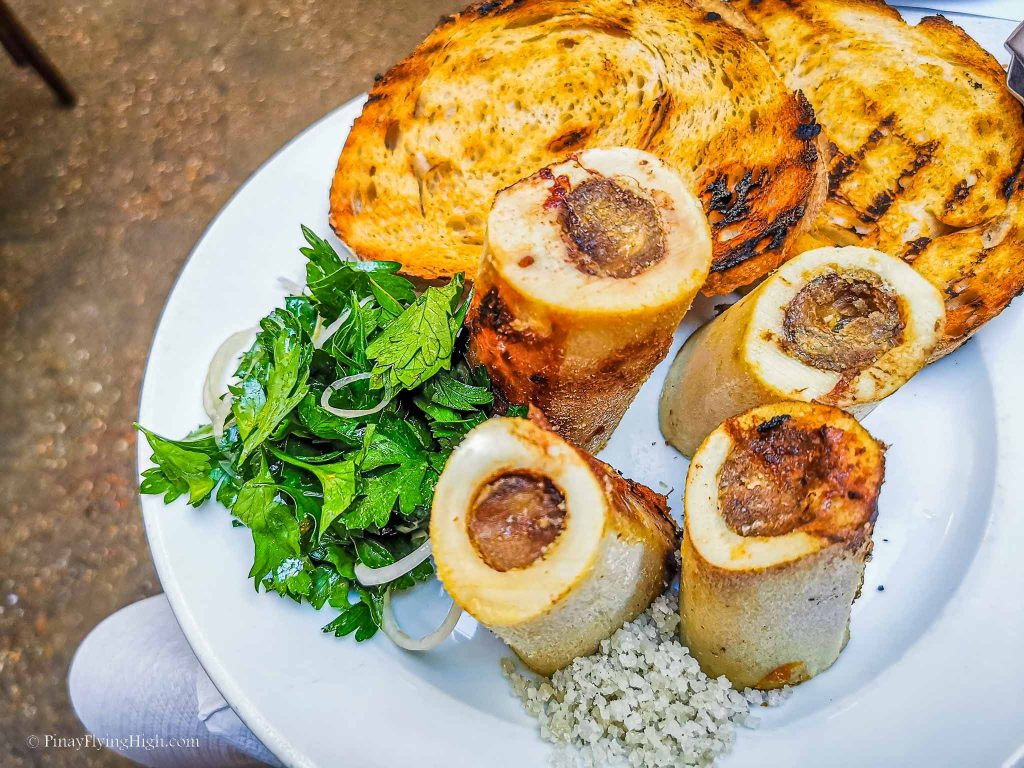 It arrived beautifully on a plate with rock salt and of course, the sourdough bread freshly baked from their bakery. It’s just how I pictured it to be based on Bourdain’s shows. The creaminess and the buttery taste was so moreish that you simply can’t get enough of it. The rock salt made it even more toothsome while the parsley salad added a bit of kick into it. Put it all together in a sourdough bread and you’ve got the most luscious open-faced sandwich right there. It’s an unpretentious plate of luxurious taste – it was amazing! 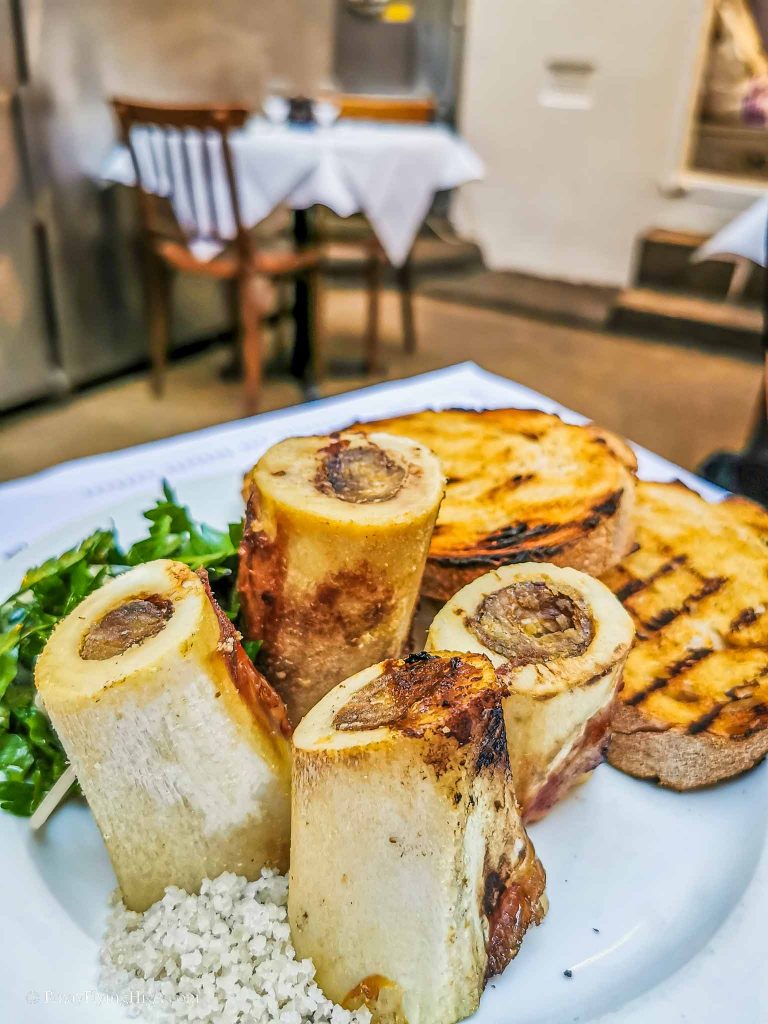 My thought was just to have the bone marrow for starter and main which I’m glad I didn’t do because it was too heavy and buttery, I would have gotten sick and tired of it if I had another one and that’s something I don’t want to happen. 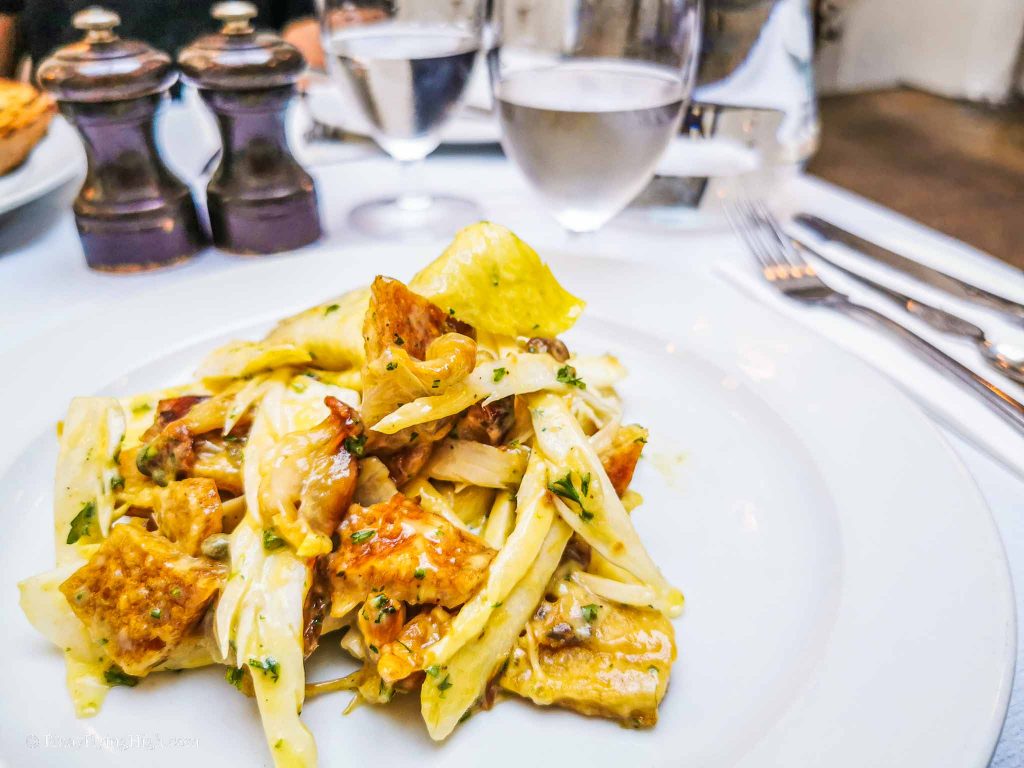 We were lucky to have one of their famous dishes as well on their menu when we visited – the crispy pig skin with dandelions. Again, growing up in the Philippines I’ve always loved crispy pork skin – we’re a very pork-oriented country as you may know so this somehow reminded me of my love for a crispy chicharon. :p 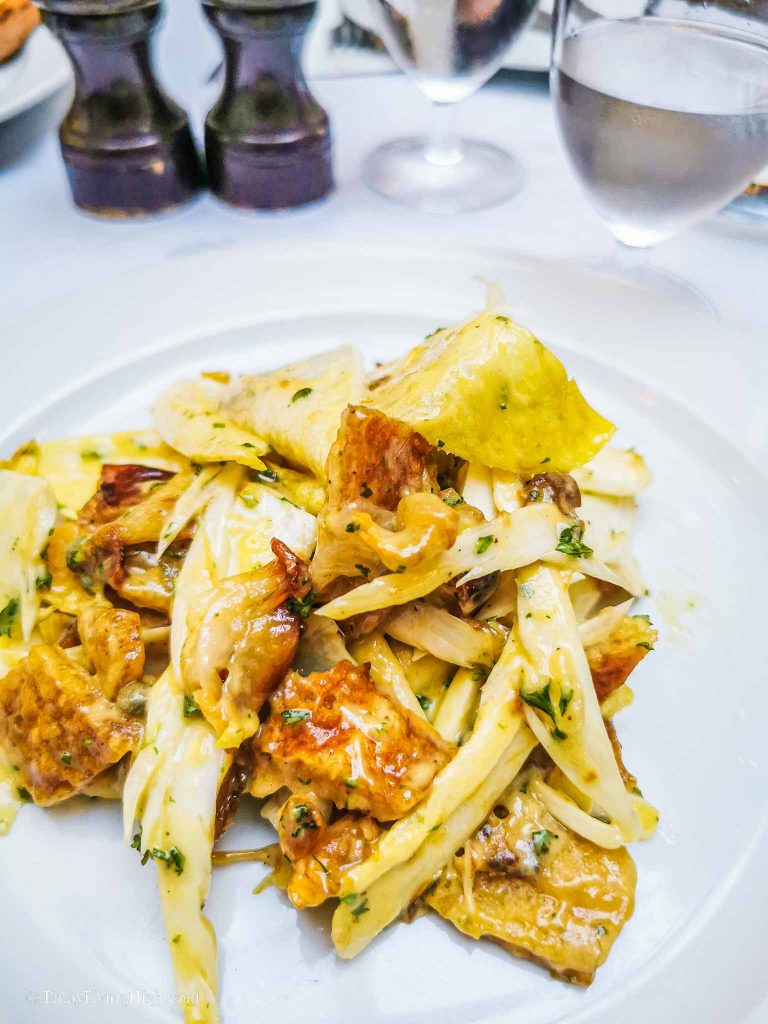 The dish, once again, was so simple yet mind blowing. The portion doesn’t look so big specially if it was to share with someone else but trust me, it’s more than enough for two. I’ve never eaten crispy pig skin with dandelions before or maybe let’s rephrase that, I’ve never eaten dandelions in my life until that day. It added more crunch into the dish and the sauce used somehow lessened the saltiness of the crispy pig skin. It was so glorious that just writing about it is making me so hungry right now. 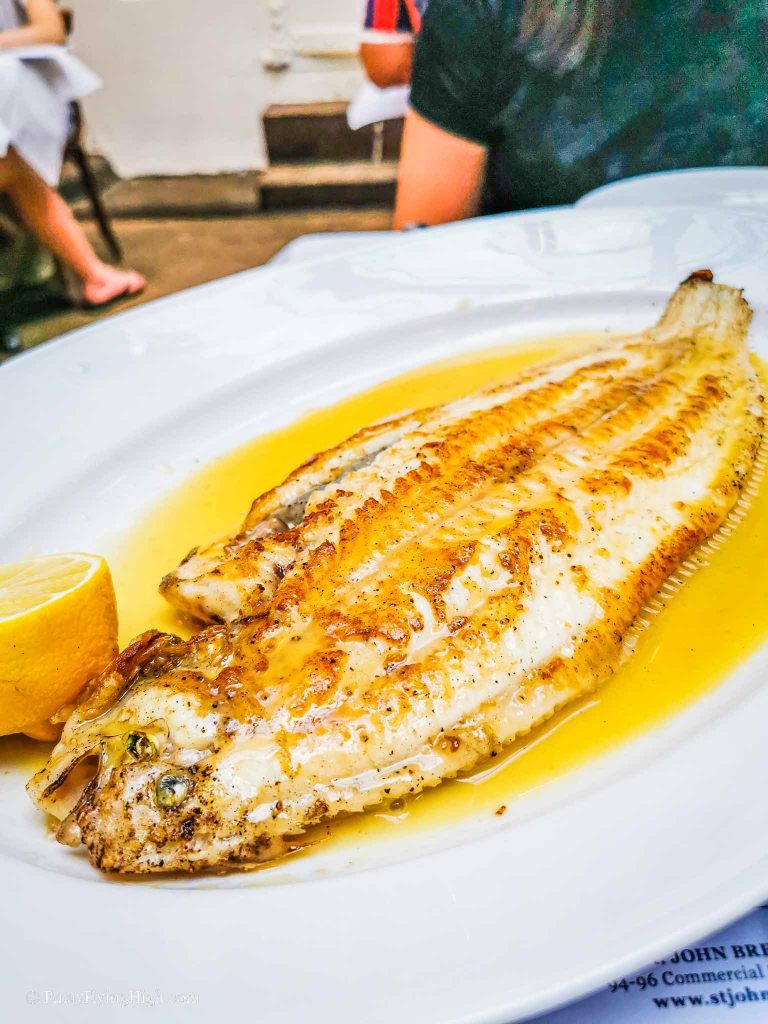 We were already full from our two starters when our whole dover sole arrived. Again, simply cooked but oozing with flavours. We were successful in finishing most of it but didn’t have room for desserts unfortunately.

The highlight of our meal was definitely our starters, it’s what perfect dreams are made of as Bourdain claimed. 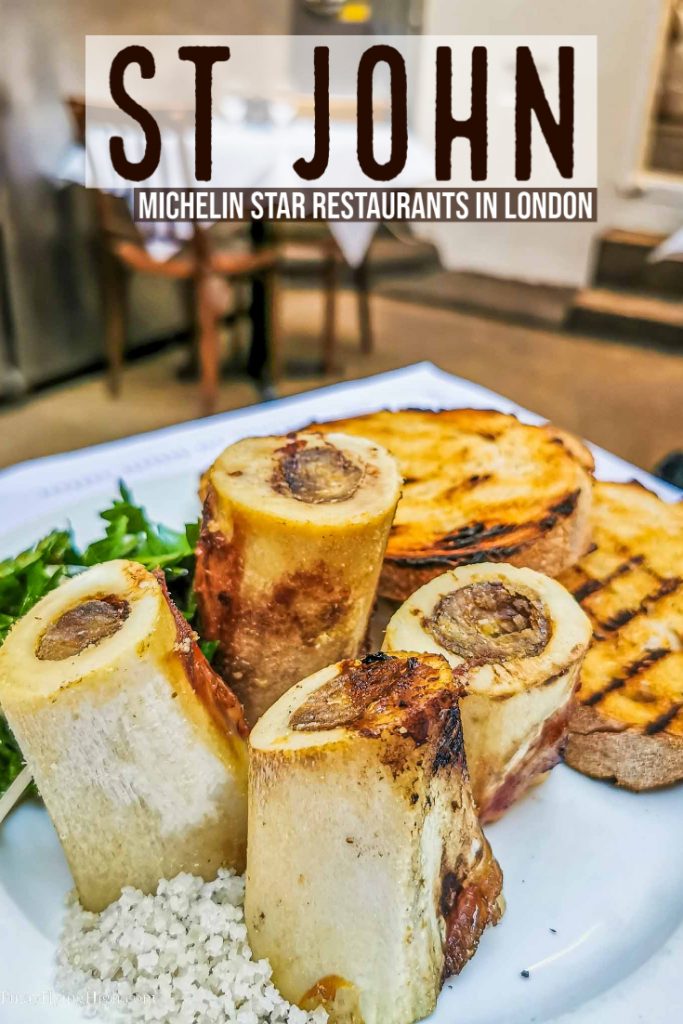 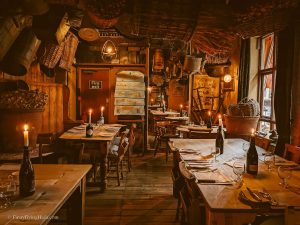 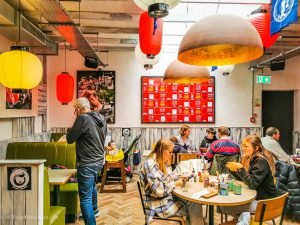 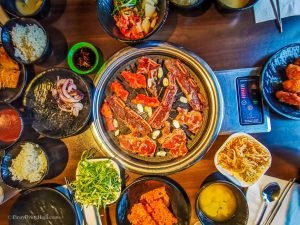 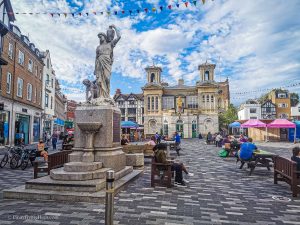 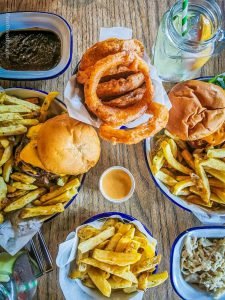 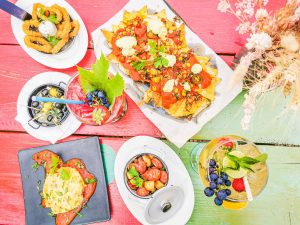