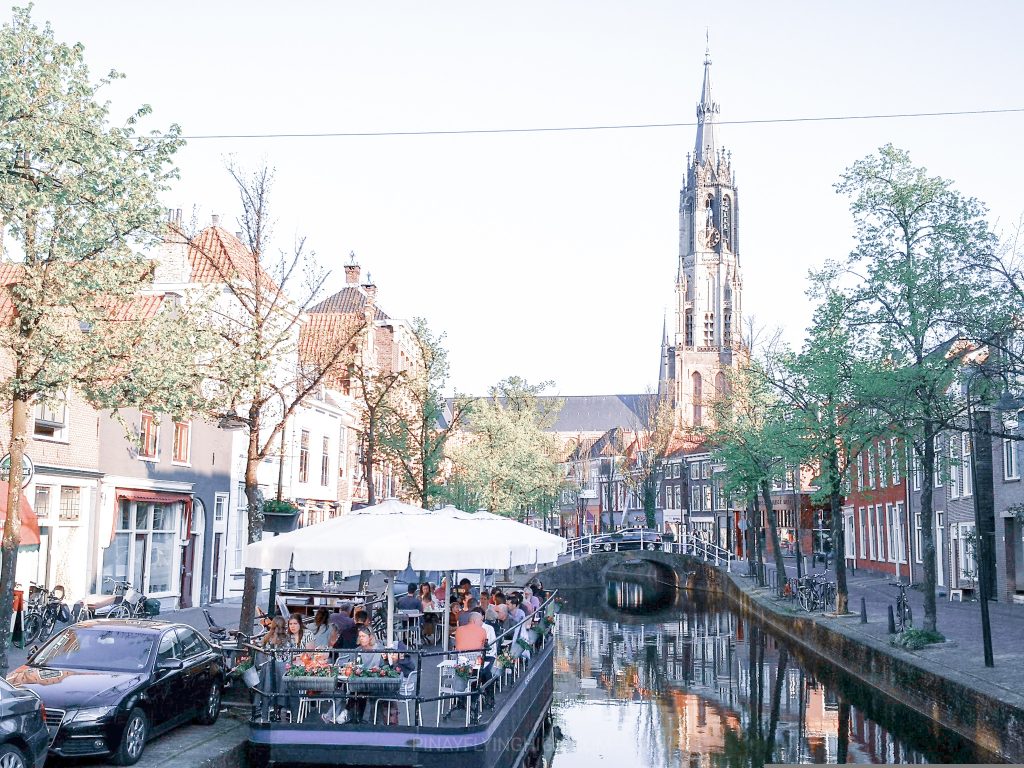 With its proximity to the capital as well as its size, Delft is also famous as a day trip destination from Amsterdam which I think is not quite right and it definitely deserves to be explored for more than a day.

Sun was out in Delft the entire weekend that we were there. The city was buzzing with tourists along with the locals trying to catch as much sunshine as they can since we never really know until when it will last. Cafes and restaurants were packed, the Market Square was busy and the weekend market was crammed.

It was our first visit to Delft, a trip that we’ve put off for quite some time. The Greek Mister’s cousin lives there along with his family and we’ve been planning on visiting them for the longest time but never had the chance as something always comes up or our schedule doesn’t really allow us to. This year I said, we’ll definitely have to visit them to which the Greek Mister obliged to.

We took the Eurotunnel train on a Saturday and drove through France and Belgium until we reached Delft. Unlike our first drive through Europe when we went to Chamonix for Christmas two years ago, this route didn’t include much toll fees except for one. We arrived Delft at around 4pm which would’ve been earlier if we didn’t get stuck in Easter traffic on the way. We immediately met The Greek Mister’s cousin in their lovely home where we’re staying for the whole weekend.

I fell in love with Delft at first sight: the canals, the beautiful architecture and the small town feel of the whole place. I’m not a city girl and this is the kind of place I’d definitely consider moving to.

Delft is famous for its canals, quaint bridges and its blue and white ceramics, it looks like Amsterdam but a bit tamer and smaller. With its proximity to the capital as well as its size, Delft is also famous as a day trip destination from Amsterdam which I think is not quite right. Delft deserves to be explored for at least two full days, there are a lot of nooks and crannies that you can go into apart from the canals and the Market Square.

Interesting fact: Did you know that Delft was the first place where workers got a pension and day off? Thanks to a man called Jacques van Marken, we can now all enjoy these luxuries which didn’t exist prior to 1800s.

Delft University is known to be the best in the field of technology and engineering attracting students from all over the world. Due to this, the university town adapted to its young demographic, lots of restaurants, bars and cafes are dotted all around town.

The first restaurant that we went to was Grk&Zo, a Greek restaurant in a lovely small square. I wasn’t a big fan of the food as I think there’s no other place to eat good Greek food other than Greece but the outdoor seating area here was lovely. We stayed there from the afternoon until around midnight, if not for the fact that it was getting colder we probably would’ve stayed there longer.

Thanks to our Delft hosts, we also had a chance to eat at Cafe du Midi – a lovely restaurant in a unique animal farm setting. I’m sure there are a lot more places like these to visit in Delft but three days weren’t enough to explore all of it.

The painter Johannes Vermeer was born in Delft, he’s known for his work depicting women in everyday domestic scene. Even if you’re not really into art, I think you’d definitely know one of his works called “The Girl With The Pearl Earring”. The Vermeer Centrum is an information centre dedicated to the painter and the work of his contemporaries.

I wasn’t a big fan of the Market Square though because it was too busy when we were there. Also, it looks like any other Market Squares that I’ve seen – I loved the hidden alleyways away from the crowd more. There were also lots of walking and cycling paths around the area which immediately gives you a feeling of being transported in the countryside.

It was an amazing weekend! More than the beauty of Delft itself, it was the company that we were with which made our stay a lot more enjoyable.