If you have been following my blog, – you would know that I came up with the idea of throwing a surprise birthday party for the boyfriend last month which was a complete failure, thanks to nature’s wrath at that time. You can read all about it by clicking here.

So yesterday, we’ve finally decided to get it over with – with or without his friends. It’s kinda disappointing for me that everyone who joined us were my friends and none of his friends could come (they’re all working on a Friday which sucks, really). But the boyfriend decided that we have to do it and get it done as the yacht company might forget that I’ve already made a downpayment for that cruise. 🙂

In all fairness to Marine Concept, the company we booked the yacht with – their staff is marvelous. There was no need for me to remind them of who I am (the one whose yacht party didn’t push thru) when I called them up to book the yacht once again for yesterday. If I dare say it, I think Beate (the very efficient and highly-customer oriented Managing PArtner of Marine Concept) was already feeling sorry for me for all the mishaps that we’ve encountered which made this yacht trip delayed for more than a month already. So when she finally said there’s an available slot of 12nn yesterday, even if 12nn is a bit too early for a weekend for me – I said yes, we’ll go ahead. As soon as the confirmation is received, I’ve sent an email blast to all my friends who may want to join us (I needed 8 people but just got a confirmation of 6… boo hoo) and asked them if they can come – YES or NO. 🙂

Fast forward to the day of the cruise, we arrived at Le Meridien Mena Seyahi at 1130 and Jacob, our fabulous and very informative skipper was already there, waiting for us. We started the cruise I think 10mins earlier than the agreed time (yipppeee!) and I must say that the cruise was worth all our wait as it was just oh so FUNTASTIC!!!!!

Our skipper Jacob asked us if we want to go for a swim. Well it turned out that it’s just me, the boyfriend and my friend Deny who are ready with our swimsuits on. Well, if ever you’re going for a yacht cruise (which is a MUST here in Dubai) you have to go for a swim!!!! Seriously! I think it all worked out well to our advantage – this thing getting delayed. Last month, it was so damn cold and I do believe that if we went ahead with the cruise then, we won’t be able to brave the waters of the Arabian sea as we might die of hypothermia. I know I would. 🙂 Anyway, the weather was perfect yesterday – it was actually hot so the cold sea water was refreshing! We anchored behind Burj Al Arab and that would be the closest I could get of using the facility of that seven star hotel. Hehehe. It was a perfect way to end this cruise – a splash of cold sea water. 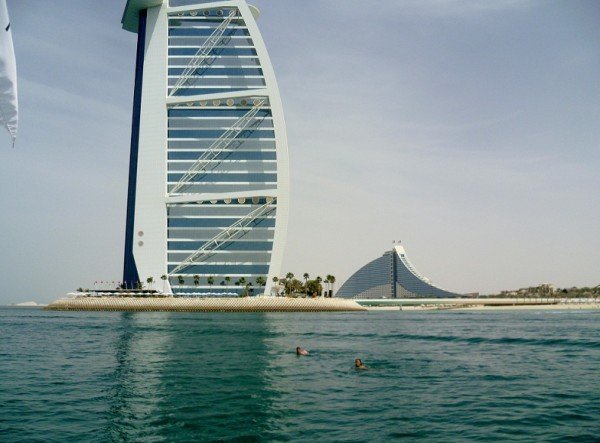 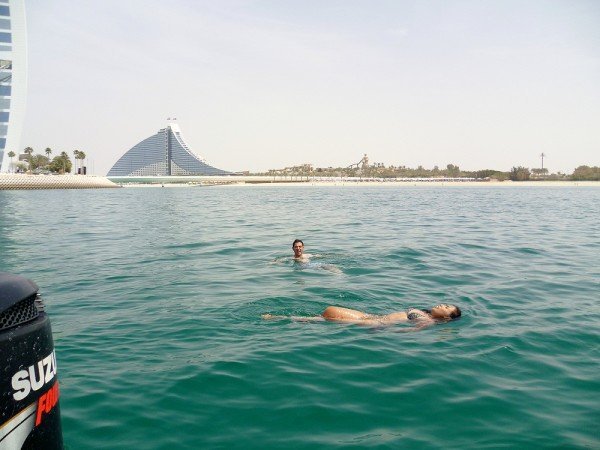 After the swim, we had a quick lunch – still with the Burj Al Arab towering over our yacht. Have I told you that I’m a bit seasick? No? Well I am and I felt that seasickness just as I was finishing up my pasta. I found a solution though, don’t look at the boat. 🙂 Instead, stare out at the sea or something fixed like the Burj. Hehehe. Seriously, looking at the boat swaying made me want to throw up but as soon as I looked out at the horizon and fixed my eyes at the Burj, the need to throw up vanished. 🙂 After everyone has eaten the fabulous Filipino-style spaghetti prepared for us by Chuck, we sadly went back to the dock and bid farewell to our 2-hour yacht cruise. I really should have booked a 4-hour yacht cruise instead, well there will be next time that’s for sure. 🙂

Well, as I have said earlier – yacht cruise is a MUST to do here in Dubai. It would be a shame if you’ve been here for 3 years and not tried it yet. Having said that, if you want to have a cruise as fabulous as ours – you can contact Marine Concept below:

I failed to mention that one other reason why I chose Marine Concept amongst all the other yacht charter company here is because: they were the only ones who took my query very seriously and responded on time. It just took them merely 5 minutes after I sent an email to them before I got a reply from Beate who was in a boat show in Dusseldorf at the time. So yeah, with that dedication – I know we’ll be in good hands. 🙂

I now leave you a mandatory narcissistic photo of myself: