Doha, Qatar: Getting Over the Post-Holiday Blues at Market by Jean-Georges at W Hotel 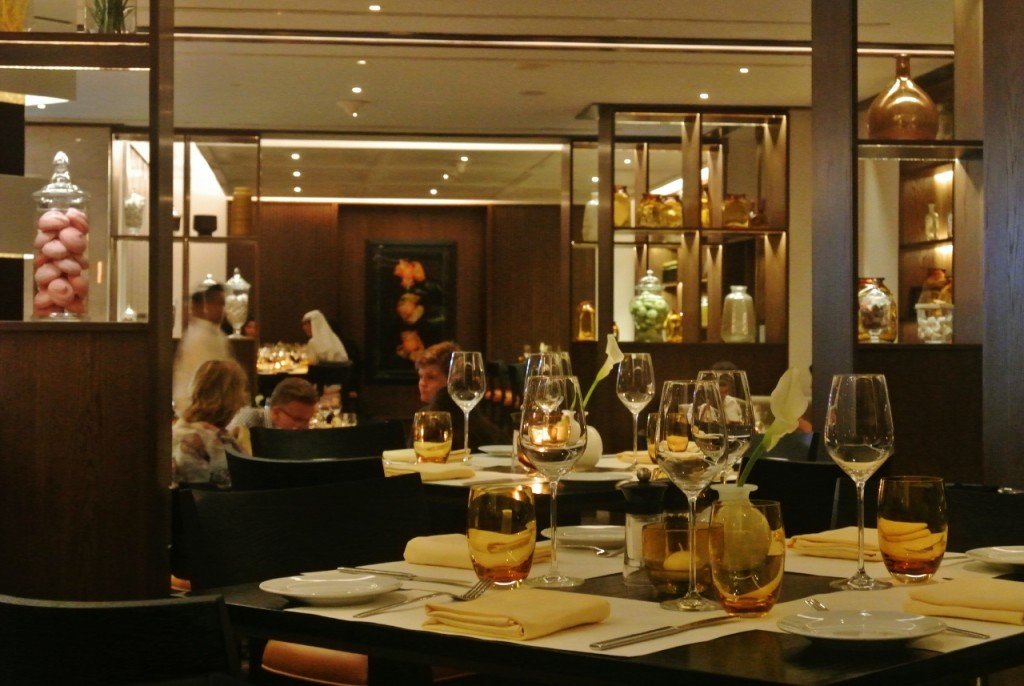 It has been more than a week now since I’ve come back from my holiday and since then, I wasn’t in the mood to go out. Don’t you just feel a bit melancholic after a great holiday? You wonder why it has to end. As they say, some good things never last so I’ll have to deal with the fact that the holiday is over and I am now back in Doha. The other day, my friend E asked me to have dinner with her which I thought would be a great way to take me out from this depressing state of mine so I immediately accepted her invitation. Our destination was Market by Jean-Georges at W Hotel, a restaurant I haven’t tried yet even though I’ve been a frequent visitor of that property. She on the other hand claims to be their number one patron as it is her favorite restaurant in the city. I got more curious.

I arrived a bit earlier than E and was surprised that the restaurant was almost full for a weekday. There was a confusion with our reservation though which was under my friend’s name. I gave them her full name and even her mobile number but I was told that there was no reservation with those details but when E came, reservation was found immediately. Hah!

As I perused through their menu, the burger night promotion caught my eye – for QAR125 you get your choice of burger with a side dish and dessert. They do have a variety of all kinds of burgers but since I was trying to lose weight (let it be known that I have used the word “trying” losely in that sentence), I opted for a salmon burger with a side of *drumroll please* onion rings. So much for trying to lose weight yes? 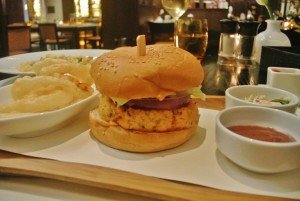 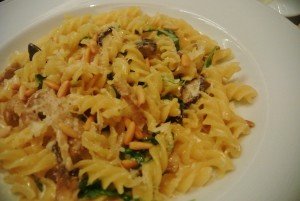 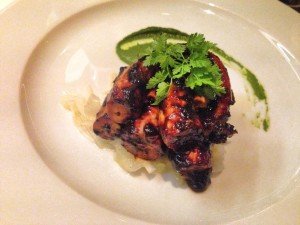 The salmon burger was tasty however, the onion rings was a bit of a let down as I couldn’t taste the onion itself. I’m not even sure if there was an onion inside that tempura flour. :p E ordered black pepper octopus, the very reason why we were even in Market by Jean-Georges in the first place as she was craving for this dish. I have to be honest here though, I didn’t like the octopus BUT that’s because I have had so much of it when I was on an island-hopping holiday in Greece – a place where seafood is known to be sourced out fresh from the sea straight to the kitchen. I’m not saying that what they had at Market by Jean-Georges wasn’t fresh, it’s just different specially since the black pepper sauce was overpowering the taste of the octopus itself. 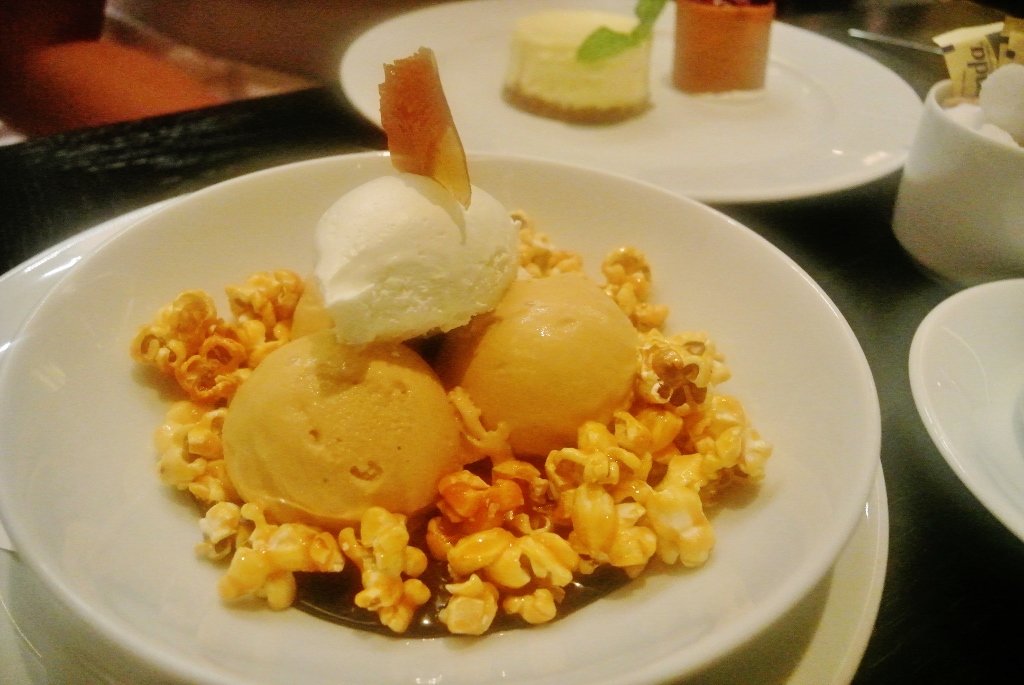 For desserts, I had Salted Caramel Ice Cream Sundae while E had the Market Cheesecake. The ice cream sundae was absolutely amazing! It had a chocolate fudge sauce at the bottom, topped with 3 scoops of ice cream and sprinkled with salted-caramel-flavoured popcorn and nuts – the combination of it all is like a match made in heaven. I loved it!

Service was also good – fast and friendly, they are too friendly though which became a bit annoying. For the whole 2 hours that we were there, I think we were approached by waiters at least 7 times to check if everything was ok or if we need anything else. I know they’re just doing their job and would like their diners to be as satisfied with their service and food as possible but 7 times? It’s more than the number of courses we ordered. 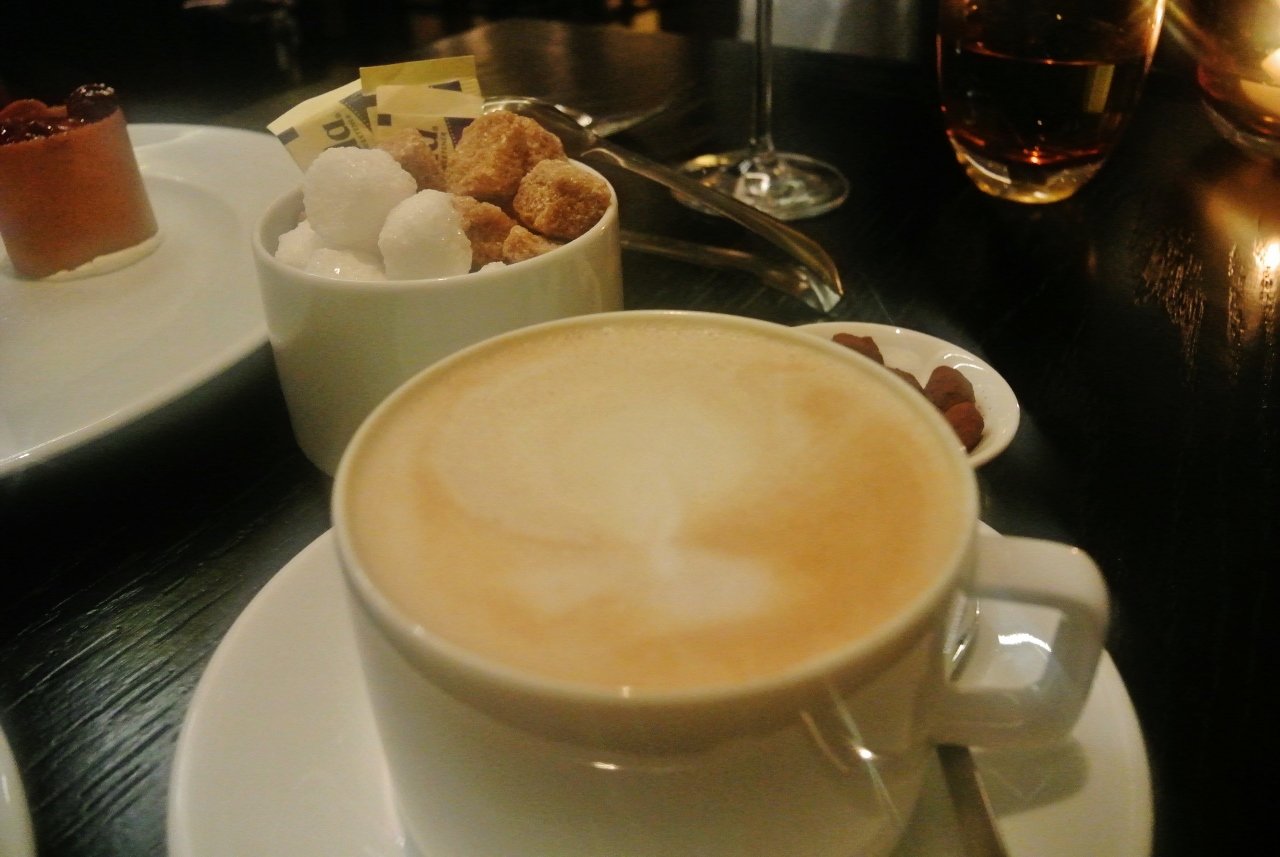 A sweet ending for this already great dinner!

I did enjoy the whole dining experience though, it was a break that I needed to feel like myself again in Doha. Market by Jean-Georges is definitely a good choice to get over your post-holiday blues, it would make you realize that coming back to Doha after a great holiday isn’t so bad specially if you have a wide variety of good restaurants in the city.

PrevPreviousFrom Thessaloniki to Pelion, From a City to a Paradise.
NextThings To Do in West Virginia: Flat Water Tubing at The Shenandoah River.Next