Day Trip to Saint-Emilion from Bordeaux 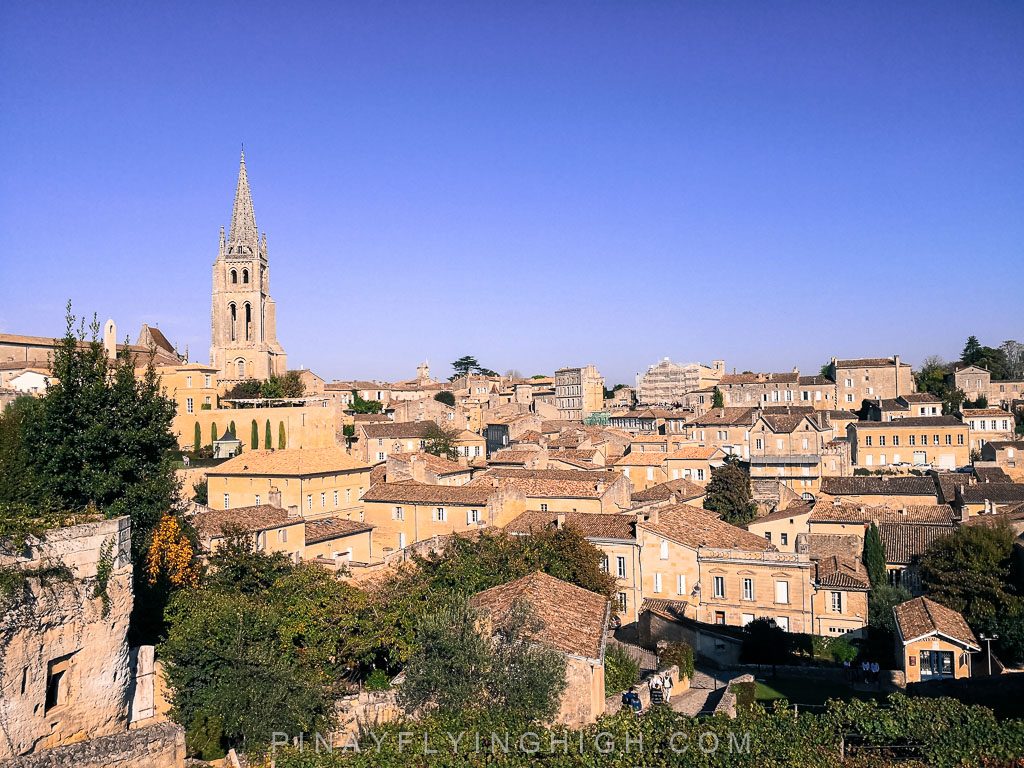 I can't recommend a day trip to Saint-Emilion from Bordeaux enough, it's a historical postcard-worthy village famous for its vineyards and scenic beauty.

Famous for its vineyards, Saint-Emilion is quite popular for wine aficionados which unfortunately, doesn’t include me *gasp*. I’m not really into wine but Saint-Emilion caught my eye because of its picture-perfect scenery. It didn’t take a long time for me to decide to spend a weekend in Bordeaux with a day trip to Saint-Emilion for my birthday.

From Bordeaux, we took a 30-min train ride to Saint-Emilion. Most of the passengers in the train were also headed to Saint-Emilion so as soon as we disembarked from the train, we hurriedly walked towards the medieval village ahead of everyone else as we were hungry and we wanted to make sure that we’ll get a table for lunch. I was getting quite hangry (lol) but the beauty of Saint-Emilion made me calm down. :p

Saint-Emilion is 35km from Bordeaux and is one of the famous wine-growing region in the area. It’s a UNESCO World Heritage Site with incredible architecture and postcard-worthy scenery with the vineyards surrounding it. Previously called Ascumbas, it was renamed Saint-Emilion after a monk who lived in a carved rock as a hermit. The monks who followed him started a commercial wine production in the area.

The restaurant we had in mind where we’ll have our lunch had their outdoor seating area closed so we decided to have our lunch instead in Chez Germaine with a nice outdoor seating near the bell tower of the church. We had mussels which was extremely good and a side of mushrooms. After lunch, we joined the Underground Saint-Emilion tour by the Tourist Office of Saint-Emilion.

I highly recommend joining the tour as there’s a hidden treasure beneath this medieval village which you won’t be able to access apart from this tour. The tour includes an access to the hermitage of Saint-Emilion where you’ll get a glimpse of the simplistic life of Emilion as a hermit. This is also where you’ll find a special seat believed to make any woman who sits there pregnant within a month or so (I avoided that seat lol).

You’ll also have access to the catacombs where the guide will tell you interesting stories about the legend and tradition in this area during the medieval times. During the tour, you’ll also get a lot more insight about the monolithic church and the things being done to protect and preserve it. It’s quite fascinating to see a church carved out of a rock instead of built on it. I find it interesting as to how people from that time was able to build something so incredible with the absence of the modern technology that we now have. The tour lasts for 45 minutes and is EUR9 per person, I can’t recommend it highly enough.

After the tour I left the Greek Mister in Amelia Canta, a restaurant located in the Place du Marche – a pretty square in front of the church. While the Greek Mister’s having his drink, I explored Saint-Emilion more and it was then that I realized how small it actually is. While planning for this trip, I actually considered staying in Saint-Emilion instead of Bordeaux but I’m glad that I did it the other way around as the medieval village while extremely pretty, is also very small. I explored its many alleyways and took loads of photos in the process. It’s such a photogenic village, there’s something to admire in every turn.

From a distance, I can see a tower which I think offers an unobstructed view of the whole of Saint-Emilion so I whipped my phone out and searched for where that tower might be and how do I get there. It’s called La Tour du Chateau du Roi Tower, a 13th century tower which was a part of a castle that once stood there. I left my bag with the Greek Mister so I wasn’t able to go in as it had an entrance fee of EUR2 per person but the view from the base of the tower itself was already worth it.

I walked around some more and basked in the prettiness of this place before joining the Greek Mister for an afternoon drink. We were extremely lucky that the weather was perfect at the time, we weren’t expecting a 24C weather in Saint-Emilion during October but there wasn’t a cloud in sight during our visit. We were definitely extremely lucky to have chosen that day to go on a day trip to Saint-Emilion.

We left the village at around 1630hrs to catch our 1709hrs train back to Bordeaux. From the train station, the village is a mere 20-min walk away passing through the many vineyards surrounding Saint-Emilion. It was a day definitely well-spent. 🙂