The trip to Goa was more like a “curse fest” for me as whenever you’re with Troy, you’ll definitely hear a lot of cursing.

We embarked on a 45min motorbike ride from Baga beach to Arambol beach on our second day. Stopping along the way to get ourselves a heavy breakfast and just technically gave our asses some break from sitting on the motorbike for too long. Troy, who is such a gentleman, made me carry his backpack with his humongous camera and camera gears inside it. Not to mention that he would want me to die first instead of breaking the camera..

Troy: If ever we get into an accident or something I’d really appreciate it if you’ll fall down face first or maybe take it on your side instead of falling backwards and onto the backpack.

Apparently, my life is worthless compared to his camera. I pity his future wife.

After having a quick breakfast in this place: 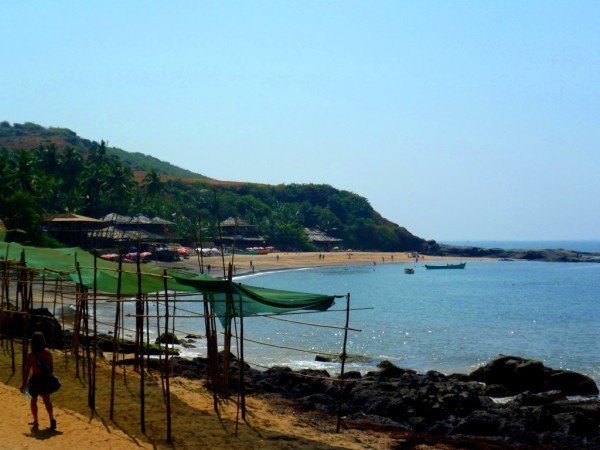 somewhere between arambol and baga beach

We continued our journey further up north. It was scary for me really, riding a motorbike. Everytime I see something coming towards us I would dock behind Troy and just close my eyes and hope for the best. Fortunately, nothing ever happened during this entire trip. I think I kind of got the hang of it finally on my last day in Goa.

I couldn’t feel my shoulders, my ass and my inner thighs when we arrived at Arambol. I’m a lightweight but you gotta give me credit as it was my very first time to ride a motorbike and already embarked on a 45min ride. As soon as I laid my eyes on Arambol beach, i knew that this is going to be my favorite place of Goa. I don’t know but there’s something about that place which satisfied what I was looking for in a beach. A long stretch of wide shoreline, restaurants on the left, big waves on my right and a maze of naked hippie people basking under the sun as we walk on the beach.

We went straight to the Laughing Buddha, a small shack which offers rooms to all the laidback tourists of Goa on a tight budget. 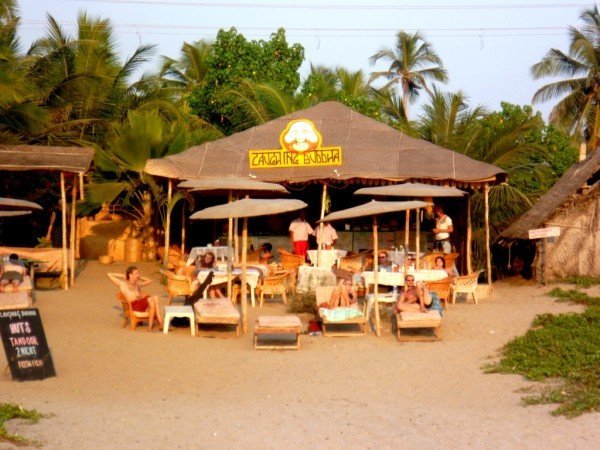 how laidback can a place get?

You know how I’ve always mentioned that all I ever need in an accommodation that I’m going to stay at when I travel is a bed and a toilet with shower? Nothing fancy and Laughing Buddha fits the description to a tee. 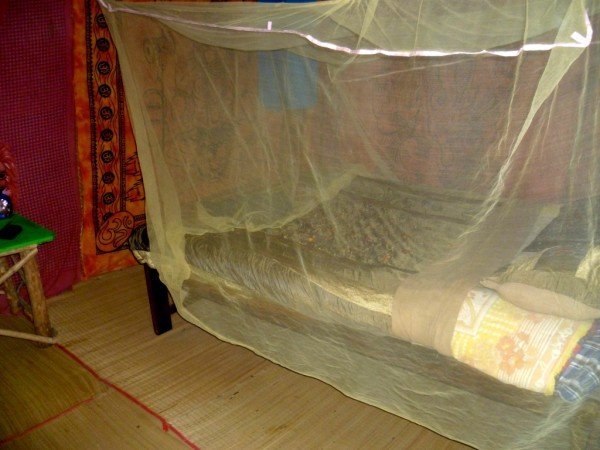 It was great! I absolutely loved the place as it’s so cheap and really gives you nothing but what you just need to survive a night. Plus, it only costs INR400 per night which is approximately USD9. How great is that? Seriously!

After we’ve told the owner that we’re going to take the rooms, we stayed at the restaurant to have a few more beers and just lounged lazily with a view of the beach right in front of us. When i suddenly realized that i’m supposed to be getting a tan and I’m not doing that sitting in the restaurant – I picked up Cole to keep me company while I walk on the beach. The water was of the right temperature, not too cold, not too hot – I wanted to get in the water but Cole was throwing one of his very rare tantrums (it was already 4pm without nap time for him) and cried as soon as the water touched his feet. While trying to stop Cole from crying, an Indian guy approached me and told me that I’ve got soap in my ears. By reflex, I touched my ear to check what I have but found nothing. He insisted though that there’s something and offered to take it out. Before I could even say no, he put a thin, tiny rod inside my ear and scraped it very gently. I backed out from him and almost tripped on Cole, he showed me the rod with some sort of gel on its tip which I’m pretty sure was already there even before he put it in my ear and told me that that’s what he got out of my ear. Hell no! I asked him to leave me alone and stay the hell away from me. Even after all those things, he was still asking me to clean my right ear. I don’t know, maybe he’s got ear fetish or something. So I went back to the group and asked them what could be the deal with that guy as I’m afraid that the guy put something in my ear and I will be deaf for the rest of my life (yeah, I’m paranoid) but Troy told me that it’s just a money-making scheme for them. Great! making money out of taking earwax off the tourists. Next thing you know, someone will offer to take your booger off your nose.

Anyway, the group finally decided to go to the beach for a quick swim but before that, I’ve asked Troy to take my signature “jump shot” photo on the beach which he gladly did. That’s why I like traveling with a photographer, you don’t have to wring their arms to take your narcissistic photos.

As many of you know, I’m a frustrated ballerina who finally accepted the fact that my body’s not as contorted as a ballerina’s body should be (read: my humongous legs are not very turned out) but I usually can do a decent jump shot of myself doing an “arabesque”. here are the results: 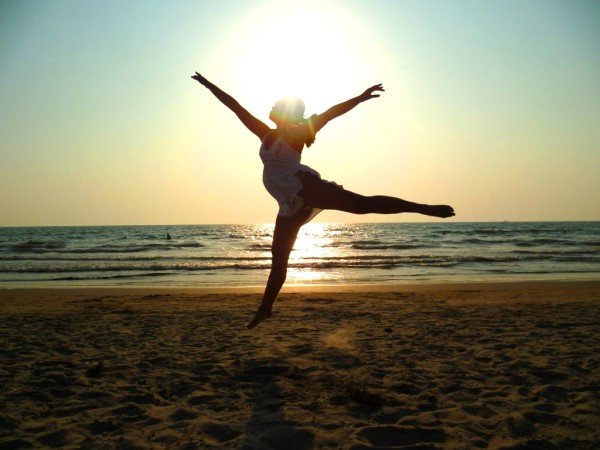 this is a dramatic jump i believe, with the sun’s rays trying to outshine me. :p 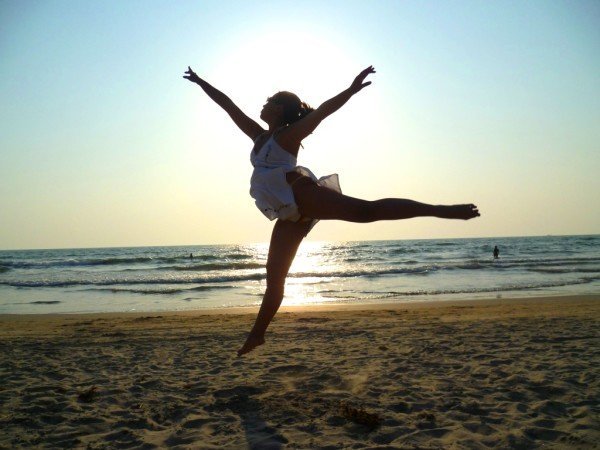 now this, is perfection!

After that perfect shot, we finally went for a swim. The water was absolutely amazing! I’m really not a beach person, which means I go to the beach to worship the sun but that’s just about it. I never go for a swim as I hate how the beach water makes my hair really sticky and most of the time I’ll be itchy all over my body. But the water at Arambol was just perfect! It’s also my first time to swim in a beach with big waves. Having said that, I’ve no idea how to deal with those big waves until i saw Troy jumping his way out of it. I think I’ve swallowed about 2 liters of sea water before I have gotten the hang of it. When I finally declared myself an expert on waves (I’m a fast learner), I swam towards Troy who was already too far away from the shore. So there, in the middle of the sea, Troy was doing this animated story about Bill O’Reilly’s Must Be God anecdotes when I saw this big wave coming towards us. I was facing the wave while Troy got his back towards it, for a split second I contemplated whether or not I should cut him off from his animated story-telling and tell him that a wave is about to drown him off mid-sentence or just let him go on with the story and “see what happens”. I chose the latter which is the darker side of me and just waited for nature to do its thing. If I can take that one ion out of my brain which holds the memory of seeing the oblivious Troy taken over by a big wave in mid-sentence, I would definitely do that and post it on youtube to spread love and laughter to the whole world. It was hilarious!!!!! I’m evil, I know and I like myself that way. 🙂

Anyway, as we walked back towards the shack we saw this:

That was a true Goan experience and lived up to my expectations of seeing a cow sunbathing with people on the beach. That cow right there was actually eating something off the sand (no idea what it is and didn’t want to find out) while the lady was clearly clueless that there’s a beast beside her as her ipod was on full blast and she’s just being all cool there basking under the sun. When the cow suddenly turned to its left and was on the act of lying down or pooping with its ass towards the lady, all I could do was to mutter the words: OH MY GOD! OH MY GOD! OH MY GOD! while Christine had a faster reflex and ran towards the lady and woke her up. Trust me, that scene wasn’t one of my “let’s see what happens” evil side, I just didn’t have that good of a reflex like what Christine has (or maybe Christine is just so much nicer than I am… I don’t know). 🙂

PrevPreviousDay 1 in Goa: You’re not a b*tch!
NextDay 2: Chill the f*ck out (Part 2)Next