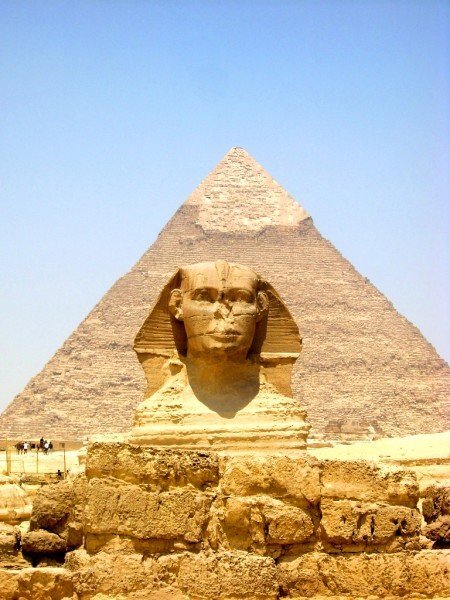 After having our breakfast, we headed out to Memphis which is the first capital of Egypt back in the days when a camel is considered a luxury. It is where the Colossus of Ramses II is located, the humongous statue sans its legs. I am not really fond of statues (except for David of Michelangelo which is just truly enigmatic) and this one didn’t impress me that much. Although it is a wonder on how they were able to build such a huge sculpture and how were they able to stand it erect. Entrance fee is EGP35/person. Outside the mini-museum are some other artifacts including the second largest sphinx in Egypt.

We then headed on to Sakkarah necropolis (entrace fee is EGP60/person) where the Steps pyramid can be found. Sakkarah pyramids doesn’t have the grandeur that the Giza pyramids have, so I think that’s the reason why tourists just scratch this place off their itineraries. But I personally think that it’s great, ‘coz you can go inside one of these pyramids for free (instead of paying EGP50 more to get inside the giza pyramid). Although the pyramid that we went into looks more like a pile of dirt than a pyramid, LOL. Anyhow, going inside it was a hard task and not really for people with rheumatism. The entry point and the maze going to the bottom of the pyramid where the tomb is located is about 3ft in height and 3ft as well on width. So you literally have to bend down to be able to move around inside it. It’s cool inside, not like how I expected it to be. There were lots of tombs for noble people around the pyramids and one particular tomb caught my attention, nothing spectacular about it but because I overheard one of the tour guides for Korean tourists said something in the line of:

I had to drag my friend Deny to walk faster before I bursted out laughing when I overheard such statement. Anyhow, the tomb was interesting since it has some hieroglyphs around it. I can feel the “ancientness” (if there is such a word) inside it. The stone carvings, the hieroglyphs – very very A.D. times. haha.

We then headed on to the Giza pyramids (entrance fee EGP60/person) “the big guy” of all the pyramids in Egypt. I asked our tour guide out of stupidity as to when do they start building the pyramids – before or after they die? She said that as soon as a new king holds the position of being the King, then he will start building his own pyramid. They really don’t care much about palaces, what is more important to them is to have the greatest tomb when they die. Weird!

The Great Pyramid of Cheops, the oldest and the largest – literally lived up to my expectation of it. It’s grand and made us wonder – how in the world were they all able to build it? It was explained to us later on that the pyramids did have a smooth surface but magically vanished. How? Probably looted. It is only the pyramid of Chephren which still has the original smooth exterior at the tip of it. A good 45minutes was spent here trying to get a perfect photo of me eating the pyramid. The photo session itself took us about 30mins and 15minutes more on bargaining for souvenirs.

We then went to the Sphinx which is a bit farther down from the Great Pyramids. I was a bit disappointed upon seeing the Sphinx, I was expecting it to be really massive but well, I don’t know probably having the great pyramids as a background of the Sphinx makes it really tiny. Then again, put anything in front of the pyramids then it’ll all be tiny. If my memory serves me right, our tour guide told us that the pyramids can build a wall around 1/4 of the earth with a height of 3ft. not sure if it’s 1/2 or 1/4, regardless…. it’s massive.

Anyway, the nose of the sphinx was broken – the tour guide told us that the nose was shot at by the canon of Mamelukes who used it for target practice and no, I don’t know who Mamelukes is.

On this day, Deny and I learned the art of saying “no”. Before going to Cairo, I’ve heard a lot of things about people trying to loot you for money and ripping you off. A camel ride will cost you an arm and a leg if you don’t make a deal before taking it. An offer of your photo being taken will cost the same if you don’t clarify it to them that you’re not gonna pay EGP100 for an out of focus photo of you and your travel buddy. So we decided that for us to be able to steer ourselves away from all that drama, we won’t speak English for the duration of this tour.

The whole Cairo tour ended in some local restaurant and our tour guide told us to order a “kofta” if we want to have a taste of Egypt’s local food. It wasn’t bad, in fact.. I liked it. I ordered a chicken kofta which basically consist of noodles at the bottom, rice in the middle and a bunch of marinated chicken at the top with some vegetables in it. It’s nice but a very big serving for one person.

At around 5pm, we headed back to our hotel, took a shower and a 2hr power nap before exploring the streets of Cairo at night.

Now, the next blog will be an adventure. :p

PrevPreviousDay 1: Arrive in Cairo
NextDay 2: Exploring the streets of Cairo at nightNext