I went to the airport of Sharjah last Friday night to catch my direct flight to Goa. I left a little too early from my house as legend has it that all roads leading to and from Sharjah can be clogged up with traffic specially at night time. It wasn’t so bad going towards Sharjah anyway on a Friday night. I arrived there at around 8pm whereas my flight departs at 11:10pm. Great! 3 whole hours to kill.

Now the airport of Sharjah is a totally different story, it actually needs to have its own blog entry as there’s just so many things that i could say about it but because I’m too lazy to do it, I’ll make it as short as I can. So here goes, just as the automatic door opens itself for you as you enter the airport you’ll get that big WHOOOOSH of unsanitary air which I think made me vomit a little in my mouth. can you imagine how a grown man would have smelled if he’d eaten too many burgers in a week and went for a mile jog and sweat it all out and then hung his sweat-damped shirt inside an enclosed room with air conditioning right after his jog? It’s worst than what you may be thinking right now. Seriously, it was really bad. On top of all that, it was a total chaos inside the airport. People were just trying to get past through the security check without falling in line so there’s just a big bottle neck of people trying to actually get in the check-in area. You’ll actually get through about 3 bottle necks of people before you reach the boarding gate. I think I’ve said “back of the line b*tch” (of course without the last word) at least 5 times before I finally made it to the boarding gate.

So at the waiting area, I was sitting across a guy while I was on the phone with the boyfriend to kill time and all. Suddenly, this guy in front of me lifted his right leg up a little bit and scratched his balls. Right there, in the middle of all the chaos of an airport. Right in front of about hundreds of passengers – he’s scratching his balls with his right leg slightly higher than his left to give more access and he’s doing it like it’s the most normal thing to scratch next to maybe his head? And it didn’t end there.. oh God it didn’t. Later on, he suddenly put his hand inside his pants and scratched his balls from the inside. HIS HAND INSIDE HIS PANTS!!!! WOW! and as a grand finale, when he finally satisfied himself scratching his goddamn balls – he smelled his hand. I was on the phone with the boyfriend giving him an update of all the things transpiring right in front of me and I just couldn’t stop myself from laughing. It was classic! Only in Sharjah! I do hope so.

Anyway, the Air Arabia plane literally smelled like a worn out cab here in Dubai. Whenever I have those chances of getting myself inside a smelly cab I usually just open the window slightly for survival, so not having that option in a plane was a bit suicidal. I’m sorry, i’m not trying to be a prima donna or anything but I just easily get grossed out whenever I smell something bad. Sans the bad smell, the flight isn’t so bad at all. There’s a wide leg room on each of the seats and the flight was smooth. So yeah, I’d consider flying again with Air Arabia if only they can transfer to a Dubai airport to save me the AED80 cab fare going to Sharjah.

I finally arrived at around 3am in Goa. Goa airport was small and I passed through the immigration and customs check fuss-free. I took a tourist cab from the airport itself going to Calangute district which as per the receipt says was INR780 but I never got anything back from the driver when I gave him INR1000. Anyway, I let it go as I arrived at the place where i’m supposed to meet my friend safely and the driver was very nice as well.

We started our first day at around 11am (the time I woke up :)) and went to one of the beach shacks at Baga beach to have brunch. I told my friend Troy that I’m not a big curry fan so I might skip all the Indian meals but he insisted for me to try the buttered chicken and nan. I did and I liked it! Surprisingly, the food in Goa is extremely different compared to the Indian food here in Dubai. It’s probably because of all the tourists flocking Goa on a yearly basis which is the reason why they have somehow changed the taste a bit.

After the heavy brunch, Christine and I together with the cutest and happiest baby on earth – Cole decided to just lounge by the beach while Drew and Troy went for a walk to take some photographs. I was not able to take much photos during this entire trip because i was too preoccupied with other touristy stuff like people watching, getting a tan or getting high – you know, the normal things a tourist would do in a different country. LOL. and I just can’t get enough of this baby right here: 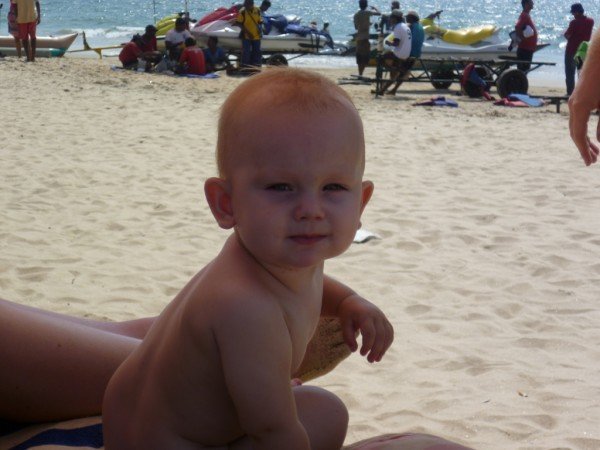 hi! i’m cole and i rule the world with my cuteness!

Babies and I don’t really mix well but how could you not pick up this kid and stare at his blue eyes? That’s what everybody else on the beach were doing actually. Taking photos of this smiling baby, carrying him around and you know just be mesmerized by him. He’s very lucky to have the coolest parents in the world as they just let him do whatever he wants and explore the world by himself, that way he finds out for himself that eating sand off his hands is not really a good thing and he’s smart enough to not do it again. LOL. No seriously, I think that it’s a good way to raise your child. Let them be a baby and just get over the fact that babies are supposed to eat, sleep and cry. You can’t also stop their curiosity of wanting to explore the world around them and might get messy or might slightly hurt themselves in the process of that exploration. I loved the idea! I would definitely be that kind of parent if/when i get myself one of those babies. Now to find a surrogate mother who will go thru the ordeal of the laboring pains…. hmmmm….

Alright so about Baga beach, I must say that I was a bit disappointed as I was expecting Goa to be more crazier and wilder. I can’t help but compare Boracay in the Philippines with it which is a real hip and happening place specially at night. The beach itself at Baga isn’t that really promising either. Alright, I may be biased because I’m a Filipino but you be the judge: 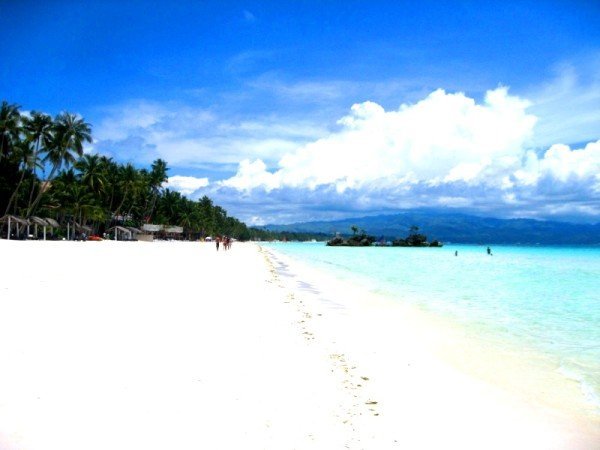 this is boracay with its blue sea and white sand. 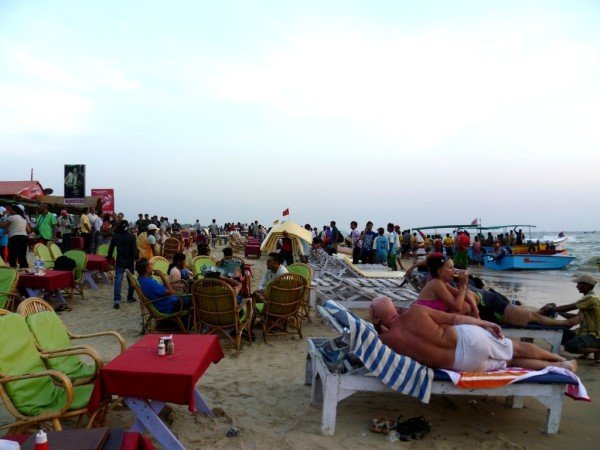 and this is baga… LOL

Yes, yes! Those are two very unfair photos, you might all think that I’m just trying to lure other tourists to go to Boracay instead of Goa because frankly, I am. LOL. Seriously though, Goa and Boracay are incomparable. Both have something different to offer and doesn’t cater to the same kinds of people. Goa is more on a hippier side whereas Boracay is more on resorts and trap-your-tourist-by-selling-something-with-300-percent-commission kind of place. Nightlife is so much better though in Boracay. Beach bars are having a contest of who could play the loudest music right on the beach making all the tourists confused as to which music is actually playing on the bar that they’re at. whereas in Goa, it’s all beach shacks, restaurants and some karaoke which would have worked out for me as i’m a Filipino and karaoke is our forte but I didn’t want to sing that night, I wanted to dance and get drunk. I don’t know why I have associated having a good time with getting drunk, maybe my friends are all right – I am an alcoholic.

Anyhow, after much sun we went on to Shining Star which is probably the best beach shack in the whole stretch of Baga beach. The staff are friendly and nice and automatically babysits Cole as we eat our dinner and drink our beers. We tried feni, the local alcoholic drink of Goans. It’s their version of the Filipinos’ lambanog. Yes, it was strong even if you’ve finished the whole bottle of lemonade to mix it up with. We went back to Kingfisher beers after that. That night, I had prawns for dinner. YUMMY!!!!

After dinner, Troy and I went for some more drinks out on the beach making fun of the people having dinner with stupid evil horns on their head. It was the same night when he gave me the best and the most honest compliment I’ve ever received in my entire life: “you’re not a bitch, your personality shows on your writings” thus the title of this blog entry. Those words coming from Troy – an in-your-face kind of guy, I kinda believed him instantly. LOL. Anyway, we wrapped up the night when it’s already too cold to sit outside without a fur coat on (i knew i should have brought my fur coat with me) and went to get a long sleep for the long day ahead of us. 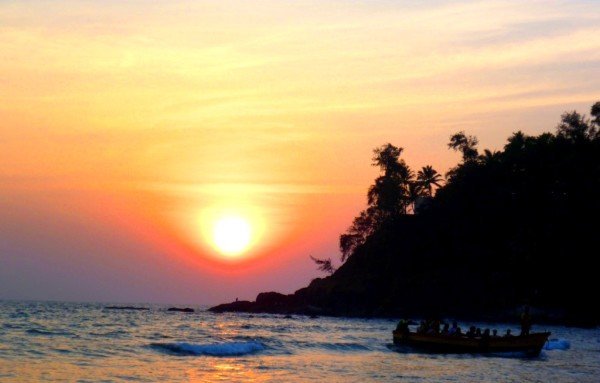