A Unique (and Exotic) Dining Experience in Philadelphia – Marrakesh 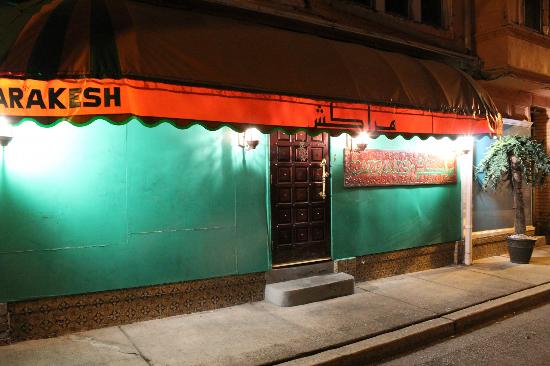 When we were in Philadelphia, both my sister and I were up for something exotic and with the help of my expert researching abilities – I found a restaurant called Marrakesh East Coast’s Premier Moroccan Restaurant or simply known as Marrakesh. It was in a small alley, almost impossible to see and I thought that it must have been closed already as I saw no sign of life from the outside. All it had was a big wooden sign of the name of the restaurant and a heavy, bolted door. We rang the bell and a stout man opened the door, looking a bit bothered by seeing us.

Uhmmmm is… this the Marrakesh restaurant? I asked, hesitantly.
Do you have a reservation? he said in a very confidential, strict tone.
No…. I said, already disappointed that they will kick us out of there which somehow I was hoping they would as this whole place looks a bit dodgy.
Ok, get in. Get in. he replied in such a tone like he was doing us a huge favor.

I walked in and followed him through a small dark hallway, heavily covered with dark rugs and curtains. I seriously felt like I was doing something illegal and I was a bit worried for my own safety. But then, when he opened one of the heavy curtains – a small dining area with low seating welcomed us and some happy and normal-looking people were enjoying a feast on their tables. It was all an act, apparently. Whew!

Well, thank goodness I was brave enough to conquer my fears in the beginning otherwise – I would have missed this gem in Philadelphia. The same stout guy who scared the sh*t out of me at the entrance brought a somewhat fancy bowl with a fancy kettle. He ordered us to put our hands over the bowl and as we did, he poured water on our hands. Afterwards, he ordered us to smell our hands which now smelled of rose petals. He said that it was rose water in the fancy kettle. Sweet! Since we will not be using any utensils during our meal, we needed that ritual to begin our feast.

The restaurant is actually 3 floors, each floors were decorated with low seating areas covered with rugs, colored pillows and very dimly lit. The whole ambiance and decor of the restaurant itself was already a unique experience for us, what we didn’t expect was the quality of the food that awaits us.

Marrakesh serves a set meal so there was no need for us to go through an extensive menu.

First Appetizer:
Three-salad platter which consisted of eggplants in tomato sauce, cucumbers and bell peppers in Mediterranean seasoning and oasis carrots with cucumber.

Second Appetizer:
B’stella which was a layered pie with chicken, assorted nuts, almonds, eggs, parsley and onions, topped with confection sugar and traced with cinnamon. This dish was unbelievable! I have never had this before and it was oh so good! It tasted like a pastry, but it’s not. I can’t describe it other than it was unbelievable! 🙂

First Main Course:
For the first main course, you have the option of a spicy and non-spicy chicken. We chose the latter and got this incredible chicken which was so tender you can slightly poke it and the meat falls off from the bone. I think it was cooked for day before it was served. Hah!

Second Main Course:
We had a choice between a beef and a lamb so we chose the lamb. It was served with almonds and honey and just like the chicken, it was so tender that you don’t really need any utensils to eat it. Just slightly poke around it and the meat will fall off.

Third Main Course:
By this time, we were already full but the couscous topped with vegetables, chick peas and raisins was hard to ignore. It was so very tasty!

Desserts:
And finally for dessert, we had a basket of fresh fruits which was left untouched and we each had a slice of baklava with Moroccan tea.

As we were feasting on our desserts, a belly dancer started to perform encouraging each of us to join her. I was too full that I can’t even stand, let alone do a belly dance. My sister joined her though.

It was an incredible meal. The entire experience was unique and very pleasant – the food, the hospitality, the entertainment and the ambiance were all too good to be true. The whole meal cost us around USD140 for 2 including drinks. The set meal alone costs USD30 per person excluding taxes. Do take note that they do not accept credit cards, good thing that I had cash with me.

I was unable to take photos inside the restaurant as it was too dark that not even my go pro hero4’s nightmode could capture and I was not going to use a flash on my phone since the place was too small and I didn’t want to bother all the other diners inside. So yes, I guess you’ll just have to trust me on this one when you decide to visit it.

PrevPreviousThings To Do in Philadelphia: Witness The Miracle on South 13th Street
NextPhiladelphia In Less Than 24 Hours – Blog Posts and Travel VideoNext